Sharks rule the ocean and usually conjure up terrifying images of the world’s most famous shark, the great white. Most think it’s the biggest of them all, but is it? And is there really a shark that can fit in the palm of your hand? Read on to discover the astonishing true facts about shark sizes.

Would it surprise you to know that on the list of the 500+ shark species by size, well over three-quarters are no bigger than the average adult man and over 100 are less than 60cm long? From small and harmless to huge and scary, there’s certainly no one-size-fits-all where sharks are concerned.

Read on to explore sharks of all sizes, from the massive to the miniscule and everything in between.

The Size of Sharks 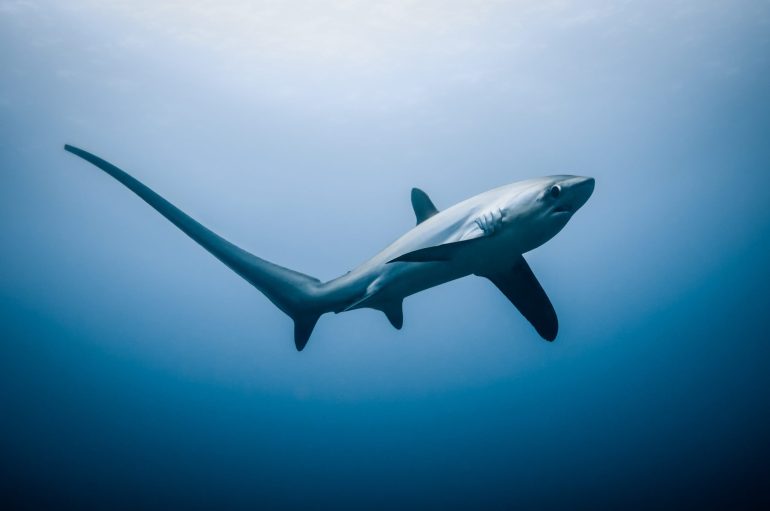 Sharks have bossed the world’s oceans for 450 million years, in fact they are so old they appear in the fossil record before trees existed. Because they have been around for so long, they have adapted perfectly to suit the underwater world in which they live, with both classic sharks and weird and wonderful shark species you may find hard to believe!

The size of sharks varies so dramatically it’s impossible to list every one of the 500+ species here but here are some of the biggest and smallest shark species by size.

Note: We refer to sharks as fish throughout this article. To clear up any confusion on the basis that there are larger species of whale, sharks are officially fish and whales are officially mammals.

If we’re talking immense shark length, look no further than the whale shark. Not only is it the world’s biggest shark, it’s the biggest fish in the ocean. Rhincodon typus is a gentle giant but despite its size, it is not one of the more dangerous sharks. They are found in the open waters of the world’s tropical oceans and even though their mouths open over a metre wide, their teeth are so small they can only filter plankton and small fish. These super-slow swimmers can live to 150 years old. 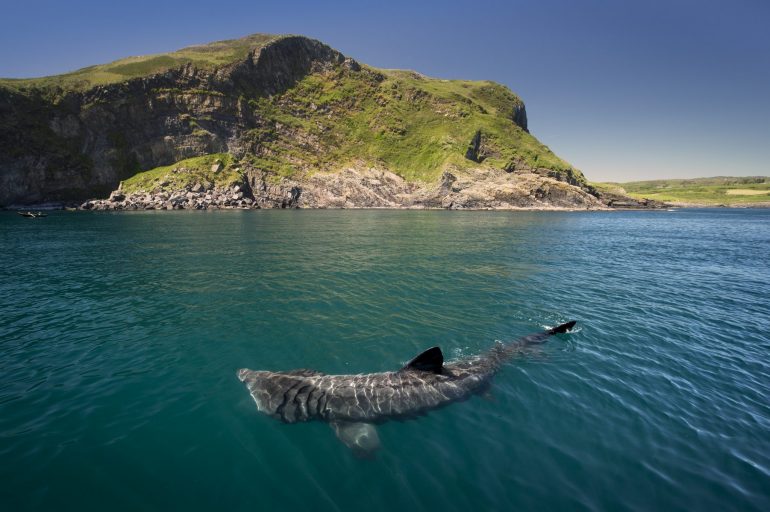 The second largest shark species by size, Cetorhinus maximus is a passive soul with a tiny brain and a huge mouth. Like the whale shark, it filters plankton, krill and small shrimp. They are found in temperate waters all over the world and despite being such slow, lumbering beasts they are highly migratory, known to cover over 5,500 miles a year.

Limited to the North Atlantic and Arctic oceans, the greenland shark (Somniosus microcephalus) is a fascinating creature. One of the largest sharks by size, they are very big and eat bony fish, eels and squid. They have even been observed hunting seals in Canada. However, there is one fact that stands the greenland shark out. It has the longest known lifespan of all vertebrates – scientists believe they can live between 250 and 500 years! 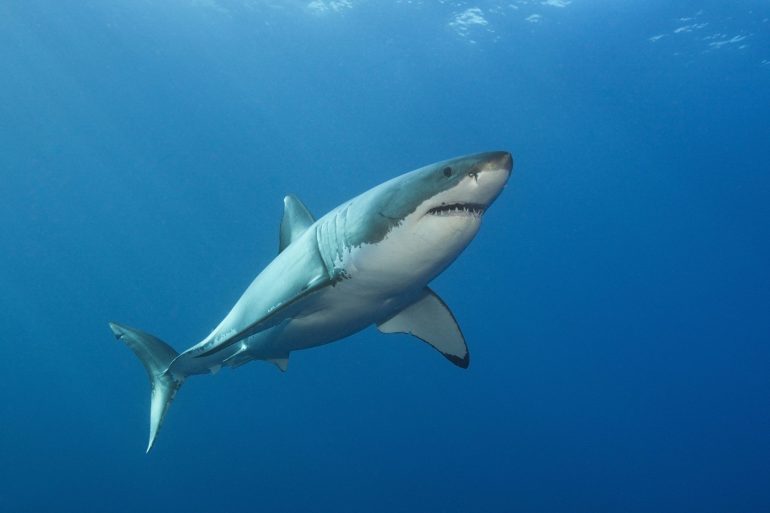 The most famous, ferocious and feared predator in the sea, the great white shark (Photo by Reinhard Dirscherl via Getty Images)

The most famous, ferocious and feared predator in the sea. The great white (Carcharodon carcharias) is not top of the list when it comes to shark length but it’s 300 sharp, serrated teeth pack a serious punch. It won’t be a surprise to learn that ‘Jaws’ is responsible for the largest number of human attacks of any shark. You can find this formidable fish in coastal waters all over the world. In short bursts it can reach 35 mph and can live up to 70 years old.

From the Very Big to the Surprisingly Small 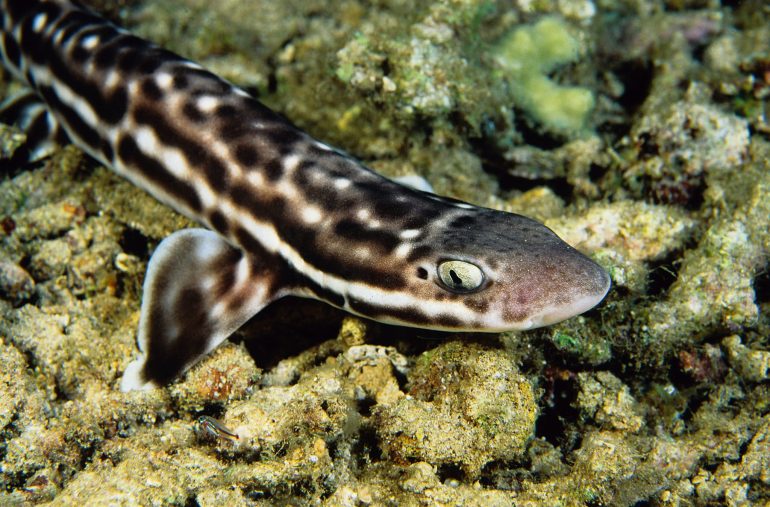 Catshark on the seafloor (Photography by Gerard Soury via Getty Images)

The size of sharks is fascinating and the smallest are as interesting as the largest. It’s harder to determine when the smallest are fully-grown adults and scientists are constantly discovering new shark species. By size though, there are a number of contenders for the prize of the world’s smallest shark.

Cephalurus cephalus looks like a big, gelatinous tadpole with iridescent green eyes and lives off the coast of California.

A dogfish that defies its size by viciously hunting much larger fish in mobs, it can be found from the Gulf of Mexico to the Caribbean Sea.

A nocturnal shark found off the coast of Panama, it was very easy to name. It has elongated feline eyes and swims at depths of around 950m.

Probably the world’s smallest shark, Etmopterus perryi can be found off the coasts of Venezuela and Colombia at depths of around 400m. Very little is known about this king of the mini-sharks apart from the fact that it has very big eyes and looks like it’s smiling. Maybe it knows that where the size of sharks is concerned, it’s at the top – or bottom – of the list.

Sharks of all Shapes and Sizes 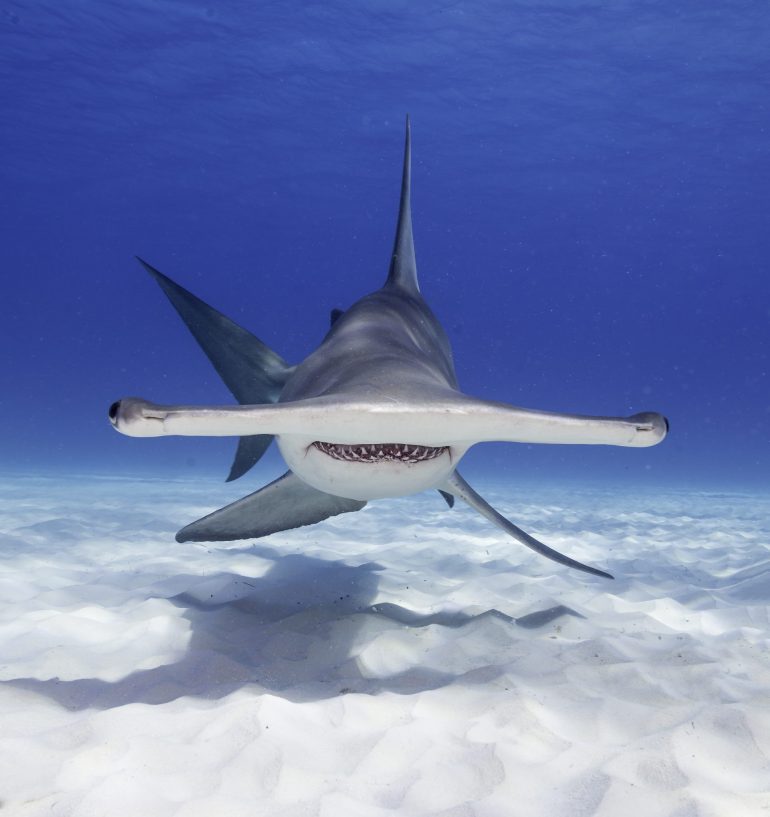 With a history dating back almost half a billion years, sharks have evolved into a wonderfully diverse species, from the famous great white to the fascinating caribbean reef shark, dangerous blue shark or dramatic lemon shark, from tiny ones that fit in the palm of your hand to the behemoths the size of 50 grizzly bears and everything in between!