The name goblin shark conjures up images of a small, sprite-like fish darting around the shallow mangroves of the tropical Pacific. This is anything but. The goblin shark is a giant, ugly slithering monster roaming the deep, a living throwback to when dinosaurs ruled the Earth. It’s not the prettiest shark in the sea but it’s certainly one of the most jaw-dropping, literally!

The goblin shark (Mitsukurina owstoni) is the stuff nightmares are made of, though it’s highly unlikely you’ll ever see one. It was first discovered off the eastern coast of Japan and is the last remaining shark of the family Mitsukurinidae which has remained essentially unchanged for 125 million years. It has been described as a ‘living fossil.’

The goblin shark lives in the open ocean at depths ranging from 100m to 1,300m and has a distinct pinkish hue due to the fact that it’s blood vessels are close to the outer layer of skin. However it’s the jaw and nose of this shark that mark this particular beast as a petrifyingly-unique underwater predator.

In comparison to sharks like the lemon shark and blacktip reef shark, very little is known about the goblin shark. They are rarely observed and almost never filmed. Much of what we do know about them is as a result of accidental capture in fishing nets, but it is one of the most easily-identifiable sharks in the sea.

Mitsukurina owstoni is an interesting, lonely, mysterious character with a fascinating story. 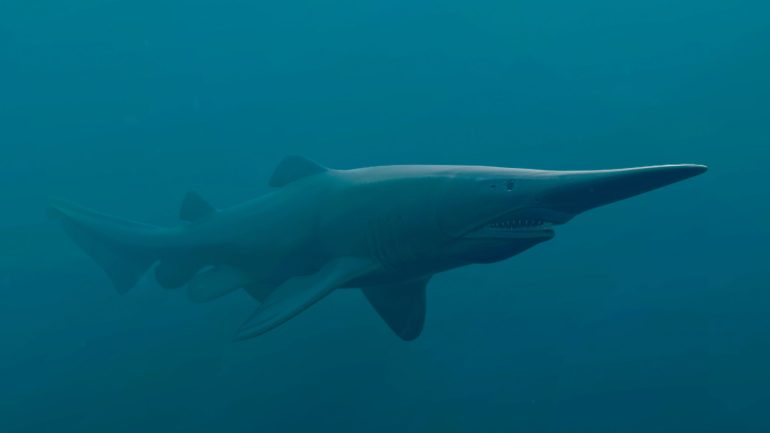 Like many sharks, it gives birth to live young (believed to be around 80cm – 1m in length) and by adulthood the average goblin shark size is 3-4m long. On rare occasions they can reach up to 6m, as evidenced by the capture of a female in 2000.

The goblin shark is one of the only shark species whose teeth are visible when it’s mouth is completely closed. The upper jaw has between 35 and 53 long, narrow, needle-like teeth and the lower has 31 and 62 teeth with three rows of anterior teeth on each side of both jaws. The goblin shark’s body is slim and flabby and it’s fins are very small, leading scientists to believe that it is slow and sluggish through the water.

It’s this sluggishness that may go a long way to explain it’s rather odd physical appearance. The most conspicuously obvious feature is a very long snout called a rostrum which is covered in highly sensitive electroreceptors known as the ampullae of Lorenzini. These pores help it to locate prey in the pitch-dark recesses of the open ocean by sensing electric fields created by other fish, crustaceans and cephalopods.

What was to become Mitsukurina owstoni was first described by American ichthyologist David Starr Jordan in 1898.

He based his description on a young male caught off the coast of Yokohama in Japan. It was acquired by British businessman, yachtsman and wildlife collector Alan Oyston who gave it to Japanese zoologist Professor Kakichi Mitsukuri. Mitsukuri subsequently presented it to Jordan. In honour of the two men, Jordan named it Mitsukurina owstoni.

The name goblin shark comes from the translation of its old Japanese name ‘tenguzame’. A ‘tengu’ is a supernatural creature found in Japanese mythical and religious folklore and is depicted with a protruding snout and a reddish face.

Compared to other creatures, very little is known with any degree of certainty about this particular shark, though there are a number of interesting facts to digest.

How Does the Goblin Shark’s Incredible Jaw Work?

One of the scariest features of this shark is it’s extendable jaw. When food gets within range, the shark literally launches its jaws forwards using a double set of ligaments and grabs it’s unfortunate prey. When the shark has finished eating, the jaws retract back into its mouth.

What do Goblin Sharks Eat?

The goblin shark feeds mainly on small fish such as rattails and dragonfish but it will also eat cephalopods including squid, cuttlefish and octopus and crustaceans like crab, lobster, woodlice and crayfish.

Where do Goblin Sharks Live?

The goblin shark habitat is relatively widespread. Most of the reported sightings have been off the eastern coast of Japan but it has been seen in the western Atlantic from the northern coast of the Gulf of Mexico down to the southern tip of Brazil and in the eastern Atlantic in the waters around France, Portugal, Madeira and across to west Africa. It has also been seen off South Africa, Mozambique, Taiwan, Australia and New Zealand and will mostly be found along outer continental shelves and seamounts at depths of between 270m and 1,000m. Goblin sharks have been caught at a depth of 1,300m and a tooth was found stuck in an underwater cable at a depth of 1,370m.

Because the goblin shark lives in unfished environments and given the extreme depths in which it lives, they generally have very little contact with humans and aren’t therefore considered to be one of the most dangerous shark species. A few have been caught and added to public aquariums but none have lasted longer than a few days. It’s a big, predatory shark so it has the potential to be dangerous if spooked but there are no recorded examples of attacks.

How Long do Goblin Sharks Live?

Unfortunately there is very little available data around growth and aging of goblin sharks but based on research, Mitsukurina owstoni males mature at around the age of 16 and it is believed they can live up to 60 years.