The frilled shark has been swimming the depths of the oceans for 100 million years. With the head of a snake and the body of an eel, it doesn’t look like a shark at all but when it opens its mouth it’s as terrifying as any creature in the sea. Read on to discover more about the frilled shark, its size and habitat and some extraordinary facts about one of the ocean’s strangest - and oldest - creatures.

Even though they’ve been on the planet since the time of the dinosaurs, very little is known about the frilled shark.

Rarely observed and almost never filmed, it was named Chlamydoselachus anguineus by American zoologist Samuel Garman in 1884 in an article called ‘An Extraordinary Shark.’ Extraordinary it most certainly is…

Chlamydoselachus anguineus, from the Greek chlamy (‘frill’), selachus (‘shark’) and anguineus, Latin for ‘eel-like’, is described as a living fossil. It hasn’t ostensibly changed appearance for millions of years.

By any criteria in which sharks are judged, the frilled shark is a strange looking, reptilian character that swims serpent-like through the sea. It’s common name is derived from the six pairs of gill slits that each have a red frilly margin but its primary weapon is it’s petrifying teeth. Its huge mouth is home to around 300 trident-shaped teeth, each of which has three needle-sharp hooks. It is said that the phrase ‘death by a thousand cuts’ was invented for this marine menace’s unfortunate prey. 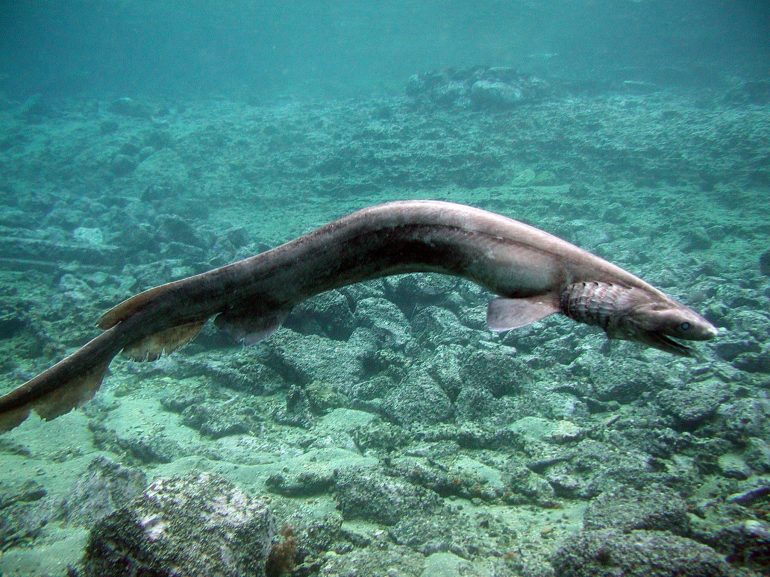 A deep-water, naturally buoyant shark that stealthily patrols the cold waters of the world’s oceans, the frilled shark’s size is typically around 40cm long at birth. It’s not known for certain but scientists think that due to its deep water habitat slowing its metabolic processes, the gestation period of the frilled shark can be up to three-and-a-half years. It’s the longest gestation period of any animal, land or sea, and almost twice that of the African elephant. At maturity, males measure between 95cm to 1.6m and females around 1.35m. The largest frilled shark male on record measured 1.7m and the largest female was slightly larger at 2m. Its colouring ranges from chocolatey-brown to dark grey depending on where they are found.

Chlamydoselachus anguineus is perfectly adapted to life in the abyss. It  has a cartilaginous skeleton, a long body cavity and a huge liver full of low-density oils and hydrocarbons so it can control its buoyancy. It is usually found at depths between 50 – 200m but it has been known to roam as deep as 1,500m looking for food.

Widely but very patchily distributed, the frilled shark’s habitat can be found from northern Norway down to Ireland, France, Morocco and Namibia in the eastern Atlantic, and in the waters of New England, Georgia and Suriname in the western Atlantic.

In the western Pacific, it can be found from Japan down to southeastern Australia, Tasmania and New Zealand and in the eastern Pacific the frilled shark occurs near Hawaii, California and Chile’s northern coast. 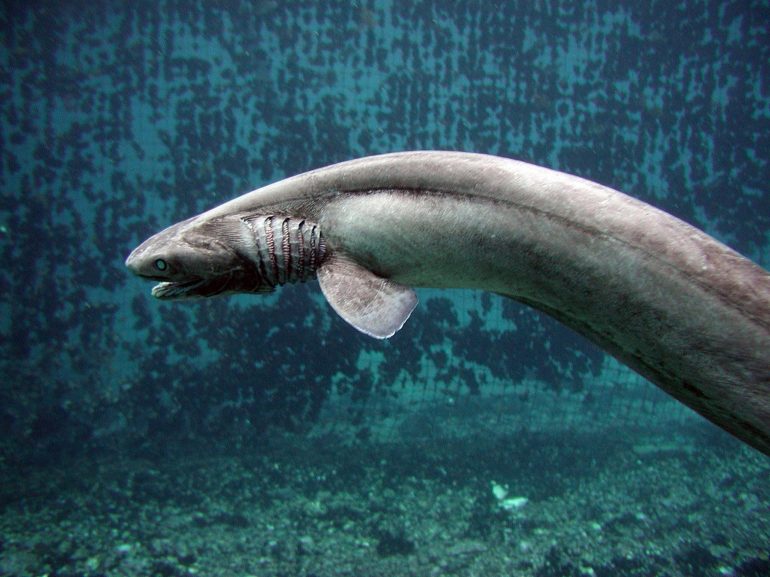 This is one of the strangest sharks in the ocean! Here are the best frilled shark facts.

What Do Frilled Sharks Eat?

Like many sharks, the frilled shark feeds mainly on squid, bony fish and other, smaller sharks. Because they have such long jaws, it’s thought they can eat prey up to half their own body length.

Humans and frilled sharks very rarely encounter each other and there are no reported human attacks. Back in 2015, a fishing net snagged one in Australia and the fisherman who accidentally caught it said, ‘the head on it was like something out of a horror movie. It was quite horrific looking!’

How Long Do Frilled Sharks Live?

With a distinct lack of data it is hard to know for sure but scientists think they can live up to around 25 years of age.

Are There any Frilled Sharks in Captivity?

Is the Frilled Shark a Real-Life Sea Serpent?

It’s entirely possible that ever since humans have explored the seas and given its widespread distribution, the frilled shark may well be the sea serpent present in many ancient mythologies such as Tiamat, the primordial goddess of the sea in Mesopotamian mythology; Leviathan, the sea serpent in Hebrew mythology; Hydra the serpentine water monster from Greek and Roman mythology and Jörmungandr, the world serpent from Norse mythology.