Sharks are the most successful animals that have ever lived. They have evolved over the course of almost half a billion years and one of the reasons for this success is their ability to adapt to changes in temperature, topography, food sources and where they live and breed. Shark habitats are as varied as sharks themselves and where some of them call home might just surprise you...

From stunning coral reefs to the most frigid, inhospitable waters on the planet, shark habitats encompass the world’s oceans as well as freshwater lakes and even rivers. Read on to find out the answer to the question ‘where do sharks live’.

Where Do Sharks Live? 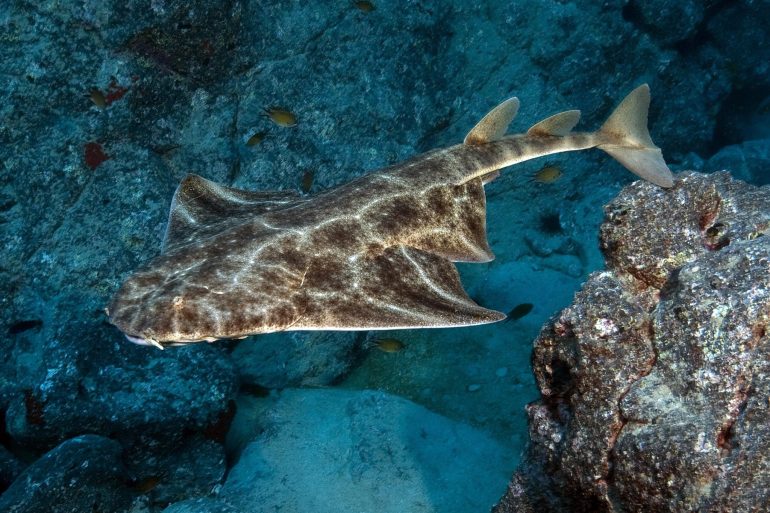 Angelshark swimming through the reef (Photo via Getty Images)

Shark habitats are as different and as fascinating as the 500+ species of shark that swim in the sea and you’ll find them everywhere.

One of the last unexplored regions of the planet and the least understood of all shark habitats. The deep ocean is home to some of the ocean’s most fascinating and strange looking sharks, many of whom call home between 1,000 and 2,000m below the surface. Deep ocean sharks include: Goblin shark | Frill shark | Ninja lanternshark | Cookiecutter shark | Greenland shark

Home to over 25% of the planet’s sea life, reef sharks are vitally important in maintaining the delicate balance of some of the world’s most colourful and beautiful marine ecosystems. They are usually curious without being aggressive and eat tropical fish, crab, lobster and squid. Coral reef sharks include: Blacktip reef shark | Caribbean reef shark | Zebra shark | Gray reef shark

One of the more unusual answers to the question ‘where do sharks live’, these are the shallow regions comprising most of the continental shelf. They support a wide range of marine life including crustaceans and small fish and are perfect hunting grounds for the ambush predators. Sandy plains sharks include: Angel shark | Hammerhead shark | Saw shark

An estuary is a body of water where the ocean meets a river so the water is described as brackish, a mix of saltwater and freshwater. One of the more common shark habitats in estuaries are mangrove swamps which are usually home to crabs, shrimp and small fish, offering a steady diet for juvenile sharks. The thick mangrove roots also offer a safe environment for newborn sharks to hide from predators. Estuary sharks include: Angel shark | Lemon shark | Sandbar shark | Tiger shark | Atlantic sharpnose shark

What Oceans do Sharks live in? 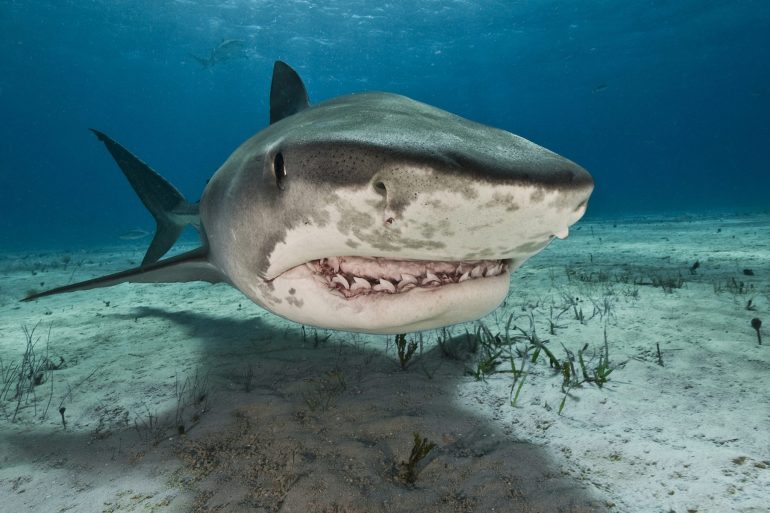 Sharks inhabit all five of the world’s oceans – Atlantic, Pacific, Indian, Arctic and Southern – and are found in shallow coastal waters to the deepest, darkest and coldest parts of the open seas. They are common down to depths of around 2,000m but it is incredibly rare to find sharks below 3,000m. The deepest reported shark was a Portuguese dogfish recorded at 3,700m, or about 2.3 miles down.

While certain shark species prefer specific marine environments – tigers, hammerheads and bull sharks prefer tropical waters, the Greenland and goblin shark opt for cold water and the mako, thresher and basking sharks have a preference for temperate waters – sharks aren’t territorial by nature so they will frequently change their habitat in search of food.

Some sharks migrate thousands of miles each year, including one whale shark named Anne that was tagged and tracked over 841 days from the coast of Panama to the Marianas Trench south of Japan (the deepest oceanic trench on Earth), a distance of over 12,500 miles.

Can Sharks live in Freshwater? 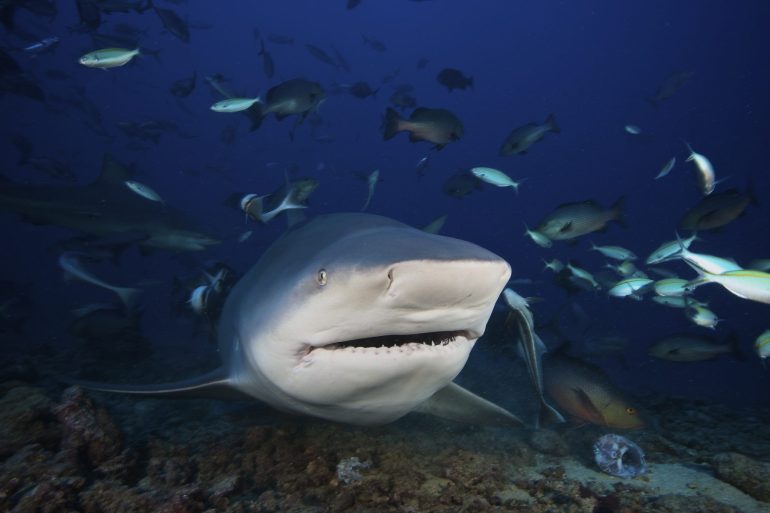 The vast majority of shark species live in full-strength saltwater. There are a few coastal sharks that can survive in brackish water and these shark habitats are used by young pups as nursery grounds. However there are only a few sharks – known as diadromous – who can survive for any length of time in freshwater.

The bull shark is the best known diadromous shark and it has adapted to a wide range of water salinity. There are large populations of bull sharks in Australia’s major rivers and, amazingly, several were sighted swimming up the flooded streets of Brisbane during the Queensland floods of 2011. They have also been found over 2,000 miles up the Amazon and 1,700 miles up the Mississippi River.

The speartooth shark has been caught 60 miles up the Adelaide River in Australia but there are no populations living in landlocked rivers, there will always be a route back to the ocean.

Where do Great White Sharks live? 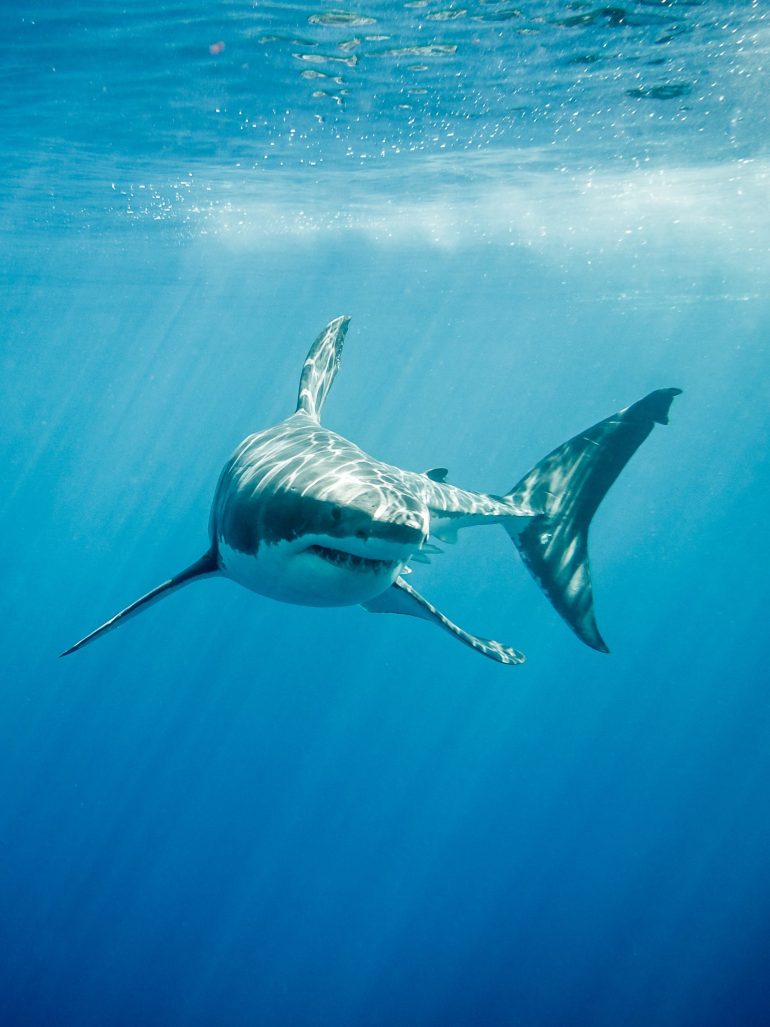 While Carcharodon carcharias – better known as the great white shark – is the most famous apex predator in the sea, surprisingly little is understood of its behaviour and lifestyle.

What we do know of the great white shark habitat is that they live in coastal and offshore waters with temperatures broadly ranging from 12 – 24°C that are highly productive – that is with a rich source of marine mammals and fish.

The biggest concentrations of the great white are off the coasts of the northeastern and western United States, the Mediterranean Sea, off the southern Australian coast, northern Japan and Chile. Marine biologists believe the densest known great white shark habitat is around Dyer Island, the southernmost tip of South Africa, known locally as Shark Alley. 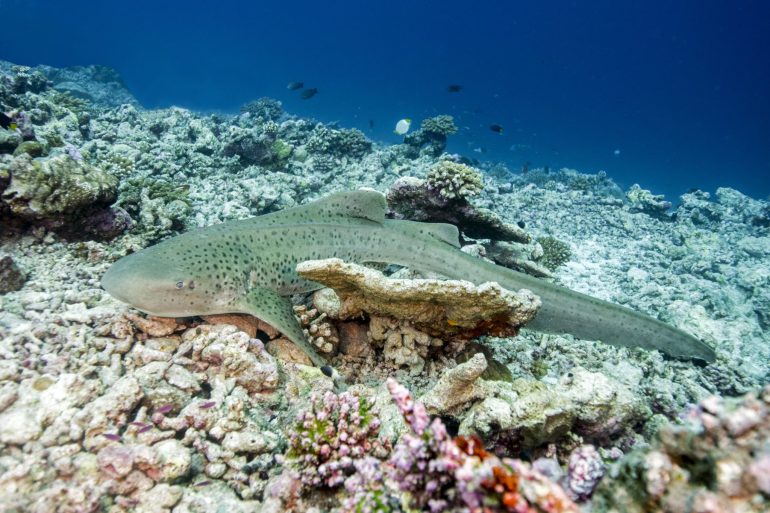 Where do sharks live? The simple answer is everywhere, in all oceans, from the shallows to the deep, close to the shore and in the open ocean and if you look closely enough, you can even find them in Brisbane’s main shopping street!