In many ways, the blue shark is the perfect predator. Sleek and agile, almost torpedo-like, they are remarkably evolved swimmers and agile hunters with unique colouring that makes them almost impossible to spot. This guide will provide a quick and simple overview of this fascinating fish, including the blue shark size, where it lives and some extraordinary blue shark facts.

The blue shark was named Prionace glauca by naturalist Carl Linnaeus in 1758. The first name is Greek in origin, from the word prion meaning ‘saw’ and akis meaning ‘point’ referring to its conical nose and teeth. Glauca is Latin for ‘bluish-grey.’

Powerful yet graceful through the water with an ability to pursue prey over great distances, the blue shark’s colouring is both its stand-out feature and its principal weapon. It has a dazzling deep blue colouring on the top of its body, metallic, almost shiny blue flanks and a white underside. This is known as ‘countershading’, an evolutionary camouflage trick that works with the complex light and shade of the ocean concealing the shark from predators and enabling it to sneak up on its prey.

One of the most engrossing facts about the blue shark is that they travel in large, same-sex groups. For the majority of the year the males and females live completely separate lives, only coming together for short periods to mate.

A curious creature living in hierarchies similar to wolf packs (from where they have earned the nickname ‘Wolves of the Sea’), the blue shark is one of the ocean’s most elegant and interesting sharks. 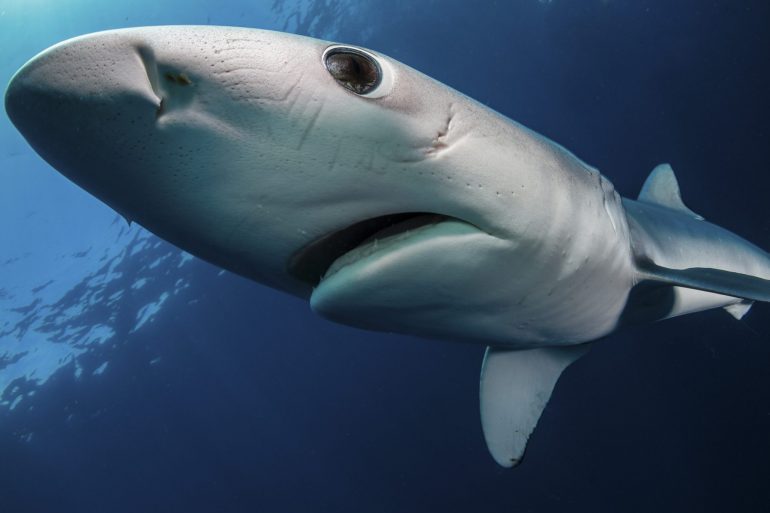 The blue shark gives birth to live young and they deliver between four and 135 pups per litter after a gestation period of nine months to a year. They are around 35 – 50cm long at birth and at maturity, males are between 1.8 and 2.2m long while females can grow to over 3m.

There is an oft-repeated claim of a blue shark measuring over 6m but no shark even close to this size has ever been officially documented. It is believed that the blue shark lives to around 20 years of age.

Blue Sharks in the UK 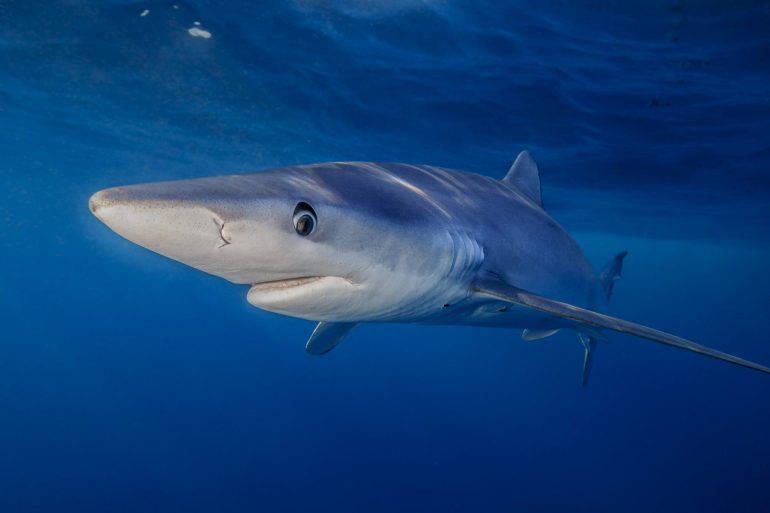 The blue shark in the UK is an ever-present visitor over the summer months. They are usually found at least 10 miles offshore and as part of their north-south migratory patterns in the north-eastern Atlantic, the blue shark will visit the waters off the coasts of Cornwall and Dorset and occasionally the south coast of the Republic of Ireland.

Off the Pembrokeshire coastline in Wales, the water is very deep and offers the vertical range that suits the blue. They gather in groups of up to eight sharks and because they’re naturally inquisitive, they will often come to the surface and playfully bump into the charter boats. In fact, this is one of the best places in which to see the blue shark in the UK. 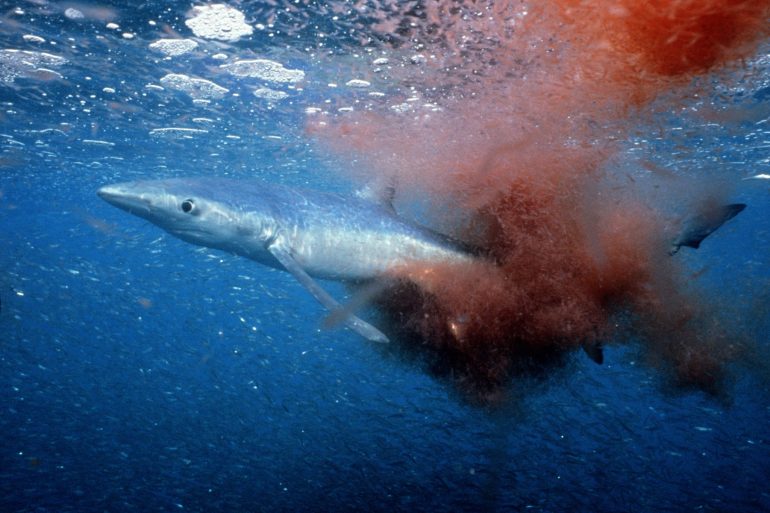 Thanks to its stunning colouring and long conical snout, the blue shark is one of the most distinctive sharks in the ocean and scientists have studied them for many years. Here are the best blue shark facts!

What Do Blue Sharks Eat?

The blue shark’s diet consists mainly of squid but they’ll eat small sharks, bony fish like anchovy, herring, sardines and hake and crustaceans such as lobster, crab and shrimp. On occasion they’ll eat sea birds and they have been known to steal cod from trawler nets.

Where Do Blue Sharks Live?

The blue shark is the most migratory of all shark species and they make a clockwise migration pattern around the world’s oceans. They will regularly cover distances of close to 6,000 miles each year, equivalent to the distance between London and Tokyo! Preferring deeper, cool water, the blue shark is the most geographical disparate of all sharks and can be found off the coasts of every continent apart from Antarctica, from the waters around Norway all the way down to Chile at the southern tip of South America and everywhere in between.

Because of the blue shark’s size and speed they should always be approached with extreme caution. According to the International Shark Attack Files, the blue shark has been responsible for 13 unprovoked attacks. Three attacks have resulted from air and sea disasters and there are unconfirmed accounts of the blue attacking sailors shipwrecked in the open ocean.

Why Do Blue Sharks Bite Each Other?

Contrary to popular belief, it’s not just the great white shark that has Air Jaws-style skills, the blue shark has also been known to balletically leap out of the water when chasing prey. Despite the fact that, like other sharks they don’t have bones but instead a cartilaginous skeleton that helps to produce the power needed for these amazing feats of athleticism. 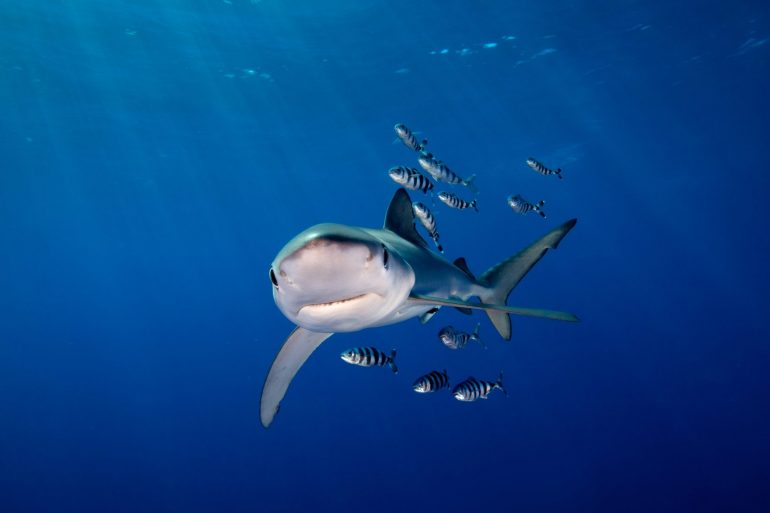 The blue shark is known as peshkagen in Albanian, sinihai in Finnish, pas modrulj in Portuguese, canavar balik in Turkish, yoshikirizame in Japanese and Cá Mập xanh in Vietnamese.