The blacktip reef shark is an ocean-going beauty queen. An elegant shark with black tips on its fins, this classically sleek shark is at home in the stunning coral reefs of the Indian and Pacific oceans.

The blacktip reef shark was originally described by French naturalists Jean René Constant Quoy and Joseph Paul Gaimard in 1824 and named it Carcharhinus melanopterus, from the Greek melas, which means ‘black’ and pteron which means ‘wing’ or ‘fin’.

Interestingly, this is not the only shark with black tips. The blacktip shark (Carcharhinus limbatus) also has black-tipped fins (but not on its pelvic fin) and the grey reef shark (Carcharhinus amblyrhynchos) has a black margin on the trailing edge of its caudal fin, or tail.

But the story of the blacktip reef shark is so much more than just the shark with black tips. Like many of the ocean’s predators, they rely on their unique colouring to source food and their unique markings provide camouflage from both above and below. Their dark backs mean they blend in with the dim seafloor and a white underside allows them to conceal themselves nicely with the bright surface of the ocean.

Not only are they distinctly coloured, but blacktip reef sharks are also somewhat contradictory. On the one hand they are social, inquisitive homebodies who are timid and skittish, but on the other they are fast, pursuit predators with very sharp teeth. They can often be seen in shallow waters swimming with their dorsal fin exposed above the surface, the classic shark cliché!

In fact they are one of the ocean’s most interesting characters. 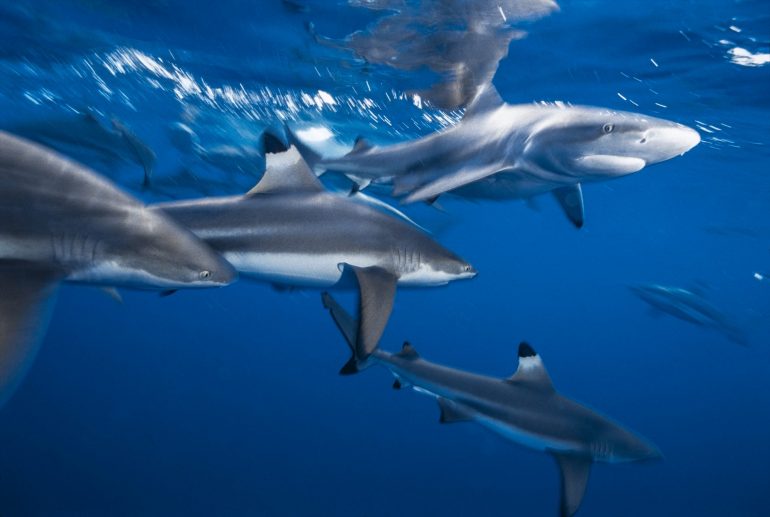 The blacktip reef shark is viviparous, meaning it gives birth to live pups in litters of between two and ten. If there are no available males, the females are even able to reproduce asexually. At birth, this size is between 30cm and 50cm and scientists believe the gestation period varies between 10 and 16 months dependent on the temperature of the water.

Fully grown, the average blacktip reef shark is around 1.6m in length. On occasion they can get as long as 1.8 or even two metres and the maximum weight recorded of a black tip reef shark by the International Game Fish Association is 13.6kg. 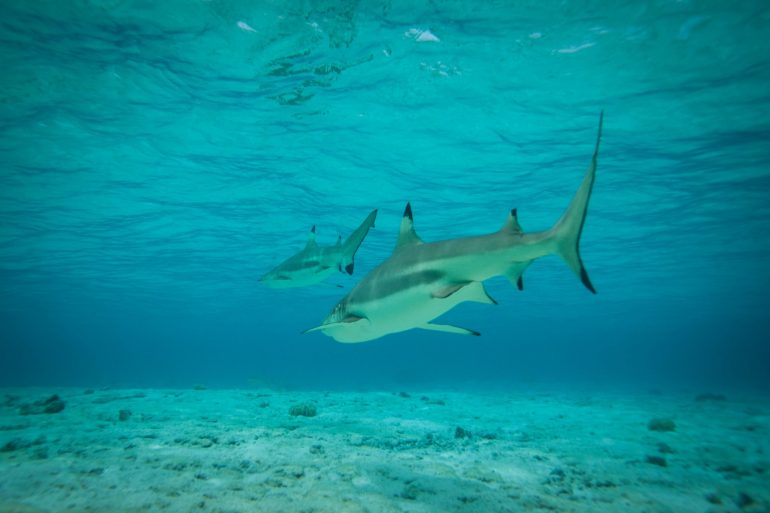 Blacktip reef sharks in the lagoon of the island of Bora Bora. (Photo by Gregory Boissy via Getty Images)

When they’re born, the adult females will leave their young in shallow coastal waters to keep them away from predators and even as adults they like the familiarity of waters they know. Researchers who studied a population of blacktip reef sharks off Palmyra Atoll in the central Pacific found them living in an area of just 0.2 square miles, among the smallest home range of any species of shark. More generally, the average daily active space for this shark is something in the region of six square miles.

They favour clear, warm inshore waters of the tropical and subtropical Indo-Pacific near coral reefs, estuaries, mangroves, bays and close to beaches and river mouths. Younger sharks prefer shallow sandy flats while the older sharks prefer the waters around reef ledges and drop-offs.

In the Indian Ocean there are schools of blacktip reef sharks from the tip of South Africa all the way up to the Red Sea (including around the waters of Mauritius, the Seychelles and Madagascar). There are also populations along the coast of the Indian subcontinent all the way down to southeast Asia.  In the Pacific, the shark with black tips can be found from southern China all the way down to northern Australia and as far east as the Hawaiian islands. 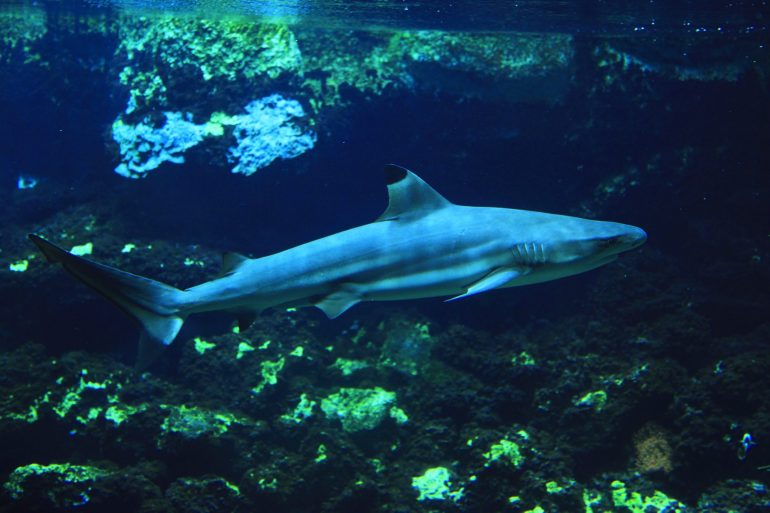 Because this is a relatively small, non-aggressive shark which stays close to the shore, scientists have been studying them at close quarters for many years so they know a lot about their size and habitat.

What Do Blacktip Reef Sharks Eat?

The blacktip reef shark is an athletic and energetic hunter and feeds primarily on reef fish such as grouper, mullet, surgeonfish and wrasse. They’ll also eat squid, octopus and small crustaceans like shrimp, cuttlefish and mantis shrimp and on rare occasions they’ll eat sea snakes and even unfortunate seabird chicks who have fallen out of their nests.

The lifespan of the blacktip reef shark is somewhere around 13-15 years.

Like all ocean-going predators, this shark commands a great deal of respect. However, they’re relatively timid for sharks and get spooked easily. They’re also quite curious creatures and will slowly approach divers and waders. The attack rate on humans is exceedingly low and the International Shark Attack File has recorded only 11 unprovoked blacktip reef shark bites since 1959.

One of the most fascinating of the blacktip reef shark facts is their camaraderie and how social they are. They are commonly found in large groups with a clearly defined hierarchy, usually based on size. One theory for why they build such large groups is because they are timid towards other predators and work on a philosophy of ‘power in numbers.’

The simple answer to that question is no, but they come quite close! Scientists can’t say for sure why they do it (they think it’s something to do with hunting) but they have been observed leaping completely out of the water, rotating three or four times in the air and falling back into the water. If you’re anywhere near the Great Barrier Reef off the coast of Australia, this seems to be the most common place to see them ‘fly’. 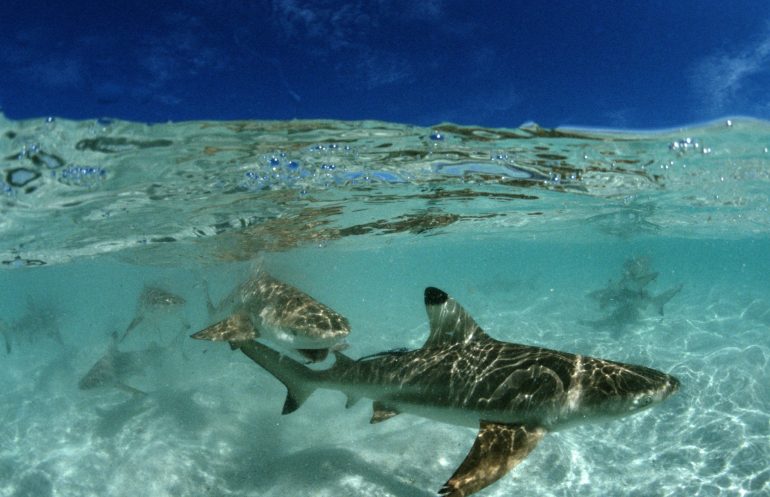 And just for fun, the blacktip reef shark is known as requin á pointe noir in French, tiburon de puntas negras in Spanish, tsumaguro in Japanese, swartvin-rifhaai in Afrikaans, chalarm hoo-dum in Thai and cá mâp vây den in Vietnamese.