The world of the lemon shark is fascinating, so much so that it has been described as a scientific superstar and is instantly recognisable for its two dorsal fins and distinct yellow hue.

The lemon shark (Negaprion brevirostris) was named by Cuban zoologist Felipe Poey in 1868 for a very simple reason – it has yellowish-brown skin on the dorsal (upper) side and lighter yellow colouring on the ventral (lower) side which provides perfect camouflage when foraging for food in sandy, in-shore waters.

But the story of this shark goes way beyond the name. Its stocky, tough-guy image means it’s well-respected as a powerful underwater predator and puts it near the top of the food chain.

However, that’s just part of what makes it such a complex, charismatic member of the Carcharhinidae family. Lemon sharks have personalities, they use body language, they can learn tricks and are incredibly social. In fact this shark is one of the ocean’s most interesting characters. 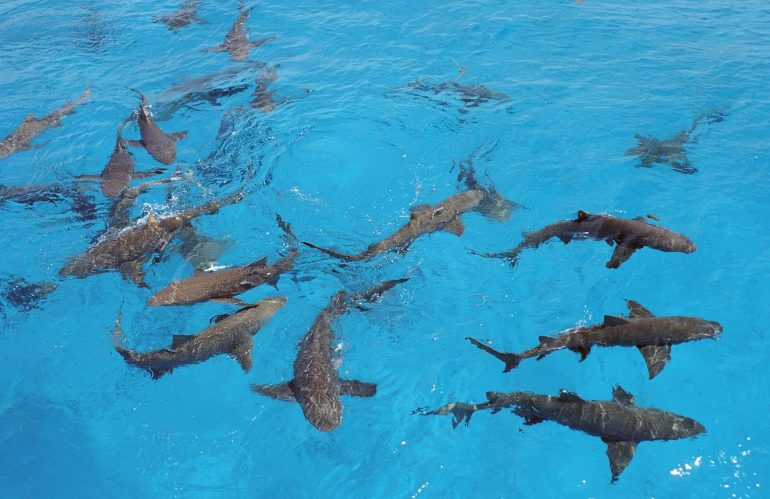 The lemon shark is viviparous, meaning it gives birth to live young who have to fend for themselves from the moment they’re born and at birth they are somewhere between 50 and 60cm long. The adult females gestate for up to a year and the size of a litter can be anywhere from three or four up to 16 or 17 pups.

Fully grown, an adult lemon shark size is between 2.4m and 3.1m long and they weigh roughly 100kg. The longest recorded lemon shark was 3.43m and the heaviest ever recorded was a staggering 183.7kg. By way of comparison, that is roughly the weight of a blue whale’s heart! 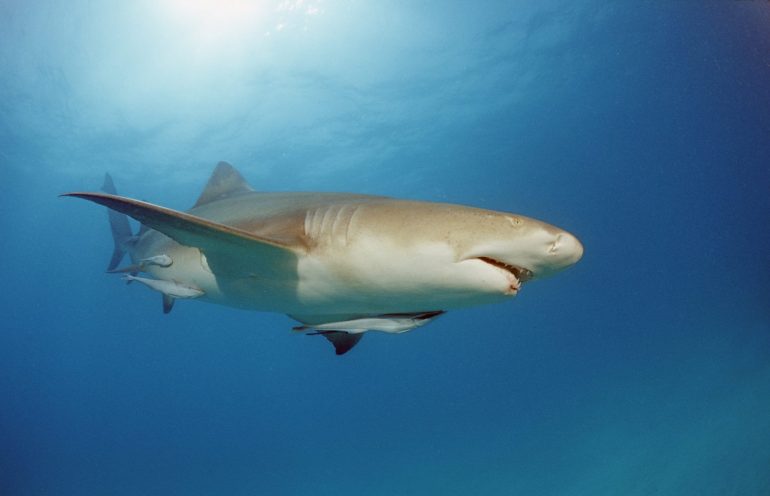 The perfect lemon shark habitat is the shallow, tropical and subtropical waters of coral reefs, bays, mangrove forests and river mouths. They will venture out into the open ocean during migrations and on occasion they have been found in freshwater river mouths but won’t travel far and will always return to sea waters.

In geographical terms, their habitat ranges from the inshore waters of the northwest Atlantic as far north as New Jersey on the eastern seaboard of the United States all the way down to southern Brazil in the tropical western Atlantic. They are also found in the eastern Atlantic off the west African coasts of Senegal and the Ivory Coast.

There are also lemon shark habitats in the north Pacific from the Gulf of California and Baja California, down past the coastal waters of Guatemala, El Salvador, Costa Rica and Panama and as far south as Ecuador and the northern tip of Peru.

One of the most fascinating elements of their behaviour is that they become very quickly attached to specific locations. For the first three or four years they will stay in a very small area of mangrove – perhaps only a few square miles – and will never wilfully stray too far. In fact, if you move a baby lemon shark up the coast and release it into a new area, it will swim back to its ‘home’ mangrove.

There’s always an exception to the rule and this shark no different. Every winter, a school of young lemon sharks spend their time in an estuary at Cape Canaveral in Florida. Then, from February to April they swim hundreds of miles north to estuaries off the coasts of Georgia and South Carolina. Scientists think they migrate every year to stay within temperate waters.

As they get older, their habitat expands. Fitted with satellite tags, scientists have tracked them moving thousands of miles but amazingly, when it’s time for the females to give birth, they come home.

In a study conducted between 1993 and 2012, scientists from the Bimini Biological Field Station Foundation in the Bahamas tagged new-born lemon sharks and then waited very patiently for them to return. Between fourteen and seventeen years later, six sharks returned to the exact place they were born to give birth. It was the very first time that this type of behaviour, known as natal philopatry, had been observed directly in sharks.

However, the big mystery is how they manage it. One theory is that when they are young, they effectively imprint the specific pattern of Earth’s magnetic field on their brains and use it as a kind of inbuilt sat-nav so they can find their way home after so long. 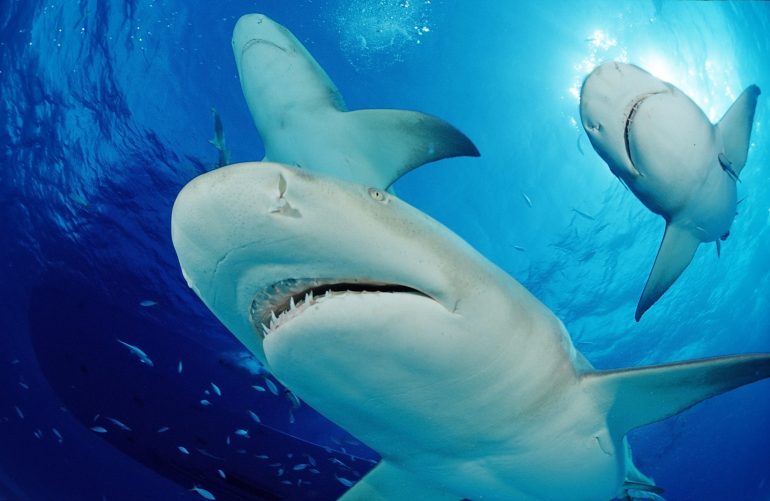 Because they’ve been closely studied, scientists have had the opportunity to observe more of their behaviour than almost any shark in the ocean.

What do Lemon Sharks Eat?

The majority of the lemon shark’s diet is made up of bony fish like catfish, mullet, stingrays, guitarfish and cowfish and crustaceans such as crabs and crayfish. Because they hunt in shallow waters, on occasion they’ll catch and eat sea birds and they have been known to eat other, smaller species of shark. In order to hunt, they have electroreceptors in their heads that can detect electrical pulses emitted by their potential prey as they scour the bottom of the sea. Their yellow colouring allows them to camouflage themselves against the sand, making hunting easier.

How Long do Lemon Sharks Live?

It’s impossible to know for sure but scientists think that the lifespan of lemon sharks is between 25 and 30 years.

Lemon sharks are powerful ocean predators but can also be surprisingly gentle. In general, they actively avoid conflict. Like many animals both on land and in the sea, they will react to being spooked. The International Shark Attack File lists just 10 unprovoked lemon shark bites, none of which proved fatal.

They are, in fact they prefer to live in groups. Being in groups offers them benefits such as enhanced communication, pack hunting, courtship and protection and younger lemon sharks will associate with the older members of the group to learn about habitat, hunting and survival techniques.

In aquariums and controlled laboratories, scientists have observed lemon sharks making friends, spending time with other sharks they’ve met rather than new sharks added to the group. There is also some evidence that they can learn simple tricks. They have been observed mimicking the actions of others who had been trained to access food rewards. This is the type of learned behaviour seen in animals like dogs, monkeys and birds but not in sharks. 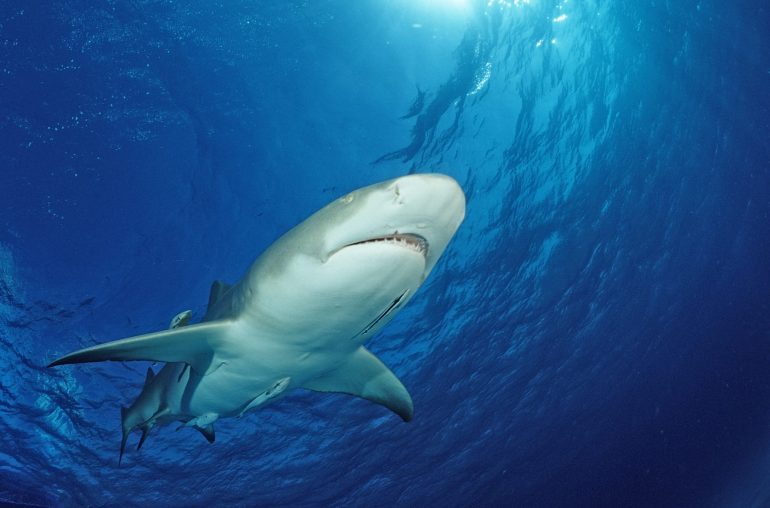 The lemon shark is known as requin citron in French, zitronenhai in German, squalo limone in Italian, tiburon galano in Spanish and citronhaj in Swedish.