One of the largest and most sophisticated apex predators in the reef ecosystem, the Caribbean reef shark is a majestically sleek shark in the classic mould but they are sneaky little scamps! Read on to find out why.

The Caribbean reef shark (Carcharhinus perezi) was first described by Cuban zoologist Felipe Poey in 1876. It is one of the more inquisitive of the requiem sharks and a popular visitor to dive sites where – fortunately – it sees humans as deliverers of food rather than food themselves.

While the shark is uniquely coloured – white to light yellow on the ventral side and greyish-brown to dark grey on the dorsal side – the Caribbean reef shark’s size and shape makes it hard to distinguish from similar requiem sharks such as the dusky shark, the sandbar shark and the blacktip shark.

At the same time ferocious, friendly and fascinating, the Caribbean reef shark sits at the top of the food chain and is one of the ocean’s most interesting and intelligent characters. 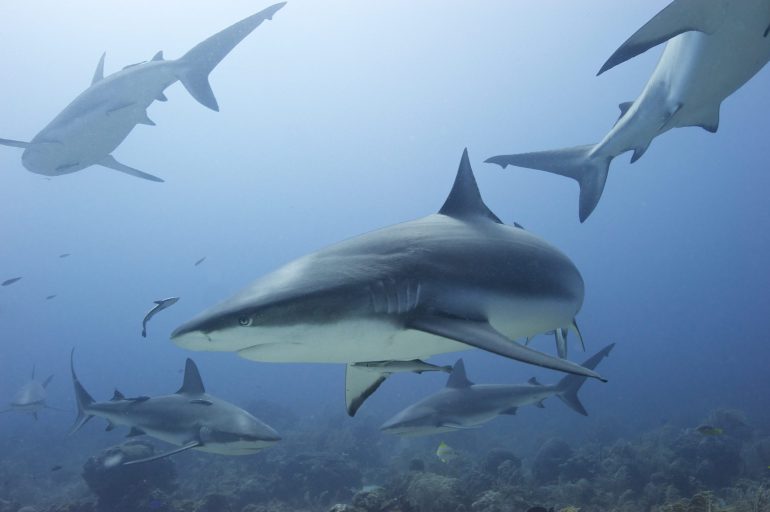 The Caribbean reef shark is viviparous, meaning the females give birth to live young in litters of around 4-6 pups after a gestation period of around 12 months. At birth they are around 50-70cm and the young will stay in shallow waters for the first few years of their lives until they’re confident – and large – enough to fend for themselves.

Carcharhinus perezi populates the outer edges and drop-offs of the shallow coral and rocky reefs throughout the Caribbean and the northern Gulf of Mexico. It will usually stay at depths of around 30m.

As the name would suggest, this is the most abundant shark in the Caribbean. They have been found in the western Atlantic as high as North Carolina (although it’s rare to find them much further north than the Florida Keys) but they’re most common through the Caribbean islands down as far south as Colombia, Venezuela and Brazil. 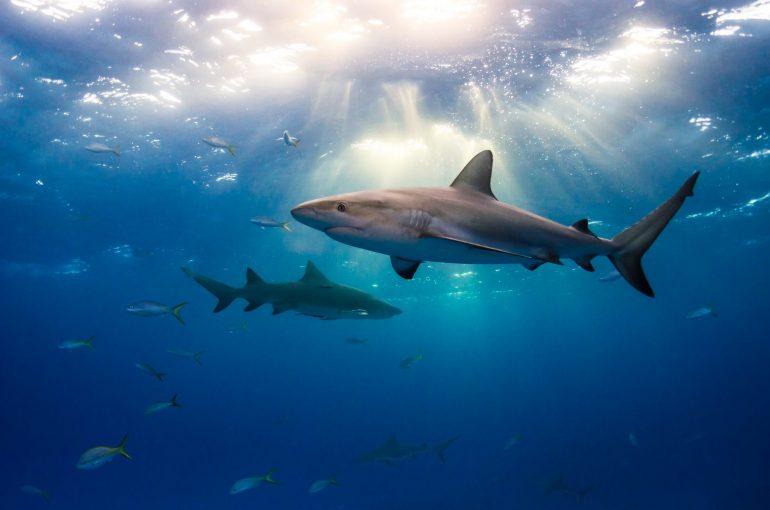 Despite the fact that the Caribbean reef shark is so abundant, surprisingly little is known about them.

What Do Caribbean Reef Sharks Eat?

Like most of the requiem sharks, their diet consists predominantly of bony reef fish, squid and crustaceans such as crab, lobster and shrimp. The bigger adults will also eat elasmobranchs including the yellow stingray and eagle ray. To catch its prey this shark uses an incredibly sophisticated mix of six senses – olfactory, tactile, visual, auditory, gustatory and electrical reception – and it is adapted to detect low frequency vibrations in the water, usually indicative of a nearby struggling fish.

Scientists believe the Caribbean reef shark reach maturity at around 5-6 years old and can live anywhere between 14 and 22 years.

Generally, this shark is relatively passive and poses little threat to the humans it comes into contact with. In fact they are quite shy and tend to avoid human interaction altogether. That said, the Caribbean reef shark’s size makes it an apex predator and according to the International Shark Attack Files, there have been 27 provoked non-fatal attacks, mainly on fishermen mistakenly catching them in nets. Of the four reported unprovoked attacks, it’s been speculated that they mistook the unfortunate human for a food source.

What are the Sleeping Sharks of Isla Mujeres?

The Caribbean reef shark has been given the nickname ‘sleeping shark’ because they are the only known shark species to demonstrate a very peculiar type of behaviour. In very specific areas, most notably off the Yucatan peninsula, they can be found lying motionless in underwater caves or on the seabed for hours at a time. It turned out that they weren’t sleeping as their eyes followed divers and potential prey. Scientists studied this behaviour and what appears to be happening was that freshwater upwellings inside the caves freed parasites clinging to the shark’s body and this causes what is effectively a narcotic-style ‘high’.

Sort of. They certainly don’t dance to music like humans do but they do have what’s known as a threat dance routine if they feel threatened. Most other sharks will either directly attack or beat a hasty retreat but not Carcharhinus perezi. If this shark does feel threatened it will elaborately zigzag around the potential threat and dip its pectoral fin up and down in a recognisably rhythmic manner. If you are lucky enough to be diving in the Caribbean and you encounter a dancing Caribbean reef shark, it’s most certainly not an invitation to waltz…