You’d be surprised what you can do with a second hand car. Ambitious? We think not.

The space shuttle was a quite phenomenal feat of science, engineering and technology. Through 30 years of missions, it has taken hundreds of astronauts into space; it has launched and fixed satellites; built the International Space Station; conducted cutting-edge research across all branches of science and pushed the limits of what we deemed possible, advancing technology to hitherto unknown realms. Put simply it has amplified our understanding of the world we live in and beyond.

But, this is a piece about cars, not spaceships. Everyone loves a cool list of statistics and while we could have given you page after page of space shuttle stats, the one we’re focusing on for this article is the cold, hard cash.  The shuttle program cost NASA and the American taxpayers somewhere north of $200bn (or 1.4m 2015 Porsche 911 Turbos) but we reckon we could do it much, much cheaper…*

*It’s important to note here that we haven’t factored in the cost of 500,000 litres of liquid oxygen, 1.5m litres of liquid hydrogen and the 450,000kg of unbelievably complex propellant we need, so we’re a fair way from sitting on the launch pad… Equally we’re not really talking about actually going into space, more making something that sort of looks like a space shuttle or as close as you can get with five banged up second hand cars. But it’s just a bit of fun, isn’t it.

So, what five cars do we think would make a decent attempt on a space shuttle?

For the nose of our shuttle, we’ve opted for a Robin Reliant. Its probably not a car you’d want to pick up today to head to the shops in, and you’d want to consider carefully your list of tips for buying a used car before buying one. But for this endeavour it has its benefits. Not the most technically-advanced car in the world, granted, but it’s a bit pointy and the additional 0.8-litre power could come in handy if there’s a bit of unexpected turbulence on the way up. It’s also one of the most iconic 80s tv cars ever!

Read any account of trips into space and the overriding memory is the view as they leave our atmosphere and travel upwards and outwards. Views of the Earth and the Moon are said to be utterly spectacular so we’ll need a car with good all-round visibility, and the AMC Pacer – the ‘greenhouse on wheels’ – is perfect. The Wheeler Dealer pilots (probably Mike and Edd if we can get the insurance) could steer and control everything from there.

Once the boys are in orbit and on their way out into the deepest, darkest depths of space, they can switch on Otto the Autopilot (if you get the reference, let us know on Facebook) and relax. But how? They’re going to need somewhere to sit, perform experiments* (*make cocktails), read and watch Wheeler Dealers on the Discovery Channel, so where better to do it than in a Rolls-Royce stretch limo? It’s got a bar, an L-shaped couch, TV and DVD and most likely a glittery disco ball.

To get into space, you need some serious power, but coupled with that power, you need range and if possible, low emissions. For range, we’ve not opted for electric or hybrid cars since in space there are no plug holes so we went for the Peugeot 308 BlueHDI. It’ll never get into the list of the world’s most expensive second hand cars but it’s got a decent little 1.6-litre diesel engine and a range of 79 mpg so we should be fine. Also, with CO2 emissions of 82g/km, we save over £100 on road tax…

Space travel requires some proper horsepower under the bonnet so we can only look in one direction – the fastest production car on the road, the Bugatti Veyron Super Sport.  In fact, we’ve decided to go for two of these iconic cars, one on each side for when you need that little bit of extra thrust. While we’d never recommend stripping back a Bugatti for parts (even the most insane custom car shows wouldn’t do that!), in the spirit of made-up, imaginary science we figured why not?

It's the Shuttle Jim, But not as we Know It

We were trying to better the $1.7bn it cost to build Endeavour, so how did we do? 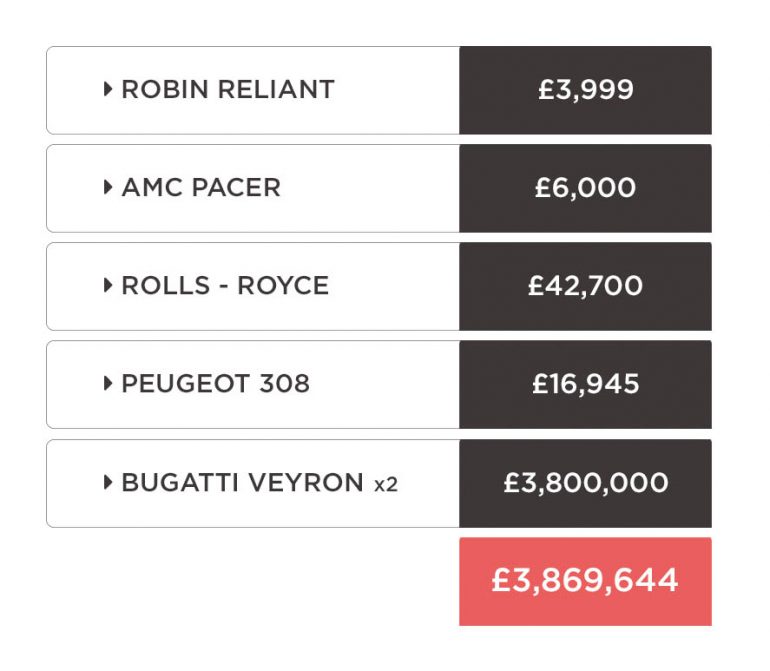