Jaguar has been making some of the world’s finest cars for over eighty years. The Coventry-based car maker is famous the world over for its iconic automobiles. Famous models included the E-Type, that made even Enzo Ferrari swoon, the regal Mark 2 and the XJ220, the world's fastest production car when it was launched in 1992. Read on to find out about the best 1940s Jaguar cars including one of the most revolutionary sports cars ever made.

The Swallow Sidecar Company was formed in 1922 and, after a management buyout in 1934, it was renamed SS Cars Limited. The pre-war Jaguar cars bore the name SS Jaguar, but in 1945 – for very obvious reasons – the SS name was dropped and the company renamed Jaguar Cars Limited. This rebirth led to the launch of some of the most coveted cars the world had ever seen. The 40s Jaguars were astonishing. Here they are in all their glory.

The Roar of the Jaguar - 1940 Models That Shook The World 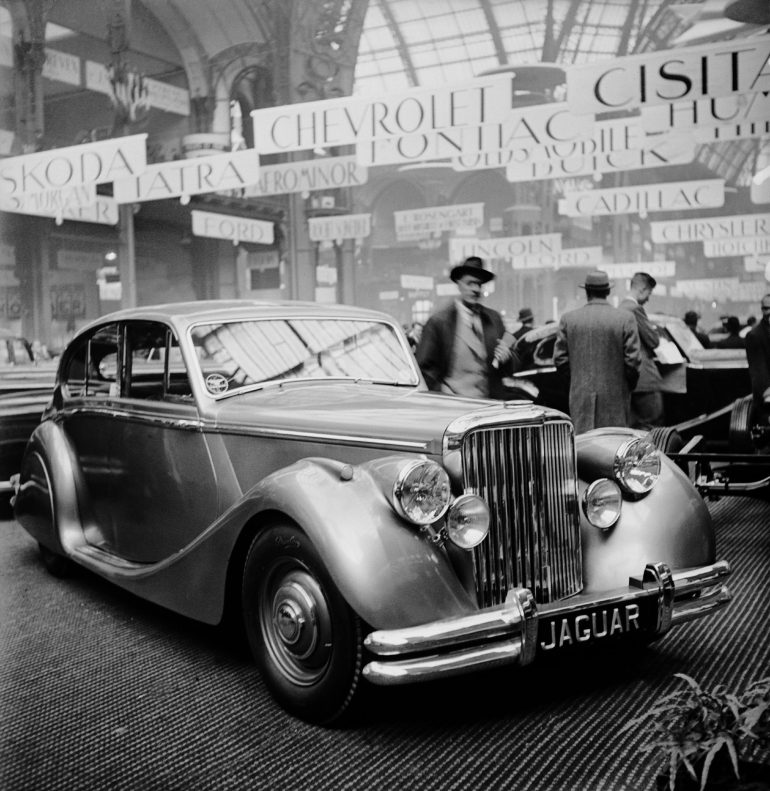 A Jaguar at The Car Show In 1948 (Photo: Keystone-France via Getty Images)

In October and November 1948, the British International Motor Show at Earls Court was a huge ‘welcome home’ bash for the automotive industry after the tough war years. Of all the cars designed in the second half of the 1940s, Jaguar cars stole the show.

The Mark V was one of the great luxury cars of the 1940s. Jaguars were renowned for their beauty, speed and refinement and the Mark V was at the top of the tree. It was a car fit for royalty, smothered in leather, the finest wood and deep wool carpets. It was also a car of ‘firsts’. The first Jaguar with…

…and it was also the first of the 40s Jaguars designed to be made in both right-hand and left-hand drive configurations, as they eyed the all-important and incredibly lucrative US export market.

The Mark V was offered with two engine choices, the overhead-valve straight-six 2.6-litre, generating 102hp, and the more powerful and uncoincidentally more popular 3.5-litre, pushing out 125hp and topping out at 90mph.

One motoring journalist of the day described it as ‘unmistakably Jaguar and more than ever before, the finest car of its class in the world.’

Not just one of the greatest Jaguar 1940 models, but one of the best cars of all time. It almost never saw the light of day. The only reason the XK120 was built was to showcase Jaguar’s sensational new 160hp, 3.4-litre straight-six engine, which went on to power the E-Type and stayed in production in its various guises until 1992.

Whether it’s true or not has been lost to history, but it was said that the engine was conceived by Jaguar’s top technical brass – William Lyons, Walter Hassan, William Heynes and Claude Bailey – while they sat on night-time ‘firewatch’ duty on the roof of their factory in Coventry during the Second World War.

The XK120 was one of those rare game changers that made the automotive world sit up and realise that whatever they were doing, nothing came close. In an age where the average family car barely got above 60mph, the king of the 1940s Jaguars – the fastest production car in the world when it launched – could hit a previously unheard of 120mph. It went from 0-60 in ten seconds.

The original idea was to produce just 200, as a limited edition model to show off the engine. However, the demand was so high that in the six-year run to 1954, they made over 12,000. The first production car, chassis #670003 was bought by Hollywood legend Clark Gable.

It’s difficult to describe the sublime, uncompromising, eye-watering beauty of the XK120 without veering into hyperbole territory. Suffice it to say that not only is it the greatest of the 1940s Jaguar cars, it is regarded by many as the greatest Jaguar of all time and even one of the greatest cars of all time.

Virtually all the world’s top car makers suffered as a result of the war but for Jaguar, their 1940 models proved to be some of the most successful in the company’s history. The decade’s success lay the foundations for the outstanding 1950s Jaguars that followed, which truly pushed automotive boundaries to the limit.