For almost ninety years, Jaguar has built some of the world’s most iconic cars. From the spectacular XKs of the forties and fifties, the sixties E-Type - once called the ‘most beautiful car ever made’ by Enzo Ferrari - through to the sleek and sensual XJ-S in the seventies and eighties. Read on to find out more about the history of one of the classic British car brands and the best 30s Jaguar models.

The company we know today as Jaguar Land Rover started out in 1922 as the Swallow Sidecar Company. It was founded by two motorcycle fanatics called William Lyons and William Walmsley to make sidecars. In 1934, Walmsley sold his share of the business to Lyons, who changed the name to SS Cars Limited. The first Jaguar car, made in 1935, was a roaring success. Here are the best 30s Jaguars. 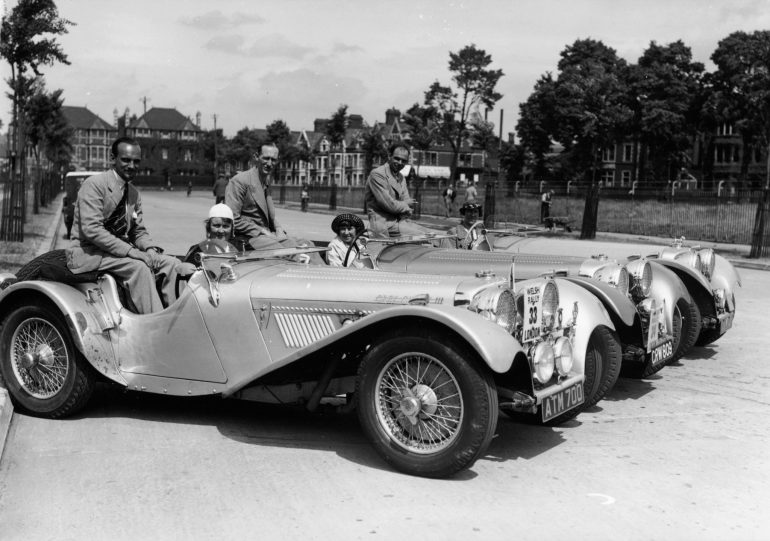 Technically speaking, the first two cars produced by the company which became Jaguar was a sports saloon known as the SS 1, and a four-seater sports car known as the SS 90. The first car to bear the legendary Jaguar name was the 1935 SS Jaguar 1½ Litre.

The following year they took another leap forward with the launch of the rather marvellous SS Jaguar 100.

The SS Jaguar 100 was the company’s first true sports car. The first version had a 2.6-litre engine but in 1938, the 3.5-litre version was launched and was a sensation. Of all the 1930s Jaguar cars, this was the best. At the time, it became the quintessential British sports car.

A top speed of 101mph and a 0-60 time of 7.1 seconds was seriously impressive. With its gorgeous wave-like wings and long bonnet, it was a car that epitomised the speed, style and glamour of the 30s. It was marketed for its ‘accurate steering and safety at speed’. At £445, it was described by a famous car magazine as the ‘undisputed performance-per-pound champion of the 1930s’. 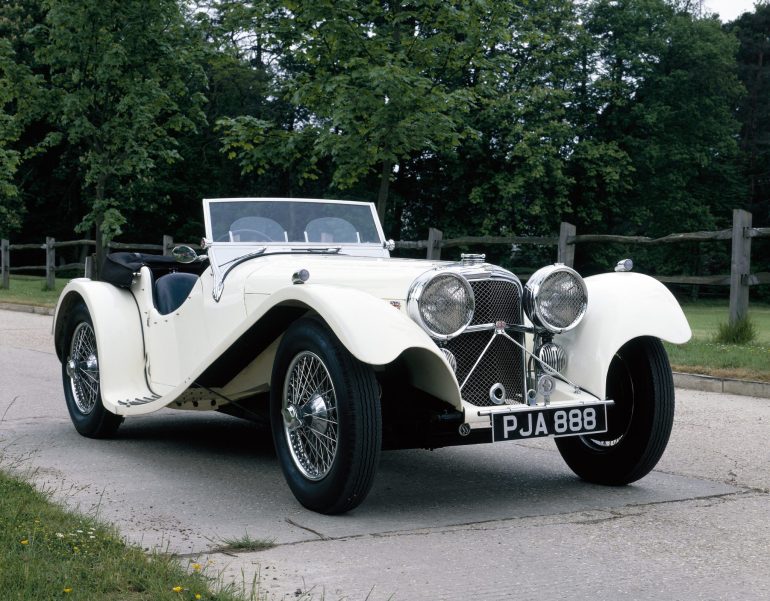 In the 1930s, Jaguar cars were some of the most desirable and luxurious saloon cars in the world – as they are today. There were three variants in the pre-war decade, in ascending order of size: the SS Jaguar 1½ Litre and the SS Jaguar 2½ Litre launched in 1935, and the SS Jaguar 3½ Litre two years later.

The smallest of these classic 30s Jaguars started with a four-cylinder 1.6-litre engine (uprated to 1.8-litre from 1938) and what it lacked in outright performance – 70mph was just about possible – it more than made up for in elegant style.

The mid-range 2½ Litre (with a 2.7-litre engine) was slightly longer to accommodate the bigger six-cylinder engine and the flowing lines and small, curved rear window became Jaguar hallmarks for decades to come.

When William Lyons displayed the 2½ Litre to the public, he asked his audience to guess its price. Most guessed it should be at least £625 and some even went up to £1,000. In fact one of the best 30s Jaguar models was just £385. An eyebrow-raiser for sure and another hallmark of Jaguar to this day. Exceptional value for exceptional cars.

The 1937 model was even more luxurious than its predecessor. It included the addition of vented front wings, mechanical windscreen wipers, armrests and pockets in the rear doors, a light on the underside of the boot lid (so the driver could access the toolkit at night) and small storage spaces at each end of the beautiful French walnut dashboard.

The 3½ Litre was the final iteration, and a touch more expensive at £445. Aside from the side-mounted spare wheel being relocated to the boot and an inch added to the wheelbase for more interior space, there were very few differences from the mid-range car.

As with much of British industry, in 1939, Jaguar stopped the production of cars to contribute to the war effort, bringing an end to a decade of automotive innovation.

Setting the Foundations for Success

There’s no doubt about it, 1930s Jaguars were superb. They paved the way for the next generation of cars, and many of the 1940s Jaguars that followed went down in history as some of the most iconic automobiles ever made.