What is a Group of Tigers Called?

The English language is a very strange beast. We have words that look alike but sound completely different, like ‘cough’ and ‘although’. We have silent letters that seem to have no place in words like ‘thumb’ and ‘island’ and we have odd phrases like ‘it’s raining cats and dogs’ and - if you want someone to tell you a secret - you ask them to ‘spill the beans’. But the oddest of all oddities is collective nouns. Those words that describe a group of people or things or - in this case - animals. So, let’s get to the question at hand - what is a group of tigers called?

Collective nouns, nouns of assembly or terms of venery (a medieval French word for hunting – venerie) have been around for hundreds of years. There doesn’t appear to be any rhyme or reason for them and some language experts think that they were made up for fun.

Some of them are very descriptive, like an ostentation of peacocks, a prickle of porcupines or a flamboyance of flamingos, and some of them are just downright bizarre. A tower of giraffes, an army of ants, a hive of bees, a pounce of cats and a tuxedo of penguins all describe a trait or an observation of the animal they refer to. There are also terms that everyone knows, a pride of lions, a school of fish and a pack of dogs.

So – when it comes to one of the world’s most iconic predatory species, just what is a group of tigers called?

What is a Group of Tigers Called? 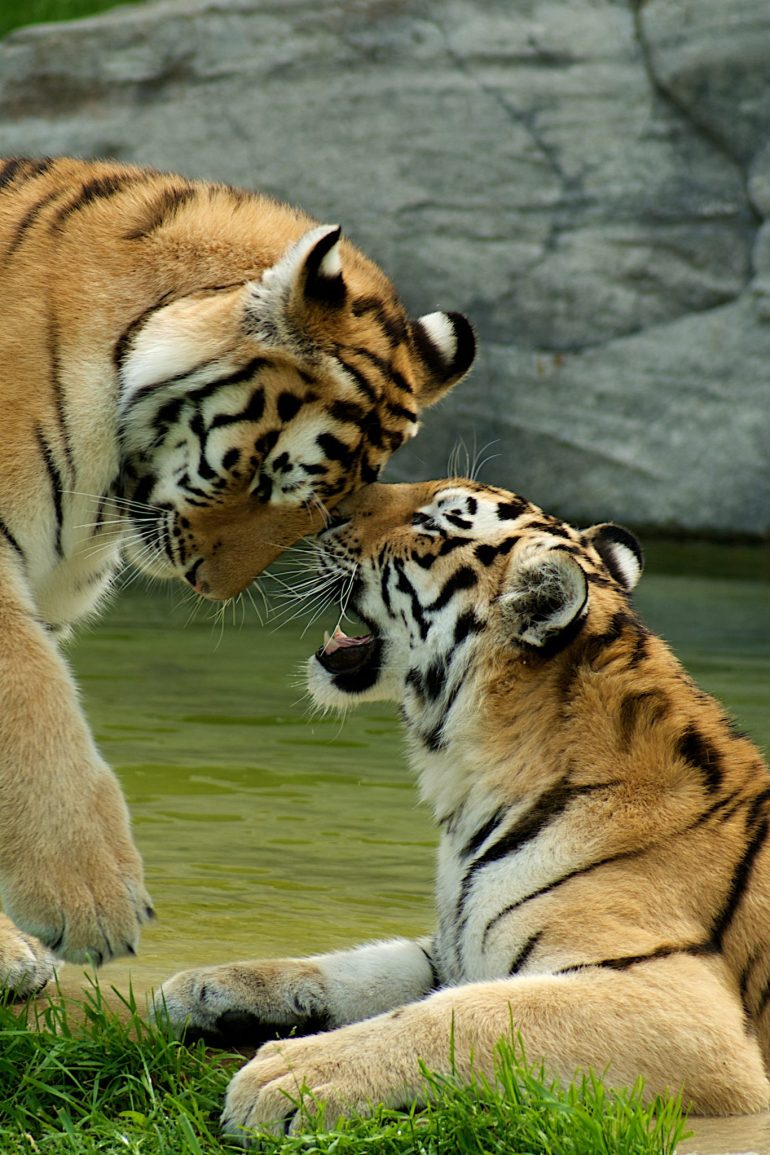 There are actually two terms of venery for tigers, depending on the makeup of the group. The first is a streak of tigers and this refers to a female tiger and her cubs. The second is an ambush of tigers, this refers to groupings of adults who will, very occasionally, come together to either allocate or hunt for resources.

For the most part, tigers are solitary animals, spending much of the day asleep and much of the night on the hunt for food but on occasion they do come together, forming a streak or ambush of tigers.

Why do we call a group of Tigers a Streak or Ambush? 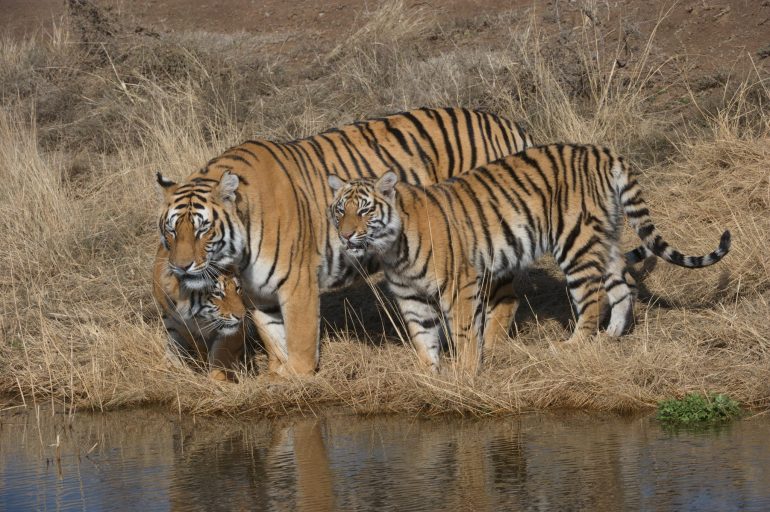 A family of tigers (Photo: julianwphoto via Getty Images)

There appears to be no right or wrong answer to this one, nor does anyone seem to know who first coined the phrase – another oddity of the English language.

A Streak of Tigers 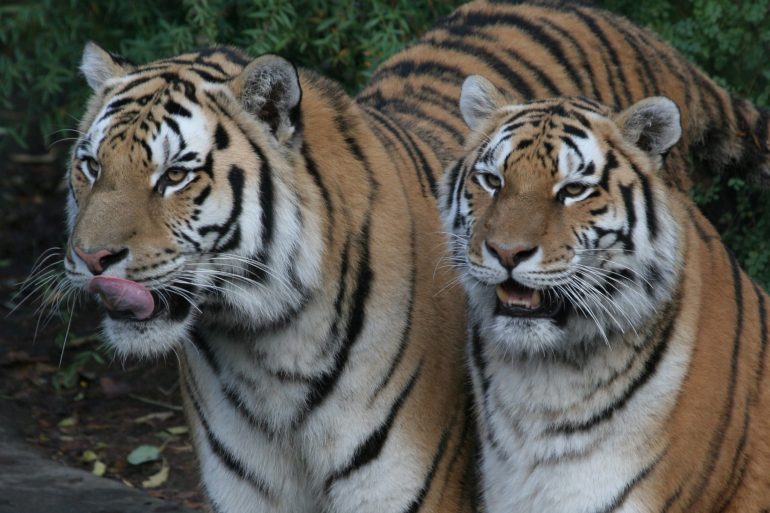 Two tigers on the prowl (Photo: imagesbylinda via iStock)

A streak can be described as either moving swiftly (to avoid attacks on a tiger’s young) or a line or mark that is a different colour from the ground or background (alluding to their distinctive markings used to camouflage themselves). It’s possible this is the origin of the collective noun ‘a streak of tigers.’

An Ambush of Tigers 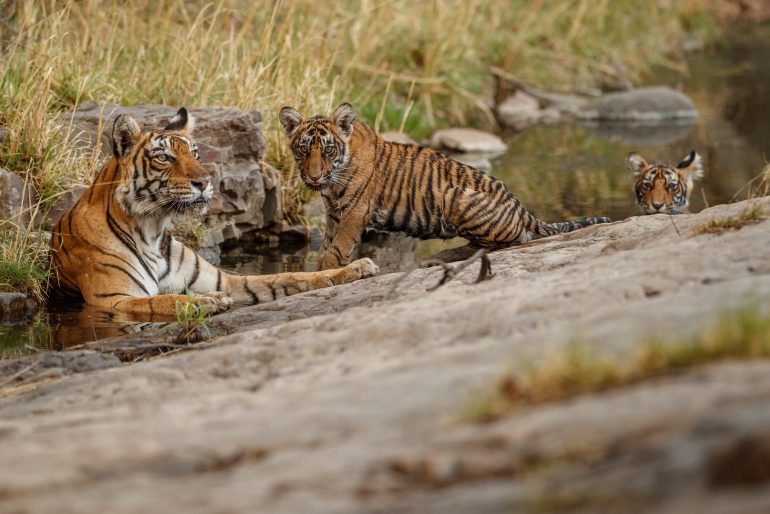 Tigers resting by the water (Photo: Photocech via iStock)

As a solitary apex predator, tigers are incredibly adept at hunting. They rely on sight and sound and they will stealthily stalk their prey, concealing themselves in bushes or tall grass close to the side or rear of their unwitting victim. Then, they will very slowly and silently move forwards, eyeing their kill while it remains blissfully unaware of the fate about to befall it.

When they are six or eight metres away, the crouching tiger will dramatically lunge out from their hiding place in an incredible show of raw power and gymnastic agility. After a successful hunt, what they don’t eat they will often hide, coming back later the same day or the next to finish.

This form of attack is known as ‘stalk and ambush’ hunting so logic suggests that this is probably where the name derives from. 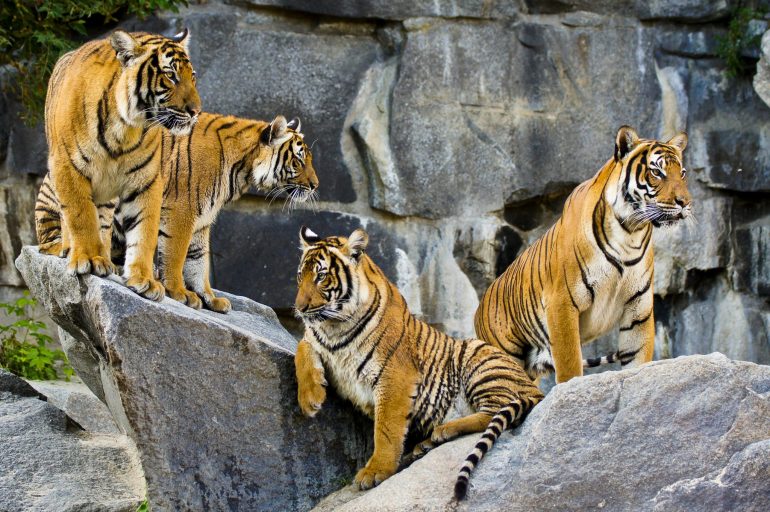 Tigers are the world’s largest cats but despite being an apex predator at the very top of the food chain, they are still incredibly vulnerable.

They face unprecedented challenges in the form of poaching and illegal hunting, deforestation, habitat loss and regional isolation but yet they find ways to survive in some of the world’s most inhospitable locations.

What’s in a Name?

Now you know the answer to the question ‘what is a group of tigers called’, surely you’d like to know where the word ‘tiger’ comes from?

Well actually, no-one knows for sure! The most likely etymology of the name is from the Persian word tigra which means ‘pointed’ perhaps referencing their teeth, and tighri, a word from the ancient Avestan language – an early Iranian language from the first millennium BC – which means ‘arrow’, possibly a reference to the tiger’s speed.