What do Tigers Eat?

Solitary apex predators with a reputation that precedes them, tigers are rivalled only by lions and sharks for their power, strength and ferocity. They are one of the world’s most beguiling animals and the subject of endless fascination. Here, we’ll answer one of the most common questions about tigers - what do tigers eat?

Tigers rank among the world’s most fascinating, complex and mesmerising creatures. They are iconic national symbols, renowned for their raw power and strength while remaining a vital component of our global ecosystem.

They are one of the most closely studied animals in the world and we know a huge amount about their lives, habitats, behaviours and characteristics. So if you want to know what tigers eat, you’re in the right place.

What Do Tigers Eat? 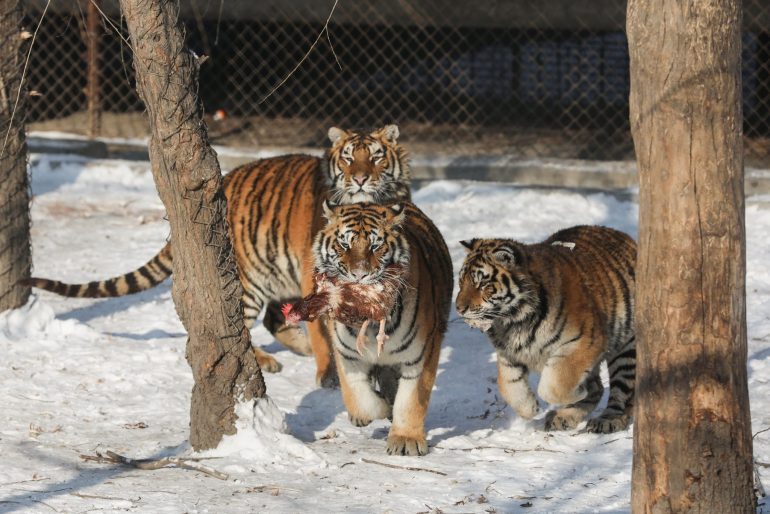 Tigers are what’s known as obligate carnivores – often called hypercarnivores – meat eaters whose diet is almost entirely dependent on the nutrients found in the flesh of animals.

Obligate means ‘by necessity’, that is, meat is biologically necessary for tigers to survive. You’ll never find a vegetarian tiger no matter how hard you look!

In order to eat, tigers must hunt to survive. Hunting is a skill taught to them by their mothers when they are just a few months old. This is an instinctive necessity that equips them with the skills they need for a life in the wild.

As they are solitary animals, Tigers can’t rely on a pack to support them in their endeavours. In addition, it’s estimated that only one in ten hunts is a success – often less, dependent on the territory – so they need to find prey large enough to sustain them for at least a week and often for up to ten days.

To understand what tigers eat, it’s important to understand the hunt. They usually hunt at night when the weather is cooler and they can use the darkness as camouflage.

Relying almost exclusively on their senses of sight and hearing rather than smell, they will conceal themselves in bushes and tall grass, often waiting very patiently in absolute silence, facing the side or rear of their unsuspecting prey. They then creep forwards quietly, stalking their prey. When close enough, they will leap forward with extreme speed and strength and take down the kill with an immensely powerful bite to the neck or throat. This is known as ‘stalk and ambush’ hunting.

Once the struggle is over, they will usually drag their prey to an excluded spot to eat in peace. What they don’t finish in one sitting – and tigers can eat up to 40 or 50kg in one go – they often cover, returning later or the following day. 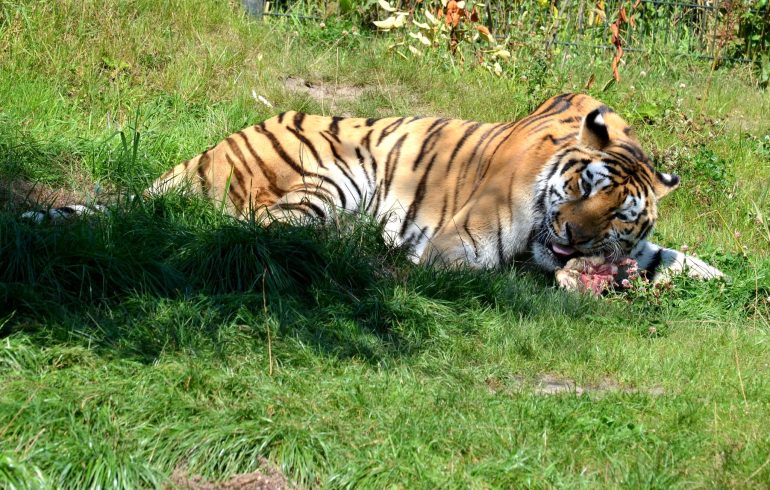 A Siberian tiger chewing on its lunch (Photo: Gerrit Bos via iStock)

What tigers eat depends on where they are in the world. Broadly speaking, they all favour medium to large ungulate mammals – animals with hooves such as deer, pigs, rhinos and even elephants – weighing between 60 and 250kg. Of course the availability of prey differs depending on location, so for example the Siberian tiger will hunt different prey when compared to other tigers such as the Sumatran tiger.

Moving south, the South China tiger – even though it is believed they are functionally extinct in the wild – eats wild boar, hog deer, muntjac deer and if they can catch them, the gray langur monkey. They will also eat smaller animals such as porcupine, hare and peacock.

In Malaysia, the diet of the Malayan tiger consists of wild boar, sambar and barking deer (known as muntjac deer), bearded pigs, serow (large mammals that resemble a cross between a goat and an antelope) and small sun bears. They will also go after small, weak or injured elephant calves.

On the island of Sumatra, the last known habitat of the Sunda tiger, asking ‘what do tigers eat’ offers a long list! Their main sources of food are mouse deer, muntjac deer, wild pigs, fish, pheasants, macaque monkeys, tapirs (a small, pig-like mammal) and porcupines. If they can catch them, they will also eat crocodiles but they run a very real risk of crocs fighting back and will often sustain debilitating or even life-threatening injuries after alterations.

What Tigers Eat in Captivity

Of course tigers in professionally-operated captivity don’t have to go through the same rigours of the hunt and the kill as they do in the wild. They are fed every day and the meat will usually contain the necessary vitamins, minerals and if necessary, medication, the tigers need for a balanced diet and a healthy life.

On average, tigers in captivity will eat around 10 – 15kg of meat per day. Their diet will consist of chicken, beef, goat, horse, camel, donkey, water buffalo, rabbit and kangaroo, ideally with the bones and hide still attached, as they would eat in the wild.