The largest of all the big cats, the Siberian tiger is a symbol of power, strength and majesty. Also known as Amur tigers, Panthera tigris tigris is one of the world’s most beautiful animals. Read on to find out about their life, diet and habitat as well as the most amazing Siberian tiger facts.

The Siberian tiger is one of the world’s most intriguing and charismatic animals.

Once on the precipice of extinction, today they roam the wild forests of the Russian Far East in greater numbers than they have done for almost eighty years.

Here is everything you need to know about these colossal cats including the best facts about Siberian tigers.

How Big are Siberian Tigers and How Long do they Live? 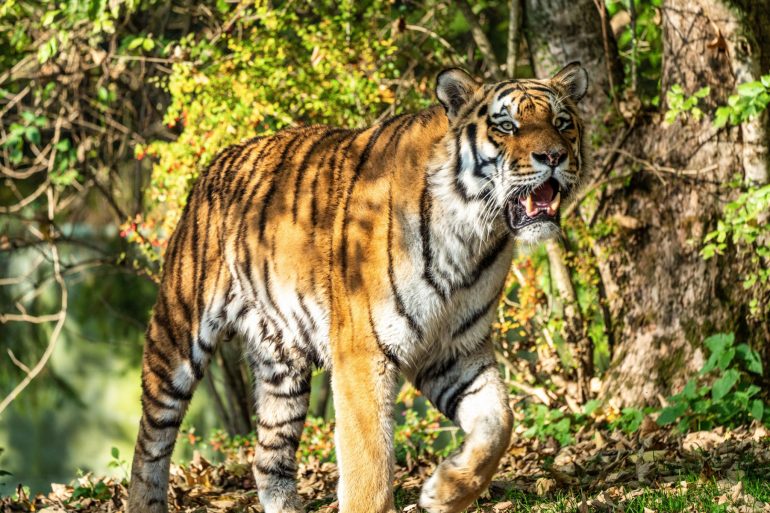 There are tales of exceptionally large specimens including a wild male shot in Manchuria in 1943 measuring 3.5 metres and weighing, depending on whose story you believe, 300kg, 318kg, 384kg or even 408kg but there’s no evidence to back up these dubious – even apocryphal – claims. These are certainly not documented Siberian tiger facts!

In the wild, Siberian tigers tend to live between ten and fifteen years but in captivity, with proper care and attention, a controlled diet and no risk of – admittedly very few – predators, they can live to twenty years or more.

Where do Siberian Tigers Live? 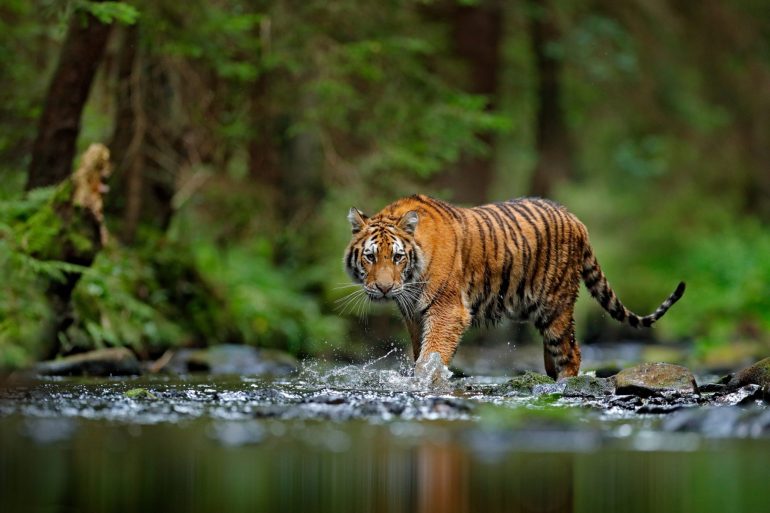 A Siberian Tiger in its forest habitat (Photo: Ondrej Prosicky via iStock)

Once inhabiting much of the Korean peninsula, northeastern China, eastern Siberia and as far west as Lake Baikal. However, one of the saddest facts about Siberian tigers is that their habitat is much smaller than it once was, as there are now far fewer of these incredible beasts left in the wild.

Today, Siberian tigers mostly inhabit the coniferous, scrub oak and birch forests of the Russian Far East, a narrow strip from Khabarovsk Krai south into Primorsky Krai, around the Sikhote-Alin mountain range. There are also very small populations of Siberian tigers in China and possibly North Korea. They prefer dense woodlands and their distribution is largely based on the presence of food sources.

In terms of numbers, it’s hard to know for sure, but the most recent estimates suggest there are approximately 550 wild Siberian tigers in Russia with very small numbers – no more than about 20 or 30 – in both China and North Korea.

What do Siberian Tigers Eat? 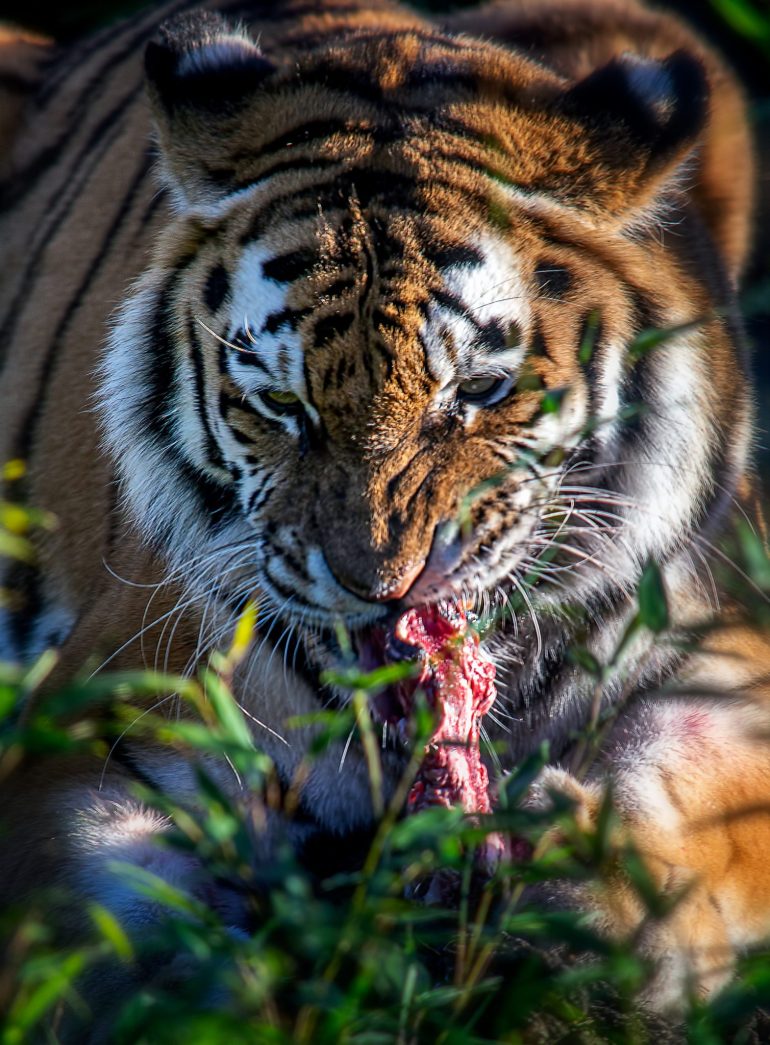 Making a meal of it! (Photo: stanzi11 via iStock)

One sure-fire fact about Siberian tigers is that they are hungry souls! As with most tigers, only around one in ten hunting adventures ends in success. Therefore, when they do find dinner, they will often gorge.

To survive in the harsh conditions of the Russian winter these solitary predators – with their thick, wide paws – need to eat around 10kg of food a day. Their diet usually consists of elk, deer, wild boar, bear and lynx. They’ll also eat rabbit, hare, pika (a small rodent rather like an oversized mouse) and salmon.

If they are particularly hungry they can eat up to 50kg of meat in one meal, that’s the equivalent of 300 cheeseburgers! 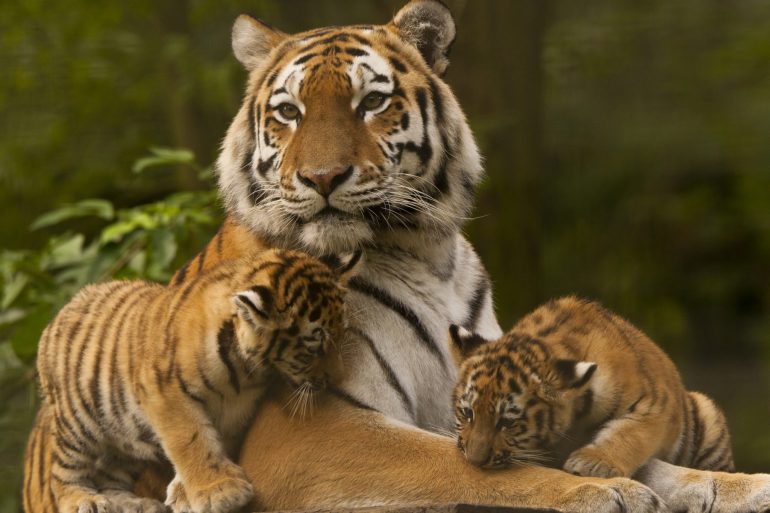 It’s All In The Name

One of the most interesting facts about Siberian tigers is that over the years, they have been called a variety of different names – Amur tigers, Manchurian tigers, Korean tigers and Ussurian tigers – depending on the geographical region in which they have been found.

Now You See Me…

As with all tigers, the stripe pattern of Siberian tigers is unique – just like a human’s fingerprints – and if you shave a Siberian tiger (which we strongly advise against) their stripes are visible on their skin. However one of the more fascinating Siberian tiger facts is that in winter their fur is much paler, as well as longer, denser and softer than it is in the summer months.

Remarkably, the Siberian tiger was on the verge of extinction in the wild in the 1930s and 1940s. It was estimated there may have been as few as 30 tigers remaining. However, thanks to Russian conservation efforts – including the opening of the Sikhote-Alin Nature Reserve in 1935 and the banning of tiger hunting in 1947 – the wild Siberian tiger population has steadily grown.