Siberian Tiger vs Bengal Tiger: What are the Differences?

The biggest of all the world’s big cats, tigers are the epitome of raw power, supreme strength and absolute confidence. They are cunning, ferocious and intelligent and these apex predators sit at the very top of the food chain. We know there are many different types of tigers and from a distance they can appear quite similar, but what are the differences between the two biggest tigers on Earth? It’s the match-up you’ve all been waiting for - Siberian tiger vs. Bengal tiger!

Tigers are perhaps the most iconic, fascinating and complex of all the world’s charismatic megafauna. Among a number of sub-species of tiger are two of the most famous, Siberian tigers and Bengal tigers. So what are the similarities and differences between them? 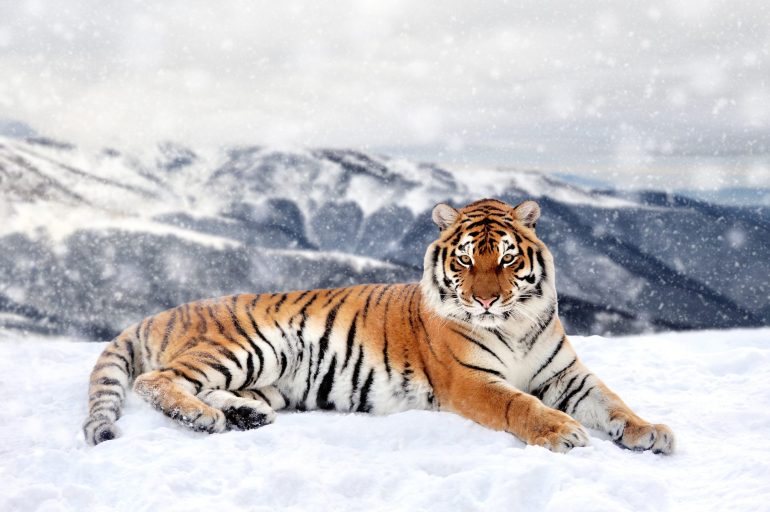 A stunning wild Siberian tiger in the snow (Photo: Byrdyak via iStock)

First off, let’s understand a little about these two amazing tigers. They are the largest members of the cat family, the dominant apex predators in their habitats, and they are both solitary creatures. They are native to the continent of Asia, they are highly territorial, and from a distance they look alike. However, while they share these factors in common, there are many differences between the Siberian tiger and the Bengal tiger. 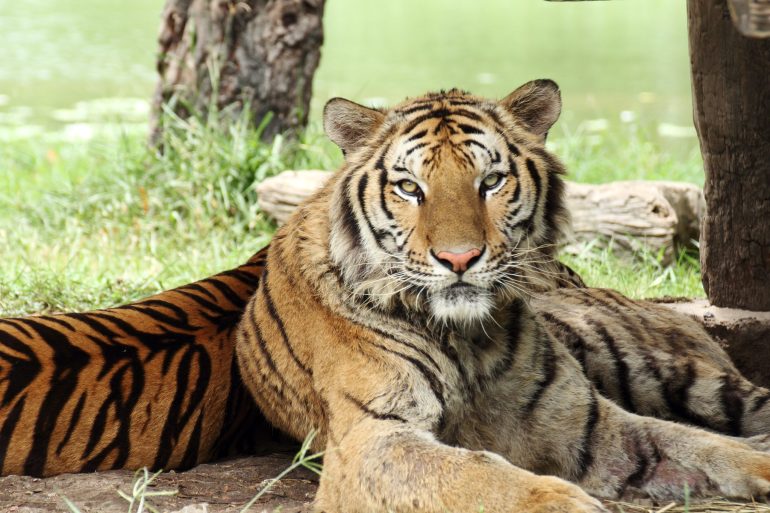 A Bengal Tiger lazing in the shade (Photo: Kung_Mangkorn via iStock)

When we compare the Siberian tiger vs Bengal tiger, one of the biggest differences is their location and habitat.

Bengal tigers, also known as Royal Bengal tigers and Indian tigers, are found predominantly in India but also in parts of Bangladesh, Nepal and Bhutan. They prefer temperate, tropical and subtropical climates and live in hot and humid rainforests, grasslands, wetlands and mangroves.

Siberian tigers, also known as Amur tigers, have adapted to survive in the harsh, often freezing coniferous, scrub oak and birch forests of the Russian Far East. There are also very small populations in China and possibly in North Korea. 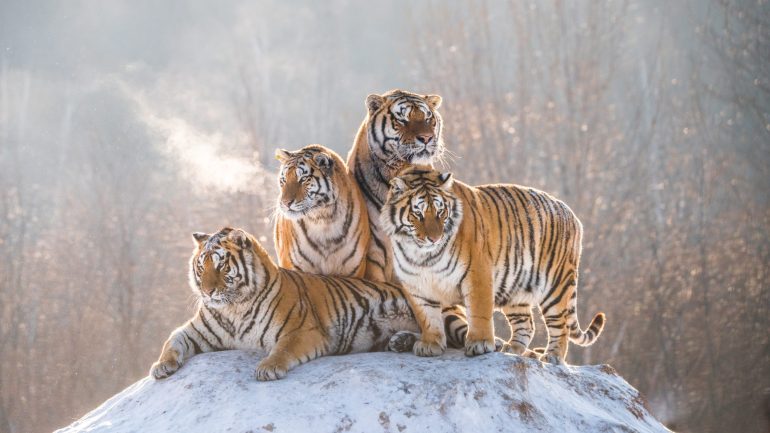 A pride of Siberian Tigers (Photo: Yotin Pilaisomboon via iStock)

From afar, these two tigers may look similar but up close there are some very obvious differences.

On average, Siberian tigers are the biggest of all the tiger subspecies. The biggest males can reach 3.2 metres long and weigh close to 300kg and the biggest females measure up to 2.7 metres, weighing up to 180kg.

Bengal tigers measure up to around 3.1 metres long and can tip the scales at 275kg. Females are a bit smaller, usually measuring around 2.4 metres long and weighing up to 175kg.

What’s the Difference Between Bengal Tigers and Siberian Tigers? 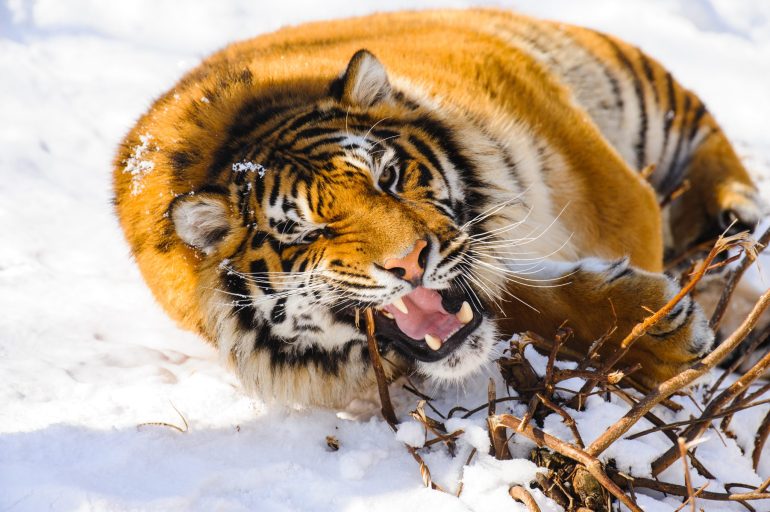 A Siberian Tiger with its beautiful coat (Photo: YuriyGreen via iStock)

Because of the obvious temperature differences in where they live, Siberian tigers and Bengal tigers have quite different colouring.

Siberian tigers have a pale, thick and long coat in the freezing winter months (which brightens up in the summer) and its stripes range from golden to a shade of rusty-red. In the hotter Indian subcontinent, Bengal tigers have yellow to light orange stripes, and their fur is shorter. 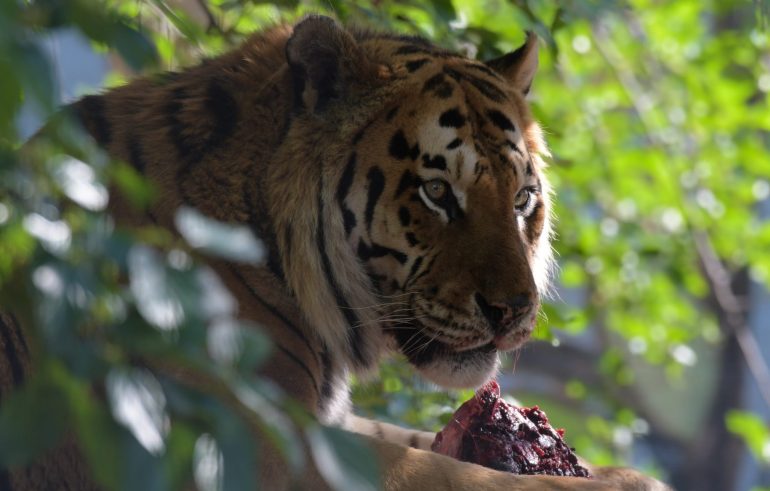 All tigers are carnivores, sometimes known as obligate carnivores or hypercarnivores. This means they are meat-eaters whose diet is almost entirely dependent on the nutrients in animal flesh – you can look as hard as you like but you’ll never find a vegetarian tiger!

It’s also true that for all tigers, only around one in ten hunts are successful – so when they do catch dinner, they often gorge as much as they can because they don’t know when they will next eat. At their hungriest, they can both down around 50kg of meat in one sitting – that’s the equivalent of about one thousand Mars Bars!

The diets of Siberian tigers and Bengal tigers are broadly similar – lots and lots of meat – but of course differ in terms of available food sources. In the Russian Far East the Siberian tiger preys on elk, deer, wild boar, bear and lynx. They’ll also eat rabbit, hare, pika (a rodent that looks like a big mouse) and salmon. Further south, the Bengal tiger feasts on deer, bison, water buffalo, wild pig and antelope and on occasion they will also eat leopard, fox and even crocodile. 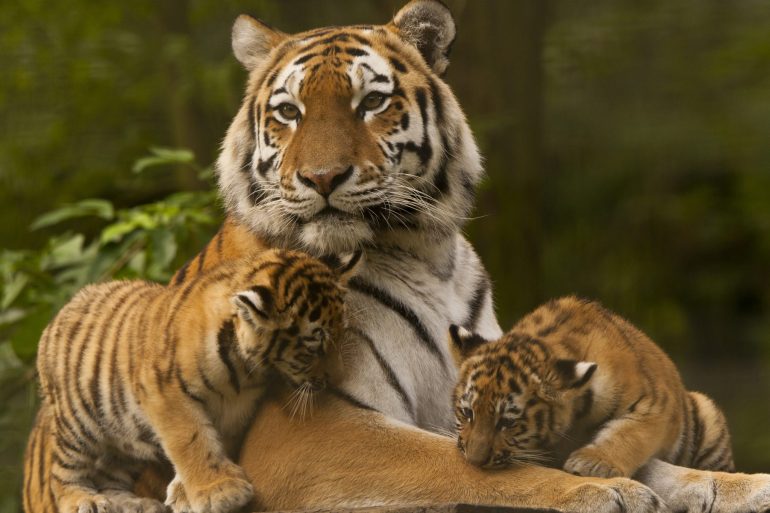 Over the last century, the number of wild tigers around the world has been depleted by over 96%, from an estimated 100,000 at the start of the twentieth century to less than 4,000 today. In fact in 1900 there were nine subspecies of tiger but sadly over the past seventy years, the Caspian, Bali and Javan tigers have gone extinct.

The world’s tigers face a very uncertain future and the International Union for the Conservation of Nature Red List, the global authority detailing the conservation status of the world’s animal species, lists both the Bengal and Siberian tigers as ‘endangered’.

It is believed there are fewer than 600 Siberian tigers and around 2,000 Bengal tigers remaining in the wild.

They are Different but Also the Same… 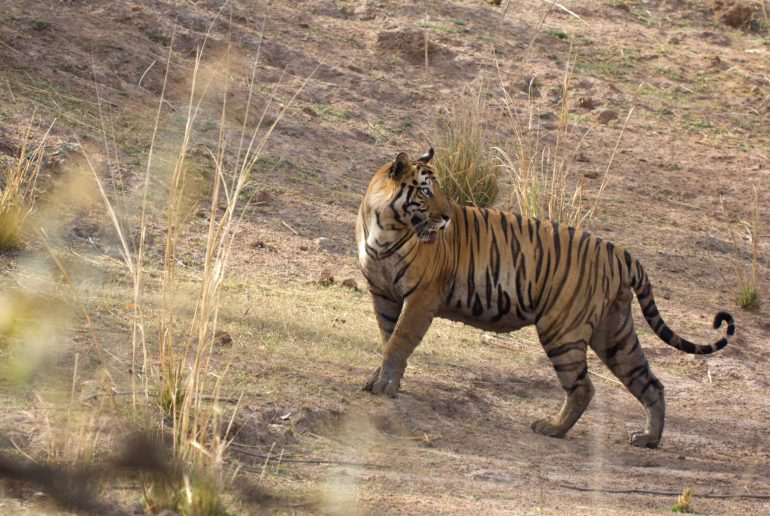 Have you ever heard the phrase ‘there is more that unites us than divides us’? Well that is especially true when talking about the Siberian tiger vs Bengal tiger. Above all, it’s not a competition.

They may live in different places, prefer different habitats and eat different things but they are – along with all the other subspecies of tiger – literal and metaphorical giants of the animal kingdom. They are a very important part of the global ecosystem and almost every culture on Earth attaches a significance to them. Beyond these similarities, it’s also fair to say that both Siberian tigers and Bengal tigers face increasingly difficult circumstances and it remains a significant challenge to ensure that their numbers can not simply remain stable, but thrive and grow in the future.