What Happened to George Mallory and his Lost Expedition?

In 1924, mountaineers George Mallory and Andrew Irvine attempted to reach the peak of Mount Everest. They would not survive, but are forever remembered for their intrepid spirit. One key question has been left in their wake. Did the Mallory Mount Everest Expedition ever reach Earth’s highest point and were they in fact the first people to climb Everest?

In May 1953, Sir Edmund Hillary and Tenzing Norgay reached the summit of Mount Everest. They made history as the first confirmed climbers to have summited the world’s highest peak above sea level.

But before Hillary and Norgay came Irvine and Mallory. The Mallory Expedition culminated in the tragic deaths of its two mountaineers. But they left behind one vital mystery.

Did George Mallory and Andrew Irving reach the top of Everest?

George Herbert Leigh Mallory was born in Cheshire on 18 June 1886 to an upper-middle class family. A graduate of Magdalene College, Cambridge, Mallory taught at the prestigious Charterhouse School in Surrey. This was where he met his wife, Ruth.

Mallory was no stranger to dangerous pursuits. He got his first taste of climbing while on a school trip, after which he became an avid mountaineer and member of the Alps Club, practicing his skills whenever he could.

During World War I, Mallory served as a lieutenant in the British Army. Stationed in France, he would fight in one of history’s bloodiest battles, The Somme.

When asked by a journalist why he wanted to climb Everest, Mallory answered simply, ‘Because it’s there’. This drive and perseverance brought him to the Himalayas for all three of Britain’s first Everest expeditions . The first was a mapping exercise in 1921 for which he quit his schoolmaster job. The second, in 1922, resulted in the tragic deaths of seven of his group by an avalanche. Plagued with guilt and doubt, Mallory almost didn’t return in 1924. But Everest was still there. And Mallory wanted to finish what he’d started.

Did Mallory reach the top of Everest? 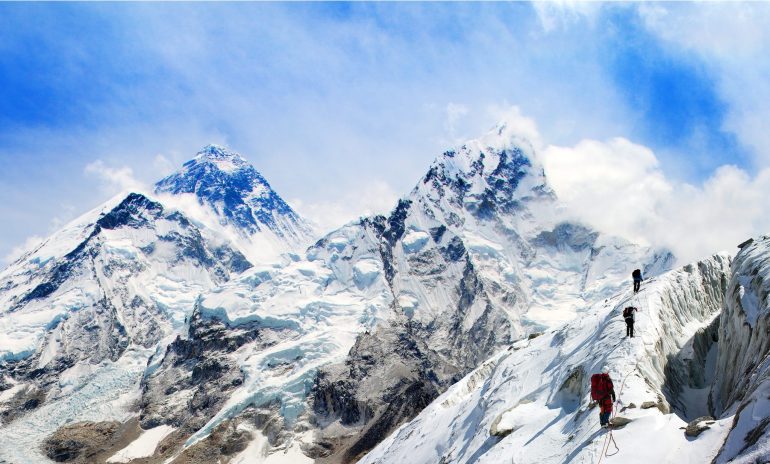 On 6 June 1924, George Mallory and his climbing partner, Andrew Irvine, began their final, fateful summit attempt. The two members of the Mallory Expedition were sighted on the afternoon of 8 June, just as specks in the distance. They would never again be seen alive.

The Discovery of Mallory’s Body

It wasn’t until 1999 that some light was eventually shed on the fate of the two climbers. That’s when Mallory’s body was discovered at 26,760 feet. His remains were well-preserved, and a rope tied around his waist strongly suggested that the men had perished in a fall. Mallory was buried where he was discovered. Irving remains missing.

Despite this revelation, it has only answered half the story. The mystery that remains – and may never be known – is this: What happened before the fall? Did Irving and Mallory reach the top of Everest? It was hoped Mallory’s camera might have provided vital clues, but to date that has never been recovered.

Almost a century after its tragic conclusion, the Mallory Expedition has left its mark on world history. Even the equally enthralling President Kennedy once quoted George Mallory – when talking of the exploration of space, he stated that it was worth pursuing because, like Everest, it was there. That’s the legacy of this great mountaineer. He is an emblem of what is possible, the Mallory Expedition a symbol of unwavering perseverance and his story an inspiration for every adventurer hoping to conquer their own Everest, whatever that may be.