The Blarney Stone has been kissed by everyone from Sir Mick Jagger to Ronald Reagan. The question is, why? We’re leaving no stone unturned as we delve into the Blarney Castle mystery.

Set into the tower of Blarney Castle on the southern tip of Ireland’s County Cork is the famous Stone of Eloquence. Better known as Cloch na Blarnan or the Blarney Stone, it’s believed anyone who kisses it will be endowed with the gift of the gab or ‘blarney’. And millions of people from around the globe have done just that.

As to whether it works, there’s certainly no shortage of eloquent people who have kissed the stone. From literary giants to world leaders, Hollywood stars to opera singers, the list of names is undoubtedly impressive. It even includes a stone of the Rolling variety, Sir Mick Jagger. And every year up to 400,000 people come to this quiet corner of Cork for the Blarney Stone legend.

So, is it true? And, if so, why? Read on as we uncover the history behind the Blarney Castle mystery, starting with the castle itself.

The Name Behind the Blarney Castle Mystery 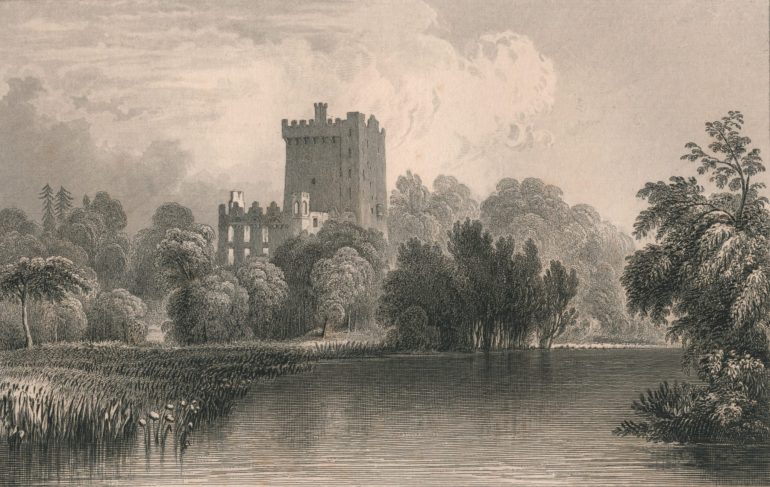 Built in 1446 by the McCarthys of Muskerry, Blarney Castle has its own prominent history. Indeed its name may have been coined by none other than Queen Elizabeth I.

It’s said that the Queen wanted the castle, but that McCarthy continually talked his way out of negotiations. The queen called his obfuscations “blarney”. This word has since come to mean charming or flattering talk, exactly the same as the power purportedly given to anyone who kisses the Blarney Stone.

As for Blarney Castle, today it’s partially ruined and located around five miles northwest of Cork in the heart of some of the Republic of Ireland’s most beautiful forests.

What is the Blarney Castle Stone? 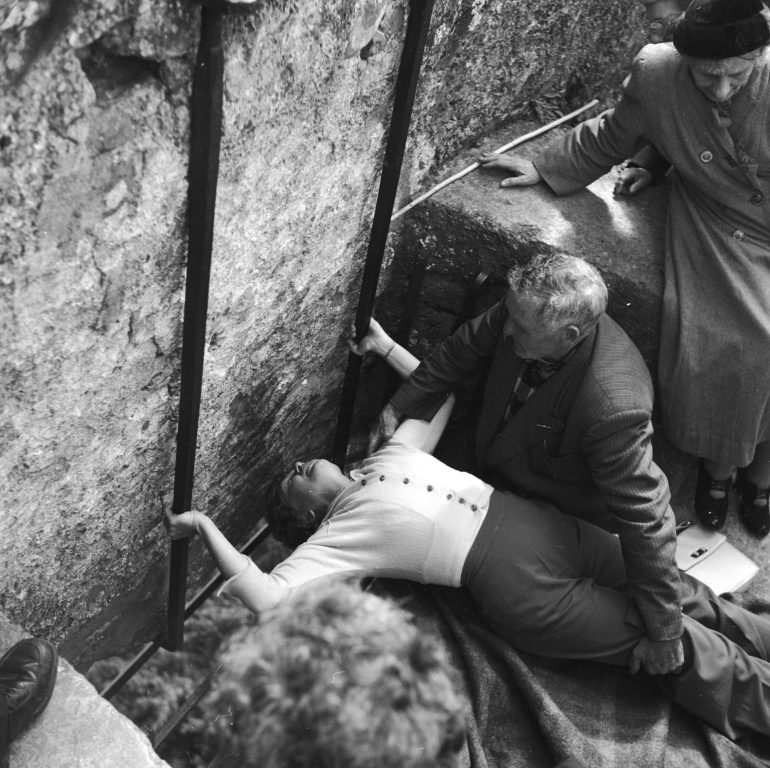 To the uninitiated, the Blarney Stone is unremarkable; a block of carboniferous limestone from the local area set into the battlements of a 15th century castle. This was confirmed in 2014 by geologists from the University of Glasgow. So, what makes the Blarney mystery stone so special? How did it attain such fame? 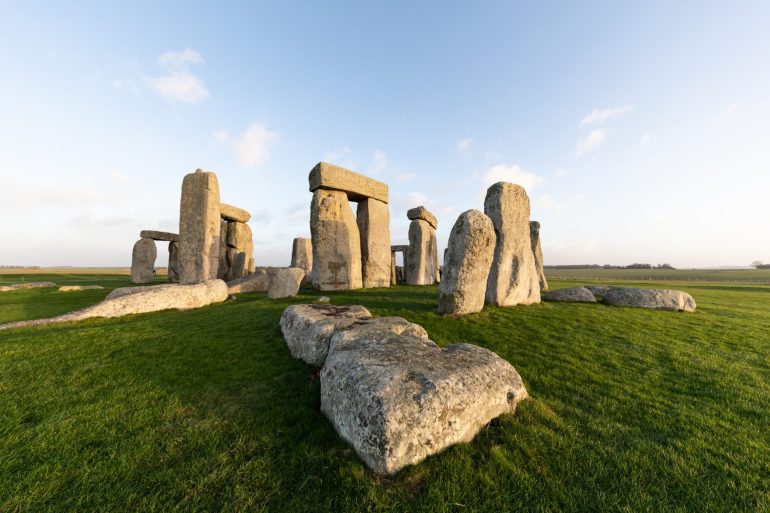 Nobody is quite sure of the origins of the Blarney Castle mystery, although it’s generally thought that the tradition of kissing the stone dates to the 18th century. Whatever the case, legends abound as to the Blarney Castle stone, some even linking it to the Bible, specifically in the Book of Genesis.

The story goes that the rock was used as a pillow by Jacob, patriarch of the Israelites. It was then stolen by Christian soldiers during the Crusades and taken to Scotland, eventually making its way to Cork. Thus it has sometimes been called the Jacob’s Pillow Stone.

Yet, this is just one tale among many. At one time or another the Blarney Stone has been cited as everything from a piece of Stonehenge to the deathbed pillow of St Columba, a sixth century Irish abbott who became the patron saint of Derry.

The Blarney mystery stone is often said to be the Stone of Scone, also known as the Stone of Destiny. This was used for hundreds of years as part of the coronation ceremony of Scottish monarchs. It’s said to have been given to Cormac MacCarthy, King of Munster by Robert the Bruce; a gift for sending men to help the King of Scots defeat the English in 1314 at the Battle of Bannockburn.

Yet another version of the story has it that Cormac MacCarthy was involved in a lawsuit and appealed to the Irish mythological goddess Clíodhna, Queen of the Banshees, for help. She told him to kiss the first stone he saw in the morning on the way to the courthouse and he went on to plead his case with remarkable eloquence and persuasiveness.

‘Tis there’s the stone that whoever kisses
He never misses to grow eloquent;
‘Tis he may clamber to a lady’s chamber,
Or become a member of Parliament.

A noble spouter he’ll sure turn out, or
An out and outer to be let alone;
Don’t try to hinder him, or to bewilder him,
For he is a pilgrim from the Blarney Stone. 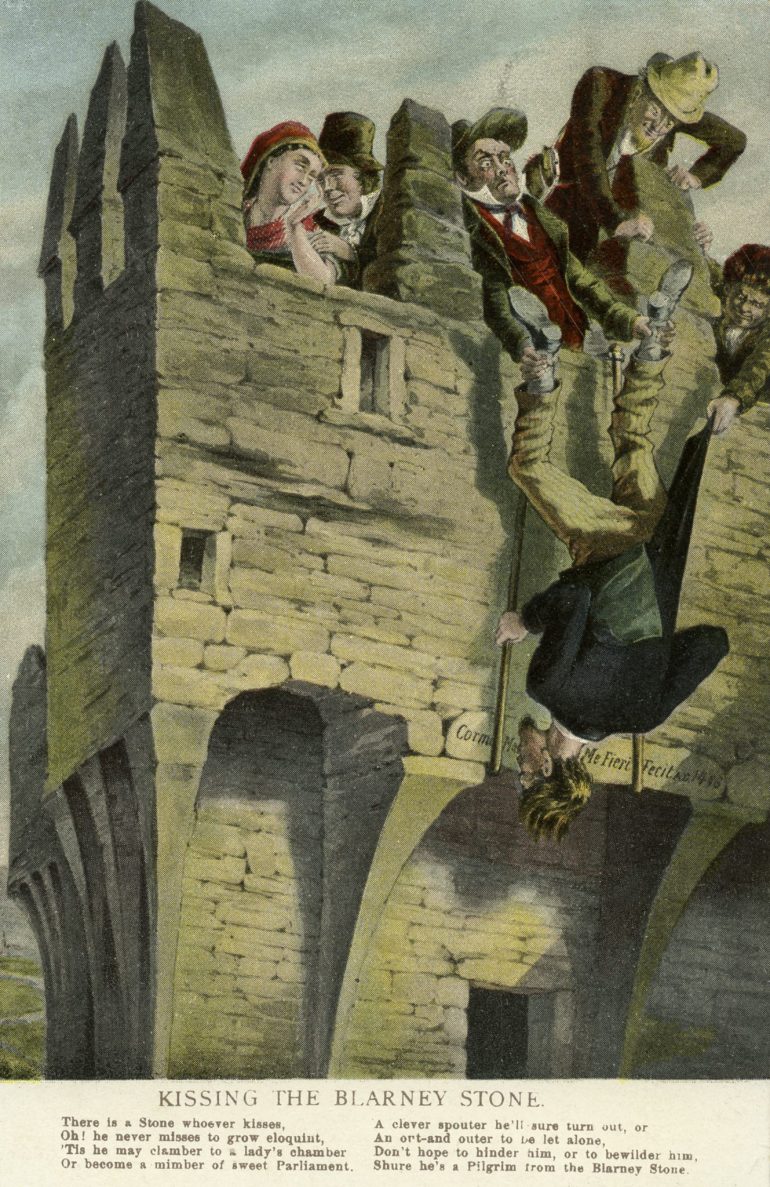 Kissing the stone requires a certain amount of physical dexterity and in the past, more than a little nerve.

Today, you lie on your back on a padded mat over the parapet with your head tilted as far back as it will go. You kiss the stone while being supported by castle staff with wrought-iron handrails and supporting cross bars underneath, thanks to modern health and safety laws.

In days gone by however, the ritual posed genuine danger to life and limb. Those brave enough were held by their ankles over an open hole and then pulled back up again.

So now you know the story of the Blarney Stone legend. From mystery goddesses and biblical pillows to an angry queen and a thankful king, it’s been quite the adventure.