Makers of arguably the world’s most iconic sports car, Porsche is one of the great automobile manufacturers. It is a brand defined by beautiful, fast and expensive cars that have been desired and admired all over the world for over 70 years. In the 90s, Porsche produced some sensational cars, and here we explore the very best Porsche models from the nineties.

After pushing automotive boundaries with the Porsches of the 1980s, for the iconic German manufacturer, their 1990 models ushered in an age of unrivalled excitement. These 90s Porsches saw incredible feats of technical innovation and engineering excellence, with the dawn of some of the most amazing cars ever produced. 1990s Porsches paved the way for today’s sports cars, supercars and even hypercars. 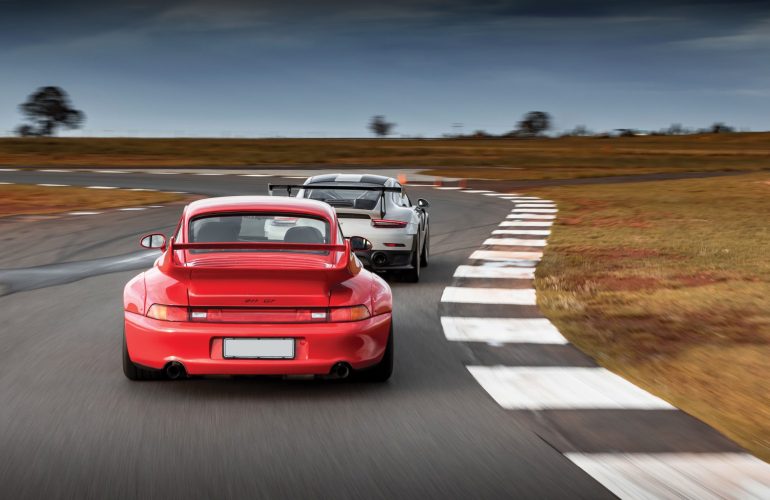 The nineties was a huge turning point for Porsche. The one millionth 911 rolled off the production line and the range was getting ever stronger, which included one of the best mid-engined sports cars of all time.

The 928 was with us from 1977 to 1995 but for the final three years of its life, Porsche created the fantastic GTS, and what a swansong. The Gran Turismo Sport’s outstanding 5.4-litre V8 chucked out 345hp. The grip, handling and speed were streets above anything else in its class. Rather like the 944 Turbo, the 928 GTS was a 90s Porsche with attitude and it has gone down as a true classic.

Born out of the GT racing world, what is known to most of us as the 911 GT2 was a car so outrageously brutal it had almost mythical status. One of the best of all 1990s Porsche models, the GT2 had a 3.6-litre, air-cooled, twin-turbocharged flat-six with 444hp, a 0-60 time of sub-four seconds, and a top speed of 187mph.

This was a car that had the ability to relocate your internal organs when you pressed the pedal to the metal. It was extremely quick, extremely rare. If you’re ever offered an opportunity to drive one, it’s fair to say you’ll need to be very, very careful.

Introduced in 1999, the GT3 was conceived only to fulfil Porsche’s requirements to make a very small number of road cars to qualify for entry in FIA races. They needed to make 200 but demand was such they ended up making almost 1,900. Essentially it was a raw, stripped out 911 – no rear seats, no rear speakers, no sound deadening, no sunroof, no air-con. It delivered near-perfect grip and handling, from the naturally aspirated 3.6-litre flat-six that traced its roots back to the Le Mans racers from the 70s and 80s. This was a seriously quick car – brutal and uncompromising. The 911 GT3 was a true driver’s car, that made you work for every turn. Hailed as the last of the old-school 911s, it was without doubt one of the best of the 1990s Porsches.

Launched in 1991, the 968 was initially designed as a stop-gap between the end of the 944 and the beginning of the Boxster. Yet for those in the know, it was a fine car, massively underrated as one of the best Porsche models of the nineties. The last new front-engined car from Porsche until the Cayenne arrived in the early 2000s, it was sold for its engineering rather than its looks.

The 3.0-litre engine produced 237hp and reached 60mph in 6.5 seconds. Despite its outstanding handling and superb build quality, the British public turned its back on the 968, equating it with the last knockings of 80s excess. Coupled with a period of financial hardship, Porsche also turned its back on it, opting to load the deck with the Boxster. Turns out, they made the right choice.

A hefty step-up in power, price and personality from the MX-5, the Porsche Boxster (a mash-up of the ‘boxer’ engine and ‘roadster’) was – and remains – a thoroughbred yet practical two-seater sports car. It set the standard for how cars in this class should drive and handle.

The outgoing 928 was the past and the Boxster was the future. It was also cheap(ish), otherwise known as ‘outstanding value for money’. It launched with a 2.5-litre flat six offering a very respectable 0-60 time of 6.7 seconds and a top speed of 149mph. Not only was it head and shoulders above the new breed of two-seat roadsters, it was authentically and unmistakably Porsche. 1990 models didn’t get much better than the Boxster.