How Violins are Made

Whether mournful or merry, part of a classical orchestra, a folk solo or club anthem, the versatile violin has made music since the mid-16th century. But how are violins made? And what are violins made out of? Read on to find out.

How violins are made has altered very little since they first appeared in Europe in the mid-16th century. The 19th century saw the fingerboard lengthened and the bridge raised, but otherwise this wooden string instrument or “chordophone” remains largely unchanged.

The hollow body still has its trademark hourglass shape, leading into a long neck. It’s still mainly played with a bow, but is also able to be hand plucked. Most intriguing of all, the answer to the question “how are violins manufactured” remains – almost exclusively – that they are made by hand, by violin makers or “luthiers”.

How are Violins Made? 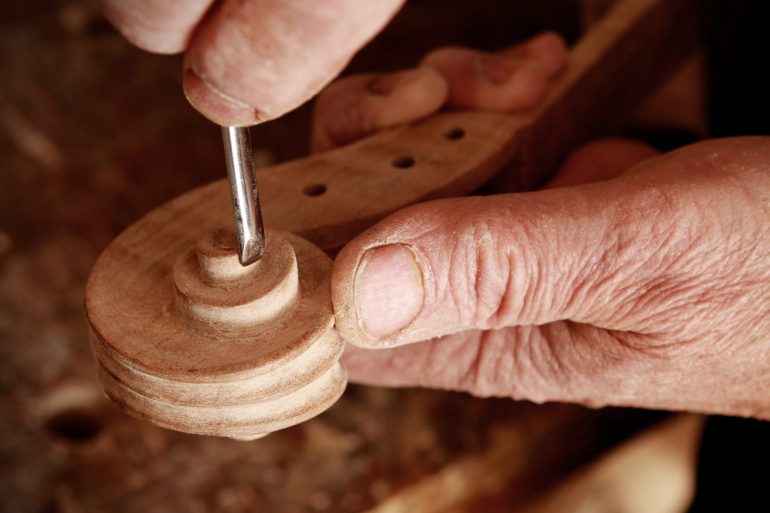 How violins are made is an intricate carpentry process involving much carving, sawing, chiselling and shaping of the wood. The latter is often done using a tool called a plane, which is used to shave along the surface of the wood, allowing for the creation of smooth slopes and ridges as well as precision thicknesses.

The joining or attaching of violin parts is usually achieved either by tension or with glue. Animal hide glue is favoured for its almost seamless joins, easy removal and ability to layer wet glue atop dried, providing a balance between durability and ease of dismantling for repairs. This arrives as flakes which are melted down into a liquid.

What are Violins Made Out Of? 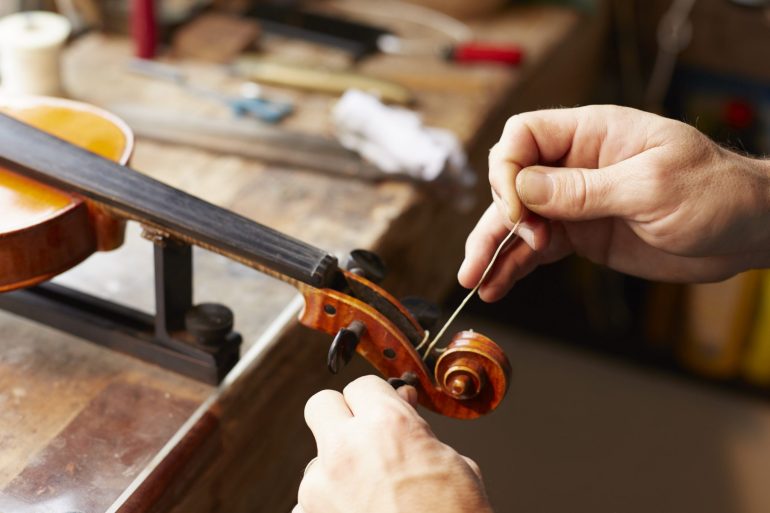 Answering the question “what are violins made of” requires a quick summary of the main parts of the instrument, including:

As for the materials used, the majority of a violin body is generally made of lightweight, dense woods – usually maple, spruce or a combination of the two. For example, the back and sides may be made of maple, while the front might be spruce. The fingerboard is traditionally made of ebony, this dark wood offering the required hardiness for the part of the violin that experiences some of the most wear and tear. Other types of wood may also be used, such as Brazil wood for the bow and sycamore for the ribs.

Violin strings are often made of sheep intestine (known as catgut), steel and nylon, while the bow is horsehair and hardwood. Approximately 170 of the straightest strands of horsehair are formed into a ribbon to make the bow.

Finally, several of the fittings on a violin will be made of other materials, such as plastic.

A final quick note on the question of “what are violins made of”. The above materials are still the most commonly used, but synthetic alternatives are on the rise. For instance, vegan bows can be made entirely of synthetics.

How are Violins Made? 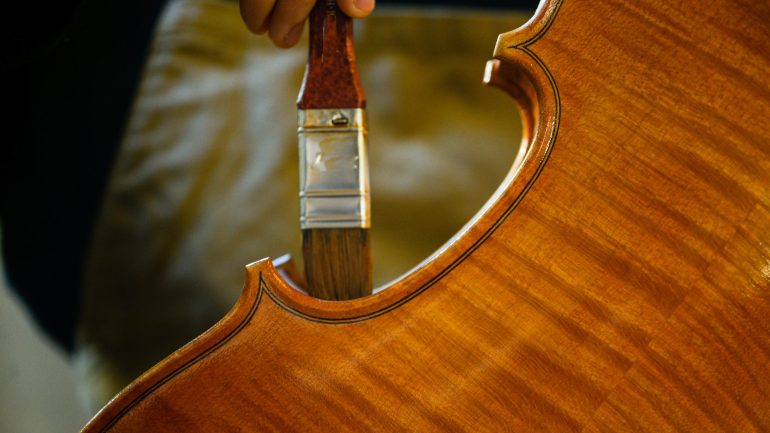 Having examined the question of “what are violins made of”, let’s turn to the crafting process itself, which follows several different stages.

The First Step: The Back

To make the back of the violin, a process known as butterflying is often used. This involves splitting a piece of wood lengthwise to create two slimmer, mirroring slabs. These are glued together along one length each and clamped in place for about four hours until dry. The clamps are removed and shaping can start. First, the surfaces are smoothed, before a template is used to draw and then cut the outline shape. Next, the wood is levelled and shaved, so as to create two even slopes peaking at the centre. The maximum thickness of the wood is likely to be in the region of 3.5mm.

Like other stringed instruments, violins tend to have a decorative groove running along the outer edges of its surfaces, known as purfling. This is carved and a thin strip of wood glued inside, offering extra reinforcement against cracking and extra flexibility. The back of the violin is finished by shaping and smoothing its other side.

How are Violins Manufactured: The Front

The front, known as the “soundboard” or “belly”, of the violin might also be made by butterflying, but is more likely to be formed of one piece of wood. In either case, the process is similar to that of forming the back. However, two curved openings called “F holes” are carved into it, from which the sound emerges. A long “base” bar glued to the inside of the belly provides extra support.

How Violins are Made: Connecting the Pieces

The sides or “ribs” are made by curving thin strips of wood into shape around a violin-shaped form. First, the strips are soaked in water, then pressed with a hot bending iron before being arranged around the form. As the strips are too thin to bond well, cubes of wood are glued onto the inside of each rib join. The shaped ribs are clamped into place around the mould and left to dry for around four hours.

The body is now assembled and glued together. The glue bonding the ribs and top of the violin is weaker than that used elsewhere, allowing it to be opened for any future repairs.

How are Violins Manufactured: The Neck

In terms of “what are violins made out of“, luthiers are skilled at minimising the number of pieces used. For example, the long thin neck of the violin and the scrolled head at its tip are made of a single piece of wood – cut, carved and shaved into shape. Likewise, the fingerboard is made of one piece of ebony. Both are glued to the body. Finally, holes are reamed into the top sides of the neck, ready for the pegs around which the strings will eventually be wound.

How are Violins Made? Varnishing

Varnishing the violin is no afterthought in the process of how violins are made. Aside from determining the finish and colour of the violin, it’s every bit as integral to the sound as the wood it coats. Making the varnish is a chemistry unique to each luthier, and each batch can take weeks to prepare. The application process also takes days and possibly longer, with somewhere between three and six coats of varnish applied and dried in turn. Finally the violin is oiled, again in several layers, to a smooth finish.

How Violins are Made: Set-up

With the violin assembled and varnished, the main steps in the process of how a violin is made are complete. It’s then time for the ‘setup’ stage. This is when the lathier attaches all the small pegs, pins and other parts that keep it tuned and working. For example, the sound or “soul” post supports the belly and conducts vibrations, while the bridge anchors the strings. Both of these are lodged rather than glued in place, the bridge between the body and strings and the sound post inside the body between the back and belly. Other final fittings include two endblocks, the tuning pegs, the tailpiece, a chinrest and, of course, the strings. There are usually four strings on a violin, with E being the highest then A, D and G, all of which are threaded through the tailpiece and wound around the tuning pegs.

How are Violins Manufactured: The Bow

The wooden parts of the bow are crafted similarly to the body. Once properly bunched, the horsehair ends are bound with thread, burned and wax-sealed, then one end placed in the small wooden box called a bow frog. The other end is wound taut onto tension screws at the head of the bow. To add to the friction of the bow, a pine tree resin called roisin is rubbed onto it.

How are Electric Violins Made? 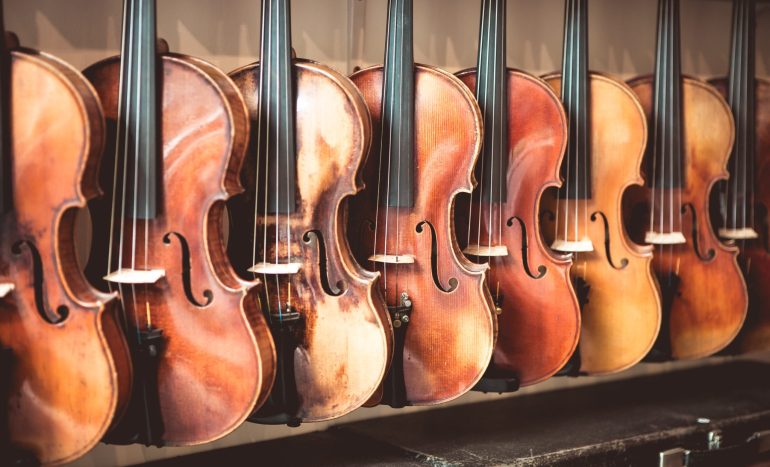 Electric violins have electric components such as a pickup and an amplifier jack, but are otherwise similar in many respects to classical violins in terms of parts and materials. The main difference is that they do not have a hollow body. They don’t need it as they don’t have a sound bar. In terms of “how are violins manufactured”, this means their body can be made entirely of one piece of wood. Some electric violins are made of ash wood. And some manufacturers use machines and 3D printing in parts of the process.

How are Violins Manufactured Worldwide? 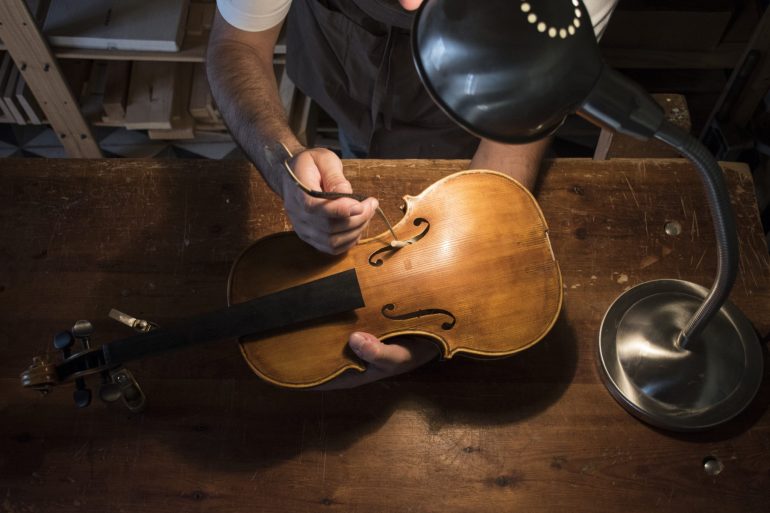 Adjusting the sound post of a violin (Photo: Westend61 via Getty Images)

While China is now the biggest maker of violins, exporting 1.5 million to Italy’s under 7,000 in 2019, this has not led to major changes in how violins are made. Chinese manufacturing is also done by hand, albeit on an assembly line. However, the new ways of making electric guitars may signal future changes in the time-honoured process of how violins are made.