How Stamps Are Made

These thumb-sized rectangles have been used to pay for postage since the 19th century, but how stamps are made is little understood. So, how are postage stamps made? We’ve got it licked.

The history of how stamps are made can be traced back to the first ever adhesive postage stamp, the Penny Black. First released on 6th May 1840, the British Penny Black stamp was engraved with the profile of a 15-year-old Queen Victoria’s head and marked a leap forward in the payment of postage.

The method used to make the Penny Black in the 19th century is known as intaglio, a method that remains relevant when answering “how are stamps manufactured”. We’ll explore this as well as some of the other common ways of making postage stamps, including letterpress, planographic and embossing. We’ll also ask: how are stamps made today, and how has the process evolved?

How are Postage Stamps Made? Modern Processes 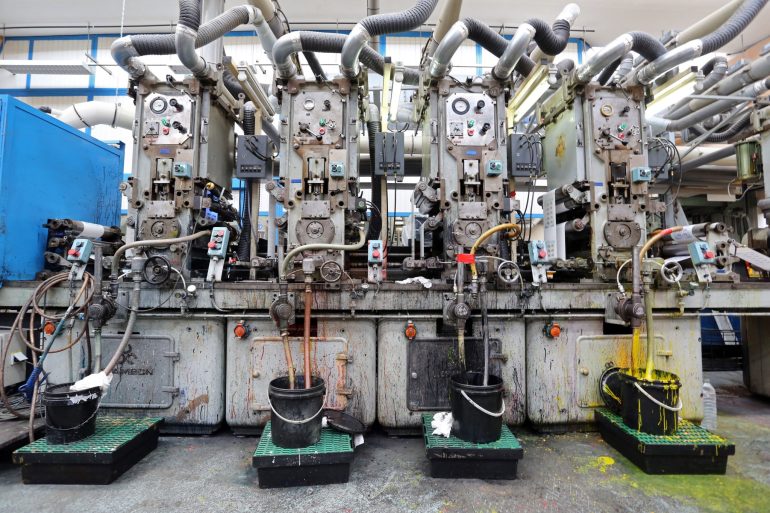 Although significant advances have been made in the world of printing, many of the basic processes used in the past are still used in how stamps are made today, albeit with updated elements such as computer-generated designs. So, while the designs for stamps have long been engraved on metal plates or “dies”, which print it onto adhesive paper, the methods of making those dies have evolved.

Other advances in our answer to “how are stamps manufactured” include the use of vast rolls of pre-gummed stamp paper, instead of individual sheets. Some of these can stretch up to three miles long. Which brings us onto cutting. Precision cutting machines are used, both to cut the perforated outlines of individual stamps, and to size the sheets or rolls for sale. Advances in types of adhesive has also meant a shift from stamp licking to stamps ready for sticking.

How are stamps manufactured? Intaglio

The word intaglio means “engrave” in Italian, which is a good starting point for describing how this process works. The stamps are printed using high pressure rollers to squeeze together the stamp paper and a metal plate engraved with the required design.

So, how are postage stamps made using this method? The bulk of the work is in the engraving, in which the design is carved as grooves or indents in the metal plate. Sometimes this is done with tools alone, known as “dry”, and sometimes with the aid of a special acid or other chemicals. These subsets of intaglio are known as dry-pointing and etching respectively. A type of etching known as photogravure is still used today to make more expensive stamps. This is discussed in more detail below.

To get the design on paper, the ink is spread in a layer across the whole plate, where it settles into the engraved recesses. Any ink not in the grooves is wiped off. When the plate and paper meet in the rolling press, the ink design is transferred. A side effect of this method of how stamps are made is that the paper tends to impress into the recesses, giving it raised ridges in those places.

How are Postage Stamps Made? Letterpress

Letterpress stamp printing, also known as typography or surface printing, is similar to intaglio, but the working of the metal plate is inverse. Instead of being recessed, it is raised from the metal plate. The design thus reaches the paper from the protrusions in the die. Whilst older than intaglio as a process, it wasn’t used to print postage stamps in Britain until 1855. It would remain in use for more inexpensive stamps until 1934.

How are Stamps Made? Photogravure

For how stamps are made with colourful, more complex designs, the method of making the die or metal plate can be done via Photogravure. This incorporates photographic methods with those of printing. Here, the computer generated design is laser printed onto the die as a series of tiny dots known as a dot-matrix. A chemical on the die causes these dots to make indents into its surface. These will vary in size and depth, which will allow for variations in colour intensity.

Just like a home printer, a mix of four colours – cyan, magenta, yellow and black – is used to create multiple hues, allowing for pretty much any shade or colour to be included. Each of the basic four colours gets its own die, which are then applied to the stamp paper in turn to form layers. The process then follows the steps of how stamps are made via intaglio as described above.

How are Stamps Manufactured? Embossing 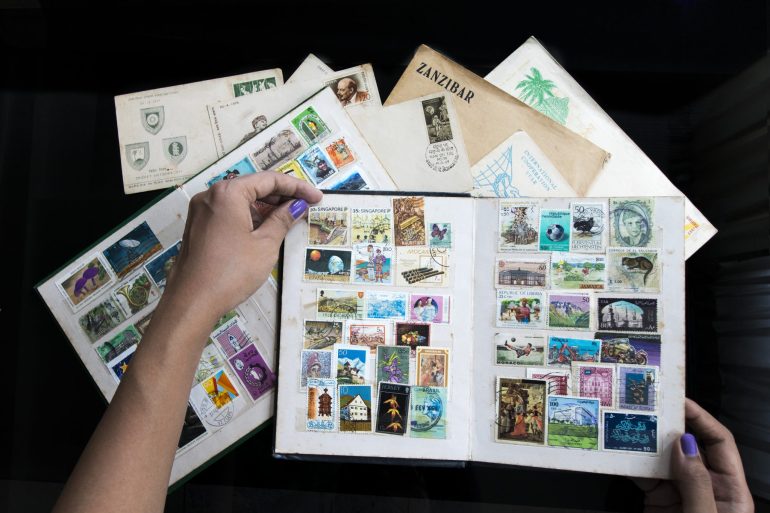 In terms of “how are stamps made”, this method is rarely the answer, but has been used in the past and produces uniquely shaped stamps. This is a combination of intaglio and letterpress, with the paper being stamped between one recessed and one protruding plate, creating ridges on both sides.

How are Stamps Manufactured? Planographic Printing 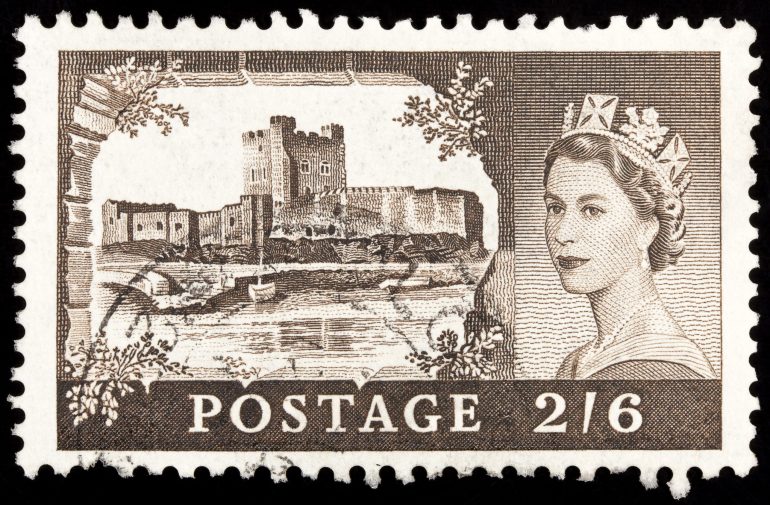 There are three main planographic methods, namely lithographic, offset and photolithographic. These use chemical separations, traditionally the immiscibility of oil and water, to transfer a design onto a stamp. Unlike previous methods mentioned, the die in planography is completely smooth. The image is imprinted on the die with an oily, inky chemical, while the rest is filled in with a water-based one.

How are Postage Stamps Made? Lithography

Lithography is the oldest form of Planographic stamps, being used since the mid-19th century, and in which the ink is applied to the paper directly from the plate. Offset lithography involves transferring the ink from a stone or metal plate onto another surface, usually a rubber sheet attached to a roller, and it is that which stamps the paper.

How are Stamps Made? Photolithography

Planography has generally been considered better at creating sharper images than those on letterpress or intaglio stamps, but is less secure thanks to the lack of ridges or indents. This has been ameliorated over the years by combining it with other methods such as intaglio.

There is also a more recent advance in planography, sometimes called photolithography. Not unlike using a high-tech stencil, this process involves selectively exposing a light sensitive material, known as a photoresist, to UV light. When it is exposed to light, the photoresist is overlaid with a photomask. This is an emulsion-coated aluminium sheet that has been laser printed with tiny holes in the shape of the stamp design. The light only reaches the photoresist through these tiny holes in the mask. Those light-exposed parts dissolve, revealing the pattern. This creates the die which can then be used in the lithographic printing process.

How are Stamps Made Secure Against Forgery? 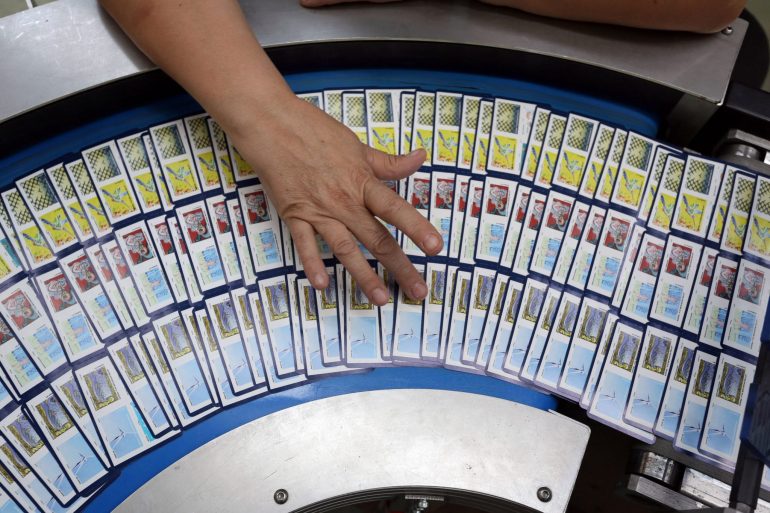 There are ever more sophisticated anti-forgery methods in use today. For example, phosphoric ink can be used to create hi-tech imprints only visible under special lighting. And cameras track every step of the production line. The few companies charged with making stamps are just as focused on security as on printing, to the extent that their printing methods are not generally publicised.

The Future of How Stamps Are Made 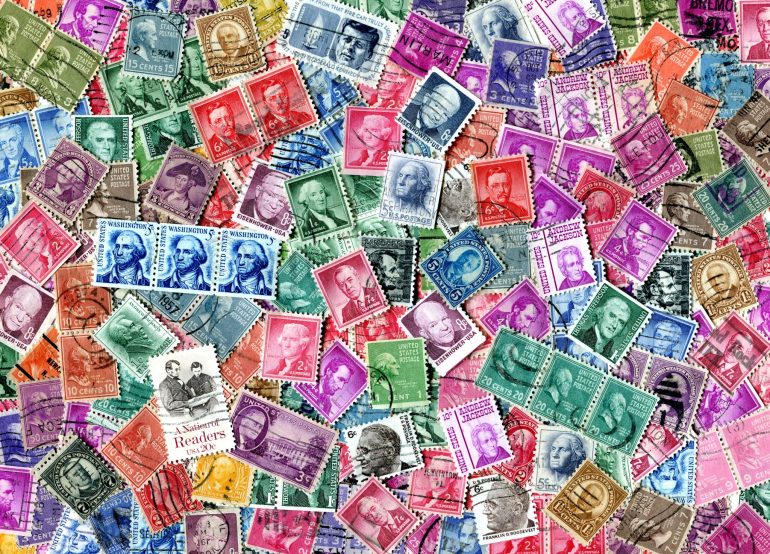 Presidential Stamps From The United States Of America (Photo: traveler1116 via Getty Images)

In 2022, many first and second class stamps began being taken out of circulation to make space for new barcoded stamps. This is yet another advance in the fight against forgery. Of course, one of the most significant advances is the fact that stamps – or rather postage – can now be printed in a much more accessible way: On home printers. Whether this will eventually mark the end for paper stamps is yet to be seen.

Well, that’s the issue of how stamps are made well and truly packaged up. Hopefully these answers to “how are stamps manufactured?” will send you away with all the information you need.