A classic Korean delicacy, Kimchi is high in vitamins, antioxidants and minerals and low in calories and fat. So, how is kimchi made?

It’s a cultural icon. It’s been to space. UNESCO even lists it as a classic part of Korean identity. And it’s a powerful probiotic. For over 2,000 years, this fermented vegetable dish has been a central part of Korean cuisine. And yet, much more than that, it has become part of its people’s heritage. This is kimchi.

So, what exactly is this delightful dish? Well, kimchi is made from fermented cabbage and other vegetables. Often spicy and tangy, it can be a side dish, a condiment or even an ingredient in other recipes.

Given its popularity and health benefits, it’s no wonder people are asking how kimchi is made. That’s what we’re finding out. We’ll answer ‘how is kimchi made traditionally’ as well as exploring some more modern answers to ‘how is kimchi produced’.

How is Kimchi Made Traditionally?

Before asking “how do you make Korean kimchi”, it’s worth looking at its history. Kimchi has been a part of Korean cuisine for centuries, perhaps as far back as the 1st century BC. Its rise is often linked to the spread of Buddhism during the Silla dynasty, especially given its emphasis on vegetarianism.

In terms of answering ‘how is kimchi made traditionally’, one can reflect on the importance of pickling in a world before refrigeration. Kimchi was a way of harvesting vegetables in autumn and preserving them through to winter, when none would grow.

The produce was fermented before being placed in ceramic pots or ‘onggi’ and buried in the earth. It could then be dug up as needed. At that time, kimchi was made with only a few simple ingredients like cabbage, radishes, and salt. These might have been mixed with a paste of fish sauce, garlic and chilli.

Over the centuries, kimchi has grown in popularity and prominence. Families, even regions, have devised their own recipes. It’s said that there are hundreds of kimchi recipes out there.

And kimchi continued its meteoric rise into the 21st century. In fact, in 2008, Korea’s first astronaut took kimchi with her into space. So now onto the main question; how do you make Korean kimchi today?

How is Kimchi Made? 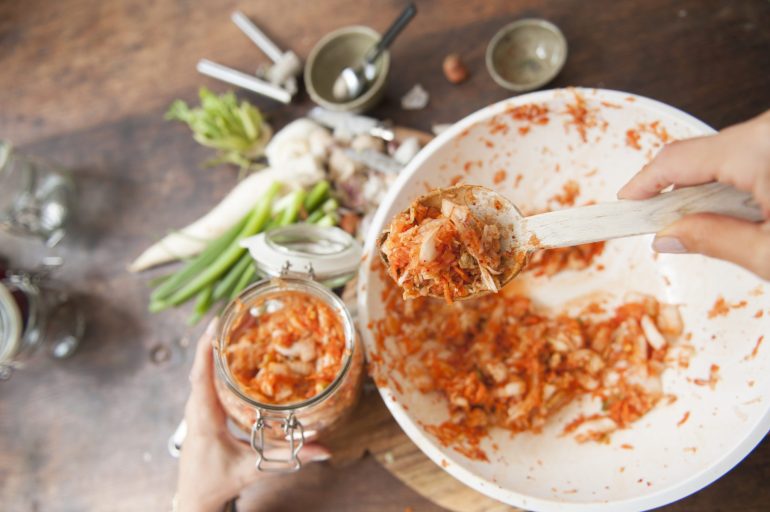 Kimchi is typically made by first salting the vegetables to draw out their water content. The vegetables are then washed and mixed with a variety of spices, such as ginger, garlic, onion, and chilli pepper. This mixture is then fermented, typically for a period of one to two weeks, but often for months or even years. So, how is kimchi produced on a step-by-step basis? What follows is a breakdown of one kimchi recipe.

Vegetables are at the core of kimchi and the first step is prepping them. Some of the vegetables used in kimchi include:

These are peeled and trimmed as necessary, with any wilted leaves removed from the cabbage. The vegetables are carefully washed in cold water. It’s vital that every vegetable is meticulously clean. As part of how kimchi is made, chemical reactions that need to occur could be affected by any remaining sediment or dirt.

Ginger, ginger juice, garlic and chilli flakes are added. The ginger is grated and pressed within a porous cotton bag so as to remove the stringy elements. The final ingredient is salt, which is vital to the fermentation. All of the ingredients are combined and an electric mixer with a dough hook is used to mix them. As the salt disperses within the mix, it activates the fermentation process.

The mixture is tightly vacuum packed within special fermentation containers and squeezed under ceramic weights, encouraging the juices to flow. It’s stored like this for a period of time, typically a few weeks, but sometimes a year, maybe more. During this time, the bacteria will break down the sugars in the vegetables, resulting in the production of lactic acid. This lactic acid will give the kimchi its characteristic sour taste. Once fermentation is complete, the kimchi is often refrigerated to further slow down the growth of bacteria.

Finally, the kimchi is put into jars, filled to the top. Any air pockets between the kimchi and the lids will decrease its shelf life. The jars are labelled and the lids are shrink wrapped, ready to go. This is the final step in the process of how kimchi is made, answering both ‘how is kimchi made traditionally’ and ‘how is kimchi produced’ today. 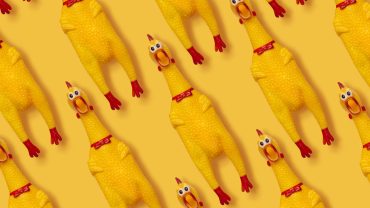