How Ketchup is Made

Whether on burgers or fries, hotdogs or sandwiches, tomato ketchup is a king amongst condiments. But just how is ketchup produced? From how ketchup is made in a factory to the trick to creating the homemade variety, read on to discover it all.

It goes on burger buns and is drizzled on fries, used as a dip, a sauce and an ingredient in other recipes. At one point it was found in 97% of all homes in the US. As far as condiments go, they don’t come much bigger than tomato ketchup.

But how much do we really know about that iconic bright red bottle in our kitchen? For example, how is ketchup made? How is ketchup produced in such large quantities? Come to think of it, where did it come from in the first place?

That’s what we’re here to find out. We’ll explore how ketchup is made in a factory as well as at home.

How Ketchup Is Made: A History

It may be considered quintessentially American, however the likely birthplace of ketchup was not the US, but China. Many food historians trace it back to a centuries-old Chinese sauce known as “koe-cheup” or “ke-chiap”, which became popular on trade routes due to the ease of preserving it over long journeys. British traders are thought to have introduced it back home sometime in the 18th century.

Ketchup’s ancestor was very different from the tangy sauce we know today, not least because it didn’t contain tomatoes. It was, in fact, a salty fermented paste with ingredients ranging from soybeans to fish entrails. The British used several vegetables as a base in their “katchup” recipes, but the first tomato didn’t enter the fray until 1812, in the form of a recipe by American scientist James Mease.

It would take another 64 years for Heinz to start selling their tomato sauce, finally giving it the name “ketchup”. We’ll shortly look at how ketchup is made in a factory. First, how is ketchup made at home?

How Tomato Ketchup is Made: Homemade Ketchup 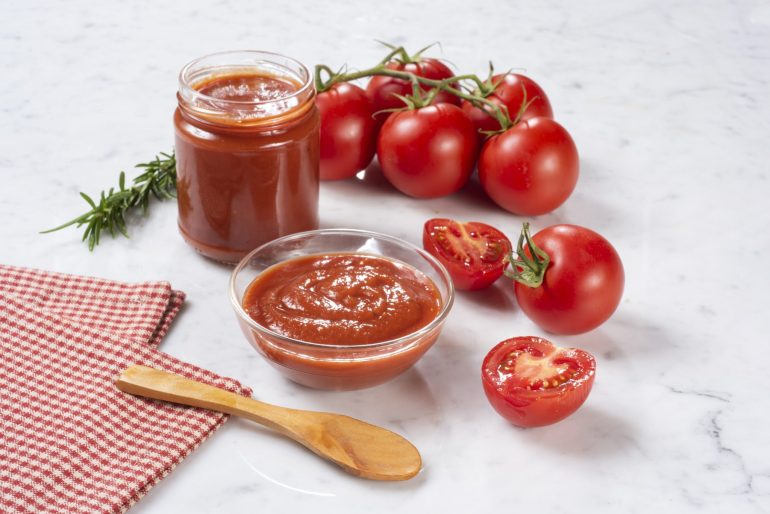 How tomato ketchup is made at home differs depending on the recipe, but the main ingredients tend to include:

To make the ketchup involves sauteeing the onions before adding most of the other ingredients and then allowing them to simmer for just under an hour, stirring periodically until the mixture thickens. Then it’s just a case of blending it all together until smooth.

So that’s the homemade version. Now let’s look at how things are done differently in how ketchup is made in a factory.

How is Ketchup Made? 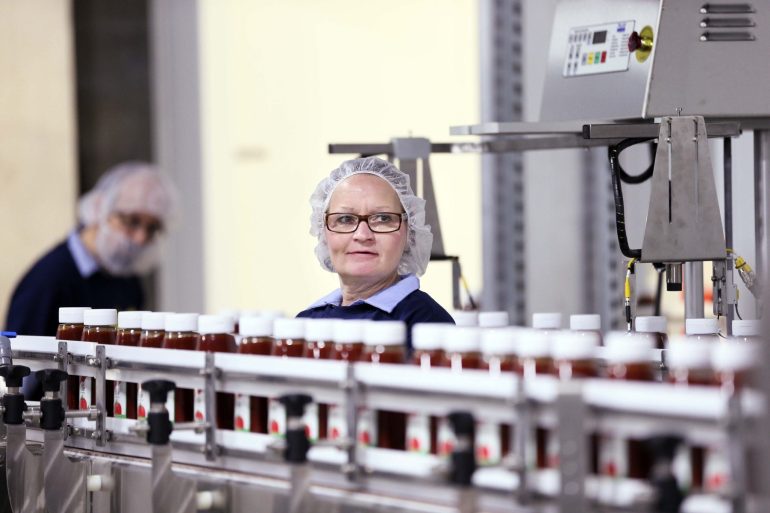 In terms of how ketchup is made in a factory, it’s safe to say that everything involved is on a massive scale.

Let’s take as an example, the process in one of Heinz’s ketchup factories. Based in the Netherlands, it makes an astonishing 175,000 tonnes of ketchup a year. That’s 1.8 million bottles each and every day. This requires industrial sized equipment and constant monitoring of each stage by a well-trained team. Think giant stainless steel vats, gleaming machinery and lots of PPE and you’re on the right track.

So, what ingredients go into ketchup? Looking at Heinz again, the full recipe is one of the best kept trade secrets around, but it’s known to be made up of five main components:

So, we know what goes into the bottle, but how? Let’s look at how tomato ketchup is made step-by-step.

How Tomato Ketchup is Made 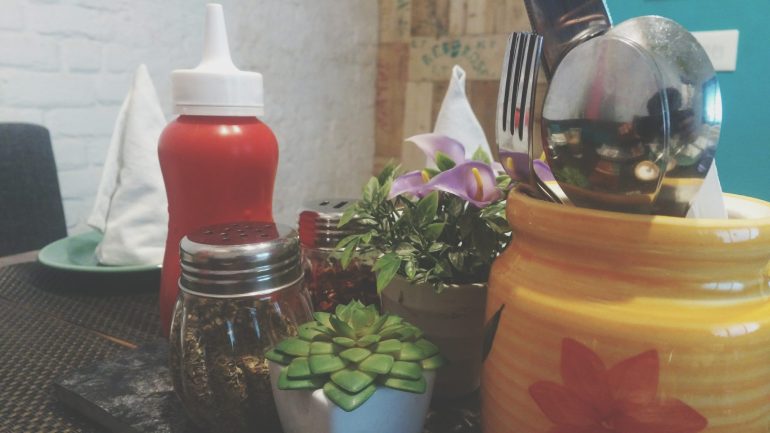 The tomato paste forms the base of how tomato ketchup is made. This thick, deeply concentrated form of tomato puree is made by a “break down” method, usually entailing cooking fresh tomatoes at around 90 degrees celsius until they release their juices. These juices are then cooked off, leaving only the paste. The paste is stored in enormous plastic sacks in a warehouse, ready to play its starring role in how ketchup is made.

How Ketchup is Made in a Factory 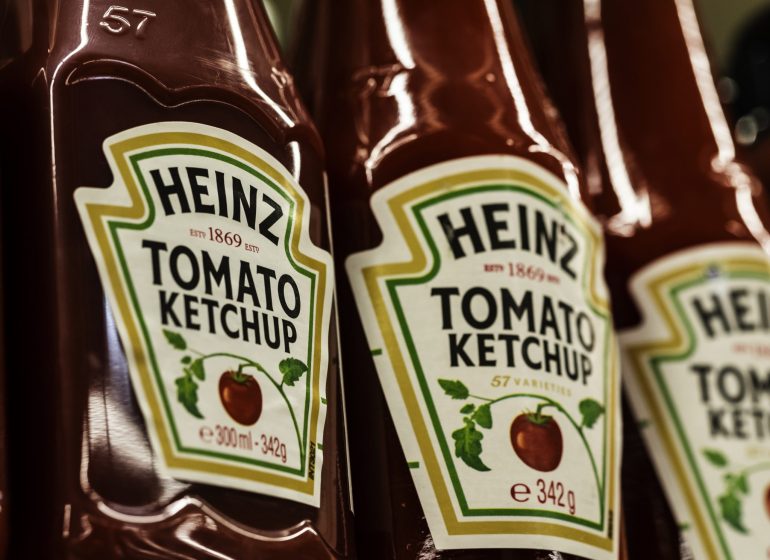 The bags of tomato paste arrive at the factory inside enormous crates weighing roughly 1.2 tonnes. That’s heavier than two grizzly bears and has to be moved around by forklift. In order to extract all that paste, the bag is emptied out of the crate and into the aptly named paste dumper machine. With its large rollers, this machine squeezes out the paste into a metal container. Not an ounce goes to waste, with any remnants on the rollers hosed off with water and in with the rest. That paste is then mixed with water, smoothing its consistency before it is transported into storage vats, ready for use.

So, how is ketchup produced? In a kitchen of course. The area where ketchup is mixed and cooked is known as the ketchup kitchen. The first step is adding all the other ingredients to the diluted tomato paste. Each ingredient is measured entirely by hand before being tipped into the mixer containing the paste.

Homogenisation makes the ketchup consistency thicker and smoother. In a very literal sense, it makes all the particles within it the same, uniform size. This is achieved either through a high pressure machine or chemically using xanthan gum, starch or other thickening agents.

Other processes the ketchup may undergo include pasteurisation to extend shelf life and aeration to remove oxygen.

A vital aspect of how tomato ketchup is made is quality testing. In addition to taste, its texture, specifically its viscosity, is a vital indicator of this. Heinz has a surprisingly low-tech method of doing this, through a device known as the quantifier. It’s essentially a table top metal ramp with measurement markings along the inside.

Before being signed off, ketchup from each batch is placed at the top of the ramp and released to see how far it travels within ten seconds. To pass the test, Heinz ketchup must tranel no faster than 0.028 miles per hour. Any faster and the batch is removed from sale.

At this stage, the sauce is ready for bottling which is done automatically by a filling machine. Empty bottles are conveyed in a line to pass under filling hats, which squirt the ketchup into the bottles. The amount of ketchup in each bottle is judged by weight. self-adhesive labels are then stuck onto the bottles by the machines. The complete bottles are boxed up and a robot places them on a pallet which is encased in shrink wrap. And that’s that. They are ready to go.

How Ketchup is Made Explained 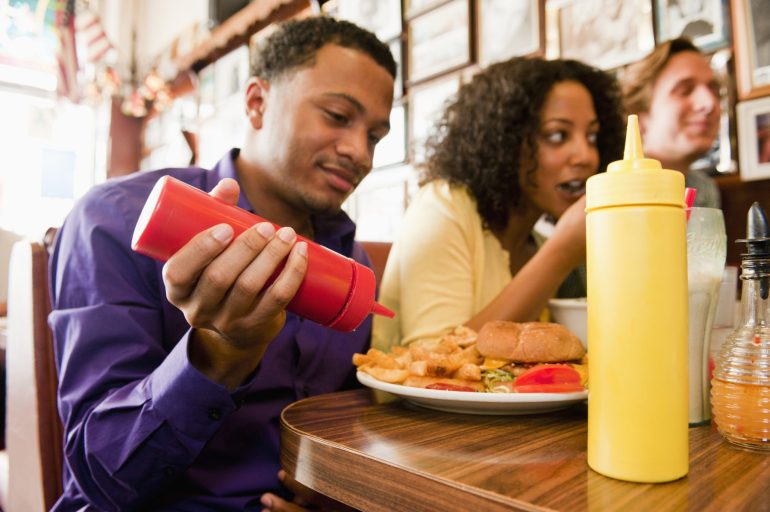 From its unexpected global history to answering “how is ketchup produced”, we’ve squeezed out every last drop of information about one of the world’s favourite sauces. And you know what? Knowing how tomato ketchup is made at home and how ketchup is made in a factory puts that ubiquitous red bottle in a whole new light, we’re sure you’ll agree.