Yogurt is a fermented food made from milk. The fermentation process is started by adding live bacteria to milk, which converts a type of naturally-occurring sugar known as lactose into lactic acid. This gives yogurt its characteristic flavour and thickness. Yogurt is a good source of protein, calcium, and other nutrients, and today there are dozens of different varieties of yogurt on the supermarket shelves, but how are yoghurts made?

From luxuriously creamy Greek yoghurt to fro-yo with all the toppings, yoghurt is a versatile high-protein staple eaten all over the world. Made using bacteria cultures, yoghurt is healthy, nutritious and hugely popular.

In 2020, the UK produced almost half a million tons of yoghurt and it’s believed around six million Brits eat a yoghurt a day, but have you ever wondered how yoghurt is produced in a factory? Like life itself, it all starts with milk.

A Short History of Yoghurt 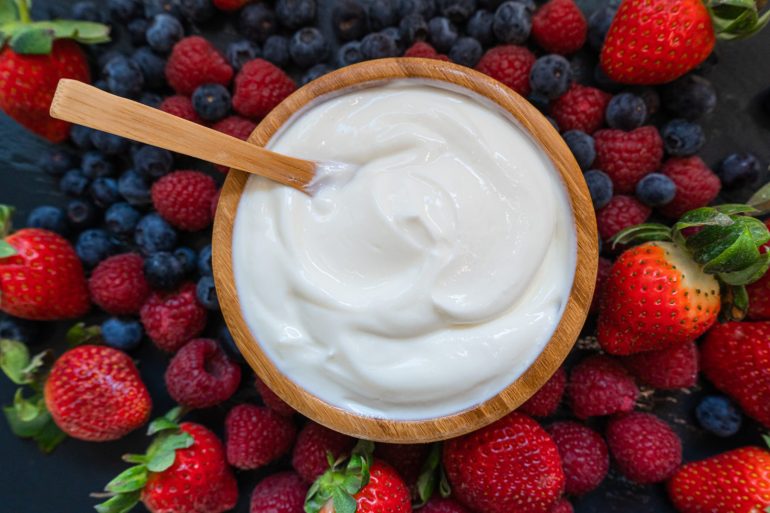 The history of one of the world’s oldest foods is believed to have started around 7,000 years ago in ancient Mesopotamia. It’s entirely likely that its creation was a fortunate accident. Nomadic tribesmen would carry goat’s milk in animal skins and the hot weather combined with the bacteria on the skin would cause the milk to turn thick and acidic, yet still edible.

Ancient Indian records show that people would eat yoghurt with honey with this mix being described as ‘the food of the gods.’ The ancient Greeks also mixed their yoghurt with honey, while centuries later the Mongolian warrior Ghengis Khan attributed the stamina of his soldiers to their regular consumption of yoghurt.

Fast forward to the 1800s, French biologist Louis Pasteur discovered that products such as wine and beer could be heated to kill bacteria that might cause illness. Applying this knowledge to dairy products, pasteurisation allowed milk and yoghurt to become much safer to eat.

By the early 1920s, yoghurt was being produced on an industrial scale. Today, while it’s mostly eaten plain or flavoured with fruit, it’s also an ingredient in many famous dishes such as the Indian dish chicken korma, tzatziki from Greece and labneh, a thick Lebanese cheese dish made from strained yoghurt.

In terms of making yoghurt, if we could go back and ask those nomadic tribesmen how yoghurt is manufactured, we’d probably get a similar answer to the way it’s made today, albeit slightly less mechanical – but for now, we’ll tell you how yoghurts are made.

How Yoghurt is Produced in Factories 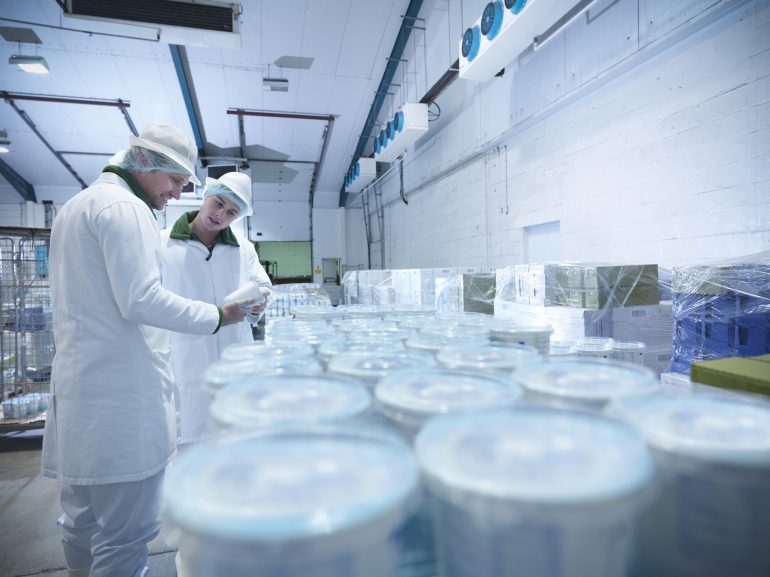 Yoghurt is made in factories in a number of stages – including pasturisation, growth and incubation. Here are the key stages in the process of yoghurt production.

After the milk arrives at the processing plant, it needs to be modified by reducing the fat and increasing the solids. The fats are removed by spinning the milk in a piece of apparatus called a clarifier, which uses centrifugal force to separate the fats from the milk. They are then skimmed off. To produce the perfect yoghurt texture, the solids are increased to around 16%. This is done by evaporating off some of the water and adding milk powder. This also makes the yoghurt more stable, so it’s less likely to separate when stored.

Pasteurisation – heating the milk in a large stainless-steel vat at 85°C for at least 30 minutes – kills off all harmful bacteria that can make us ill, as well as denaturing the milk’s whey proteins. This is perhaps the most important step in the process of how yoghurt is made today. To make a creamier product, the milk is homogenised by forcing the mixture through tiny holes at a high pressure, breaking up the fat globules. This ensures they are distributed more evenly and this results in a consistently creamy end product.

Fermentation of yoghurt is a process that uses bacteria to convert milk into yoghurt. The mixture is cooled down to between 43°C and 46°C and special bacteria, or fermentation culture, known as Lactobacillus are added. The incubation of these cultures takes around four hours. The bacteria consume the lactose to produce lactic acid, which gives yoghurt its tart, tangy flavour. The fermentation process also produces beneficial probiotics, or live microorganisms, that can provide health benefits when eaten.

Go into the dairy aisle in the supermarket and you’ll see dozens of different types of yoghurts. All with different and increasingly exotic flavours and fresh fruit. Flavourings in yoghurt are usually added to the processed milk mixture before it’s dispensed into the carton. Fresh fruit is often added as a bottom layer and the yoghurt is pumped on top. Alternatively, pasteurised fruit can also be added as a puree. This is how yoghurt is produced in a factory. The most popular flavours are usually strawberry, vanilla, black cherry, banana, blueberry and peach but there are loads more on the shelves to choose from.

As with all mechanical processes, the containers are automatically filled, sealed and boxed and sent by refrigerated lorry to supermarkets up and down the country. This is the final stage in the yoghurt manufacturing process. 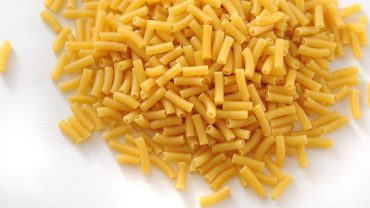 How is Macaroni Made?