How is Vodka Made?

A Cosmopolitan, Moscow Mule, Bloody Mary or a classic Martini (shaken, not stirred), vodka is one of the world’s most popular and versatile spirits and is the star turn in some of the world’s most famous cocktails. It’s been around in one form or another for over a thousand years, but how is vodka produced in a factory? Read on to find out about where vodka came from and we’ll answer the question on everyone’s lips - how do they make vodka?

From its humble start in medieval Eastern Europe to an ultra-competitive £35 billion a year market, vodka today is very different from the first incarnation developed in Russia and Poland.

Translated as ‘little water’ in Russian, vodka is a colourless, odourless spirit traditionally drunk ice cold and neat. It can be made from anything that can be fermented including grains, potatoes, and sometimes even fruit.

In this article we’ll satisfy your thirst for knowledge by answering the question ‘how is vodka made from potatoes!’

There is no definitive answer to the question ‘when was vodka invented’. It has its genesis in Eastern Europe, but the exact origins are somewhat murky.

One theory is that it was created in Russia in the 9th century, while another claims that it was first made in Poland in the 8th century. Regardless, vodka quickly spread throughout Eastern Europe and became a popular drink. It is believed though that the first incarnation of the drink was more like brandy than vodka as we know it today.

One early reference to vodka comes from Poland in 1405. In those days it was used as a medicine, often mixed with herbs and spices. It was also used as an antibacterial agent, the same way we are swabbed with alcohol before an injection.

By the 16th century, vodka was being produced more widely in Russia, and became increasingly popular throughout the rest of Europe in the 17th and 18th centuries.

After World War I, vodka found its way around the world thanks in part to soldiers returning home from the Eastern Front. The production – and consumption – of vodka spread almost exclusively from Eastern Europe to the rest of the world as it was easy and cheap to make in large quantities.

Today, the likes of Absolut, Grey Goose, Smirnoff and Stolichnaya are at the top of the vodka tree, but how is vodka made? You’re about to find out.

How Vodka is Made 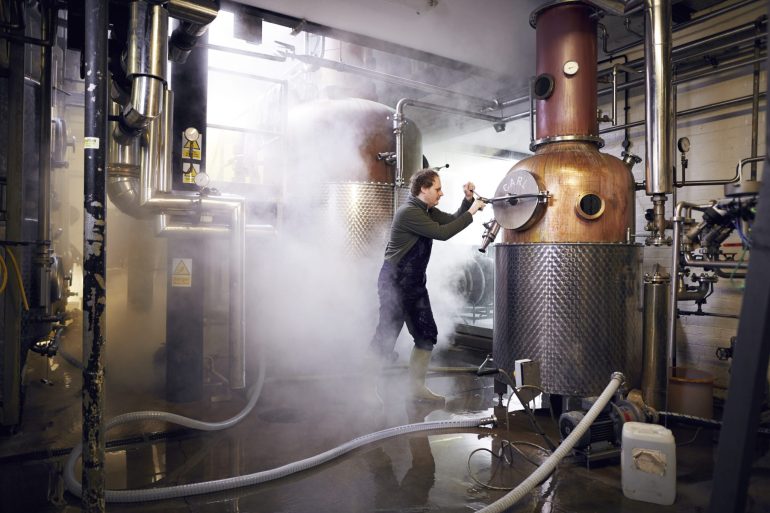 Vodka production begins with the fermentation of the selected main ingredient, which could be potatoes, wheat or rye, or even fermentable fruits. Once fermented, it’s distilled to produce a high-proof alcohol. This alcohol is then diluted with water and bottled.

While ingredients may differ, the process of production in a factory remains exactly the same, though the raw ingredients used will influence the flavour of the finished product.

The process outlining how vodka is made below uses potatoes, which offers a creamier finish on the palate. Here, we’ll answer the question ‘how is vodka produced?’ and will outline the step-by-step vodka production process.

The first step in the process of vodka production is known as the mash, which is the mixture used to produce alcohol. To make the mash, the potatoes are fed into a huge tub rather like a washing machine. As it rotates, arms inside the machine break down the potatoes. Next, a fine malt meal is added which converts the starch into sugar.

When people ask ‘how do they make vodka’, one of the most important elements in the process of distilling spirits is ensuring that no bacteria can grow. The mash is heated to boiling point and then lactic acid is added which raises the level of acidity required for fermentation.

The potato mash – which is very different from the mashed potatoes you have with sausages at dinner time – is moved to huge stainless steel vats. Here, yeast is added to the mix and it’s left for anywhere up to five days. Over that time the enzymes in the yeast convert the sugars to ethyl alcohol.

When we’re talking about how vodka is made, the distillation process is vital. The ethyl alcohol is pumped from the fermentation vats into stills – machines made of vapourisation chambers. The liquid is heated with steam and the vapours rise to the topmost chambers (known as the still heads) where they are concentrated into what is effectively pure alcohol. However in this form the resulting liquid can be as much as 96% alcohol so it’s not yet safe to drink.

Once the vodka has been distilled, water is added to achieve the required ABV, or alcohol by volume. In Europe, vodka must have an ABV of at least 37.5% and in the USA the ABV must be 40%.

Today, as you’ll have seen on the supermarket shelves, vodka can be flavoured with almost anything imaginable including fruit, chocolate, chilli pepper and all sorts of herbs and spices. There are even some leftfield vodka makers who have used bacon, pickles, salmon and tomato! These infusions happen after the distillation where the flavouring is added to the finished product and left to steep for days, weeks or months. 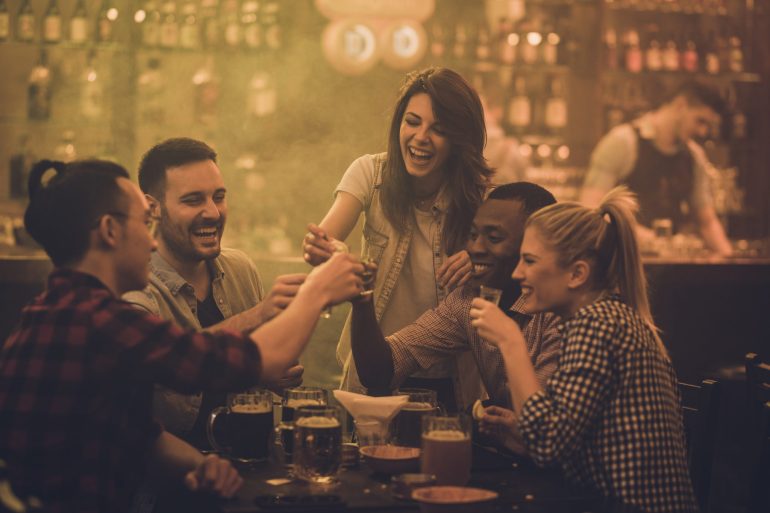 A round of vodka (Photo: skynesher via Getty Images)

Of course any edible or drinkable product must be quality controlled before it leaves the processing plant which must be a tough job for someone. Once it has passed, it is bottled, labelled, sealed and boxed and then shipped out all over the world.

This answers the question ‘how is vodka produced in a factory.’ Cheers!