How Candy Canes are Made

It’s hard to imagine Christmas without candy canes hanging from your tree. Candy canes are a type of sweet made from flavoured sugar and are shaped like a walking stick. They’re typically red and white, but they can be made in any combination of colours under the sun. We all love them, but have you ever wondered how they make candy canes? Read on to find out the sweet-toothed truth.

Like chocolate eggs at Easter, candy canes shout Christmas as loudly as presents and turkey! Almost every tree has candy canes hanging off it and it’s not surprising that almost two billion are made every year.

Almost every single candy cane is sold in the four weeks leading up to the yuletide celebrations. As ubiquitous as they are, how do they make candy canes?

A Short History of Candy Canes

How did this Christmas icon come about? It seems the real story of the invention of candy canes may well have been lost to history, but the tale most often told dates back to the magnificent Cologne Cathedral in 1670.

To keep children quiet during the Christmas Eve service, the cathedral’s choirmaster asked a local confectioner for some sugar sticks. As it was a religious occasion, he requested the sticks have a crook bent into them to remind the children of the shepherds who visited the baby Jesus. Another version suggests he gave them to his choirboys to stop them fidgeting during services.

This tradition spread from Germany to other parts of Europe and on to America, where the first documented use of candy canes adorning a Christmas tree was in 1847. A Swedish-German immigrant by the name of August Imgard decorated his tree with candy canes and paper ornaments and he started a tradition that shows no sign of slowing down.

It wasn’t until the 1950s that an automated machine was invented by a Catholic priest called Gregory Keller to make the classic Christmas confection. Today, almost two billion are hung – and eventually eaten – each Christmas. But how is candy cane produced?

How They Make Candy Canes 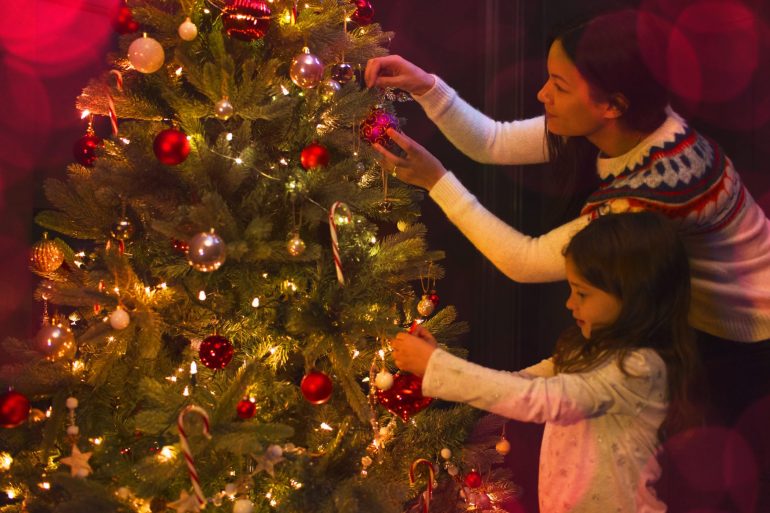 Festivities begin with hanging the candy canes on the tree! (Photo: Caia Image via Getty Images)

Candy canes come in many different colours and sizes. They’re made by melting sugar and then cooling it into long, thin strips. Once the sugar has cooled, it’s then wrapped around a metal rod to form the shape of a candy cane. That’s the most basic summary of how candy canes are made, but the candy cane production process actually gets significantly more complex, and follows a number of key steps.

At the factory, the process of how candy canes are made starts with a big batch of water, sugar and corn syrup. It’s heated to around 140°C until it forms a thick amber-coloured liquid similar in consistency to treacle. Next, they prepare a mix of starch and – usually – peppermint flavouring. As they blend together, the flavouring binds to the starch.

The boiling hot sticky liquid mixture is then emptied onto a water-cooled kneading table to reduce the temperature. Once it’s cool enough, the sugary lump is fed into a machine that folds and stretches the batch repeatedly using shovels until it’s silky white in colour. At the same time, a plunger ensures the flavouring is distributed evenly throughout the mixture. Cold water is piped into the shovels and the kneading table to stretch the candy cane mix to a firmer consistency. This is important for the next stage in the process of how candy canes are made, however some of the mix is kept back to be coloured red.

Automated pullers repeatedly stretch the mixture around a metal post. This both serves to aerate the candy – while turning it snow white – and to make it workable enough to roll it into a fat log known as a loaf. The mix is heated again until it’s pliable enough to be stretched long and thin. As we mentioned earlier, some of the mix was kept back to be coloured red and it’s at this stage two red strips are placed either side of the white strip. Now it’s ready to be rolled.

The huge candy loaf can weigh up to 50kg so it usually takes two people to transfer it to a machine known as a batch roller. The cylinders roll the red and white peppermint-flavoured deliciousness thinner and thinner until it’s the exact diameter of a classic candy cane. It’s kept warm to remain pliable and the long thin candy-rope moves through a wave-like conveyor to give it some slack and to ensure it doesn’t stretch any further.

The long sugary rope now moves through two angled belts that twist it into its traditional spiral. At the perfect length, automated knives descend and cut it in a process that looks like a beautifully choreographed dance. To finish the routine, the arrow-straight lengths of candy – still more of a stick than a cane – are wrapped tightly in cellophane and heat-sealed.

Now it’s time for the candy sticks to become candy canes. Each piece is sent through a machine called a crooker deck to be perfectly curved. While they’re warm enough to be pliable, they remain extremely fragile so it’s a gentle process but one in which the end result is a perfectly-shaped candy cane.

All that’s left is for the canes to be quality controlled – any broken or cracked canes are caught by very detailed cameras and discarded – and then they’re boxed ready to be shipped out all over the world in time for Christmas! This is the final step in the process of how candy canes are made. In fact the entire process from start to finish takes around 30 – 40 minutes, though we’re certain they come to a very sticky end in far less time!