How are drums made? How are steel drums made? Only by knowing how they work and how they are produced can musicians take proper care of their instruments. But even if you don’t play, how drums are manufactured is a fascinating process.

Nobody really knows when the first drums were made. In fact, the first drums may not have been human-made, but simply human. Some have posited that drumming on the body formed part of homosapien development.

Having said that, some of the earliest known drums date back to 5500 BC. Found in China, their top surface was made of alligator skin. But how are drums made today? What about drum kits? And how are steel drums made? Let’s find out in this guide to – drum roll please – how drums are manufactured.

How are Drums Made? The Structure of the Drum 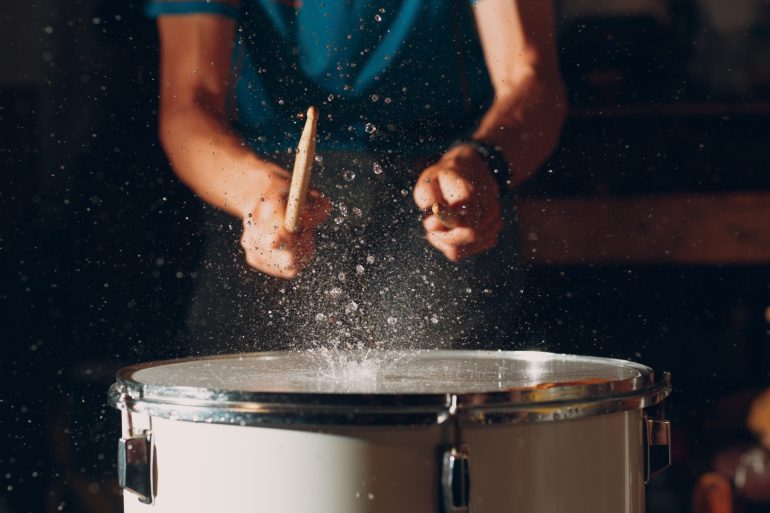 Understanding how drums work is a vital part of discussing how they are made and even how drum kits are made. A member of the percussion family of instruments, in very basic terms, a drum is a stretched surface on a frame. The surface or membrane, which is the part that’s struck, is called the head, while the body is called the shell.

Playing a drum involves striking the head. This can be by hand – as with bongos – with drumsticks, beaters or even brushes.

From the aburukuwa to the zabumba, there are myriad varieties of drum. In answering “how are drums made”, we’ll look at wood and metal shells and the most common head type, which is polyester.

How Drums are Manufactured: Shaping the Sound 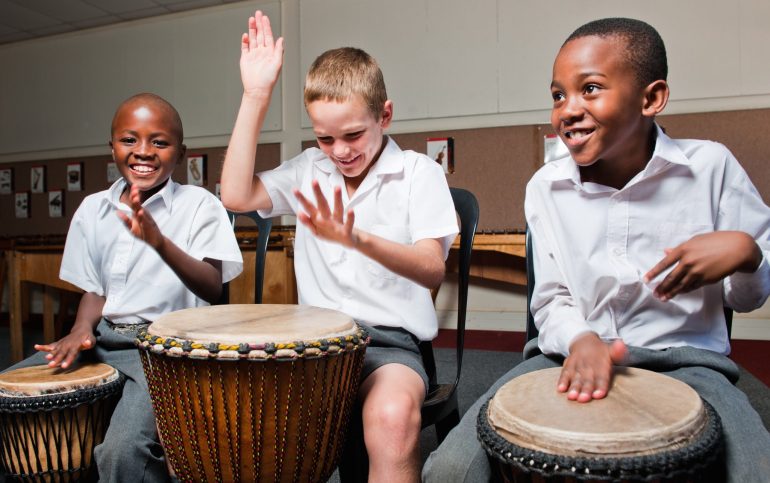 The beat of a drum is the result of a series of interactions between its constituent parts. The vibration of the shell and head, the air compressed when the head is struck and distorted, all these movements are reflected back, reverberating to make the sound. What’s more, the pitch, tone and projection of the sound is dependent on how each part of the drum is made and what it’s made of.

This significantly affects how drums are manufactured, because every material chosen, every hole drilled and every shape moulded plays a part in determining the final sound.

A drum with a metal shell sounds different to one made of wood, and that’s without even considering the type of metal or wood. The material of the head and how tightly it is stretched will also have an effect and can even be altered by tuning. Then there are the factors of diameter and depth. The larger and deeper the drum, the thicker and deeper the sound. In short, the materials and manufacture of the drum are vital in shaping its sound.

The sequence of steps involved in how drums are made will also differ depending on the manufacturer and drum type. For example, while this summary has the head fitted before the hardware, this is sometimes reversed, with the head only attached after shipping so as to avoid damage. This is often the case with larger drums.

How are Drums Made with Wooden Shells? 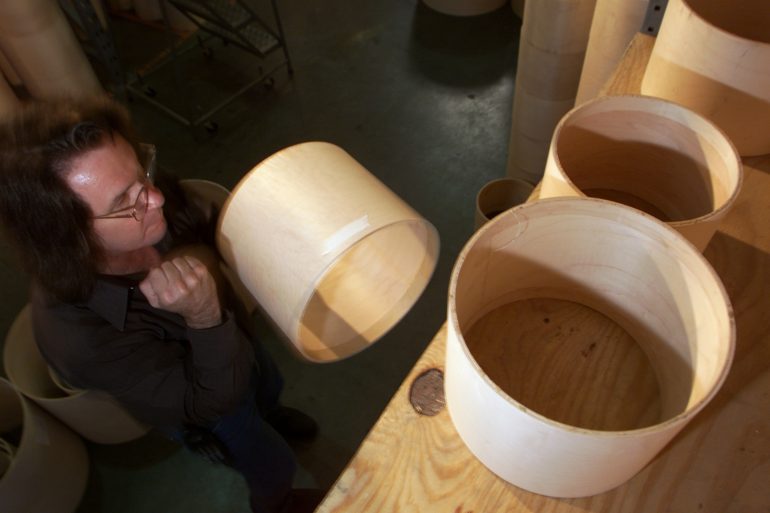 Wooden Shells. Drums being made by hand (Photo by Bryan Chan/Los Angeles Times via Getty Images)

Wooden drum shells come in many varieties, but birch, maple, beech, and poplar are amongst the most common. Whichever is selected, anywhere from 6 to 10 thin sheets or “plies” of that variety are layered and laminated together. Each sheet within the layers has the grain facing alternately horizontally and vertically, but always with the final external layer lying horizontally. A digital saw cuts each veneer down to the size required.

To bind the layers, all their sides except the external ones are covered in a powerful adhesive within a glue press. The glue sets fast, so the next steps have to be taken quickly. First the wood is rolled into a cylindrical form, then placed layer by layer into a mould and tightly pressed together. With the mould exerting pressure from the outside, an airbag is inflated in the centre of the cylinder to press from the inside, thus securing the wood in place and producing a completely rounded shape.

Next, the shell is dried. Rather than doing this in an oven, which would heat and damage the wood, a microwave is used. This will target only the water. Afterwards, the wood is cut again, this time at both ends to even it out. With the shape of the shell now complete,

How are Drums Made with Metal Shells? 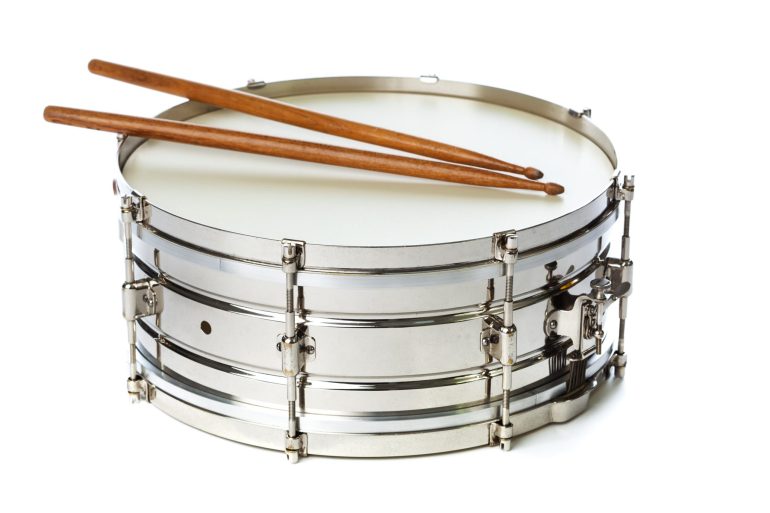 Of course, wooden drums aren’t the only way in which drums are manufactured today. Drums with metal shells are usually made by pouring molten metal into a mould, followed by either shaving off, or using lathes and drills, to create the shape. These kinds of metal drums are increasing in popularity, as are plastic types.

A painted shell involves successive rounds of sanding and painting, using various thicknesses of paint. This process is a mix of manual work and machines, such as those that spray on paint, sand and buff.

A plastic overlay may be used instead of paint for more complex designs, or to ensure durability, for example for drums mostly used outdoors. This begins by applying a protective sheet onto the shell, which is placed inside a rotating machine. As it turns, adhesive-backed sheets of polyester or polyvinyl chloride are applied one by one. Once set, the sheets will form a secure shell, but the machine exerts high pressure to ensure they stay put until dry.

Both the plastic and paints used are carefully chosen so as to minimise their effects on the drum’s sound. This means making them as thin as possible. UV paint is ideal for this and can be dried using UV light. Similarly, the plastic will be made up of three or more finely cut layers.

How are Drums Made? Adding The Head 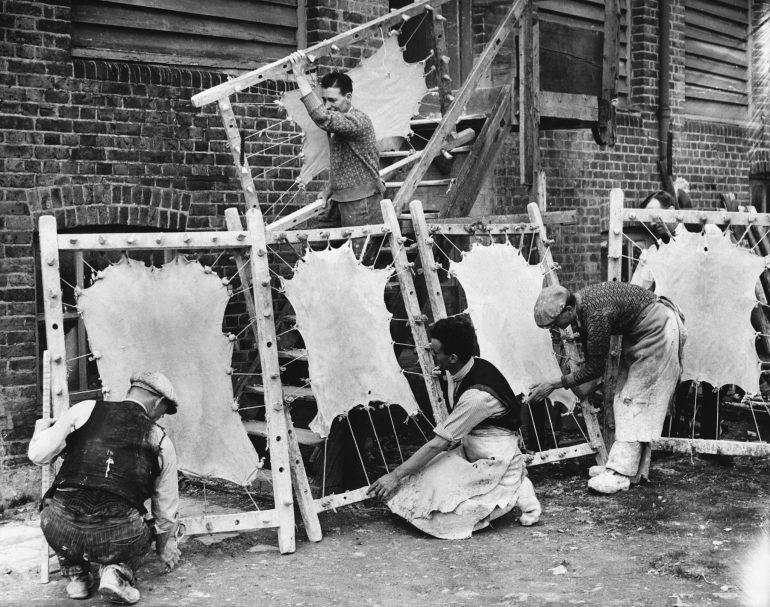 Drum heads are stretched membranes and, ideally, made of strong material with good resistance to heat, moisture and sunlight. The material of choice as late as the 1950s was animal skin. Today, it’s Mylar or plastic, particularly a polyester called polyethylene terephthalate. The chemicals used to make this fibre are heated into liquid plastic, then placed on a metal roller to cool, solidify and then to be stretched. The end result is a thin film that arrives at the drum manufacturer as a long roll. It is then cut to the shape of each drum shell and tightened over it. To secure it to the shell, its edges are heated until soft and rolled to fit.

How are Drums Made? Adding the Hardware 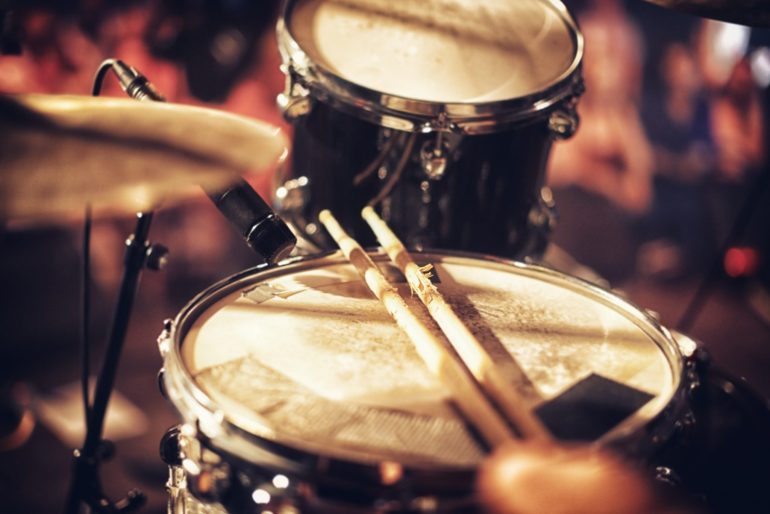 Drum kit set up on a stage (Photo: PeopleImages via Getty Images)

A drum can have anywhere between 120 and 300 pieces of hardware, mostly made of metal, wood or plastic. The term “hardware” is a broad one referring to those components that secure the drum’s parts and allow it to be adjusted. For example, once the head is in place, it is secured there with a metal ring. This hardware is called the rim and might be made of die-cast aluminium or a wood like birch or maple.

Among the first steps in attaching the hardware is drilling holes into the shell. These are made as small as possible using precision drills. Other items of hardware include the tuning screws or tension rods, which are little knobs along the rim which musicians can use to tighten or loosen the head. The tuning screws are, in turn, secured by steel bolts called lugs.

How Drum Kits are Made 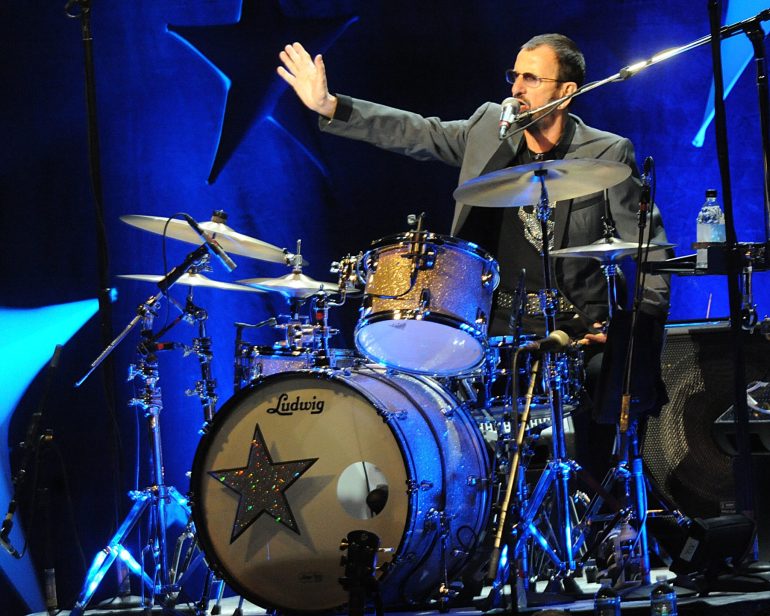 1995 -Ringo Starr at his drum kit with his all Starr Band In concert (Photo: Chris McKay via Getty Images)

One of the best known drum kit configurations includes two simple drums known as tom-toms, a floor tom, a snare drum and a bass drum plus cymbals. As for how drum kits are made, it is vital that each individual drum within the kit has the same finish. Thus, the wood has to be chosen carefully and monitored throughout the manufacturing process to avoid differences arising.

Aside from the drums, another aspect of how drum kits are made are its cymbals. Tin, copper and silver are all metals regularly used to make cymbals. Melted down and poured in a mould together with water in a process called casting. Once removed and cooled, the metal is heated again to be softened, this time to a temperature of 815 degrees Celsius inside a rotary oven. It can then be rolled, flattened and cut into shape. It’s then hammered by a digitally-monitored hydraulic cylinder to create the indents which create the cymbal’s distinct sound. Finally, tonal grooves are carved into the metal and its edges are smoothed using an edging machine.

How are Steel Drums Made? 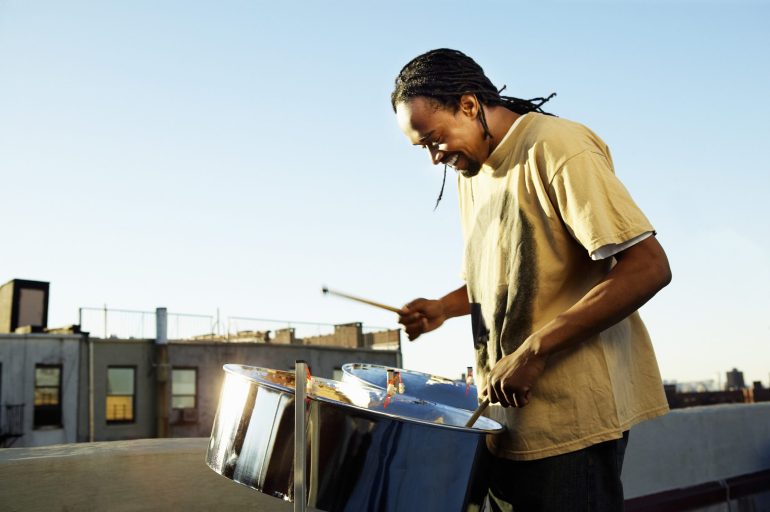 Originating from Trinidad and Tobago, steel drums are not technically drums. but are named after the empty 55 gallon oil drums traditionally used to hand produce them. So, how are steel drums made? Usually produced from 17 or 18-gauge steel, anywhere from one to six oil drums might be used for one steel drum. For example, a tenor or soprano drum might only require one oil drum, while a Quadrophonic type requires about four.

The process begins by stretching the top of the drum into a concave shape with a sledge hammer. Known as the “sinking” stage, the depth of the drum will vary depending on the type being made. It tends to range from 200mm for a tenor to 90mm for a six bass.

Next a template is used to map the notes onto the steelpan and tuning hammers are used to flatten the spaces between each one. This is followed by a process of grooving, in which a nail punch is hammered at the location of each note to create indentations. Any final aesthetic alterations are made, including more flattening and cutting off any excess parts. The drum is then rapidly heated and cooled, using first fire and then water. This is vital to prolong the effects of the next step, which is tuning.

Tuning a steelpan is an intricate feat of tapping on and behind notes with tuning hammers until the sound is just right. Once this is achieved, the final coat can be added, this performing a dual duty as both decoration and rust protection. Chrome plating, powder coating and paint are all possible finishing options. Then there’s another round of fine tuning and blending, after which, the steel drum is ready.

More recent innovations have seen steel drums made from sheets of high-grade steel, including stainless steel.

So there you have it. A beat by beat account of how drums are manufactured.