If you’ve ever stared at the colourful rows of shiny, hefty spheres at tenpin bowling and wondered, “how are bowling balls made?” then this is the article for you. Read on to learn how bowling balls are manufactured.

How is a bowling ball made? It may look like an oversized marble, but the humble bowling ball is, in fact, a feat of engineering over a century in the making. Some even argue that it is the single most important aspect of the sport.

Professional bowling balls are carefully adapted for different styles, lane conditions and frictions, all while adhering to the standards set by bodies such as the British Tenpin Bowling Association (BTBA) and the United States Bowling Congress (USBC).

But that only accounts for the modern bowling ball. There is evidence that the game has been played for over 5000 years in one form or another, including by ancient Germans and Romans. The earliest known example was found in Narmoutheos, where an Ancient Egyptian version of a bowling alley was uncovered. This game would have involved throwing stone balls down a lane.

Today’s bowling balls may be as hard as rock, but they are a far cry from rolling stones. For bowling alleys today have a range of shiny, colourful “house” balls weighing anywhere from 3 to 7 kg. Then there are the high performance pro balls, which – from a manufacturing point of view – are a whole different ball game. So, how are bowling balls made?

Before asking “how is a bowling ball made?” it’s worth looking back at how things used to be done.

Until the early 20th century, bowling balls were made of a hard wood known as lignum vitae. Things moved on in 1905, with the use of rubber, and then rubber mineralite. It was only in the 1970s that bowling balls took their next step forward, becoming polyester, followed in the eighties by a compound known as urethane.

However, it was the 1990s that saw the most significant step towards how bowling balls are manufactured today. First, was the transformation of the inside or “core” of the ball. Previously constructed of one material throughout, now bowling balls had dense blocks in their centres, altering the way they moved. As for the outer shell or “coverstock” of the ball, new options became available with the advent of resin or “reactive urethane” surfaces.

So, how do they make bowling balls now?

How Bowling Balls are Manufactured 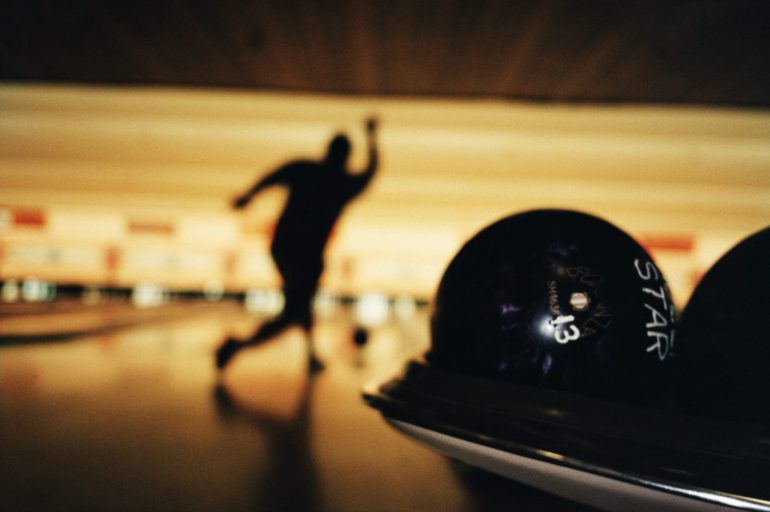 A simple answer to “how are bowling balls made?” is that a series of moulds are used into which the appropriate materials are poured and allowed to set. A bowling ball is made up of two main layers: The interior or “core” and the exterior or “coverstock”. Remember the dense blocks added to the inside of bowling balls in the nineties? That’s their core, which is then encased in the coverstock.

However, for every aspect of a bowling ball, there are numerous variations and different manufacturing methods. Balls can be customised to suit a player’s style and strength. Even then, pros might use several varieties depending on the setup and conditions.

How are Bowling Balls Made to Get the Perfect Hook? 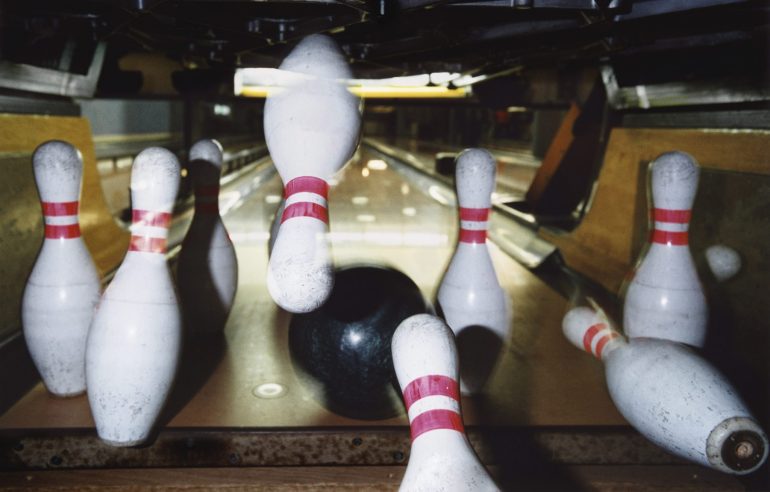 In order to achieve that all important strike, knocking down all ten pins, the trick is not to aim for a straight shot. The pins are spaced too far apart for this to work. Instead, advanced bowlers aim for a curved throw that comes at the pins from an angle. This is called the “hook”. So, while house bowling balls are perfectly balanced to travel in a straight line, professional ones are designed with an imbalance to achieve a curve, like power steering. So, how are bowling balls made to get this “perfect hook”?

How do they make Bowling Balls? The Core 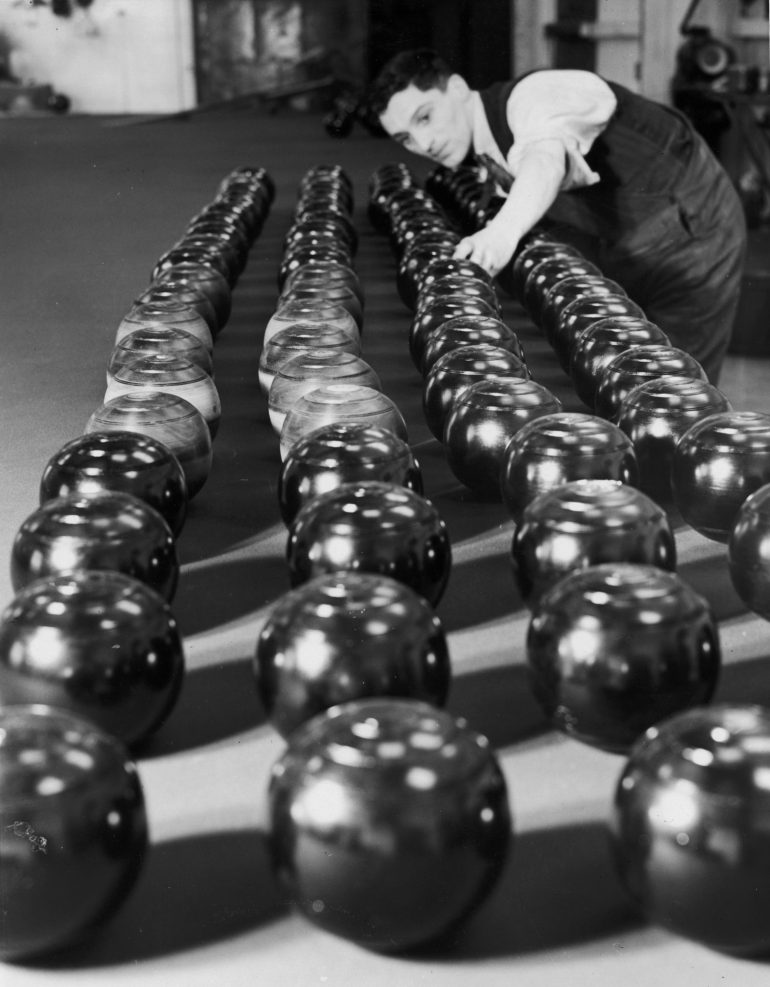 The first step in answering “how is a bowling ball made?” is creating the core. There are myriad possible core shapes available, from the more basic pancake used in house balls to the symmetrical “lightbulb” and the high-end asymmetrical types. The size, weight and location of the core vary too.

To make the core, a resin or ceramic mix is poured into a mould and left to harden. Some ceramic mixes are placed in a kiln as part of this solidifying process. Whatever the case, the hard core is eventually removed from the mould.

Some advanced bowling balls have an outer core encasing the first “inner” core. This brings the ball up to the right weight within the standardised size, without impacting on the weighting purpose of the inner core. To make this, the inner core is placed inside another mould and the material for that second layer is poured in.

If the outer core were a thick, dense material, it would completely throw off the intended balance of the ball, rendering the inner core useless. So, instead, this is usually a mix of two materials, one far lighter and less dense than the inner core – perhaps glass microbubbles – and the other far heavier and denser. Both of these materials will be made up of very small, highly durable particles. The more of the denser particles are added, the heavier the ball, with the glass particles acting as filler for the rest.

How are Bowling Balls Made? The Coverstock 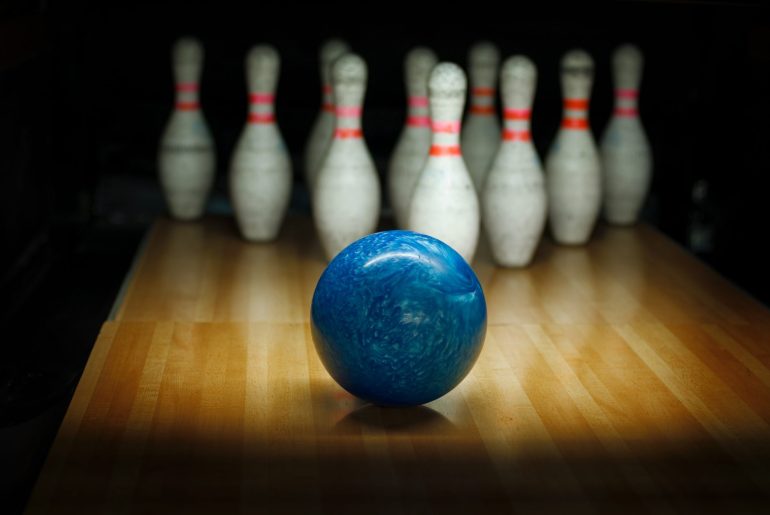 The core having been formed, it’s time for the next step in answering “how are bowling balls made?”. That’s to create the outer shell. Generally considered to have the greatest impact on ball performance, the shell can be made of polyester, urethane or reactive resin. And, while reactive resin is considered superior, all three have their uses for a professional bowler. As for house balls, these are usually polyester.

First, a small hole is drilled into the core and a long pin is inserted. This will protrude throughout the rest of the process, acting as an indicator as to the position of the core as well as holding it in place. The core is then placed inside yet another mould called the coverstock, which forms the final shape of the bowling ball, usually with the imprint of the manufacturer’s logo. The polyester, urethane or reactive resin mix is poured into the mould and baked in order to harden.

While the coverstock may look entirely solid, it actually incorporates microscopic holes which interact with the oil on the lanes. Yet another hook-maximising element.

How is a Bowling Ball Made? The Final Surface 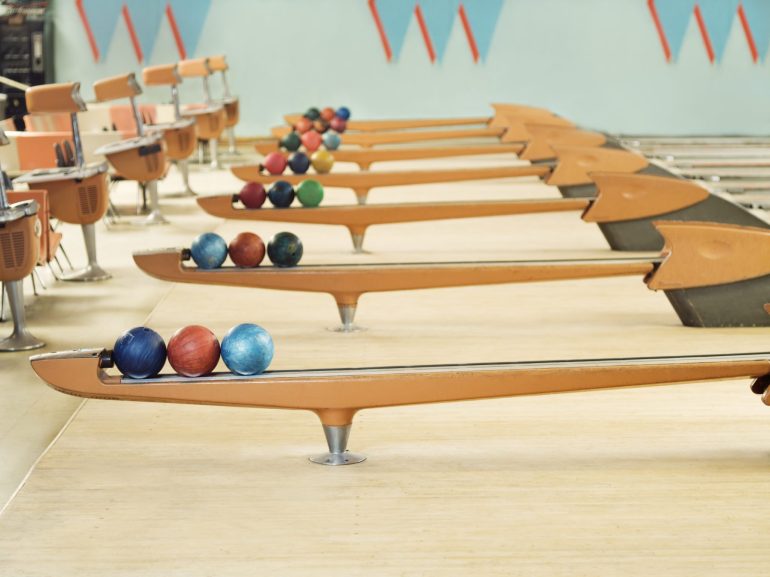 We’re almost there. We’ve almost discovered the answer to “how do they make bowling balls”. Once set, the ball is released from the mould and the long pin is extracted. This leaves behind a hole, which is temporarily sealed with a plastic peg or dowel.

Now for the finishing touches. First, a grinder or lathe is used to ensure the ball is the correct size and shape. Most bowling balls have a diameter just under 22cm, in line with the professional specifications of between 21.59 and 21.83 cm.

The next aspect of a bowling ball that is considered in the final stages of the process is its texture. This can significantly affect the performance of a ball, impacting the amount of friction and traction it achieves on the lanes. Depending on the desired result, it might be sanded or polished until it is complete.

The last step is to drill the finger holes. Remember the plastic dowel covering the pin hole? That’s like the X marking the spot where the holes should go.

And there we have it. A perfect game. We’ve uncovered the secrets of how bowling balls are manufactured. So next time you’re on the lanes and someone ponders “how are bowling balls made?” you’ll sound like a pro. Now to figure out what happens when they disappear behind the pins…