Often called the art of the ninja or by its modern moniker “ninpo”, ninjutsu encompasses the training and philosophy of the feudal spies and assassins, the shinobi. But what is ninjutsu? This guide goes undercover to learn more.

The answer to “what is ninjutsu” is inextricably linked with the history of the Shinobi-no-mono or simply shinobi. These feudal Japanese spies and assassins were said to have been masters of stealth and sabotage, skilled martial artists and accomplished swordsmen. Today, they are better known as ninjas, which is actually a rough Chinese translation of Shinobi. To quote the Igaryu Ninja Museum website, “a person who uses Ninjutsu is a ninja.”

Of course, the secretive nature of the practices of the shinobi, passed from father to son within set clans, has hindered public understanding of ninjutsu. What’s more, a mix of legend and Hollywood glamour has led to the shinobi being viewed as superhuman, able to disappear at will and even walk on water. While this might be an exaggeration, it has its roots in the incredible depth and breadth of ninjutsu, as espoused in literature that has come to light over the centuries. The main example of this is the 17th century tome, Bansenshūkai.

So, what is ninjutsu? Can you learn ninjutsu today? Keep your wits about you as we investigate. 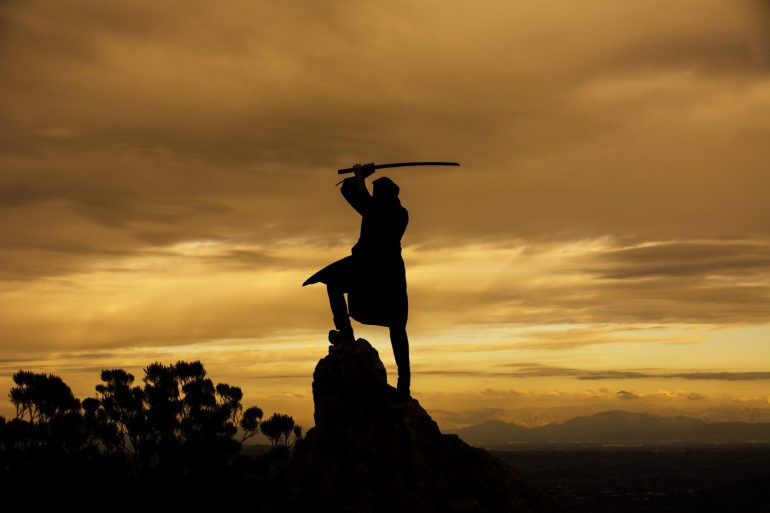 Ninja posing with katana on top of a mountain (Photo: Chasethesonphotography via Getty Images)

Ninjutsu is a Japanese discipline derived from the training and practices of Japanese ninja or “shinobi”. Most prominent in the Japanese regions of Iga and Koga from the 15th to 17th centuries, shinobi were the spies and assassins of feudal lords, their teachings passed from one generation to another within clans.

Although somewhat blurred by legend and folklore, ninjutsu training is said to have been incredibly broad in its scope, including physical, mental and social skills. This was all in accordance with the principles of pragmatism and adaptability, which are central to ninjutsu. Shinobi had to be prepared for any eventuality, capable of predicting their opponents’ moves and adapting to any scenario. As part of this, shinobi were trained in everything from unarmed combat to weapons and spying techniques to pharmaceuticals. 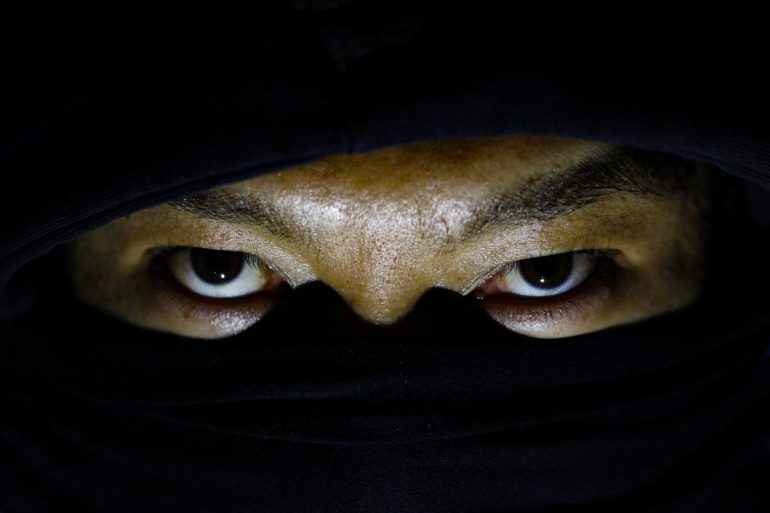 One of the reasons the question “what is ninjutsu” is so hard to answer is that even when it was widely practised, it was fragmented between clans, whose techniques and teachings were closely guarded secrets. However, literature discovered over the centuries has shed light on some of the main tenets of ninjutsu.

What is Ninjutsu’s Skills Set? 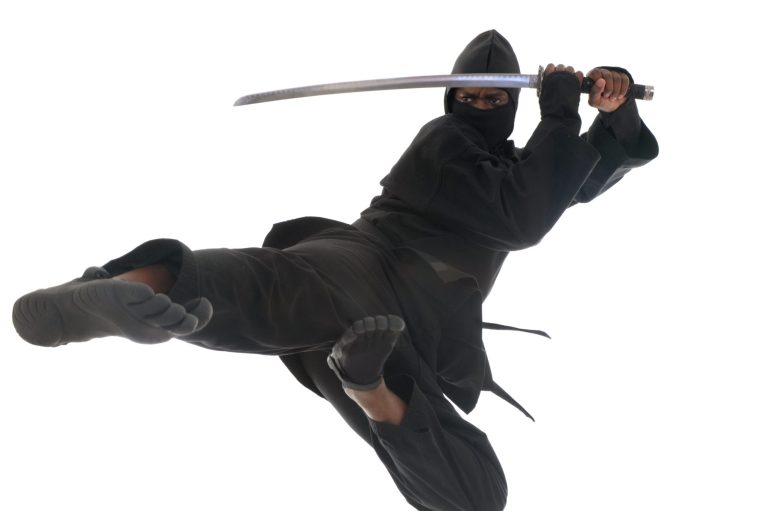 Ninja leaping in the air with a sword.(Photo: Gerville via Getty Images)

In some ways, ninjutsu was a toolbox of skills. Shinobi would operate in small groups, with each specialising in a different skill, but with an overall knowledge of all. Some would be masters of disguise, others weapons experts or even specialists in a type of weapons, whether sword or stick, spear or throwing star. Unarmed combat was a vital component of ninjutsu, as was spiritual training. What’s more, students learned practical subjects like geography, meteorology, biology and knot tying.

Let’s take a closer look at some of these skills.

Shinobi are said to have often gone undercover in unexpected roles so as to gain access to certain people and places. This could either be a low-level, inconspicuous role such as a monk or a brazen high-level position in an enemy’s power structure or guard.

In times of war, shinobi training taught them to disrupt the enemy from within, infiltrating their line to steal, spread misinformation or even set fire to it (hoka-jutsu). They might do this while enemy soldiers were asleep or by posing as one of them, known as suigetsu-jutsu.

Ninjutsu valued the art of stealth and escape by either hiding (inpo) or camouflage (tonho). Important aspects of this include controlling one’s breathing and body. Shinobi were taught to hold positions for long periods so that they might go unnoticed. Alternatively, shinobi might dazzle or surprise to enable an escape such as by throwing dust in someone’s eyes. The point was to be ready to improvise and use anything at their disposal.

Ninjutsu incorporated pharmacology and particularly the art of poisons. Shinobi are said to have used an array of poisons, from those intended to paralyse to those that were deadly. They were inventive in their poisons, including one device which used a bamboo stick to spray poisoned water at an opponent.

One cannot answer “what is ninjutsu” without addressing preparedness. Shinobu were trained in preparedness for any eventuality, whether it was knowing how to climb walls or cross rivers. They were also encouraged to be equipped with various devices, from grappling hooks or flotation aids. Their uniform would even incorporate pockets in which to carry these items.

While ninjutsu involved martial arts training, it was not in itself a martial art. Instead, it was a way of warfare. In line with its well-rounded approach, it favoured teaching a variety of unarmed combat techniques (taijutsu). Taijutsu incorporated wrestling, boxing, striking and martial arts such as naginata-do and kyudo.

When it came to unarmed combat, ninjutsu worked not on the basis of brute strength, but on leverage and using an opponent’s force against them. It also taught students to harness bodily movement, muscle alignment and posture for fluidity and rapidity of movement (kosshijutsu). Horse-riding was also part of traditional ninjutsu.

What is Ninjutsu Physical Training? 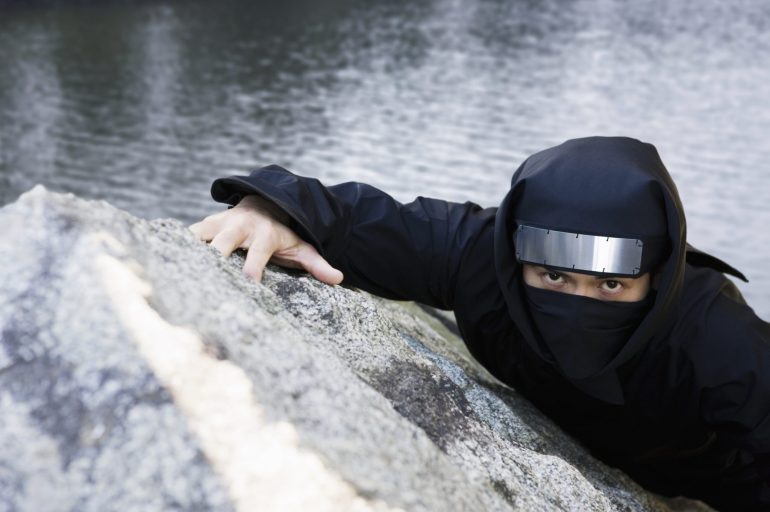 Ninjutsu had a heavy emphasis on fitness and endurance, with students encouraged to be well-rounded athletes. Training included everything from running and jumping to swimming and throwing.

What is Ninjutsu Mental Training? 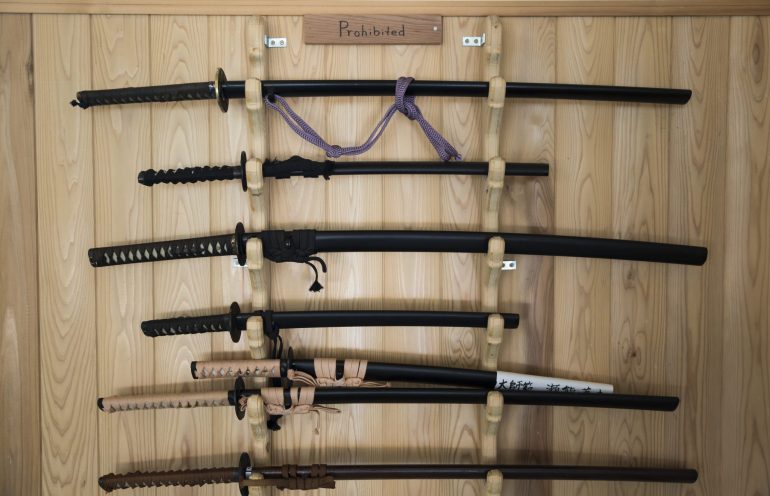 Ninjutsu valued physical and mental training equally, with great emphasis on the power of the mind to overcome obstacles. In some cases, this had religious origins, particularly from Buddhism. For example, the practice of kuji-kiri, in which shinobi would form shapes with their hands as a form of focus, included Buddhist chants.

Ninjutsu also involved an appreciation for the four elements, incorporating them into stances. It is said that shinobi could determine the intention of an opponent based on which of the earth, water, fire and wind stances that opponent took. What’s more, each stance had corresponding moves through which a shinobu could take down that opponent.

Ninjutsu tradition encouraged knowledge of a wide variety of weapons and shinobi would always have a bag of small devices or “tonki” on hand. These could be standard types such as swords and spears. But Ninjutsu is renowned for its more unusual devices. Take the four-pointed caltrops, which shinobi would drop whilst being pursued. These had multiple sharp edges to pierce the foot of their pursuer. Explosives, throwing stars and knuckle dusters are among the other devices said to have been used.

What is Ninjutsu Today? 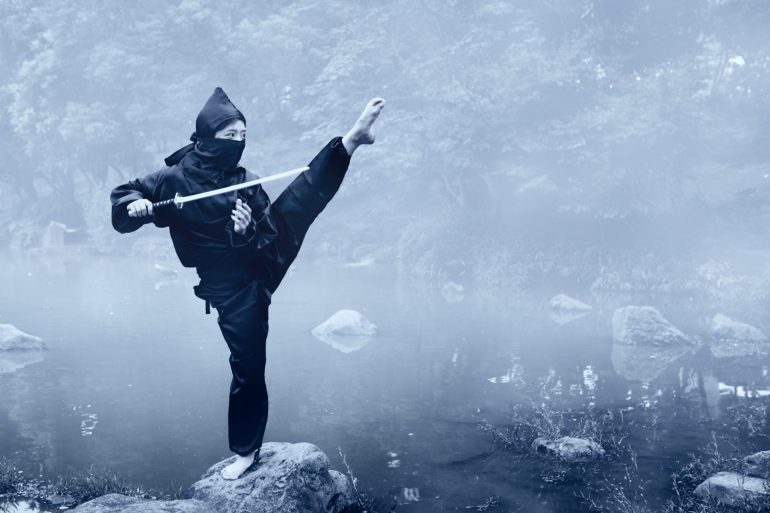 Whilst there is no specific modern school or governing body of ninjutsu per se, there is the Bujinkan. This Japanese organisation teaches under nine ryūha, or schools, together known as Bujinkan Budō Taijutsu and offers the closest approximation of ninjutsu training. According to its founder, Masaaki Hatsumi, it is a “bando” or “martial way” derived from a mix of samurai tactics and ninjutsu. However, Bujinkan members generally do not identify themselves as ninjas.

And there you have it. We have emerged from our undercover investigation with the answer to “what is ninjutsu”.