History is replete with attempts at human flight. Indeed many credit Leonardo Da Vinci with designing the first foot-launched aircraft. But it was in the 1960s that unpowered flight became a tangible reality.

A NASA engineer by the name of Francis Rogallo was researching the best ways to return spacecraft to earth. The result became known as the Rogallo wing, essentially a highly maneuverable, lightweight parachute and the first step towards the creation of the sport of hang gliding.

What is Hang Gliding? An Overview

Hang gliding is the aerial sport of piloting a lightweight aircraft called a hang glider using only air currents to stay aloft. There’s no engine or power source, only the pilot, suspended from the glider by a harness, finding thermal updrafts to keep the glider aloft and manoeuvring by shifting their body weight.

Even launching a glider is often done on foot and solely in the pilot’s control, requiring them to run down a slope, whether that’s a mountain, hill or even the side of a building. Alternatively, where there is no high land, they can be towed by a vehicle until airborne. Once in the air, hang gliders can fly for hours and cover great distances, depending on the conditions.

What is Hang Gliding? The Launch 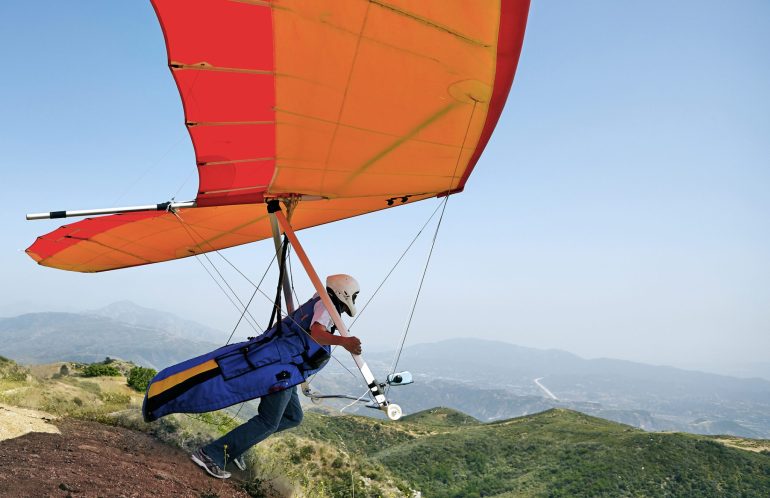 Hang gliders launch in the direction facing the wind. The traditional launch method is on foot, with the pilot running down the incline of a mountain, hill or any other slope. But there are many possible methods, including being towed by a truck or boat or even aerotowing by a plane.

What is Hang Gliding? The Flight 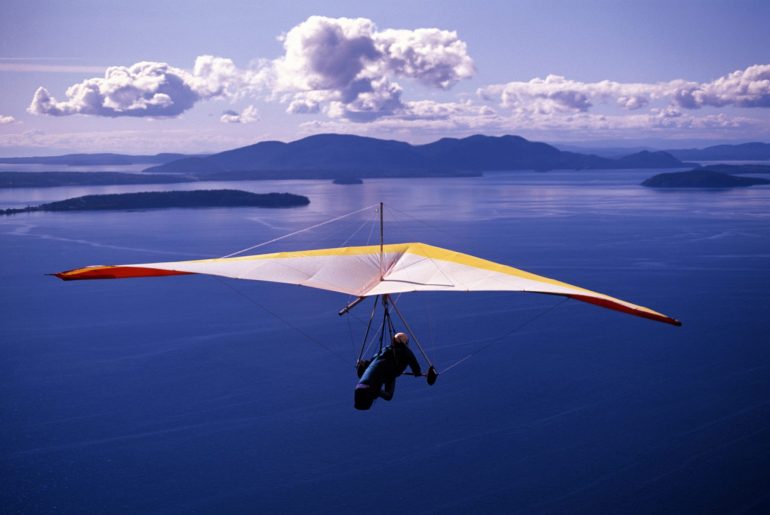 The wings of a hang glider (Photo: Steve Satushek via Getty Images)

Hang gliders are shaped as delta wing aerofoils, basically meaning aerodynamic triangular wings. They can often fly vast distances, but only when they have enough lift provided by air currents. Otherwise, they start descending at around 3 feet per second. Of course, some pilots are happy to glide down like this, but those wanting to stay aloft must seek out air that is rising faster than the glider is descending, including:

Thermals
The most common source, caused when the sun warms the earth and that heat rises up in columns.

Ridge/Slope Lift
This is air that is directed upwards from the face of a cliff, mountain or other high natural rise.

Thus a hang glider will dip and rise as the pilot finds and searches for more pockets of air. To steer, the pilot shifts their body weight using the control bar in the opposite direction to where they want to go.

What are Hang Gliders made of?

Close up of a hang glider (Photo: Steve Outram via Getty Images)

The frame of a modern hang glider is usually constructed of an aircraft-grade metal alloy, usually aluminium, or a composite material such as carbon fibre. This forms the structure of the wing, which is covered by a strong, light synthetic material like woven or laminated fibre. Cables are usually constructed of stainless steel, while other components can be plastic.

What is Hang Gliding vs Paragliding? 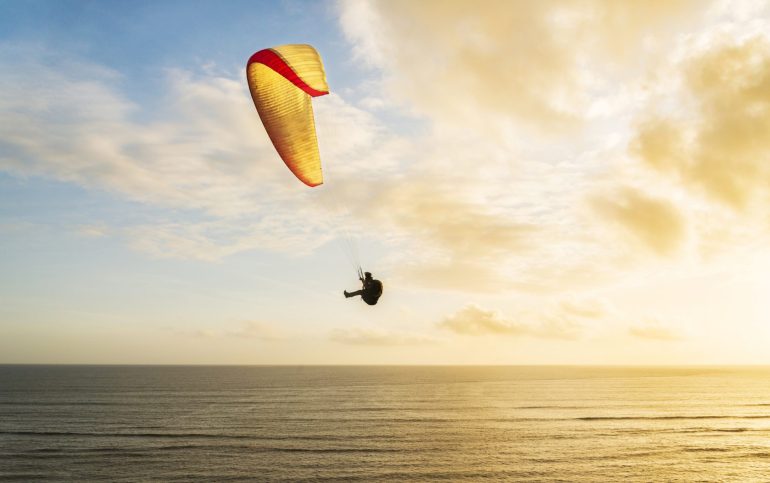 A single paraglider glides over the ocean (Photo: Andrew Lever via Getty Images)

Hang gliding is often confused with paragliding. This is understandable. After all, both are forms of non-motorised human flight using aerofoil wings. Both are foot launched and make use of air currents to stay aloft. So what is hang gliding vs paragliding in practice? What are the main differences? These tend to fall into the following categories:

Equipment
Hang gliders are a robust triangular wing with a metal frame, while paragliders utilise a wing or canopy made of fabric and airfoils, often made of Kevlar or Spectra.

Weight
Hang gliders tend to weigh over three stone, which is the upper end of paraglider weight. They are also bigger, requiring a roof rack for transport, whereas a paraglider can usually fit in a bag. Finally, there is set up time, which takes around 20 minutes for a hang glider and about half that for a paraglider.

Performance
Hang gliders are faster and have better glide performance and ratios than paragliders. They are also better for long distances and are more weather resistant.

We’re in our final descent now in our journey to discover, what is hang gliding? From the basics to the mechanics and our list of hang gliding equipment including “what are hang gliders made of”, we’ve examined the sport from all angles.