Originally a training method for rock climbing, bouldering has become a sport in its own right. But what is bouldering climbing in practice? And what is a bouldering wall? Enough cliffhangers. Let’s get learning.

They say that all you need for bouldering is a boulder. Whilst this might be a bit too simplistic, bouldering climbing is definitely seen as a more accessible sport than many of its counterparts, requiring far less equipment and training to get started.

There are no ropes, no harnesses and almost nothing except a climber and a good pair of shoes. This is, in part, because of the nature of bouldering. This free climbing sport entails scaling walls or rocks usually no higher than 20 feet. Once practised only as training for what was seen as the “proper” sport of rock climbing, bouldering has come into its own as a respected sport. 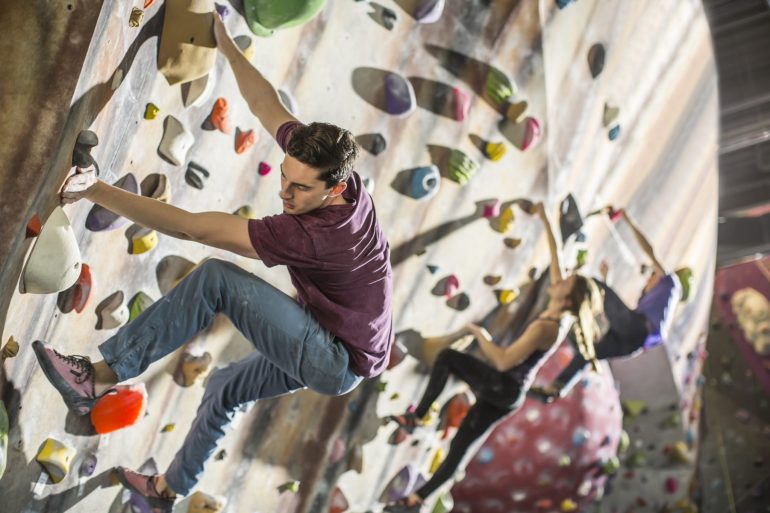 The simplest answer to “what is bouldering” is that bouldering is climbing. It can be done indoors or outside, scaling rock formations, walls or boulders. However, bouldering is not about getting as high as possible. Indeed, it is characterised by the smaller stature of its climbs, usually between 15 and 20 feet high, with specialised safety mats below. It’s this that allows it to be a type of “free climbing”, often practised – by those with appropriate training – without the aid of ropes or harnesses. So, if not reaching top peaks, what is bouldering climbing about? For this, one can take a hint from its terminology.

In bouldering, the climbing route is known as “the problem”. It is a puzzle of foot and hand holds requiring gymnastic moves and technical ability. It often involves “traversing” or travelling sideways. Climbers do aim to reach the top or “top out” whatever it is they are navigating, but also to do so in the most skillful way possible and via the most challenging routes. 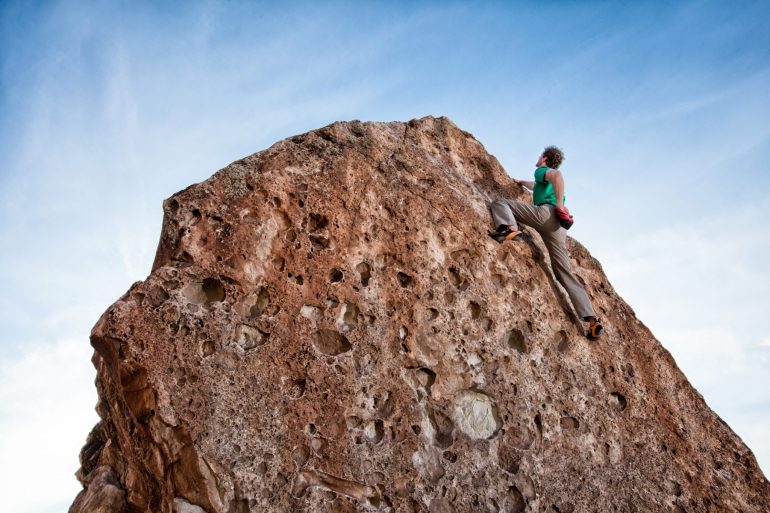 A climber reaching the peak of a boulder (Photo: Robb Reece via Getty Images)

With its safe heights and tricky moves, it’s easy to see why bouldering used to be seen – and is still used – as a training method for other climbing disciplines. In fact, it wasn’t until the mid-20th century that it began to distinguish itself as a sport in its own right. It was the 1950s when college professor Jon Gill began developing “problems”. These devised routes, also known as blocs, had existed before, but Gill upped the ante with more and more challenging ones. He also developed a grading system for them based on difficulty level and innovated a solution to help climbers keep their hands dry by rubbing them with chalk.

However, while Gill gave bouldering a significant boost on its journey, there was still a long way to climb. It wasn’t until the 80s that two more pieces of the puzzle fell into place with the introduction of bouldering mats and indoor climbing walls. The former offered bouldering climbing a literal safety net, while the latter meant the potential for year-round climbing.

In 1998, bouldering was officially recognised as a sport by the International Federation of Sports Climbing.

What is Bouldering in Rock Climbing? 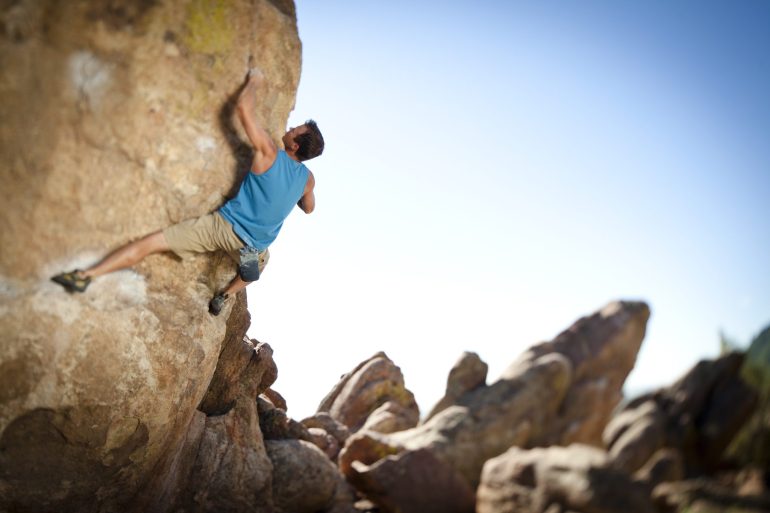 Making his way up! (Photo: Tyler Stableford via Getty Images)

There is another interpretation of the question “what is bouldering in rock climbing”. That is, what do you call the sport of bouldering when it’s done beyond the usual height? Put another way, what is bouldering climbing over a certain height? Is that then rock climbing? Well, there are two bouldering sports, which at professional levels take place without ropes at higher altitudes. Generally, any bouldering above 15 feet is considered highball bouldering. Once you get in the range of 35 to 40 feet, it’s called free soloing.

What is a Bouldering Wall? 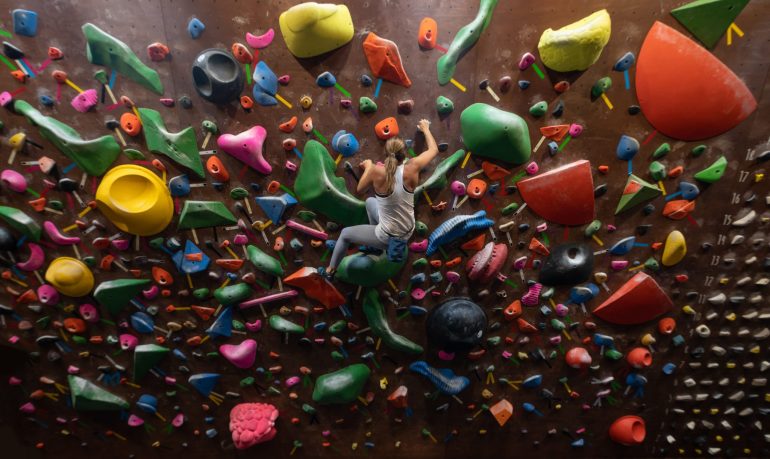 An example of an indoor Bouldering wall (Photo: Hispanolistic via Getty Images)

As stated above, bouldering can be done inside or outside. Thus the answer to “what is a bouldering wall?” will depend on which is undertaken. Outdoor bouldering walls tend to be smaller natural rock formations, often made of granite or sandstone. Famous examples include Hueco Tanks in Texas and Fontainebleau in France. Many parks now include artificial bouldering problems.

Of course, bouldering comes into its own indoors, where artificial problems can be made to maximise technical challenges. Here, the question, “what is a bouldering wall?” can be answered in any number of ways. Artificial walls can be made of polymer cement, wood, concrete or a variety of other materials. They can include plastic holds or have indents set into flat surfaces. Artificial problems’ holds are often colour coded according to difficulty.

What is a Bouldering Wall Grading? 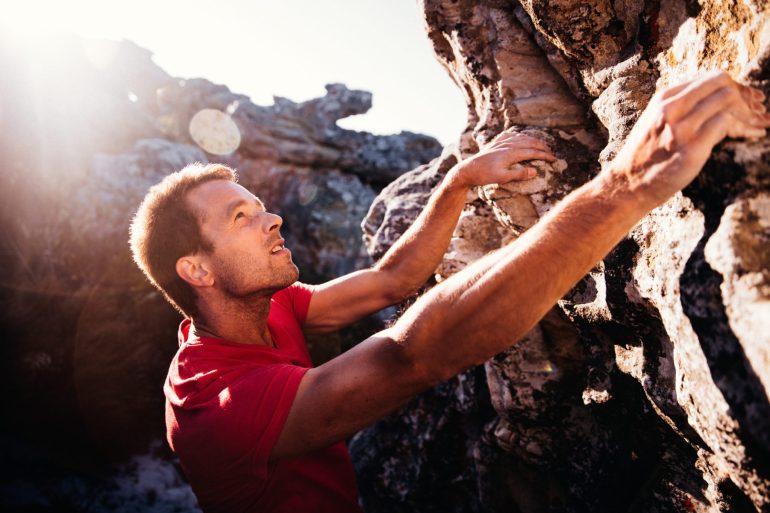 Climbing the boulder with determination (Photo: wundervisuals via Getty Images)

Bouldering problems are graded according to their difficulty. There are a number of grading systems, but the most prominent are the V-Scale and the Fontainebleau scale. The V-Scale is numerical, starting at V0 and increasing according to difficulty. In theory, V-scale ratings can go up to any number, but the highest known at the time of writing is V17. This has been awarded to two problems, Return of the Sleepwalker in Red Rocks, USA, and Burden of Dreams in Lappnor, Finland.

The Fontainebleau scale is also numerical and open ended, but starting at 4 and with the letters a, b and c for each number. For example, V0, V6 and V17 problems on the V-scale correspond with 4, 7A and 9A on Fontainebleau.

The V-scale and Fontainebleau scale are sometimes respectively known as the Hueco system and Font Scale.