How Liquorice is Made

Liquorice (or licorice in the USA) is one of the most popular sweets in the world. Its earliest uses were as a pharmaceutical lozenge for coughs, congestion and sore throats. From such beginnings to today’s Liquorice Allsorts, perhaps the most famous bag of sweets in the world, we have been eating it for thousands of years. But have you ever wondered how liquorice is made? Read on to find out about the manufacturing process of liquorice.

Liquorice Torpedoes, Sherbert Fountains, Black Jacks, Liquorice Wheels, Pontefract Cakes and of course Liquorice Allsorts… We’ve been eating – and loving – liquorice for quite some time, but do you have any idea how liquorice is produced?

In fact it comes from the root of a flowering plant in the pea family called Glycyrrhiza glabra. So how do tree roots turn into the famous black sweets? Here, we’ll explain how liquorice is manufactured. But first, a journey through the rich history of liquorice.

A Short History of Liquorice

Liquorice in one form or another has been with us for thousands of years. In fact it plays a starring role in the lives of some of history’s most famous men. Among the gold, precious stones and priceless treasures, liquorice was found in the tomb of the most famous Egyptian pharaoh of all – King Tutenkhamun.

Legendary warrior Alexander the Great and Roman emperor Julius Caesar both spoke about the benefits of eating liquorice and it is said that Napoleon Bonaparte ate so much his teeth turned black!

Fourth century manuscripts talked up the medicinal benefits of liquorice including as a cure for eye disease and hair loss but it wasn’t until the thirteenth century that liquorice root extract was used for bronchial issues such as congestion, sore throats and coughs. Entrepreneurial merchants selling liquorice may have also combined it with honey to sell as sweets and in the latter part of the Middle Ages, liquorice sweets were widely available. If you want to know how licorice is made, we’ll be right with you.

Sweet liquorice as we know it today was invented in The Netherlands in the 1700s and today it is eaten – and drunk – in all sorts of ways. The Dutch favour a salty version mixed with ammonium chloride known as zoute drop or with extra salt the dubbelzoute drop; the Italians enjoy unsweetened pieces of pure liquorice extract and the Spanish chew the washed roots as a mouth freshener.

How Liquorice is Produced 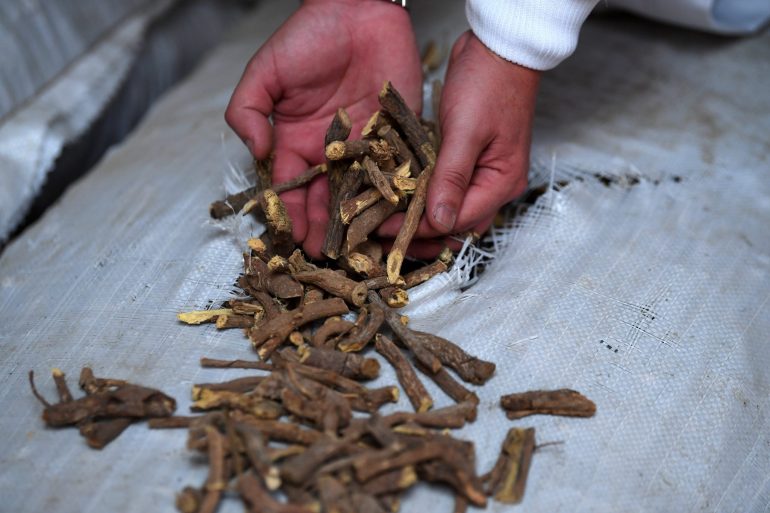 The roots of the Glycyrrhiza glabra plant (Photo: JEAN-PIERRE CLATOT via Getty Images)

The process of how liquorice is made begins with the core ingredient, the roots of the Glycyrrhiza glabra plant. As the initial step, these roots are first harvested and then taken to the processing plant. When they arrive they’re full of moisture, which can dilute the flavour of the finished product. They’re left to dry naturally in the sun for anywhere up to ten months, at which point only around 10% of the moisture content is left.

However it’s inside the factory where the magic really happens. Let’s go indoors to discover how liquorice is manufactured. Once in the factory, the dried roots are put through a shredder which reduces them to a pulp and makes it much easier to extract the rich, dense flavour.

To extract the unique flavour of pure liquorice, the pulped roots are packed into a huge sealed vat and steamed to a temperature of around 150°C for up to four hours.

This process separates the liquid extract from the roots. There’s still detritus left over from the steaming process such as small pieces of bark, dirt and root. The entire mixture is therefore fed into a tank, where it’s left for 3-4 hours for the unwanted solids to sink to the bottom. What we’re left with is pure liquorice extract in liquid form.

This is how liquorice is manufactured but there’s still a way to go before it ends up on the shelves of your local sweet shop.

To get the maximum flavour from the extract, it’s then boiled down and continuously stirred for about three hours with the volume reduced by around 75%. When the liquorice reaches the consistency of thick sticky mud, the mixture is cooled in containers and then cut into manageable blocks, ready for the next stage of the process of how liquorice is manufactured.

The Long Line of Lovely Liquorice

At this stage it’s still too hot to process into the finished product so it’s left to cool further, down to around 30°C.

At the correct temperature, the line of liquorice is fed through a series of rollers, scoring it into pellet-sized chunks. However there’s still too much moisture in the mixture at this stage, so it’s stored in climate-controlled storerooms for up to four days which dries it out further and makes it brittle. It’s then transferred to a vigorously vibrating conveyor belt which snaps the pieces apart, ready for the finishing touches.

There’s one more vital stage in the process of how liquorice is produced. At this stage of the production process, the small sweets are a dull dark brown. To give them a lustrous, appealing sheen, they’re steamed for four seconds. They are now ready to be packed.

Finally, the liquorice is packed into tins, sealed, boxed and shipped out all over the world. And that’s the final step in the process of how liquorice is made.