How is Vegetable Oil Made?

Whether it’s in our stir fry, our soap or our fuel tanks, vegetable oils are a part of our day to day lives. But how is vegetable oil manufactured? How do they make vegetable oil in factories versus at smaller suppliers? Read on for this and more about how vegetable oil is made.

From food and fuel to medicines and cosmetics, people have been making the most of vegetable oils from as far back as 6000 BC. And we’re still doing so. Granted, in terms of fuel, we put it in cars rather than lamps, but the principle remains the same: vegetable oils are an invaluable resource in our everyday lives.

So, what are vegetable oils? In simple terms, they’re oils extracted from fruits and seeds and are usually edible. In molecular terms, these oils are triglycerides, which is the same type of fatty acids that make up body fats in humans and other vertebrates. They differ from vegetable fats only in that fats are solid at room temperature, while oils are liquid.

One thing that has changed is how vegetable oil is made. Whilst some manufacturers still use similar extraction methods to those used in past centuries, the vast majority of oil is produced with newer technology. Indeed, advances such as refining and automated production lines only really came into play in the 20th century. These changes have significantly increased the proportion of oil obtained from vegetables, known as the yield.

How is Vegetable Oil Made 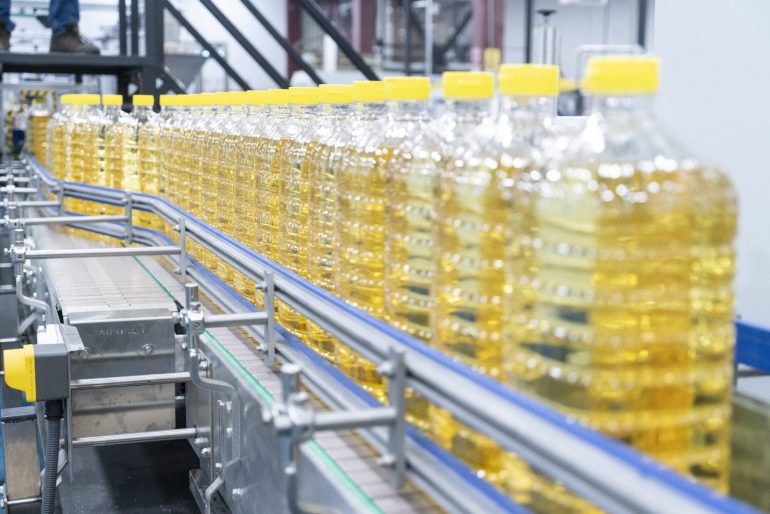 The first step in the process of how vegetable oil is made depends on the raw materials used. There is a distinction between that made from seeds – such as soybean, grape seed, and cocoa butter oil – and other parts of the fruit, including olive, palm, and rice bran oil. This can influence both the extraction method and any other processes undertaken.

Before a drop of oil is coaxed from them, the fruit or seeds must be planted, harvested and then cleaned. This removes any extraneous materials such as soil. In some cases the raw materials are passed over magnets so as to remove any metal.

Some seeds might be shelled while others, such as sunflower seeds, might be pressed whole. Another possible step in the event of particularly large seeds is breaking them up into smaller parts. Yet others are ground up or crushed.

So, how is vegetable oil made in practice? It’s all about extracting it from the seeds or other plant components. There are two main extraction methods:

The oil may then undergo a variety of processes depending on its intended use and market, including refinement. It’s generally said that “classic” oils such as olive and coconut, are usually mechanically extracted while chemicals are used to extract the “newer” oils such as corn and soybean.

In terms of cost, mechanical methods are usually cheaper than chemical, but derive lower yields, leaving behind more oil in the plant.

Better known as pressing or crushing, mechanical vegetable oil extraction is done by squeezing the oil from the fruit or seeds by press or mill. There are several types, including hydraulic press and expeller press. Mechanical extraction can either be:

The vast majority of vegetable oils are made by chemical or “solvent” extraction. This begins by heating the fruit or seed and then pressing it. Therefore, the chemical route also includes mechanical extraction, although it’s a softer touch, not aiming to extract the maximum amount.

Pressing results in two products. The first is pressed oil, which we’ll catch up with soon. The second is the partly solid matter left behind containing the unextracted oil. This latter part is called the press cake, and it is this that undergoes chemical extraction. To prepare for this, the press cake is broken down or flaked and ground down to maximise the exposed surface area.

Next comes the chemical step. The ground press cake is mixed with a solvent, of which the most commonly used is hexane, a by-product of petroleum. This forms a slurry and causes the oil in the press cake to dissolve. The hexane is then distilled by heating the slurry mix to around 149 degrees centigrade, leaving only the oil behind. This can join that produced in the initial pressing stage to undergo a series of processes before they are ready.

The hexane and any remaining parts of the raw product are both collected and put to use, the first in future extraction rounds, the second possibly as animal feed.

How do they make Vegetable Oil for Supermarkets? RBD 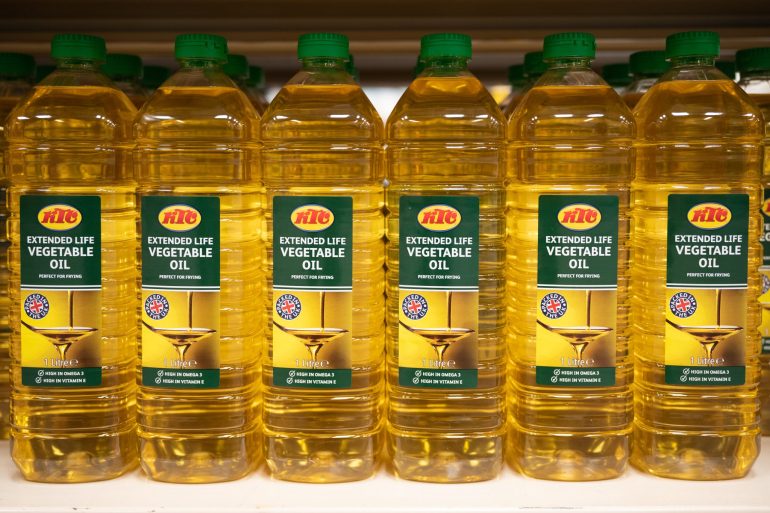 Bottles of vegetable oil on sale in a supermarket (Photo: Matthew Horwood via Getty Images)

The oil has now been extracted, but there are still several steps before it’s ready.

Most oils found on supermarket shelves have undergone some form of refining, bleaching and deodorising. Often shortened to RBD, these processes are undertaken in the name of producing a consistent, stable product with a longer shelf life than it would have naturally. However, this is usually at the cost of the flavour, smell and colour.

It may also undergo other processes. If, for example, it’s to be used at lower temperatures, such as in salad dressing, the oil can be “winterised” by rapid chilling.

How is Vegetable Oil Manufactured? Refining 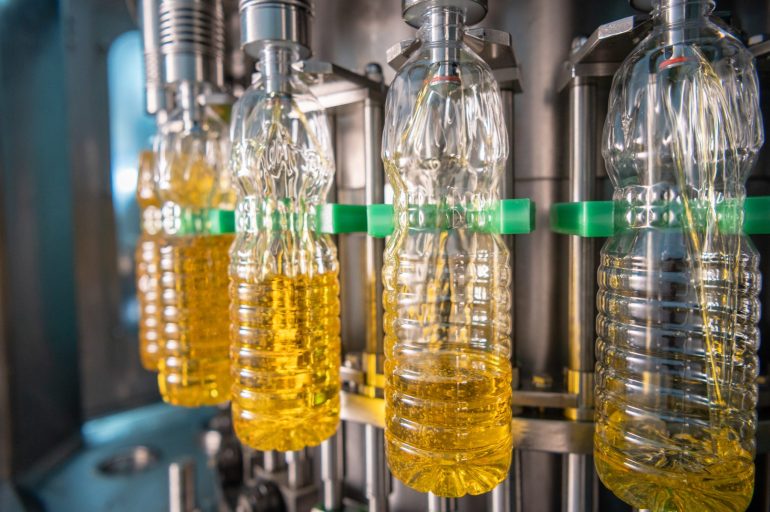 In answering “how is vegetable oil made”, the refining process aims to enhance the stability and consistency of the oil by:

The first two aims are achieved by a process known as degumming, whereby the oil is mixed with acid and/or water. Citric acid is often used. This causes any extraneous materials dissolved within the oil to detach and solidify, making them easier to remove. They are filtered out, either by sieve or centrifuge.

Next in how vegetable oil is produced comes neutralisation, in which an alkaline substance is introduced and the mix heated to approximately 85 degrees centigrade. This causes the oil to split into two products: one is edible oil, the other is soapstock. This “soapstock” contains all the free fatty acids, carbohydrates and trace metals not desired in the edible oil. As the name implies, it can be used to make soap, but also in other ways, such as in animal feed.

How Vegetable Oil is Made More Stable by Bleaching 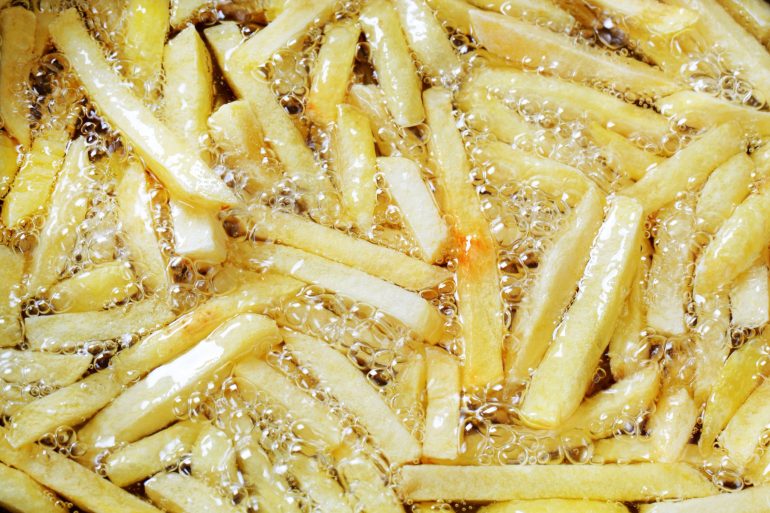 The colour compounds in cooking oil are liable to oxidise when used in frying, which can negatively affect the oil’s taste and darken it. Bleaching removes those particles and delays oxidising.

It’s done by mixing the oil with bleaching clay. When the mix is heated to around 100 degrees centigrade, the particles in question adhere to the clay. This can then be filtered out.

How is Vegetable Oil made Odourless? Deodorising 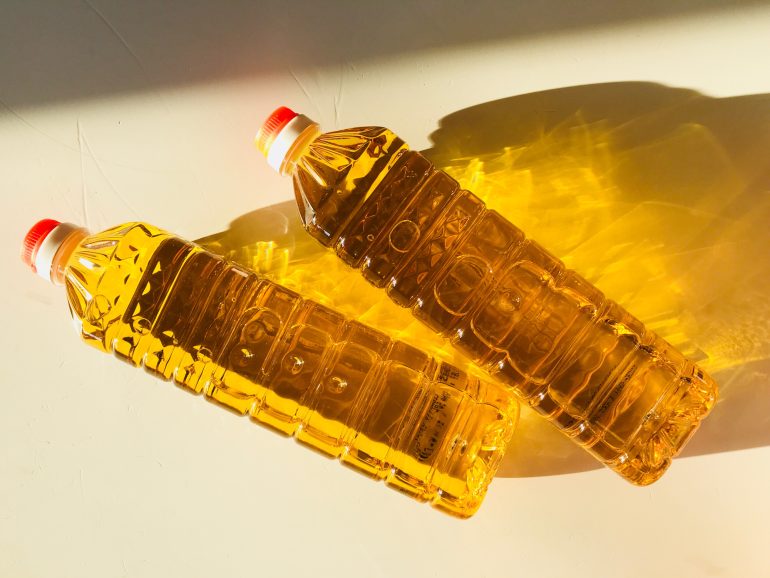 As with any natural produce, some batches of oil might smell good, others bad. To avoid any chance of the latter, the oil is rendered odourless and flavourless by deodorising. This involves steaming the oil, ridding it of all the components responsible for its smell and flavour. These might include, amongst other things, proteins, vitamins and fatty acids. Whilst this may seem counterintuitive, it is another step towards producing a consistent product.

And that’s the final step in how vegetable oil is made. It’s now ready to be bottled and shipped wherever it is to be sold.