For centuries it was one of the world’s most valuable trading commodities, the subject of wars and a focal point for human settlement. The importance of salt has not diminished, but today it is plentiful, with around 300 million metric tons produced every year. So how is salt made? And how is table salt made?

Salt is so often seen as an added extra. We might sprinkle it on fish and chips or add a pinch to our cooking. And yet, this mineral permeates every aspect of our lives. Composed mainly of sodium chloride, it is essential to life itself. Saltiness is one of the five basic human tastes. It makes up 3.5% of seawater. And, before refrigeration, salting was one of the only available methods of food preservation.

Today, only 6% of the world’s salt is used in food. It is used to de-ice roads; as an ingredient in the production of soap, paper, plastics and aluminium; and in the manufacture of clothes.

Towns and cities have been built around salt. It has been the cause of wars and the impetus for establishing vast trade routes. Since ancient times, it has permeated cultures, religions and languages, representing purity, loyalty, fidelity and permanence.

So, how is salt produced? How was it made throughout history and how is salt made in factories today? Let’s get granular.

A Short History of Salt Production 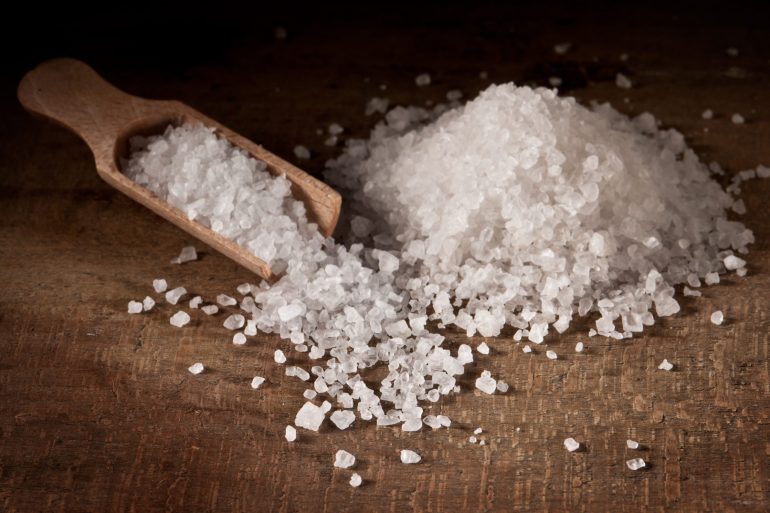 Before answering ‘how is salt produced’, it’s worth examining its role over time. Some even say the path of human history can be traced in salt.

Nobody knows when salt was first produced, but that history certainly stretches back to at least 6000 BC. There is evidence to show that salt was being produced in China around that time. Then there’s the town of Solnitsata in modern-day Bulgaria. Not only is this one of Europe’s oldest towns, but it is believed to have been built around salt production.

Salt was such a highly-prized commodity that salt trade routes were established all over the world. The most notable were between Morocco and Timbuktu in Mali and from Egypt to Greece across the Aegean and Mediterranean seas.

Some salt occurred naturally, such as when rivers would dry revealing it in the flats. The Romans used lead pans to evaporate brine, a practice used widely and replaced by iron pans in the 17th century. The way in which salt was extracted historically formed the basis of later practices and eventually led to how salt is made today. So, how is salt produced now?

How Salt is Made in Factories and Beyond 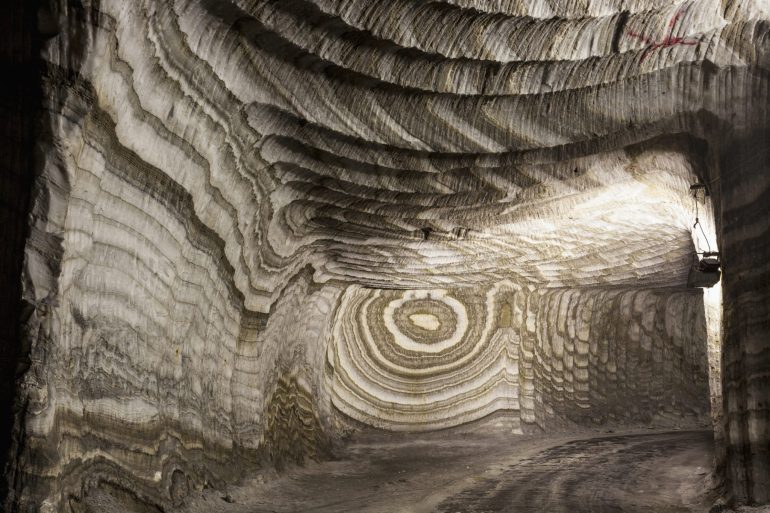 A salt mine in the village of Realmonte, Italy (Photo: Atlantide Phototravel via Getty Images)

There are three main methods by which salt is made today: (1) Solar Salt Production; (2) Mining; and (3) Vacuum Evaporation.

How is Salt made by Solar Salt Production?

In terms of how salt is made, solar salt evaporation is amongst the oldest methods still in use today. So, how is salt produced by this process? Put simply, the sun evaporates seawater or natural brine, eventually leaving behind only salt crystals. This is known as crystallisation. Solar salt evaporation can only take place in a warm climate with steady prevailing winds and very low rainfall. Thus, it’s the exclusive purview of locations such as the southern Mediterranean, Africa and Australia. So, how is salt produced by this method?

In practice, this is done using a series of interconnected, ever shallower pools. The lake or seawater is fed into the first pool, known as the concentrating pond. As the sun and wind evaporate the water, impurities suspended within it are drawn out and deposited. These are returned to the sea or lake.

With all other elements gone, the highly concentrated salty water is transferred to the second pool, called the crystallising pond. Here, the sun evaporates the last of the water, leaving behind only a salt crust.

Once all the excess water is gone, the salt is mechanically harvested. Some processing plants will wash, sift and grade the crystals, perhaps also grinding them, prior to packaging.

Mining is one of the main salt extraction methods. Rock salt, known as halite, is found deep underground, left behind from ancient seabeds. There are two salt mining practices: deep-shaft mining and solution mining. Much of the salt extracted by mining is used for industrial and other non-food purposes. However some, especially that sourced through solution mining, is used for table salt.

Shafts are sunk deep into the earth all the way down to the salt bed. There, through a mix of cutting, drilling and detonating explosive blasts into mine walls, the salt is extracted incrementally. This mining practice is known as the ‘cut and blast ’ or ‘room and pillar’ approach, the rooms being the carefully carved spaces where salt has been extracted and the pillars the supporting columns left behind. Lifted to the surface, these newly liberated salt rocks are crushed to a smaller size.

Not only is solution mining the newest form of salt extraction on this list; it is also cost effective and produces a very high yield of clean salt. While we’ll look more carefully at the question ‘how is table salt made’ in the next section, these characteristics make solution mining an excellent source of edible salt.

This process entails water being pumped under the surface of the earth, dissolving salt deposits into liquid salt brine. This is then pumped up to the surface and evaporated by vacuum (see ‘how is table salt made’ below). Where the brine has a high mineral content, it will be treated. The resulting material is virtually pure sodium chloride.

How is Table Salt Made? Vacuum Evaporation 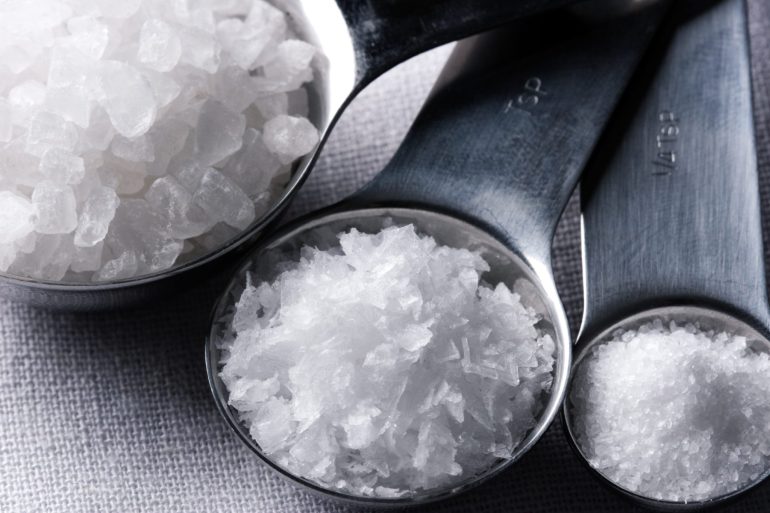 So, how is table salt made from solution-mined salt? A central aspect of this is the vacuum evaporation method. This relies on the principle that the boiling point of water reduces commensurately with the amount of pressure it’s under. And, like the lead and iron pans of before, it achieves this through artificial heat.

In vacuum evaporation, salt brine is pumped into a series of three or four vast enclosed vessels called vacuum pans. Each pan in a row will have progressively lower pressure. The brine in the first pan is brought to a boil using steam. As the pressure in the second pan is lower, the heat from the first pan is enough to make that boil too. The heat from that then boils the next pan and so on.

The salt left over is centrifuged before being dried and cooled. Then it is passed through screens to sort by size and packaged.

Explaining how Salt is Produced 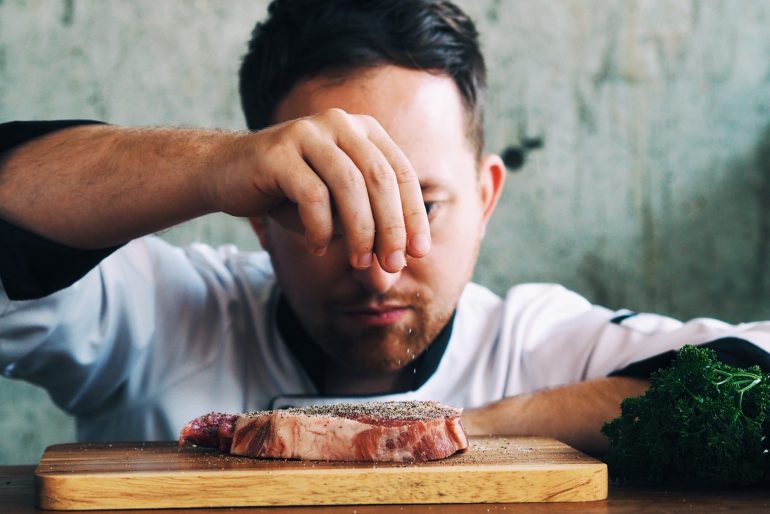 And so we’ve answered both ‘how is salt produced’ and ‘how is table salt made’, getting into the fine detail of how salt is made.