How is Sake Made?

Sake is a Japanese alcoholic drink made from rice. It's typically around 15% alcohol by volume and is produced by a process of fermentation. Sake is an important part of Japanese culture and is often served at special occasions as well as being a very popular gift, but how is sake produced? Read on to find out.

Sake is as ingrained into Japanese culture as pasta in Italy and bourbon in America. There are around 1,170 sake breweries in Japan, who between them produce around 340 million litres of the fermented rice wine a year.

Even though sake is called a rice wine, it’s brewed rather than distilled so the production process is more in line with beer than wine. We’ll delve more into that when we answer the question ‘how is sake produced’ below.

Like wine, sake is made in a variety of flavours that are differentiated by nuance and complexity. At its most basic, it’s described as dry, kara-kuchi, or sweet, ama-kuchi but there’s a very specific scale of sweetness to dryness known as nihonshudo. This ranges from -15 (very sweet) to +15 (very dry).

So, for the sake of everyone who wants to know how sake is made, here’s how.

A Short History of Sake

There’s no specific place and time when sake was invented, rather it evolved when the process of fermenting rice into alcohol arrived in Japan from China around 2,500 years ago.

The first references to sake are from the Kojiki, believed to be the first written history of Japan, in the year 712. It was around this time, known as the Nara period, that the sake we know today was created from rice, water and kōji mould.

In the three centuries that followed, sake was almost exclusively used in religious ceremonies and at court, and it was originally produced in temples and shrines.

In the 1400s, commercial brewers emerged and the business of sake production became incredibly competitive. As early as 1698, government records showed over 27,000 sake breweries. As the artisanal methods became more industrialised in the 19th century, Japan’s national drink made its way around the world.

Here’s the answer to the question ‘how is sake made in a factory?’

How is Japanese Sake Made? 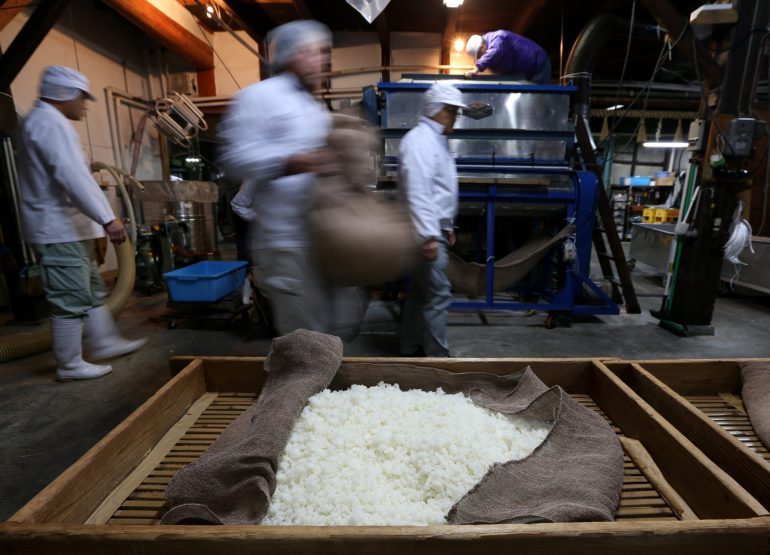 As with all manufacturers of premium food and drink, the exact recipes and formulas are considered closely-guarded secrets. However, regardless of the brand, every bottle of sake – from the everyday drink that costs a few pounds to the most expensive bottles that sell for thousands of pounds – starts with rice. There are over 80 types of sake rice in Japan, known as shuzō kōtekimai, or ‘sake-brewing suitable rice.’

The rice is usually harvested in October and at the brewery it’s passed through a machine that separates the grains from the stems. The brown rice is then very carefully milled (or in sake parlance, polished) to remove the proteins, lipids and minerals on the outside. Around 30% – 65% of the grain is removed.

Next in the process of how sake is made, the rice is washed and emptied into a porous sack where it’s left to soak in cold, filtered water. The rice is left to drain overnight and from the bags, it’s poured into a steamer.

The rice is pressure-cooked for around an hour which softens the rice but doesn’t overcook it. For perfect fermentation, the rice should have a firm exterior and a soft centre. We’re about halfway through answering the question ‘how is Japanese sake made’ but there’s a way to go before it ends up in your glass.

How is Sake Fermented? 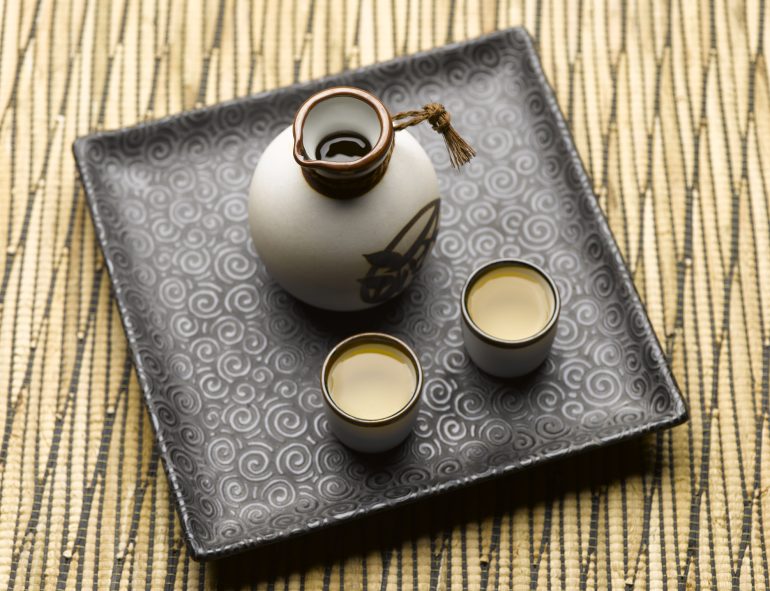 After the rice has cooled, it’s transferred to a heated room and spread out by hand onto wooden tables covered with cloth. Next comes the most important element in the entire process of how sake is produced, fermentation.

The rice is covered with mould spores, more accurately an enzyme-secreting fungus, called Kōji-kin (Aspergillus oryzae) that turns the starch in the rice into fermentable sugars.

When the spores are heated, they germinate and grow on the rice. Once the rice is at the perfect temperature, it’s bundled up in cloth to keep the heat in for anything up to two days.

Many artisanal sake makers will mix the rice every few hours by hand over the course of the two days but the bigger plants will do this by machine.

Once the sweet rice, known as kōji, is ready, the fermentation itself can begin. The rice is transferred to a fermentation tank along with water and yeast. The yeast ‘eats’ the sugars and produces alcohol. The entire process takes around three weeks.

Every day the brewmaster checks the acidity, temperature, sugar and alcohol levels. Once it’s deemed ready, the entire mix, rice and all, is packed into cloth bags which are themselves packed into a traditional Japanese press.

The screw press is weighed down with heavy steel plates and as the screw is tightened, the sake is squeezed out of the bags and poured out of a spout at the base.

The sake is left to age in refrigerated tanks for up to four months. When the brewmaster says it’s ready, the sake is bottled, labelled and ready to be shipped out. This is the final step when answering the question: ‘how is sake produced.’