How is Mayonnaise Made?

Mayonnaise is a thick, creamy sauce made primarily from eggs, oil, and vinegar. It’s commonly used as a spread on sandwiches, as a salad dressing, or as a dip for chips. Mayonnaise is also used as an ingredient in hundreds - if not thousands - of recipes. Read on to find out about the strange history of mayonnaise and we’ll answer the question on everyone’s lips - how is mayo made?

While its ingredients – eggs, oil and vinegar – have been with us for thousands of years, mayonnaise has only been present on our plates since the middle of the eighteenth century. Today, the global mayonnaise market is worth around £10 billion and it’s the world’s second-most popular condiment behind tomato ketchup.

When it comes to the question ‘how is mayonnaise produced’, the answer has barely changed since it was invented over 250 years ago, though the manufacturing processes have come on leaps and bounds. So how is mayonnaise made in factories?

A Short History of Mayonnaise 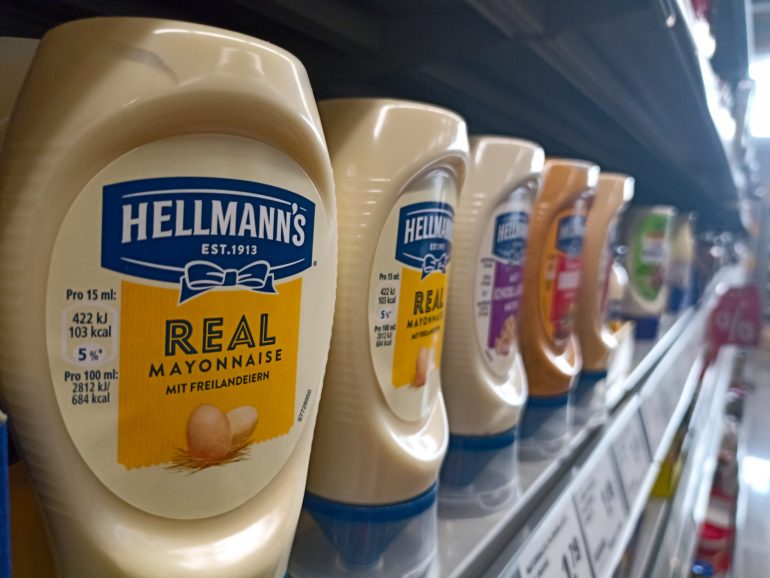 The most commonly-told story about the origins of mayonnaise takes us back to the Spanish island of Menorca in 1756. The fantastically-named French soldier Louis François Armand de Vignerot du Plessis, duc de Richelieu, defeated the British at Port Mahon and deserved a meal fit for a hero.

For his celebratory feast, the duke’s personal chef wanted to make a decadent sauce of eggs and cream however he didn’t have any cream so he used oil instead. Quite by accident he invented mayonnaise and called it ‘mahonnaise’ in honour of the victory.

Another tale of origin was that the sauce was a speciality of the town of Bayonne in southwest France. A sauce they called Bayonnaise but that seems rather farfetched.

Whatever the truth, we know for sure it wasn’t invented by Richard Hellmann, though his mayo is the world’s best-selling brand. So without further ado, here’s the answer to the question ‘how is mayonnaise made in factories.’

The Method of Making Mayonnaise

Mayonnaise is a mixture of two ingredients that can’t usually be combined. This is known as an emulsion. Emulsifying is done by very slowly adding one ingredient to the other and continually mixing them together. In this case, the egg yolk is the emulsifier which helps to mix the eggs and the oil and stops them separating.

The pasteurised eggs arrive at the factory in liquid form and they are pumped from the lorry into a refrigerated tank. At the same time, the oil – usually vegetable oil but you can use almost any oil such as soybean oil, olive oil or sunflower oil – is transferred to a holding tank.

As with all commercial food manufacturers, their specific recipes are closely-guarded secrets. It’s at this stage that technicians weigh out their mix of spices, salt and vinegar such as cider vinegar or white vinegar or even a combination of the two. Liquid flavouring is often added and this mix is combined with water to form a substance called a slurry. There are usually three tanks within this process – the egg tank, the oil tank and the slurry tank.

A computer determines the precise proportions of egg, oil and slurry to be sent to a mixing vessel, and the three ingredients are mixed and agitated at high speeds for up to ten minutes. The resulting product is mayonnaise.

One of the most important elements in the process of how mayonnaise is made is the testing. After the ingredients have been mixed and rested, technicians take samples to the quality control department to evaluate criteria including colour, consistency and taste. One such test – mixing the mayo with deionised water and a pH level indicator known as phenolphthalein – checks the acidity level. Once all the quality-control tests have been successfully passed, it’s ready to be bottled.

Whether it’s plastic bottles or glass jars, the receptacles are placed on a rotary filler and nozzles dispense the right amount of mayonnaise into each one. Another machine screws on a cap to each bottle or jar. Inside each cap is a foil seal. The bottles and jars are sent through a conveyor belt where the last machine in the process of how mayonnaise is made uses induction heat to fuse the seal to the rim of the bottle or jar. This acts to both preserve freshness and to ensure the product hasn’t been tampered with until it gets to the fridge. Finally, the labels are added and the jars and bottles are boxed up and shipped out to supermarkets up and down the country. This is the final step in the process of how mayonnaise is produced.