How is Maple Syrup Made?

Produced from the sap of two types of maple tree, maple syrup has been a staple of North Americans for many hundreds of years. Today around 70 million litres is produced by the USA and Canada every year, but when you’re pouring the wonderfully unctuous nectar over your pancakes and waffles, have you ever wondered how maple syrup is made? Read on to find out the secrets of the syrup.

Maple syrup is to the Canadians what pizza is to Italians and Champagne is to the French. It is woven in their cultural fabric and is a source of great pride, especially to the Quebecois who produce over 90% of Canada’s maple syrup, and 70% of the global output.

So if you want the answer to the question ‘how do they make maple syrup’, Quebec – the largest province in Canada by area and second by population – is the place to find it. Here, we’ll tell you the tasty tale of how maple syrup is made in a factory.

A Short History of Maple Syrup

The history of maple syrup is shrouded in mystery and legend and the journey to its widespread use has been largely lost to time.

One story goes that in the mid-sixteenth century, famous explorer Jacques Cartier and his men cut down what they believed to be a walnut tree – in fact it was a sugar maple – and the sap flowed out. They said it tasted like wine.

But how is maple syrup produced? In fact the production process involved in the manufacture of maple syrup has barely changed since the indigenous peoples in North America – possibly the Iroquois – pioneered the methods of tapping trees. In fact if you just have access to one tree you can make maple syrup but here’s how maple syrup is made in a factory.

How Maple Syrup is Made - Tap the Sap 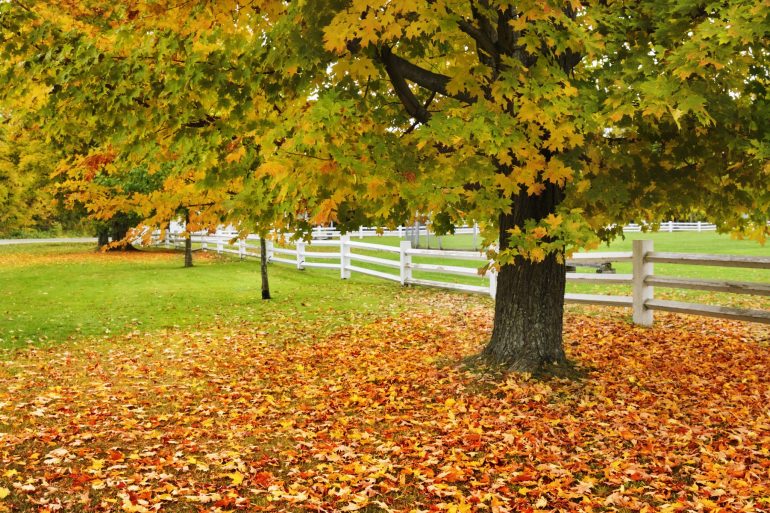 Of the 130+ species of maple tree, maple syrup comes predominantly from just two – the sugar maple and black maple – and all are grown in Canada and the northeastern states of the USA. It’s these areas which offer the perfect winter and springtime temperatures to produce what is sometimes known as ‘liquid gold’.

All trees produce sap but the sap of maple trees has a particularly high sugar content – around 2% – so it’s perfect for syrup. In early spring – usually between mid-February and mid-April – warmer days cause the sap to flow upwards from the tree roots and this is when they can be tapped.

Tapping is the first process in how maple syrup is made. A small hole is drilled and angled slightly upwards into the tree. A hollow tube – known as a spile – is inserted and the sap from the tree flows out. On a larger scale, this process sees a series of thousands of metres of plastic pipe aided by a vacuum pump extract the sap, which maintains a constant flow.

The sap fills up a number of on-site tanks which when full are transported to the sugar works, sometimes known as a sugar house, sugar shack or even sugar shanty. This is where the magic happens and this goes a long way to answer the question ‘how is maple syrup made?’

It takes approximately 40 litres of raw sap to make one litre of maple syrup – this is one key factor in why high-end maple syrup is so expensive.

How Maple Syrup is Made - From Sap to Syrup 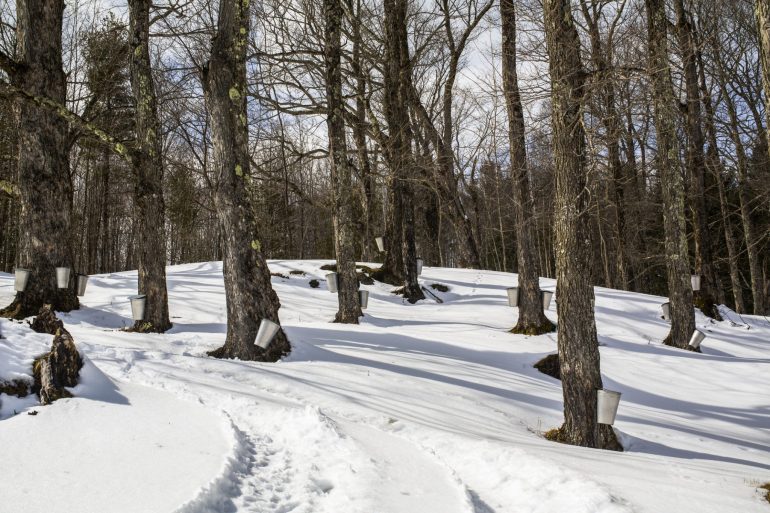 Once the huge tanks arrive at the sugar works, the sap, which is still around 98% water, is pumped through machines which removes around 80% – 90% of the water. Even after this process is complete, the liquid remains the consistency of sweetened water.

To make the wonderfully dark, sticky syrup we all know and love, the sugar, minerals and vitamins need to be highly concentrated and this happens in a huge machine called an evaporator.

The evaporator heats the sap to a very precise 103°C which boils away the rest of the water content. As the liquid concentrates, it becomes darker and more recognisable, indeed the later in the season the sap is collected, the darker the final product is.

From a scientific standpoint, maple sap turns into maple syrup when the concentration of sugar reaches 66%.

We’ve almost finished explaining ‘how do they make maple syrup’ but there are a few more vital steps to go before it ends up in a bottle and then all over your ice cream or pancakes.

How is Maple Syrup Produced - The Purity of the Pour 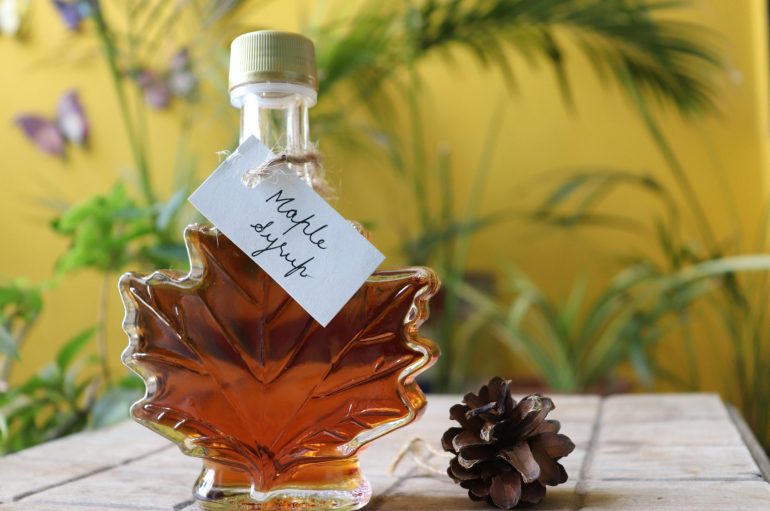 Maple syrup is as pure a product as you’re likely to find. It has just one ingredient – the sap of the maple tree, but to ensure the finished product is as pure and as clean as possible, many manufacturers add diatomaceous earth.

Diatomaceous earth is a very fine white powder made up of the fossilised remains of microalgae. It’s found in freshwater and marine systems. It’s used as a mild abrasive in toothpaste, in the manufacture of kitty litter boxes and even as a stabilising component of dynamite, but it is also used as a filtration aid.

The powder is added to the syrup and any tiny impurities adhere to the powder particles. The liquid is then run through another very fine filtration machine to remove all the diatomaceous earth and impurities and what is left is pure syrup. It’s at this point the liquid gold is bottled, sealed and packed ready to be shipped out to the supermarket shelves.