The US favours chocolate, the UK vanilla, while Japan prefers green tea. Whatever the flavour, manufacturing ice cream is big business. But what’s in our ice cream tubs? And how is ice cream made? Let’s get the scoop.

It seems it’s true. You scream, I scream, we all scream for ice cream. Over £460 million worth of it to be exact.

That was the estimated revenue from manufacturing ice cream in the UK in 2021 alone, and demand is rising. The total UK ice cream market is worth a cool £1.32 billion.

So how do they make those delicious scoops of icy joy? How is ice cream made?

The History of Ice Cream 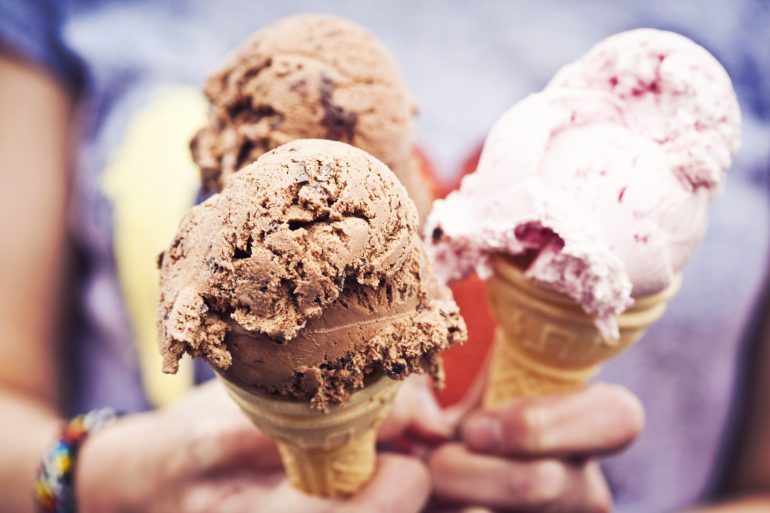 The origins of ice cream have been traced back to everyone from the Persians to the Ancient Greeks and Romans, right up to the Mongols. All of these civilisations are said to have indulged in frozen desserts of some kind, but as to the invention of ice cream, nobody really knows when or where it happened. The first hint of manufacturing ice cream on a larger scale occurred in Baltimore in 1851, but it wasn’t until the technological advances of the 20th century that mass production really took off.

How is Ice Cream Made? And What Counts as Ice Cream? 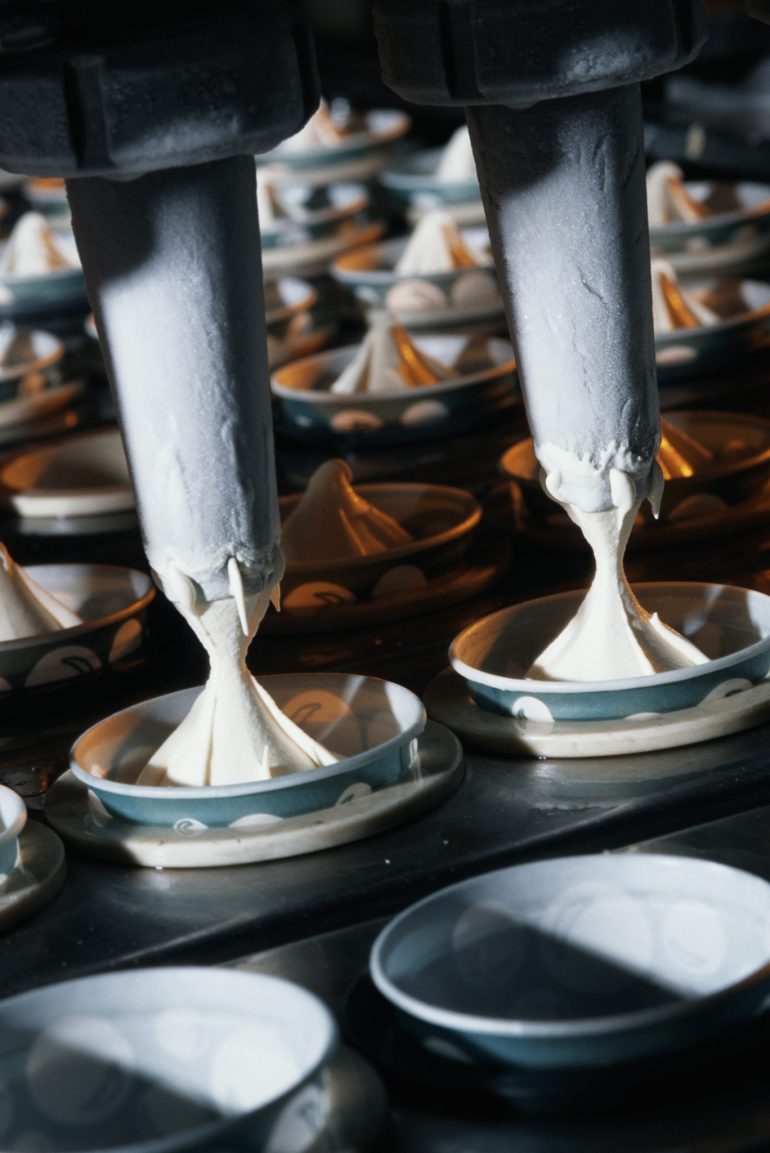 Production at an Ice cream factory (Photo: Sally A via Getty Images)

Today, there are over 1000 flavours of ice cream, from the popular vanilla, chocolate and strawberry to the more unusual candied bacon and coconut curry.

What’s more, how ice cream is made is usually a matter of law, with many countries specifying minimum proportions of ingredients it must contain to qualify as “ice cream”. For example, in the US, ice cream must have a composition of, amongst other things, greater than 10% milk fat. Higher percentages qualify as premium ice cream, while lower ones have other categories.

In the UK, fats are compulsory in ice cream but not quantified and, what’s more, it can contain no dairy whatsoever. There is a separate category for dairy ice cream, which must have 5% minimum dairy fat. A further category, milk ice, requires a minimum 2.5% of dairy fat.

But how is ice cream made on a grand scale? Let’s look at how ice cream is produced in factories. 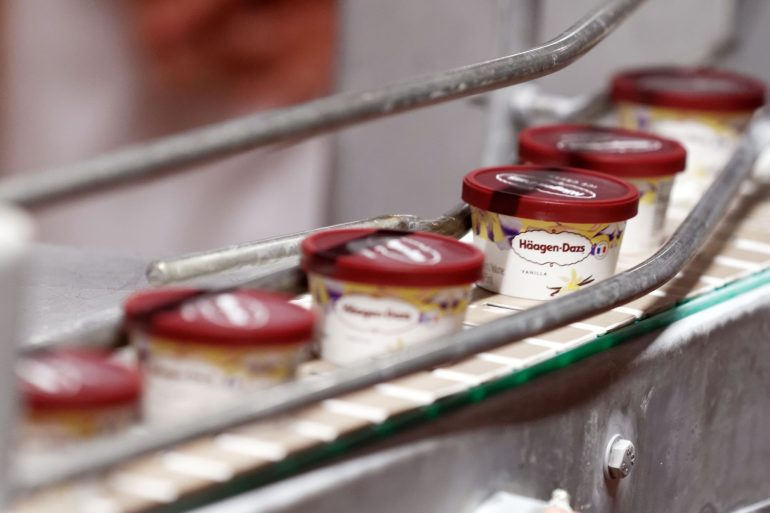 When it comes to big brands and the tubs found in supermarket freezers, manufacturing ice cream occurs in vast factories and on a massive scale. One Haagen Dazs factory in Australia is quoted as making 62 million litres of ice-cream a year.

When it comes to how ice cream is produced, think stainless steel silos and pristine machinery operating to exact timings. Think seamless production lines, mazes of pipes to transport liquid materials and pumps to perfectly fill tubs. Think random testing at each stage of the process. All overseen by workers in head to toe hazmat suits. The whole thing is very futuristic.

The Nine Stages of How Ice Cream is Produced 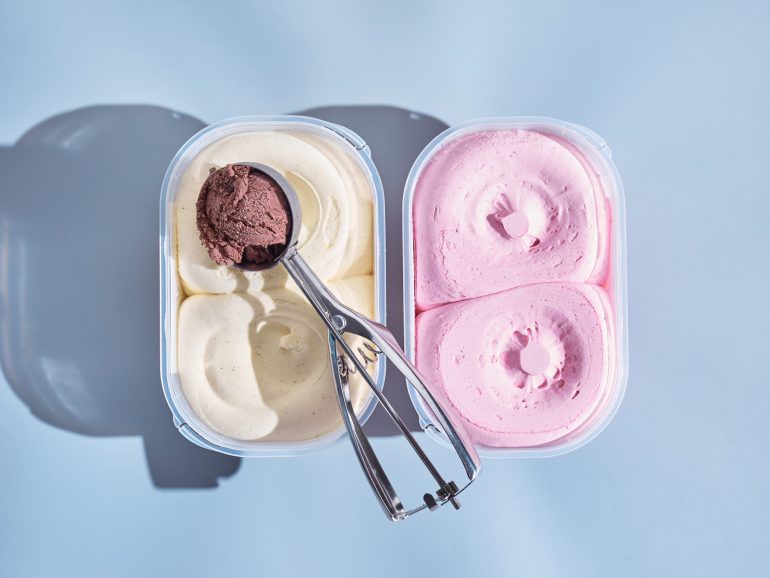 While every country and every brand will differ, there are generally nine stages to the ice cream production process:

How Ice Cream is Made: The Process 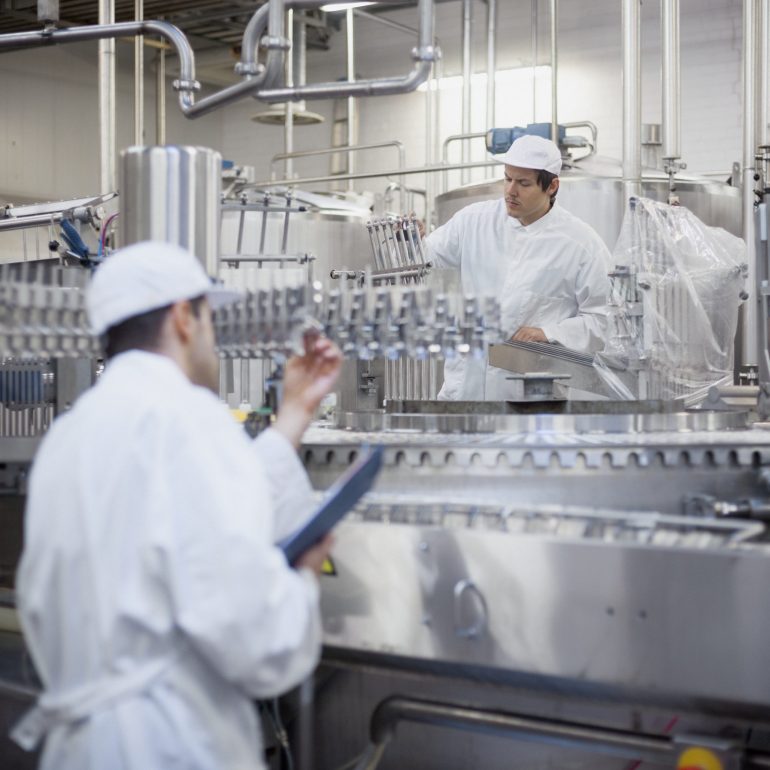 The first step in how ice cream is produced is sourcing ingredients. Most ice cream is composed of fat, milk solids non-fat (known as MSNF), sugar or another non-sugar sweetener, flavours and colours. MSNF is the naturally occurring “dry” parts of milk and is often added to ice cream as powdered milk.

Each ingredient plays a role in the taste, look and consistency of the end product. Some brands include emulsifiers to aid the churning process, and stabilisers to thicken the mix and control ice molecules.

Liquid ingredients, like milk, can arrive in temperature controlled tanker trucks, and dry ones like sugar in bags or containers. These tend to be stored in silos on arrival, with each kept in optimal conditions according to their requirements. Some might need to be refrigerated, others melted down for use.

Manufacturing Ice Cream: Mixing It Up

At this stage, all the ingredients except for flavour and colour are combined together. Machines pre-measure ingredients such as cream, milk and glucose as they are added to giant stainless steel blenders. In some factories, workers will empty dry ingredients into the vats by hand. What’s more, some types of flavours can be added at this stage, such as cocoa or nut paste. The raw materials are then heated and mixed for 6 to 8 minutes.

A vital step in how ice cream is made is pasteurising it to kill off dangerous bacteria. The process also breaks down additives and ingredients. So, pipes transfer it from the blender through a filter to the pasteurisation machine, which is a plate heat exchanger. This means that hot water heats a series of metal plates which in turn heat the mix. In the case of ice cream pasteurisation, it is heated to around 83-85°C for about 15 seconds.

The next process in how ice cream is produced is homogenising, and it’s all about texture. This process breaks down the fat globules in the mix while preventing them from separating from the other particles. This creates uniform, i.e. homogeneous, fats.
This is done by piping the hot mixture through a small opening into a high-pressure piston pump where it is subjected to intensive air pressure of up to 141kg per square centimetre and simultaneously blended again.

The mixture then continues on its journey through yet more pipes back to the pasteuriser. This time, the temperature of the plates is dropped using cold water. The plates reach around 1°C, taking the mix down to 2°C.

Note that sometimes the homogenisation and pasteurisation stages are inverted.

The mix is now rested to allow the ingredients to settle and combine. It’s pumped into tanks, where it is kept at between 2 and 5°C and gently agitated. This part of how ice cream is made is sometimes known as ‘ageing’ and takes at least four, and up to eight hours. During this time, the water and milk proteins in the mix interact, while the liquid fat crystallises. This improves both the integration of air and melt rate.

When it comes to the question “how is ice cream made?”, this is the moment we’ve all been waiting for. If it wasn’t done at the mixing phase, this is the time in manufacturing ice cream to add flavour into the mix. Not solid ingredients such as cookie dough bits or strawberry chunks. Before the ice cream is frozen, any liquid flavours are added and mixed into the ice cream in large vats.

The freezing stage has a dual purpose. As the name suggests, this is the point at which its temperature is lowered to anywhere between -3 and -9°C. This is done either through a batch process involving churning the mix in rotating barrels, or through continuous freezing using static barrels with a turning scraper along its outer surface. Continuous freezing is by far the faster method.

However, just before freezing, one last thing is added. It is the one ice cream ingredient not mentioned yet: Air. That’s right, ice cream contains air bubbles. In fact, there can be as much air in ice cream as all the other ingredients combined. It is known in the industry as “overrun”, and the amount of it affects the density of the final product. This air is pumped or whipped into the mix as it is fed into the freezing barrel. When it emerges, the ice cream is of a soft serve consistency.

From cookies and nuts to fruit and caramel, if the ice cream is to contain any chunks, bits or sauces, they are added now. Premeasured amounts are added continuously and accurately using an ingredient doser machine, which ensures every batch gets just the right portion gently pumped into it before being mixed for even distribution.

It’s finally time for ice cream and tub to unite in a highly choreographed, meticulously timed filling process. As precisely spaced tubs move along a conveyor belt, the ice cream is pumped into them from above. If decoration is to be added, they pass under another filler.

The ice cream tub is then lidded, but don’t get the spoon out quite yet. The final phase is hardening, where the tubs go through a tunnel to be frozen to a core temperature of -20°C.

Sometimes the tubs will already be in cartons at the hardening stage, but if not, this can be done afterwards, either by hand or machine. Each carton is then printed with the relevant manufacturing details before being shrink wrapped.

And that’s it. The scoop, the whole scoop and nothing but the scoop. The cold, hard facts about how ice cream is made en masse. Happy eating!