How Honey is Made

Honey is one of the world’s oldest foods. Eight thousand year-old cave paintings in Spain show hunters collecting honey from beehives, and there are fossils of honey bees dating back as much as 150 million years. But when you’re spreading honey on your toast or drizzling it into your tea, have you ever asked yourself ‘how is honey produced’ or even ‘how is honey made in factories?’ Read on to find out.

Honey is not only delicious on toast, it has a deep cultural and religious meaning and for thousands of years was believed to have magical and medicinal properties.

The ancient Egyptians were the first to document their honey-producing endeavours around 2,400 BC. It was used as a sweetener in cakes, drinks and offered as gifts to their deities. Indeed most major religions attach a significance to honey and it was – and is still – used the world over as an elixir of health.

So how is honey made step-by-step? Well, it all starts with the humble honey bee.

If you’ve ever asked ‘how is honey made by bees’ you’ll know that the answer is more complex than you might originally have thought.

The bee hierarchy is incredibly complex and sophisticated, and there are different jobs for different ranks. However, it’s the worker bees that do much of the heavy lifting. They suck nectar from flower blossoms, and when their honey stomachs are full (after around 100 flowers which results in a teaspoon of nectar), they go back to the hive.

On their return, the house bees extract the nectar from the workers, chewing it to break down the complex sugars into simple sugars called glucose and fructose. These sugars are then deposited into hexagonal cavities in the wax honeycombs. Next, to evaporate the water content, the bees will fan the cavity with their wings to dry it out, reducing it from 70% to between 15 and 20%. The honey-filled cell is then capped off with beeswax.

This answers the question ‘how is honey made by bees’ but how does it end up in jars on the world’s kitchen tables?

From Hive to Honey Pot 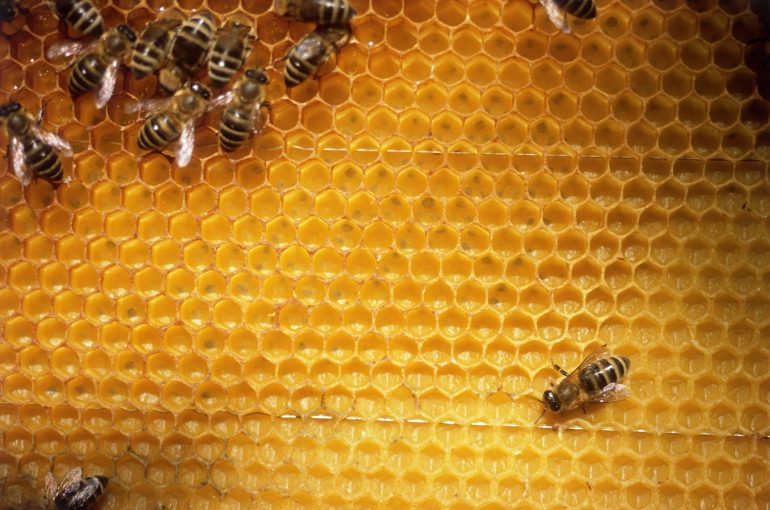 Once the bees have played their part, the beekeeper now removes the wooden frames that hold the honeycomb from each hive.

Yet they can’t just open a hive straight away and take them out. If bees get startled they will sting, so the beekeeper sprays the hive with smoke from burnt pine needles to calm the thousands of bees inside. They can then brush off the bees without agitating or stressing them too much.

Next, the frames can be removed and taken to the processing plant. This is where we can answer the question ‘how is honey made in factories’?

The frames are inserted into what’s known as an uncapping machine, which literally uncaps the individual cells by shaving the beeswax off. Incidentally, the wax itself isn’t discarded, it’s used to make candles and is a component part of products such as furniture polish and lipstick.

Once the individual frames are clean of wax, they are set into a machine called an extractor. The honey-filled frames are laid next to each other in the extractor and are spun. This starts slowly at first and gets faster. Using centrifugal force, the honey is drawn out of the honeycomb and drips out of the bottom of the extractor through two sieves. One sieve is coarse and the other is fine. Their job is to filter out any remaining wax particles and impurities.

Once the honey has been through the sieves, we are approaching the end of the answer to the question ‘how is honey made step-by-step’, though there are still a few more elements within the honey manufacturing process.

From Bee to Bottle 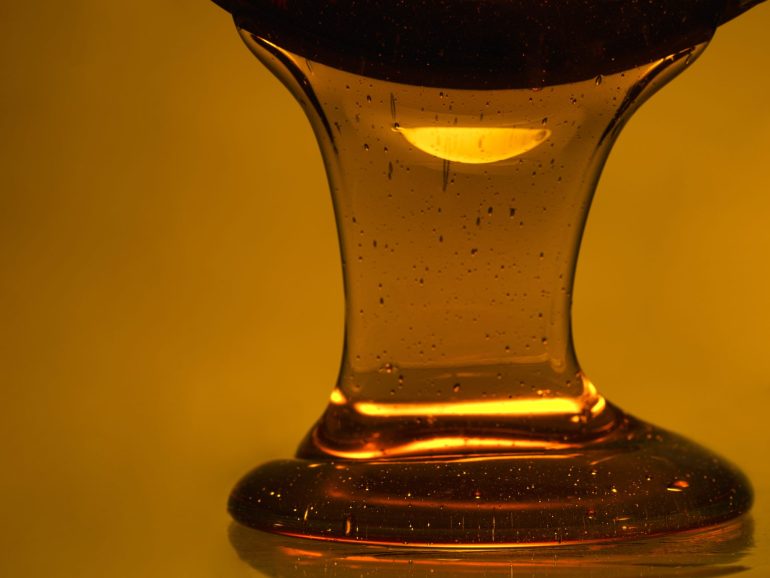 After the sieving, one of two things happens. Either the honey is pumped straight into bottles or jars, or – for the finest honey that money can buy – it goes through a further process.

For this premium product, the honey is heated in large tanks to around 50°C and as it gets hot, any crystallised honey melts and impurities such as pollen rise to the surface and are extracted. When it’s cool enough, it is bottled, packed up and shipped out.

Around a quarter of the world’s honey comes from China, with the other major producers including Ukraine, Argentina, Turkey and Iran. Globally, annual honey production is usually somewhere between 1.5 and 2 million metric tons.

So this answers the question ‘how is honey made’. It’s amazing to think it all starts with the simple honey bee, and that these tiny creatures have been doing the same job for millions of years!