How Coffee Is Made

Coffee is the world’s second most traded commodity behind oil. Every day across the globe, around two billion cups are drunk. Unlike bread and honey, which have been with us for millennia, coffee in the form we know it (and love it) today has only been drunk since the fifteenth century. But when you’re enjoying an espresso or contemplating a cappuccino, have you ever wondered how coffee is made, and have you ever asked ‘how is decaf coffee made’? Read on to find out.

Americano, lungo, mocha, flat white, latte, ristretto or just a cup of plain old joe, coffee is an integral part of our lives.

In the UK alone each year we spend an eye-watering £4 billion on coffee, and the top five coffee-exporting nations – Brazil, Vietnam, Colombia, Indonesia and Ethiopia – produce a staggering six million metric tons per year, but how is coffee manufactured? It all starts up a tree.

Freshly roasted coffee beans in a sack, ready to be ground for delicious coffee (Photo: Luca Sage via Getty Images)

No-one knows for sure how or when coffee was invented. One story goes that a ninth-century Ethiopian goat herder named Kaldi noticed his herd were very excitable and couldn’t sleep after eating certain berries off a tree. He decided to take them to his local abbott who dried and boiled them and drank the resulting liquid. This could well have been the first instance of how coffee is made. Who knows?

Another story tells of Omar, exiled from the Yemeni city of Mocha who ate coffee berries to survive. He roasted them to improve the taste but that set them solid so he boiled them and was awake for days. On returning to Mocha with this miracle drug, he was hailed as a hero and elevated to sainthood.

What we do know is that by the mid-fifteenth century coffee seeds were being roasted in Yemen. From the Middle East, coffee made its way west through the Balkan states, into Europe and across to the Americas, and east to Indonesia through the sixteenth and seventeenth centuries. Coffee houses popped up all over Europe, and they became important cultural and social centres, known as ‘penny universities’. For the price of one penny you could get a cup of coffee and discuss world events, literature or science.

In terms of the process of making coffee itself, if you could go back and ask those first baristas ‘how is coffee produced’, they would give you a similar answer to that you’d get today. In fact, there’s very little difference between then and now aside from the fact it’s slightly more expensive and there’s more choice. Later in the article we’ll answer the question ‘how is instant coffee made’ but for now we’ll find out ‘how is coffee made?’

How Coffee is Made - The Harvesting

The coffee plant – or coffea tree – is a flowering plant that produces the coffee cherry, within which is the coffee bean, which is what’s actually used to make coffee. The coffee plant itself was originally native to Africa, and is thought to have first been cultivated in Ethiopia. Today, coffee is grown in many countries around the world, including Brazil, Colombia, and India.

The first step in coffee production itself is therefore harvesting these coffee cherries. Much of the world’s coffee is still harvested manually, with seasoned experts picking the brightest and ripest cherries – which are red or yellow, keeping in mind that if they’re too dark, they’re overripe.

They then need to be dried, and there are two methods – wet and dry. The dry method involves laying the cherries out in the sun to dry for up to three weeks. When the water content is down to around 12%, the husks shrivel up and at this point they are hulled by hand for artisan coffee, or by machine for industrial-scale production.

The wet method involves a pulping machine to remove the outer skins and extract the bean before the cherries are dry, but this method doesn’t fully remove the outer layer. The beans are then left in tanks to ferment where, after a day or so, the natural enzymes digest the remaining sticky pulp. They’re taken out of the tank and washed, dried naturally, and put into a machine known as a huller. This removes the final layer and then the beans are washed again and ready to be graded.

This goes some way to answer the question ‘how is coffee manufactured’ but there’s still a number of elements within the production process before it ends up in your cup.

How Coffee is Made - The Grading 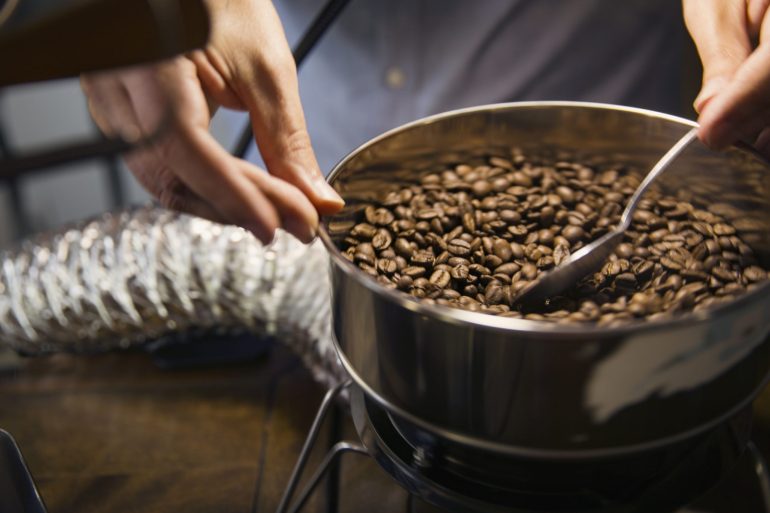 When we’re answering the question ‘how is coffee produced’, grading the beans – now green – is perhaps the most important element of the process.

Each bean is graded according to a number of different factors including size, moisture content, from where it was picked, how it was dried, consistency of colour and crucially, taste. It’s painstaking and labour-intensive, but it makes all the difference at sale time. This is when the beans are packed up into jute sacks and shipped out to the coffee companies for roasting.

How is Decaf Coffee Made? 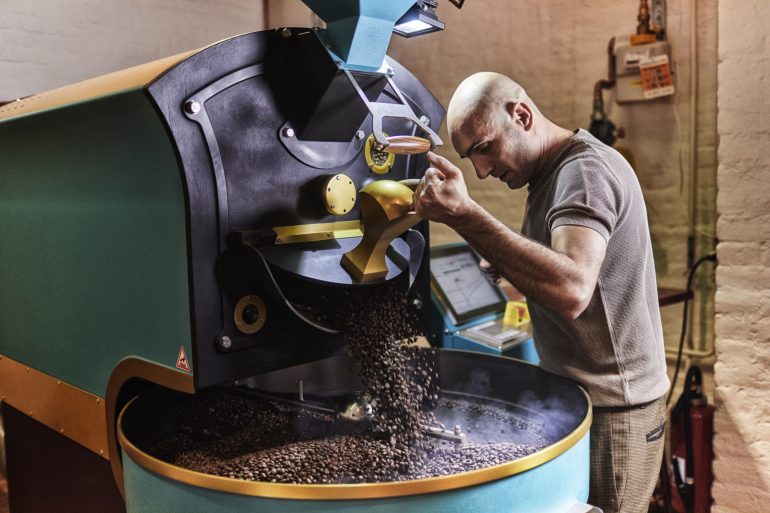 It’s at this point in the process that decaffeination happens if required, and there are two ways to do it. The first way uses water. The coffee beans are steamed at a temperature between 70-100°C bringing the caffeine to the surface which is then scraped off. The second method uses a solvent. The beans are soaked in a natural fruit ether called ethyl acetate, which also draws out the caffeine.

How Coffee is Made - The Roasting 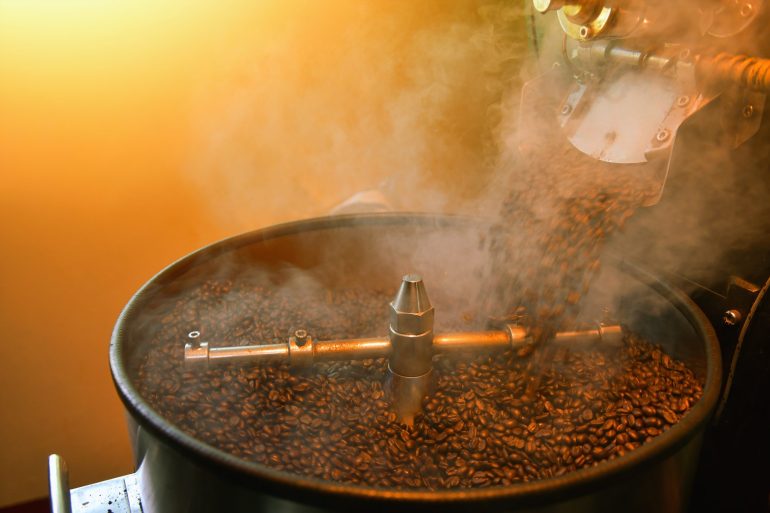 The next step is roasting the beans, and the flavour is wholly dependent on the roasting time. The beans are put into huge rotating metal ovens raising the temperature of the beans to around 220°C. This process – known as pyrolysis – releases steam, carbon dioxide and carbon monoxide from the bean, as well as a volatile oil called caffeol, the oil which gives roasted coffee beans their unique and wonderful smell.

For stronger coffees with intense flavour, the beans are roasted for longer than that used for lighter, smoother blends.

After roasting the now dark brown beans are cooled either by air or by water. This is a key step in process of coffee production and almost completes the answer to ‘how is coffee made’, but there remain a number of further varieties and steps to explore – including how instant coffee is made. 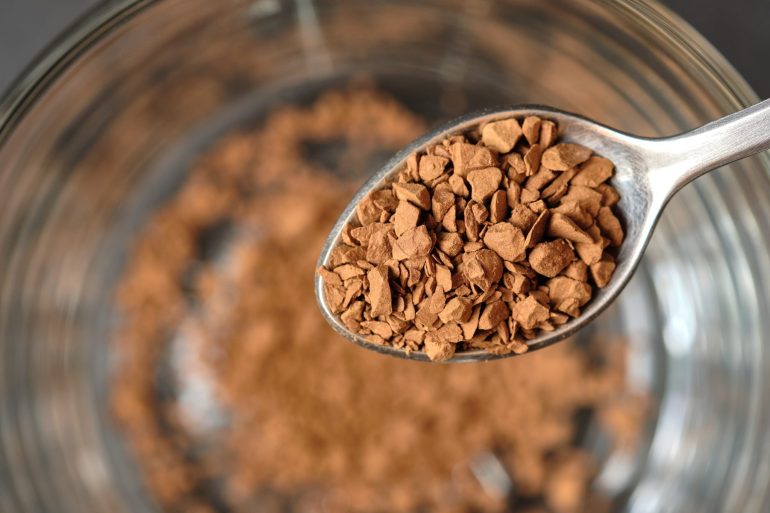 Around half the world’s coffee is turned into instant, but how is instant coffee made? The most common process is called spray drying. First, the newly-roasted beans are ground and brewed with hot water. The brewed concentrated extract is then sprayed as a fine mist through very hot air (around 250°C) which instantly evaporates the water content and dries it into a fine powder. The dehydrated powder becomes what we know as instant coffee, and is of course hydrated again as it comes into contact with hot water from your kettle.

How Coffee is Made - The Grinding & Packaging 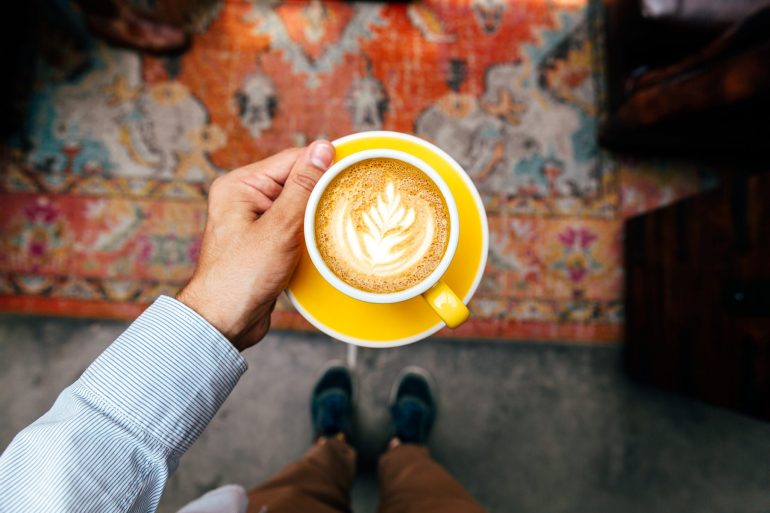 Either the coffee beans are packed for grinding at home, or they’re ground in the factory. If the latter, this process needs to be done very quickly – as exposure to the air for any length of time will diminish the flavour and condense the coffee into unappealing lumps. Once it’s been packed into foil-lined, airtight containers, the coffee is ready to be shipped out.

So this answers the question ‘how is coffee manufactured’. While you’re waiting for your half-caff, double-shot, soy milk macchiato, you now know the amazing amount of careful work, hard labour and established expertise it takes to get from coffee tree to your very own coffee cup.