Millions of purists around the world will tell you that vinyl records are the only way to listen to music. They are tactile, beautiful objects - more charismatic than a CD or music offered through the digital realm could ever be. From coloured vinyl records to records in the shape of spiders’ webs, the delivery of the music is often as creative as the artists themselves, but how are records made? Read on to find out.

Decades before the Walkman, the Discman, the iPod and music streaming apps, the humble record player was the first piece of technology that meant we could sit at home and listen to the music we wanted to hear, rather than relying on the radio to play our favourite tunes.

The earliest piece of recorded music is a digitally-converted phonautograph recording from 1860. Over the following nine decades, inventions from the likes of Thomas Edison and Alexander Graham Bell, and developments from companies such as Columbia Records, EMI, Bell Laboratories and AEG grew a huge industry. However, it was in 1948 that the world of recorded music really changed. It was never the same again.

The first 12” LP (long player) record was introduced. It had a capacity of over 20 minutes each side, and played at a speed of 33⅓ RPM (revolutions per minute). The music album was born, and it has remained almost exactly the same ever since. Here, we’ll let you know how vinyl records are manufactured. 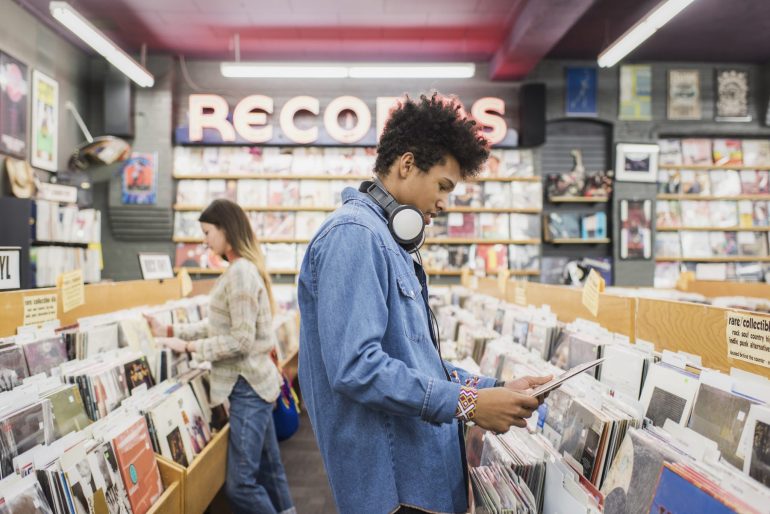 It’s very rare that consumers revert to an analogue delivery system when digital is available. However, in the realm of records, there’s a resurgence afoot. More and more modern artists are releasing their music on vinyl, and it’s garnering a whole new generation of fans, but how are vinyls made? You’re about to find out.

Once the music is made, a digital file will end up in the hands of a sound engineer who will create an aluminium master disc (often known as the Lacquer Master). This is specifically designed to be played on vinyl, and from where all copies of the record emanate from.

The aluminium master discs are sanded perfectly smooth and then covered with a nitrocellulose lacquer similar to nail varnish. Once they pass quality control, a hole is punched into the middle of the disc.

Now starts the very precise process of how vinyl records are manufactured.

The aluminium disc is then placed onto a cutting lathe and the grooves are cut with a heavy sapphire or ruby-tipped needle known as a stylus. The engineer will do a test cut and make sure everything is ship-shape before the full cut goes ahead.

At the point that the engineer is happy, the digital file is sent to the needle which converts the sound waves into vibrations which are carved into the surface of the disc. Once the grooves are cut and the gaps between the songs have been manually created, the disc is again inspected for flaws by eye and by microscope.

The aluminium master disc now gives birth to what is known as a stamper, and it does exactly what the name suggests. This is the disc used to stamp the exact grooves into the vinyl records that end up in the shops.

Stampers are not indestructible, and over time they tend to wear down. Each stamper disc lasts for around a thousand presses, so depending on how many the record company order will depend on the number of stampers made. In fact, the process of creating the stamper is more complex than the master.

The stamper is cleaned to remove any particles, sprayed with liquid silver and tin chloride and then electroplated by being drowned in nickel, which bonds to the grooves. The nickel plate is removed leaving a further disc template and it’s this one that is used to press the vinyl. At this stage the centre hole is punched.

This is where we get to the business end of how vinyl records are manufactured. Pellets of polyvinyl chloride (better known as PVC) are fed into a big hopper, heated to a temperature of around 160°C and formed into the rough shape of an ice hockey puck. This is known in the trade as a biscuit or a cake.

The biscuits are placed on a hydraulic press with the stampers and the labels (which, contrary to popular belief, are secured in place with pressure rather than adhesive) and the press comes down with a force of around 100 tons at high temperature. The excess PVC is shaved off, the vinyl cools down in a cold water bath and the records are stacked for quality control.

The machine will continually reload new biscuits until the required number of vinyl records have been pressed. When QC has been passed the discs are inserted by hand into the inner sleeve and the thicker outer sleeve, and then shrink-wrapped ready for sale.

As with the music itself, it’s clear that the process of how vinyl records are made remains an extremely precise, carefully monitored process which has brought music to millions across the globe.