Snooker is an incredibly popular game played all over the world. The world’s top players are household names and the sport has a worldwide following of hundreds of millions of fans. In fact the 2016 World Snooker Championship Final attracted a global audience of over 300 million viewers! We know that the tables have slate beds, and the cues are made of wood, but have you ever thought about how snooker balls are manufactured? It’s a lot more scientific than you might think!

Snooker, pool and billiards evolved from a version of croquet in fourteenth century France that was taken indoors and played on a table with green felt to resemble grass. However it wasn’t until 1875 that the game we know today was invented.

In the officer’s mess of the 11th Devonshire Regiment in the Indian town of Jabalpur, British Army Lieutenant Neville Francis Fitzgerald Chamberlain was playing a form of billiards called Black Pool which used fifteen reds and one black ball. He added yellow, green, brown, blue and pink balls and a brand new game was born.

Incidentally, the name of the game also comes from the military. First year cadets at the Royal Military Academy in Woolwich were called ‘snookers’ and Lieutenant Chamberlain realised that people playing his new game were ‘snookers at the game’ i.e. the first to do so. The name stuck.

Back then, the balls were most likely made from ivory – in the past they had been made from wood or clay – but ivory would yellow with age and eventually crack under pressure. Plastic was synthesised in the nineteenth century by combining nitrocellulose with alcohol and camphor, but one of the active ingredients was flammable and on rare occasions, balls made from this new material would literally explode on contact.

Today, the method of how billiard balls are made is a more complex version of the production methods involved in the early plastic bakelite. Here, you’ll find out how these seemingly everyday objects are created – this is how snooker balls are manufactured.

How are Snooker Balls Made - From Plastic to Play

With specialist sports equipment such as cricket balls or tennis rackets, you can’t ask the manufacturer specifically how snooker balls are made, because it’s a closely-guarded trade secret. Indeed, the Belgian company Saluc – who make almost 90% of the world’s pool, billiard and snooker balls – have a thirteen-part process that takes over three weeks to complete!

However, regardless of the specific manufacturer, most snooker balls are made in a similar way.
The life of a snooker ball starts out as tiny pieces of a synthesised, thermosetting plastic known as ‘phenolic resin’, a mixture of formaldehyde and phenol. Thermosetting means that once the plastic has melted and been formed into its final shape, it can’t be re-melted and used again.

Once the resin has melted, it’s poured into latex moulds and hardened under extreme pressure tolerances. Each ball is made of a different coloured resin, so the process has to be repeated eight times to make a complete set of snooker balls.

Once the balls have set solid, the moulds are removed and they are put through a lathe that smoothes out imperfections and finishes the balls to perfect spheres.

This goes some way to answer the question ‘how do they make snooker balls’, but there’s still a few more stages to go until they end up on the green baize. 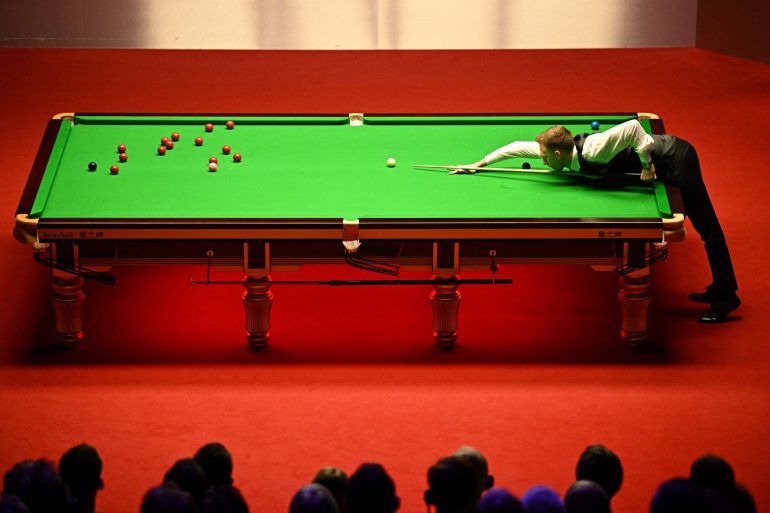 England's Judd Trump plays a shot against England's Ronnie O'Sullivan during their World Championship Snooker third session of the final match at The Crucible in Sheffield, England on May 2, 2022 (Photo: OLI SCARFF via Getty Images)

There are a number of reasons phenolic resin is used to make pool, snooker and billiard balls. First, it’s scratch and chip-resistant; and second, it has what is known in the trade as homogenous density dispersion. In everyday terms, this means that each ball has a perfect centre of gravity and has a true roll. This is absolutely vital in the process of how snooker balls are made.

After the balls have gone through the smoothing process they are weighed and measured to ensure they conform with official regulations.

According to the World Professional Billiards & Snooker Association, competition-standard balls must have a diameter of 52.5mm with a tolerance of +/- 0.05mm. While there is no officially-defined weight, the rulebook states ‘the tolerance between the heaviest ball and the lightest ball in a set should be no more than 3g’.

The process of how snooker balls are made and how billiard balls are made is almost complete, save for rigorous quality control to guarantee each ball is perfect.

They are tested by hand and by extraordinarily precise machines for weight, balance, density, roundness, colour precision and sheen. Only once the balls have passed their tests can they be packed up and shipped to customers, thus completing the process of how snooker balls are made.