How Are Cars Made?

It’s estimated that between 80 and 90 million cars are made annually worldwide. But few of us know the nitty gritty of how this is achieved. So, how are cars made?

Cars. There are around 32 million of them in the UK alone, and they make up the majority of licenced vehicles on the road.

Almost 80% of UK households have access to one. The top two most popular cars in the UK are both Fords, namely the Fiesta and the Focus. Oh, and most people prefer grey cars.

While the majority of the body is steel, many other materials go into building the modern car. Some of the most common are rubber, plastics and aluminium.

So how are all these cars reaching the road? In other words, how are cars built?

How are Cars Built? A History 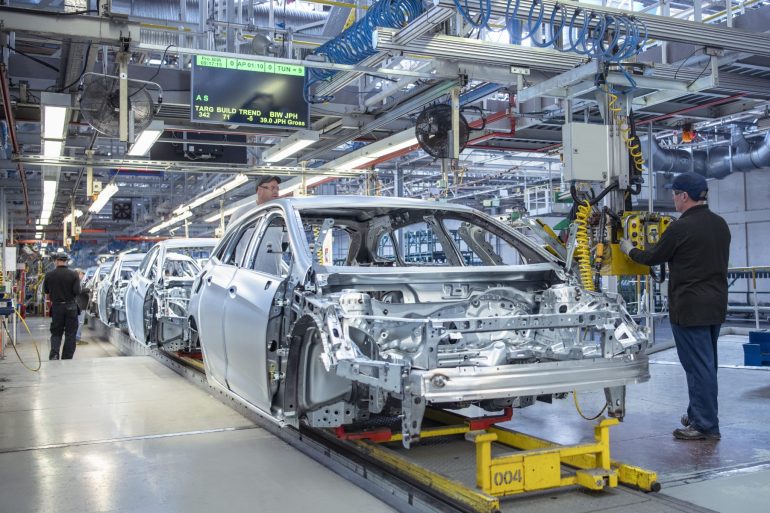 In 1887, the first iteration of what would come to be called a car was introduced onto the general market by German manufacturer, Carl Benz. Back then, car production involved placing engines in horse coaches. It was Frenchman Emile Lavassor who later redesigned them to more closely resemble what we know today, including placing the engine in the front.

How cars are manufactured has evolved significantly since then. And it was the advent of making cars on a production line, particularly the automated one, that really shifted things into high gear.

It was American Ransom Eli Olds who first applied this formally in car assembly in 1901. Then came Henry Ford and the Ford Motor Company. Ford took the production line to the next level, introducing efficiencies of both time and cost. Ford’s Model T, launched in 1908. It could be produced from start to finish in 90 minutes, in a factory with separate stations for each stage of the build. The car would move sequentially from one station to the next, but the workers would remain stationary, completing one task over and over on one car after another. It revolutionised manufacturing and was so effective that many aspects of Ford’s process are still in evidence today.

From the concept phase, it can take between three and five years for a new car model to go into production.

This includes devising computer simulated models, then making clay models, all of which are assessed by various arms of the company such as styling experts and engineers.

As well as the car itself, one key aspect of the automotive design process is designing the manufacturing tools that will produce the car itself. Many streamlining innovations have altered the design process. For example that of platform sharing, where cars are designed to use the same parts as other models.

How are Cars Produced in Modern Factories? 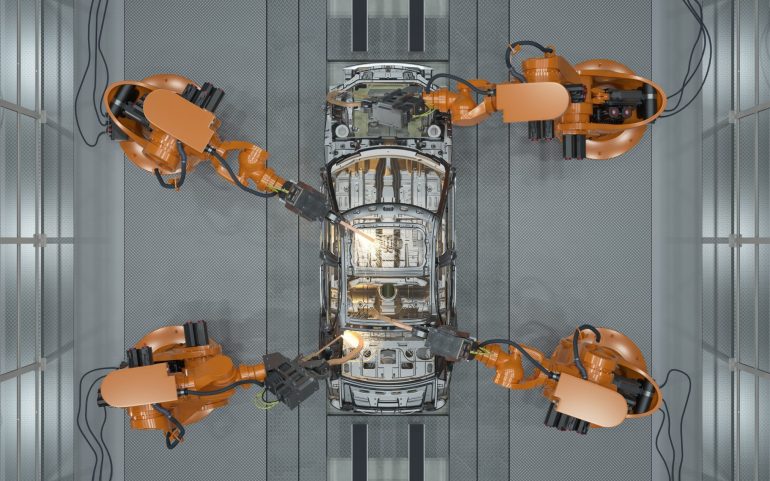 Modern car production still sees cars being assembled in a line, moving from station to station for each step of their build. Yet perhaps the most obvious evolution in how cars are manufactured is the use of ever more advanced technology.

Robots now do the majority of the work, up to 95% of it in some instances. Not only are they capable of lifting large, heavy components like 100kg roof panels, but they can do so with pinpoint precision. Workers on the assembly line are there to check the work, operate the machines and complete more intricate tasks like fitting smaller items and bolting items in place.

One major influence on modern car production is the philosophy of the Toyota Production System (TPS). This is based on the principles of eliminating waste and has impacted car production around the world. An important tenet of TPS is stopping production whenever a fault is found.

How Cars are Manufactured 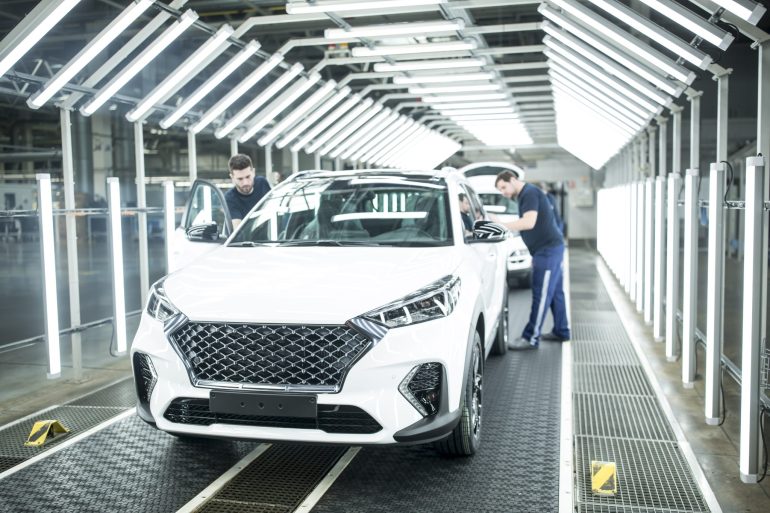 What follows is a general overview of how cars are manufactured in terms of petrol cars. Electric car production differs in several ways, notably the replacement of the engine, gas tank and other ancillary parts with an alternating current electric motor.

It’s worth noting that there is a scalable element to car production. Even in factories, some possibly robotic jobs will be done by hand, such as applying sealant or painting. Some luxury cars are still entirely crafted by hand, and built to bespoke specifications. Ferrari and Aston Martin are two examples of brands that do this.

How are Cars Made? Components

Car components are made away from the assembly line itself. By the time they arrive, each and every part has been rigorously tested according to the manufacturer’s requirements. These are then transported to the factory, where it is a matter of assembling them.

Therefore, one of the first steps in making a car is gathering its components. From the transmission to the brake rotors, the vast majority of a car’s parts will be made off-site, either by the same company or by third party suppliers. There can be thousands of such suppliers, with as many as 4,000 sending in their components, often on the day of installation, via rail or road in a sophisticated logistical web.

In answering “how are cars produced” it is the skeletal image of the car body that is most iconic. Car bodies are made of rolls of steel moulded into shape using large dies before being welded together. Whereas cars were once built in the body-on-frame system – in which the car chassis, frame and body are separate parts – nowadays the majority of cars are made using the unitized body or “unibody” method. This means the structure of the car, chassis, frame, body, crash protection and all, are one single unit.

The body is meticulously checked and cleaned in preparation for painting. A special oil is applied under stark white light, highlighting defects so they can be remedied by workers before a single drop of paint is applied. Only once it is deemed pristine can it move to paint prep.

Painting a car begins with anti-corrosion measures. The car body is dipped into a series of tanks to clean and prep the metal as well as apply an e-coat. For this the car is dipped in an undercoat inside an electrostatically charged container. The coated shell is baked at over 200 degrees Celsius, then its panels are sealed. It can now be painted.

At least three coats of paint are robotically sprayed onto the body. A primer for a smooth surface, a basecoat with the main colour, and a clearcoat or top coat that acts as a protective barrier.

Robots do the heavy lifting once more as parts are added to the shell, including the gas tank, rear axles, drive shafts and gear box as well as braking systems, steering wheel and steering components. Meanwhile, any bolting or fitting is done manually.

We’re on the inside section now of “How are Cars Built”. Most internal fittings are completed by workers. Wiring systems, pedals, interior lights, the dashboard, media system, carpets – each and every element inside the car is carefully installed.

Robots step in once again for the last major item, this being the windscreen. Held on with suction cups, it is lifted from its shipping container, its edges coated with sealant and lowered onto the car body.

After a water resistance test, the final trim can be completed, with the tires, battery, petrol and antifreeze all being added.

How are cars made on such a large scale while ensuring quality? This is down to extensive monitoring. This begins with the components, as above, but tests and audits follow each factory phase too. The Vehicle Identification Number (VIN), assigned at the start of the production line, helps to keep tabs on each individual vehicle. Increasingly, radio frequency transponders are also being installed to provide electronic tracking.

Finished and Ready to Go 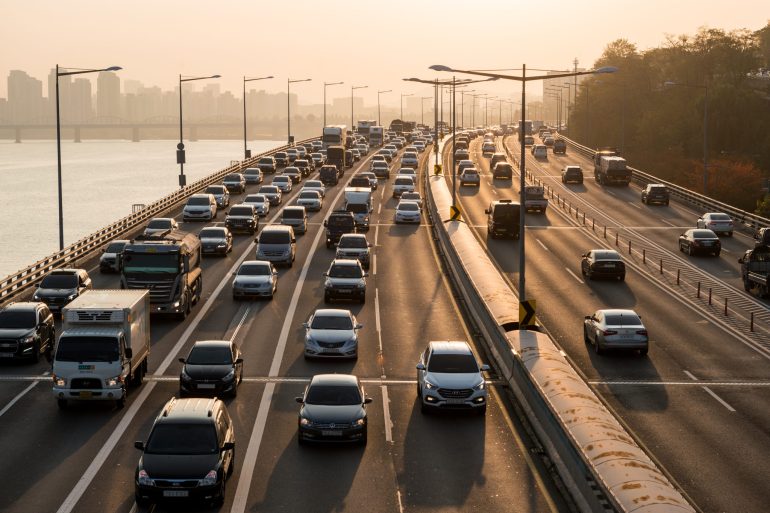 And there you have it. The answer to “How are Cars Made”. Of course, there are still checks to be done and any issues remedied, but that’s how cars are manufactured. The finished vehicle is now ready for its price sticker and shipping.