England may be a green and pleasant land, but it’s also one rich in stunning waterfalls. Read on to discover more about the surprisingly plentiful and varied waterfalls of England.

England is home to some of the most beautiful waterfalls in the world. From the stunning cascades of Cautley Spout to the crashing waters of High Force, English waterfalls are well worth the hike.

The best known waterfalls in England are situated in the north, especially in the Lake District and Pennines. In the south, Cornwall is another great place for waterfall walks. But that doesn’t mean you can’t find them elsewhere. We’ve got a fantastic list of hidden gems, including a section dedicated to waterfalls in South East England. 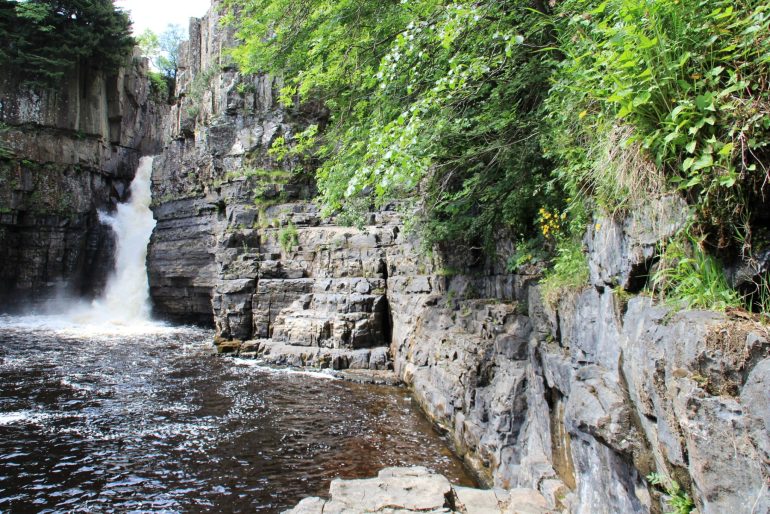 Measuring waterfalls is a complex and thorny matter, making it difficult to definitively rank England’s tallest waterfalls. At 249 feet, Cautley Spout is most frequently cited as the highest of English waterfalls, with Hardraw Force in the Yorkshire Dales often said to be its highest above-ground single drop waterfall.

A Selection of England's Best Waterfalls 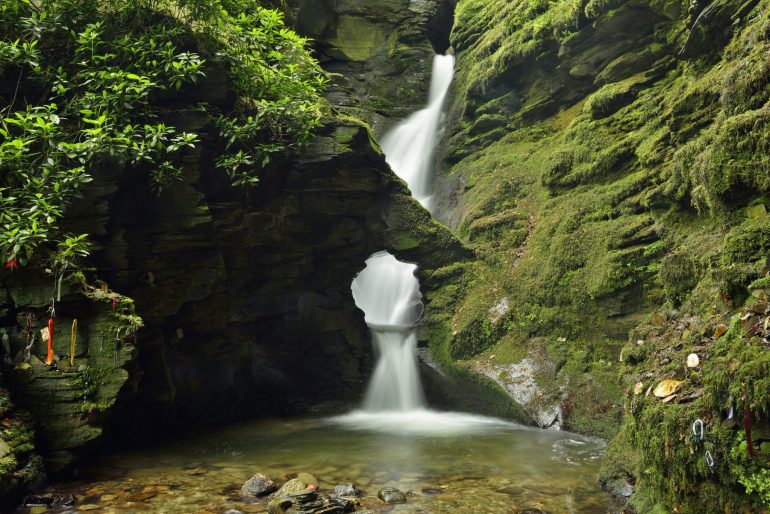 At about 65 feet high, Aira Force is fed by Aira Beck, which flows into Ullswater, the second largest lake in the Lake District. This is a prime example of a ribbon waterfall, where the Waterfall flows over a thin, even layer of rock. The water then cascades down in a series of small steps, creating a “ribbon” effect. Ribbon waterfalls are often found in areas where the bedrock is composed of shale or other sedimentary rocks that can be easily eroded by water. This beautiful effect makes Aira Force one of the best known waterfalls in England and one of its most photographed.

High Force is one of the most spectacular waterfalls in the United Kingdom. In accordance with its name, it is an incredibly powerful waterfall, sometimes splitting into two falls. Located in County Durham in the north of England, it is fed by the River Tees, plummeting 70 feet over the edge of a limestone cliff into a plunge pool below. High Force waterfall is a popular tourist destination and attracts visitors from all over the world. The waterfall is also a popular spot for hikers, as there are several walking trails in the surrounding area. Access from some directions is by private land, requiring permission.

The vision of water flowing through a shaft of sunlight into the vast cavern of Gaping Gill in Ingleton Falls Nature Reserve has an unearthly quality. And yet, this is very much a natural wonder, caused by the stream of Fell Beck as it plunges twice the height of Niagara Falls into the depths of one of the country’s largest caves.

Scale Force waterfall is one of the most popular attractions in the Lake District and said to be the highest waterfall in the area. Fed by the River Esk, it drops over 100 feet down a series of rocky ledges.

The water of St Nectan’s Glen streams like a ribbon down the mossy rocks, its 60-foot journey a frothy, glittering, fairytale fall,

You may have noticed that all the English waterfalls listed so far hail from the north and west of the country. It’s true that these areas boast the most falls, but there are some stunning examples of waterfalls in South East England. In Kent, Hothfield Waterfall was created by a dam in 1851, while Tillingbourne Waterfall in Surrey is a delicate tiered affair. 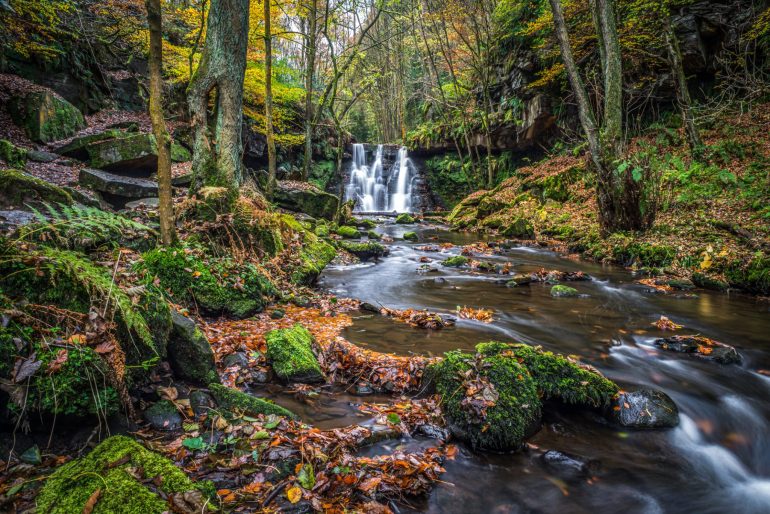 Waterfalls are one of the most spectacular natural wonders in the world. And while you might not think of it as a place with many waterfalls, there are actually quite a few English waterfalls scattered throughout the country. And so, from the best known waterfalls in England to those off the beaten track, there are plenty of to see and enjoy.