The highest mountains in Northern Ireland are conveniently close together, all part of the same mountain range. Want to know more? Strap on your hiking boots.

Northern Ireland is filled with natural wonders, from its dramatic coastline and Giant’s Causeway to Lough Neagh. Its landscape is a mix of hills and lowlands with five out of its six counties having a highland region. The Sperrins are one of the main ranges, its highest elevation being Sawel at 2,224 feet. However, for those who seek the highest mountains in Northern Ireland, there is only one place to go: The Mournes.

The Mourne Mountains are huddled closely together in County Down in the southeast of the country. The granite range dates back to the Ice Age, and is estimated to be 50 million years-old. It is home to ten of Northern Ireland’s 19 mountains over 2,000 feet. In fact, all the mountains on this list are part of the Mountains of Mourne, including Northern Ireland’s highest peak. So, what is the biggest mountain in Northern Ireland? Read on to find out. 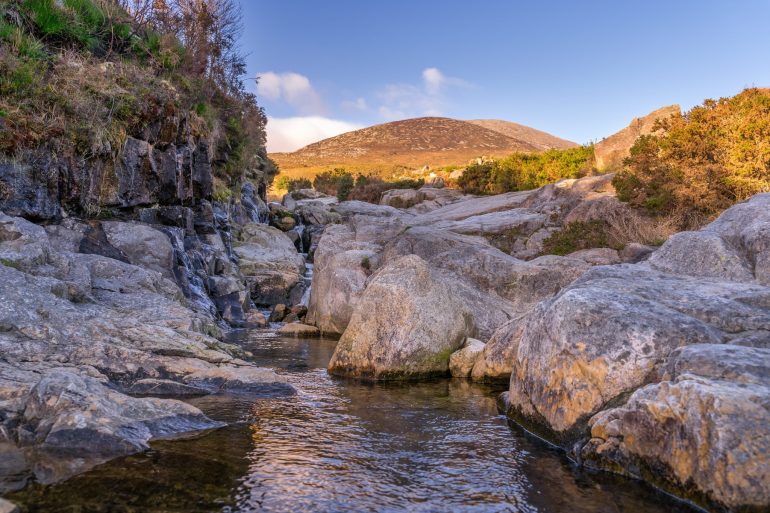 At an elevation of 2,790 feet, Slieve Donard is the tallest mountain in Northern Ireland. Set in the northeastern part of the Mournes, it’s under the remit of the National Trust. It’s thought to be around 340 million years old and composed of a pink-hued granite.

Amongst its many notable features, Donard is noted for its steep slopes. However, it is considered a moderate climb and is a popular destination for hikers and climbers. And, as one would expect of Northern Ireland’s highest peak, those who reach its exposed rocky summit are treated to spectacular views. In fact, it’s said that in clear conditions one can see as far as Dumfries and Galloway in Scotland, Snaefell on the Isle of Man and England’s Lake District.

History fans can also enjoy the two prehistoric cairns that sit atop the summit of Slieve Donard. The Great Cairn, which houses Ireland’s highest passage tomb, dates back as far as 3300 BC. While the Lesser Cairn is thought to be about a thousand years younger, perhaps circa 2300 BC.

The mountain’s namesake is St. Domhanghart. Sometimes known as St. Donard, he was a hermit who lived on the summit until his death in 506 AD. In fact, it’s thought that he used the cairns as his hermitage and oratory. 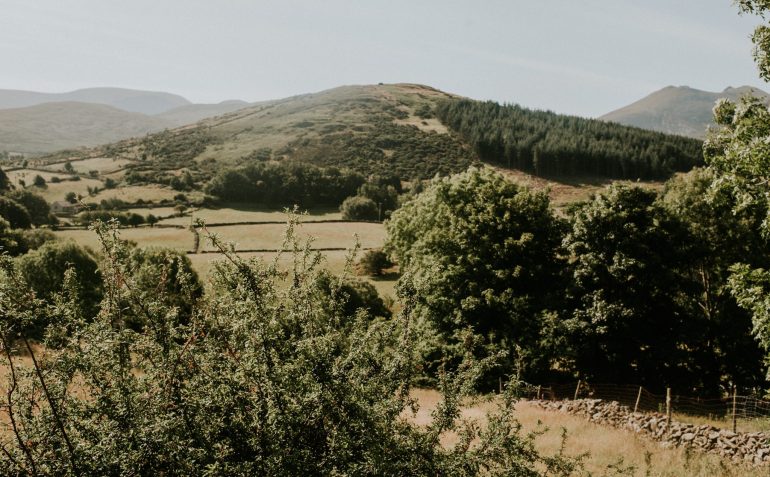 The second biggest mountain in Northern Ireland, Slieve Commedagh is located in the southwest of the Mourne Mountains and has an elevation of 2,516 feet. The mountain is part of the Slieve Commedagh Massif, which also includes its neighbouring peaks of Slievecorragh, Slievenabrock, Shan Slieve, and Slievenamaddy.

Like its neighbour, Slieve Donard, it is topped by an ancient burial cairn. It’s also famed for its one-room tower, part of the Mourne Wall. 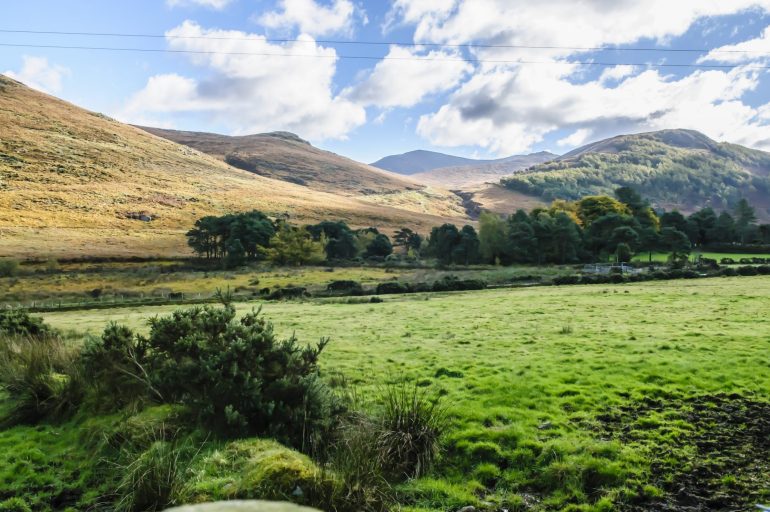 Slieve Binnian is a rugged mountain rising to a height of 2,451 feet, making it the third highest point in Northern Ireland. Its Irish name, Sliabh Binneáin, translates as ‘mountain of the little peaks’, hinting at what one can expect to find at its summit. For, while it flattens to a plateau, its north and south ends each boast small rocky peaks known as tors. And these bookend a further set of geological protrusions, a series of granite towers known as the Back Castles.

While Binnian’s summit offers stunning views, it is its base where one finds the engineering accomplishment for which it is best known. The Binnian Tunnel is a route that runs for two and a half miles through the mountain’s base. It took 150 men around four years to construct, completing it in 1951. 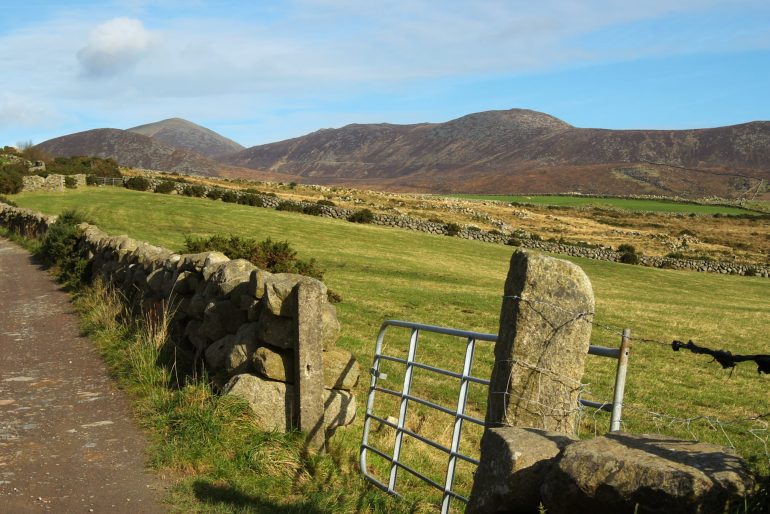 Located in the heart of the Mournes, the 2,425-foot high Slieve Bearnagh is the fourth tallest mountain in Northern Ireland. Its name derives from the Irish ‘Sliabh Bearnach’ or ‘gapped mountain’. This is a reference to Bearnagh’s unusual shape, caused by the two granite tors at its summit, separated by a gap. 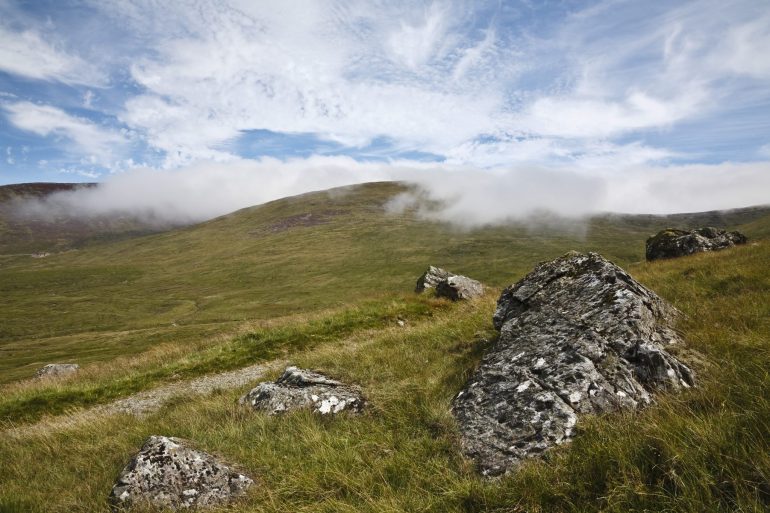 At number five in the list of the highest mountains in Northern Ireland, Slieve Meelbeg rises to an elevation of around 2,323 feet. Its Irish name, Sliabh Míol Beag, means small mountain of ants or perhaps anthill. And with its reddish hue and gentle slope, one could argue it is an apt moniker. Meelbeg is often twinned with the seventh highest mountain in Northern Ireland, Slieve Meelmore. 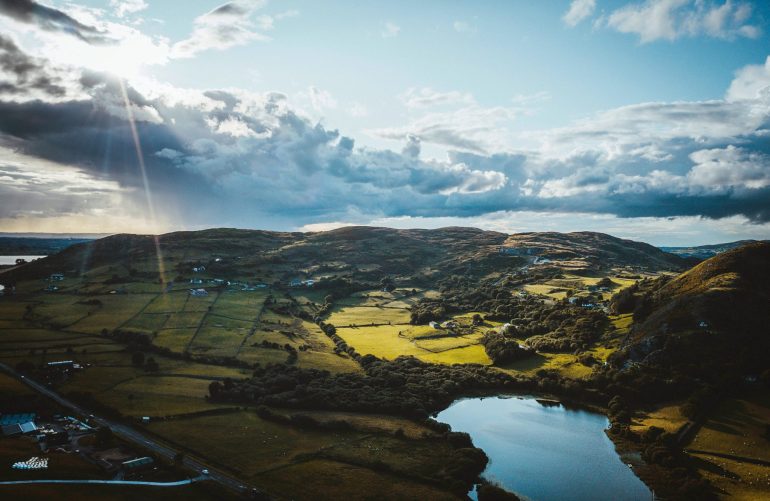 The final major peak in Northern Ireland is Slieve Lamagan. Despite being the smallest on the list, it is considered a challenging climb. Indeed, its name means “by hands and feet”. 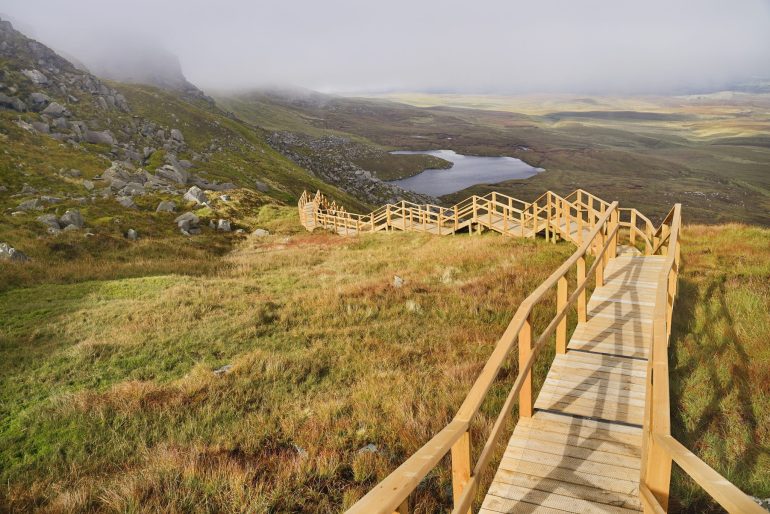 And so, Northern Ireland’s highest peak is Slieve Donard. It tops the list of mountains within the country exceeding 2,000 feet. In order, the complete list of these is as follows: