The Duel Of Ganryu-Jima is the stuff of legend; the story of two mighty samurai fighting to the death. But what really happened on Ganryu Island? And who were Sasaki Kojiro and Miyamoto Musashi?

It is said that on 13 April 1612, two great Japanese samurai engaged in a battle to the death. It was a showdown between arch rivals Sasaki Kojiro and Miyamoto Musashi. And it would come to be enshrined in Japanese lore as the Duel Of Ganryu-Jima.

The story has been told and retold myriad times over the centuries. And yet, doubts are cast not just on the details of the duel, but as to the very existence of one of its combatants. So, what happened on Ganryu Island? And who, if anyone, was Sasaki Kojiro? 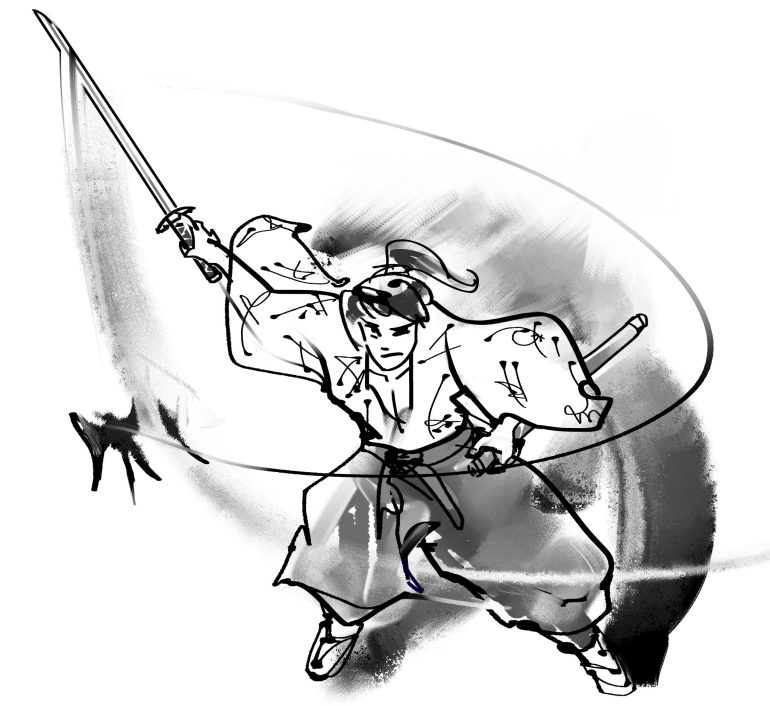 If legend is to be believed, Sasaki Kojiro, sometimes cited as Kojiro Sasaki, was born around 1575 in Japan’s Fukui Prefecture.

Kojiro studied the Chujo-ryu style of swordsmanship and soon earned a reputation as one of Japan’s finest swordsmen, going by the fighting name Ganryu, translated as ‘Large Rock style’. He went on to found the Ganryu school and his preferred sword was the nodachi, at least 20 centimetres longer than the traditional katana.

However, things aren’t necessarily clear-cut, as some doubt that Sasaki Kojiro was a real person at all, citing a lack of evidence for his existence.

Who was Miyamoto Musashi? 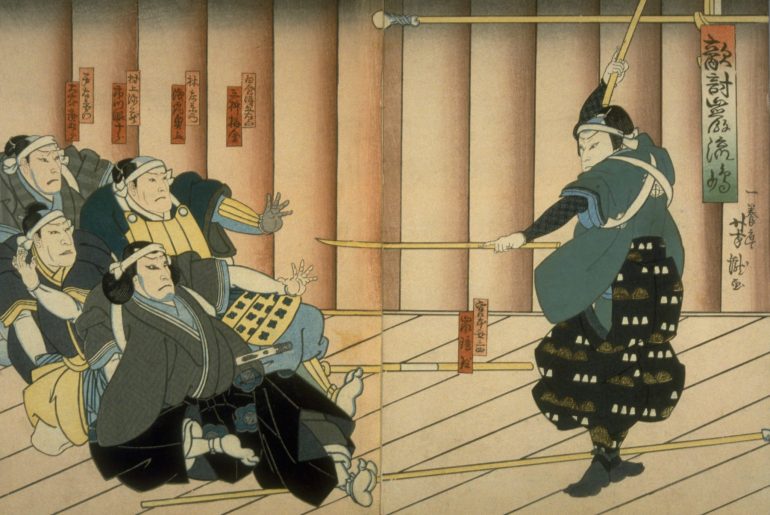 Born in approximately 1584, Miyamoto Musashi was a renowned swordsman, writer and a samurai without a master or “ronin”. He was known by many names, including Miyamoto Bennosuke, Shinmen Takezo and by his Buddhist name Niten Doraku. He was also considered a kensei, an honorary title which translates as ‘sword saint’.

Musashi’s most famous work, The Book of Five Rings, is still used to this day. In it, he wrote about strategy, tactics and sword fighting philosophy. Publicly, he adhered to the strict warrior code. However, some say that he would go to any lengths in the pursuit of victory.

A Date to Duel 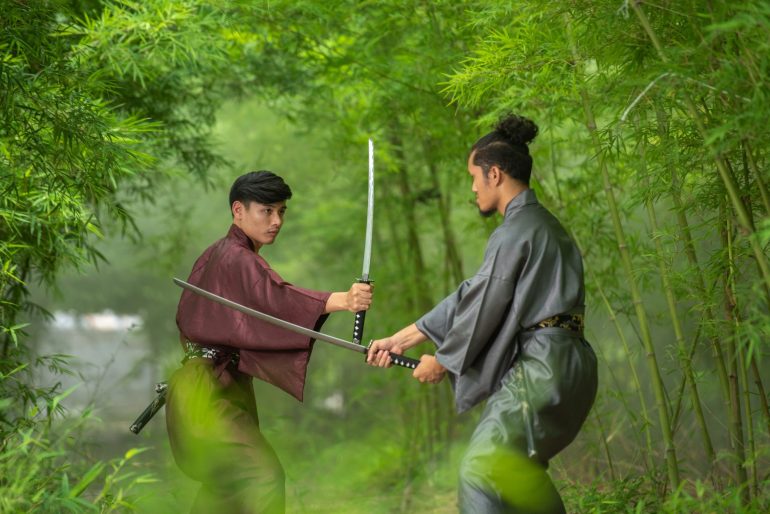 There are many varying accounts of the Duel Of Ganryu-Jima and the events leading up to it. What follows is considered the most widely accepted version.

In 1612, Sasaki Kojiro and Miyamoto Musashi were samurai at the top of their game, and the bitterest of rivals. Duels between samurai were common at the time, allowing them to pit themselves against their peers. The story goes that it was Musashi who arranged such a duel between him and Sasaki Kojiro. He did so through an intermediary, the respected samurai Hosokawa Tadaoki.

Where is Ganryu Island? 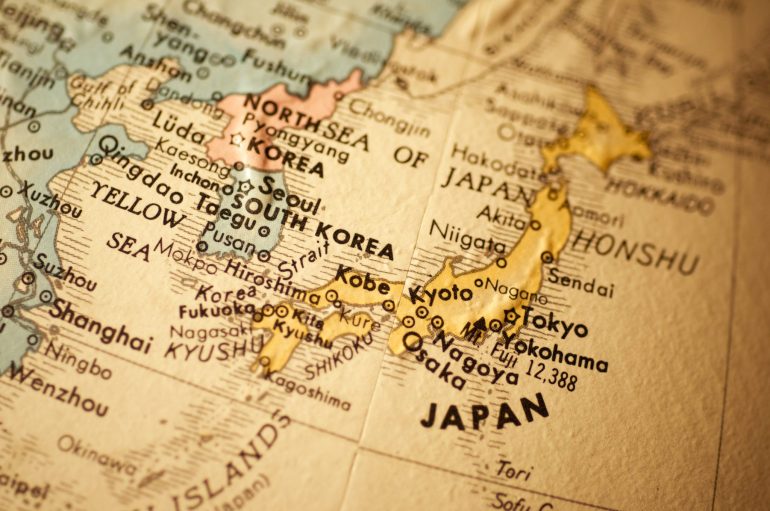 The island of Ganryu-jima is a mere speck sandwiched between two of Japan’s main islands, Honshu and Kyushu. Today, it’s accessible by ferry, but in the 17th century, it was considered a remote place. In fact, this was the main reason Musashi chose it for the duel. It is said that Kojiro had many disciples who would kill Musashi in the event of his victory. Thus Musashi believed that an isolated location would keep them away.

At the time of the Duel Of Ganryu-Jima, the island would have measured not more than around four acres in size. Today, due to landfill formerly maintained by Mitsubishi Heavy Industries it has been artificially enlarged to around 25 acres.

After World War II it was home to about 30 families, but it has been uninhabited since the 1970s. Today, the eastern half of the island is a public park and its most popular spot is the pair of statues that pay homage to two mighty adversaries who fought to the death. This is the story of the Duel Of Ganryu-Jima.

The Great Duel of Ganryu-jima 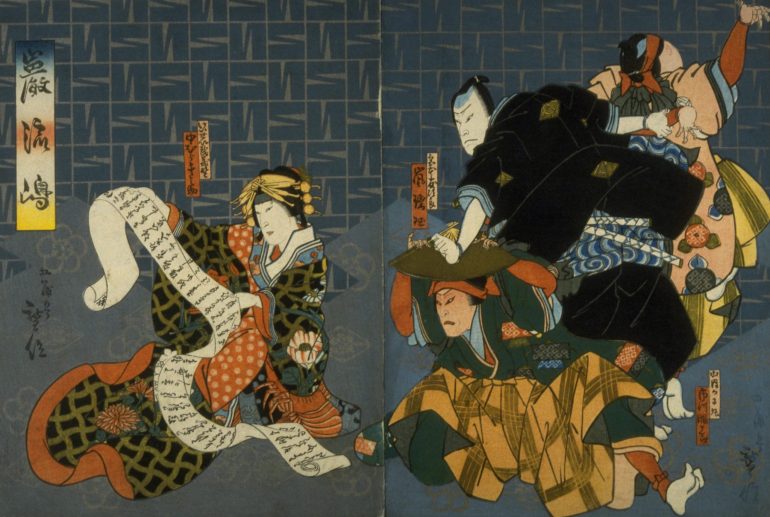 On the morning of the duel, Sasaki Kojiro arrived on Ganryu Island on time and immaculately groomed. By contrast, Musashi arrived three hours late and dishevelled.

Kojiro and the officials considered this a blatant show of disrespect and dishonourable contempt for the warrior code. In a fit of rage, Kojiro drew his scabbard and discarded his sheath, prompting Musashi to declare: ‘If you have no more use for your sheath, you are already dead.’

Musashi then further insulted Kojiro with his choice of weapon, unveiling a sword not of metal but of wood. It is believed to have been carved from an oar that morning and crucially, was an inch longer than his opponent’s weapon.

Many believe that Musashi’s actions that mild morning were designed to enrage Kojiro, to make him lose control. If so, it worked. Kojiro attacked first, and it was a fatal move.

The Legacy of the Duel of Ganryu-jima 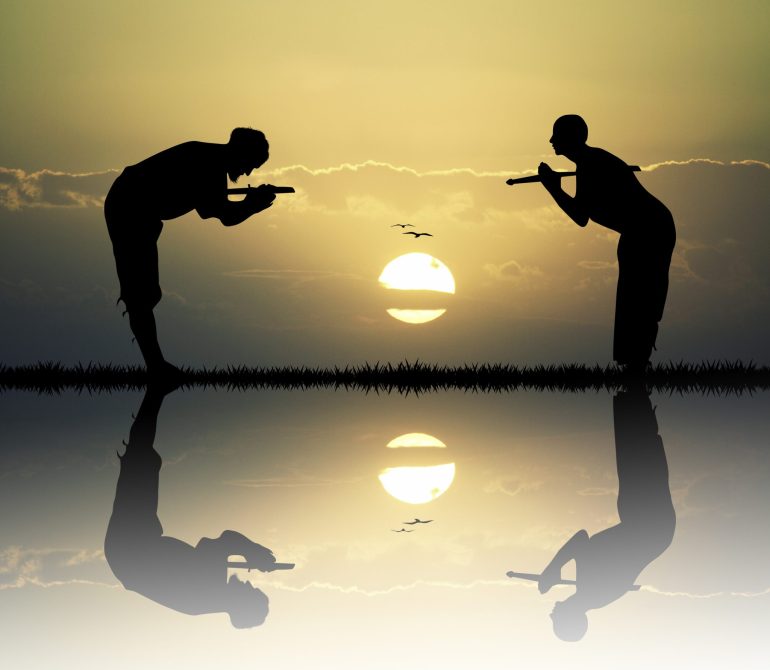 Following the duel, it’s said that Musashi was overcome with sadness and bowed to his fallen rival. One version of the story claims that he later attained a spiritual awakening, retreated to a cave and vowed never to fight again.

We’ll never know what happened, or in fact if the fight happened at all. Nevertheless, the story of the duel of Sasaki Kojiro and Miyamoto Musashi endures, and continues to be immortalised to this day in print, on screen and even in video games.