Of the many superstar fighters throughout the history of muay Thai, none has been more glorified than Nai Khanom Tom. Read on to find out the astonishing story of this national hero.

The national sport of Thailand goes by many names. Some call it muay Thai, the art of eight limbs, king of the ring, or Thai boxing. Others simply refer to it as muay. But however it’s described, this dangerous combat style is renowned for its devastating power. Its efficiency in delivering strikes and methodical wearing down of opponents makes it a fearsome force on the Mixed Martial Arts – or ‘MMA’ – circuit.

However, what we now call Thai boxing has evolved over centuries. The origins of muay Thai can be traced back to the ancient kingdom of Ayutthaya and to a single soldier who would come to be regarded as the father of muay Thai. His name was Nai Khanom Tom. And his story, one steeped in myth and legend, would eventually transform the battlefield tactics of the Siamese army into a global martial art.

The History of Muay Thai 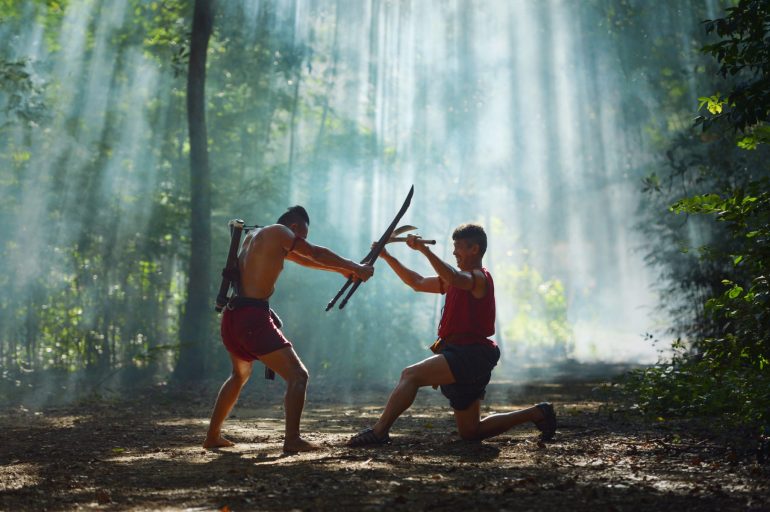 The history of Thai boxing goes back to the 13th or 14th century, in what was then Siam. It evolved from the weapons-based combat style of the Siamese army, Krabi Krabong. However, rather than wielding weapons, muay Thai envisioned the fighters themselves as weapons with eight points of contact. The feet, knees, elbows and fists operated as one coherent unit to mimic the weapons of war. Fists became swords; knees and shins became armour; elbows became hammers and legs and knees became axes. It was this that earned muay Thai the moniker of the ‘art of the eight limbs’. But as to how it would become the Thai boxing of today, that began with the fall of Siam’s capital, Ayutthaya.

The Fall of Ayutthaya 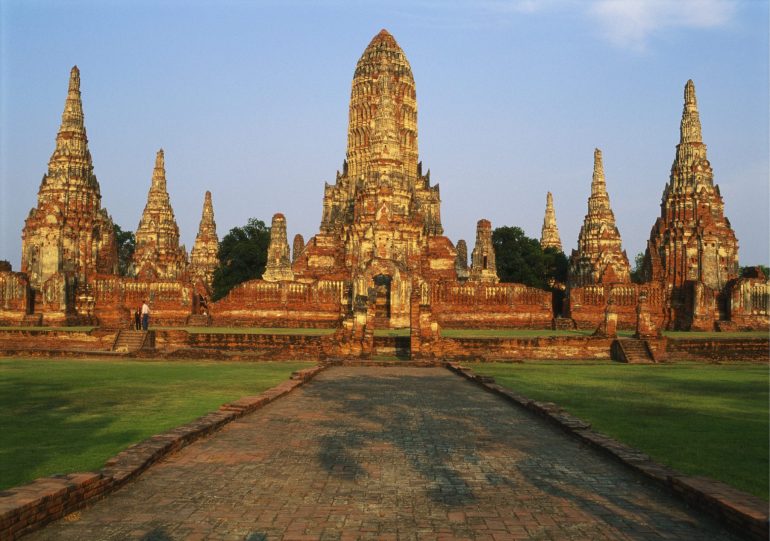 The city of Phra Nakhon Si Ayutthaya was the seat of the Kingdom of Siam, home to over a million people and one of Southeast Asia’s major powers.

The 18th century saw Siam and what was then Burma (Myanmar) engaging in intermittent conflict, with the first Burmese-Siamese War taking place between 1759 and 1760. However, it was in 1767, in the second Burmese-Siamese War, that the Ayutthaya Kingdom fell.

The army of Hsinbyushin, King of Burma, laid waste to the city and burned it to the ground. They also captured hundreds of Siamese soldiers and took them back to Burma. One of the soldiers was Nai Khanom Tom. 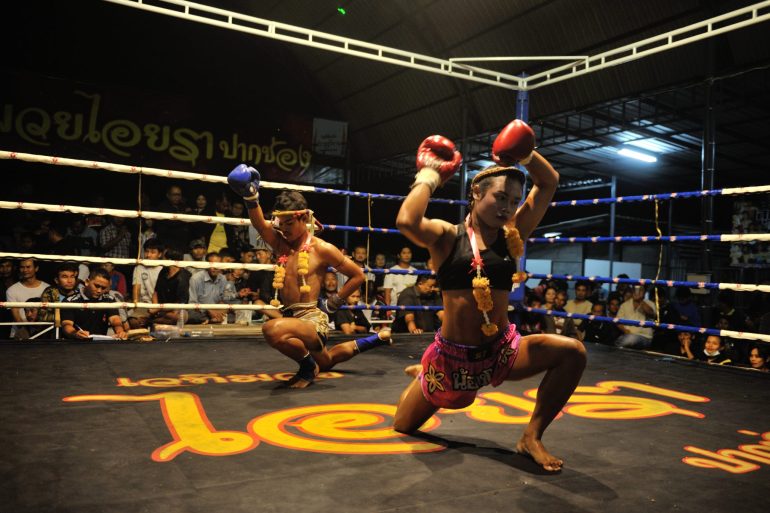 Today, Wai Khru, continues to be performed before a fight (Photo: Atid Kiattisaksiri via Getty Images)

Legend has it that the Burmese king wanted to celebrate his victory by organising a hand-to-hand combat fight between Burma’s best fighter and the best fighter from Ayutthaya.

Nai Khanom Tom was chosen to fight and performed the traditional pre-fight wai kru ritual, a dance which the Burmese perceived as black magic. He then proceeded to annihilate Burma’s champion.

Believing he won by luck, the king ordered nine further champions into the ring, one after another, without a break. Nai Khanom Tom defeated every one.

After the fights, the king was reported to have said:

‘Every part of the Siamese is blessed with venom. Even with his bare hands, he can fell nine or ten opponents. But his Lord was incompetent and lost the country to the enemy. If he had been any good, there was no way the City of Ayutthaya would ever have fallen.’

The king freed Nai Khanom Tom and his fellow prisoners and the Father of Muay Thai returned home a hero. 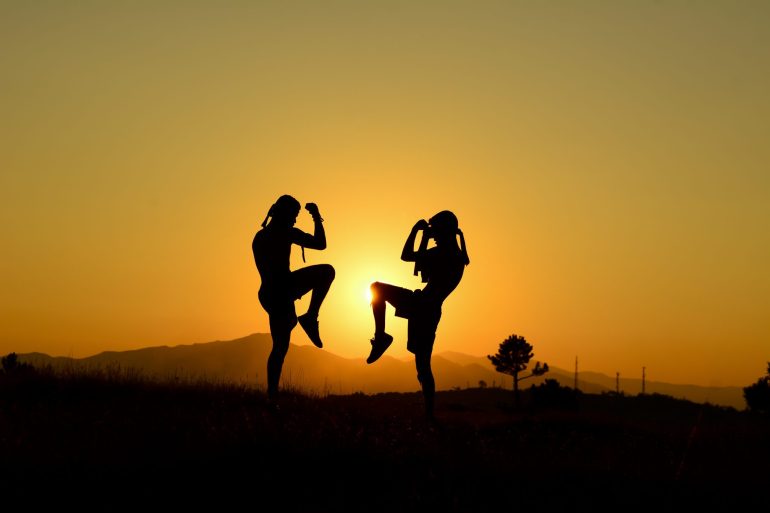 Today, Nai Khanom Tom is a household name. His legendary victory, the most famous in the history of Thai boxing, is celebrated annually on what is believed to be its anniversary, the 17th of March. Known as National Muay Thai Day, it is marked with festivals of boxing and celebrations up and down the country.

The Modern History of Thai boxing 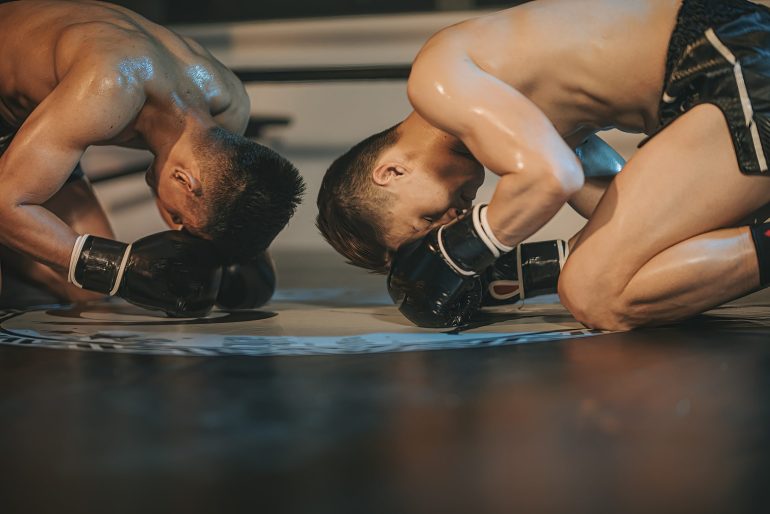 Muay Thai boxers bow to each other rivalry before the competition (Photo: Edwin Tan via Getty Images)

However, the muay Thai of today is quite different to that of Nai Khanom Tom. The 20th century saw what was a practically lawless martial art transform into one with defined time limits, safety equipment, rules and a governing body, the World Thai Boxing Association.

And so, the origins of muay Thai and history of Thai boxing are inextricably linked, both with the fall of Ayutthaya and with the legend of one man, Nai Khanom Tom.