A triathlon is one of the most physically demanding athletic competitions in the world. Comprising running, cycling and swimming with little or no break between each event, triathletes are some of the fittest people on the planet. Read on to find out what is an ironman triathlon, what is a sprint triathlon and how far some people are prepared to go - literally and metaphorically - for athletic immortality!

The triathlon – whether we’re explaining what is an Olympic triathlon, an Ironman or a Sprint triathlon – stands head and shoulders above most other sporting events as a thorough test of mind, body and spirit.

From the first three-sport events in France in the early years of the twentieth century to today’s ultra-triathlons, the sport has become the ultimate endurance event. Here, we’ll answer the question ‘what is triathlon’. You’ll get tired just reading about it! 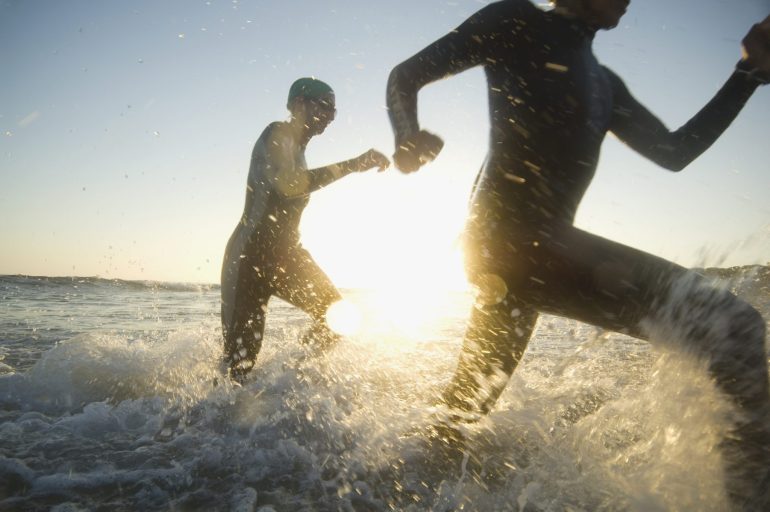 There doesn’t appear to be a ‘place and time’ where the triathlon was invented or created, rather it was an evolution of multi-sport events that seem to have started in France in the early 1900s.

The first events were known as ‘Le Trois Sports’ and were made up of running, cycling and canoeing. These events eventually spawned the modern triathlon, though even up to the 1970s there was no unified set of rules, and it remained an event on the periphery of world athletics.

It wasn’t until 1974 that we could answer the question ‘what is triathlon’. Jack Johnstone and Don Shanahan of the San Diego Track Club conceived of a three-sport event and named it the triathlon – ‘tri’ being the Greek for ‘three’ and ‘athlon’ the Greek for ‘competition’ or ‘prize’. Interestingly, it’s said that neither man knew of the French events, and believed theirs was a brand-new idea.

The first event consisted of a 4.8km run, an 8km cycle and a swim from Fiesta Island to the mainland, as well as a barefoot run and another swim. It took much longer than originally thought and cars pulled up on the riverbanks with their headlights on so the competitors could see where they were going, but this is where the triathlon started.

It came to Europe in the early 1980s and it was finally added to the Olympic programme of events for the 2000 Games in Sydney.

What is an Olympic Triathlon? 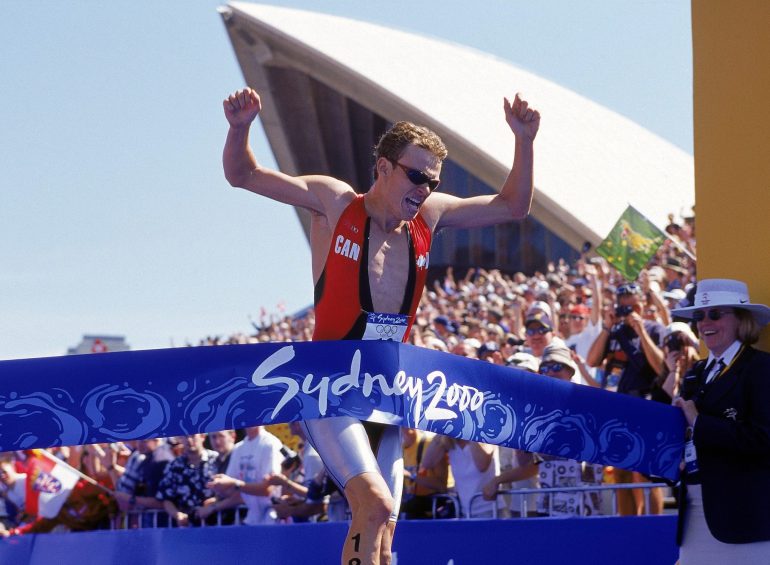 17 Sep 2000: Simon Whitfield of Canada crosses the line to win gold in the Men's Triathlon at the Sydney Opera House on Day Two of the Sydney 2000 Olympic Games in Sydney, Australia (Photo: Adam Pretty via Getty Images)

The standard Olympic triathlon comprises a 1.5km swim, a 40km bike ride and a 10km run.

The inaugural gold medallists at the 2000 Olympics were Canadian Simon Whitfield in the men’s event and Brigitte McMahon representing Switzerland in the women’s event.

Currently, the only athlete to win back-to-back Olympic gold medals in the triathlon is Briton Alistair Brownlee, who won the title at London 2012 and again at Rio 2016.

What is a Sprint Triathlon? 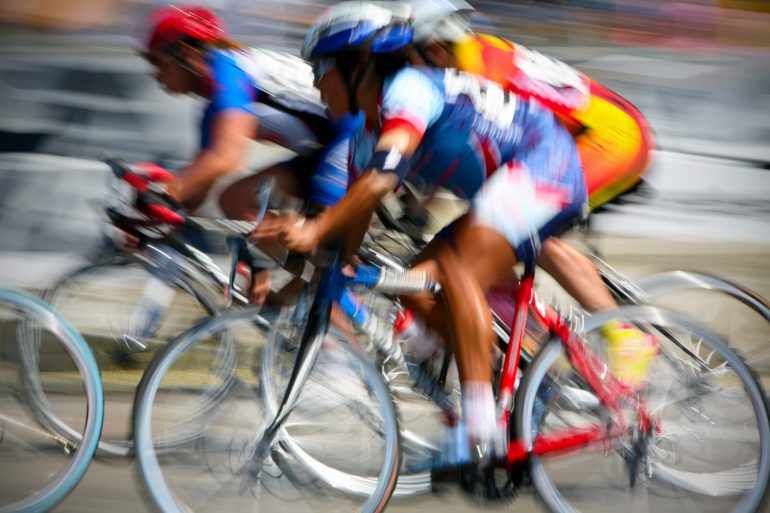 A frantic race to the finish! (Photo: P_Wei via Getty Images)

A sprint triathlon (often known as a mini-triathlon) is half the Olympic distance so it involves a 750 metre swim, a 20km bike ride and a 5km run.

There is also a recognised Super-Sprint event which is a 400 metre swim, a 10km bike ride and a 2.5km run and these distances are usually used for the individual legs of the Olympic and World Mixed Relay events.

What is an Ironman Triathlon? 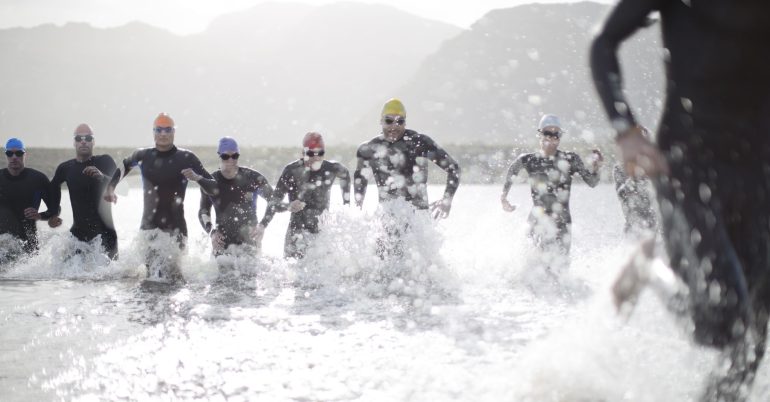 The Ironman triathlon dates back to Hawaii in 1978 and is considered to be one of the most gruelling one-day sporting events ever created. The classic Ironman event consists of a 3.86km swim, a 180.25km bike ride and a marathon-length run (42.2km). At the start of the very first event, US Navy Commander John Collins said ‘whoever finishes first, we’ll call him the iron man!’

In recent years, longer distance events have appeared in the triathlon calendar – known as ultra-triathlons – including the 222 event which is 2km swimming, 200km cycling and 20km running.

These are most certainly not for the faint-hearted! 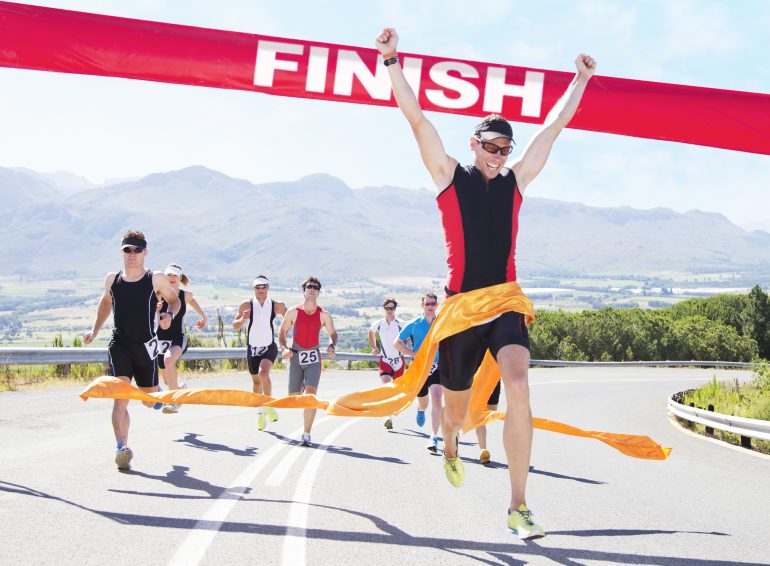 You are correct in thinking that the triathlon is made up of three events, but there’s a fourth element that the athletes train just as hard for. These are known as the transitions.

When we explain ‘what is triathlon’ these transitions need to be taken into account as this is where significant amounts of time can be won or lost. In tight races they can be the difference between winning and losing.

The first transition comes after the swim where you exit the water and run to your bike. You need to put your shoes on, unhook your bike and put your helmet on. In fact the helmet must go on before you even touch the bike and must stay on until dismount.

The second transition is after the cycling leg where the helmet comes off, the bike has been correctly racked and you have changed your footwear from cycling shoes to running trainers.

So now you know all about the triathlon including what is an Olympic triathlon and what is an Ironman triathlon, are you tempted to get out there and give it a tri…?