Said to have over 60 million practitioners spread across 184 countries, it’s surprising to learn that the Korean martial art of taekwondo is amongst the youngest of its kind. So, what is taekwondo? And what does taekwondo teach?

Taekwondo is a Korean martial art and the national sport of South Korea. It’s distinguished by its use of kicking and punching techniques, as well as its strict discipline and code of conduct. Developed in the 1940s and 1950s, it is a relatively modern martial art, compared to others such as karate and judo. Nevertheless, taekwondo has amassed millions of practitioners worldwide and is an official Olympic sport.

So, what is taekwondo? What does taekwondo teach? Beginning with the history of this martial art, we’ll look at its rules, principles and attire, as well as answering “what is the order of belts in taekwondo”.

What does Taekwondo mean? A History 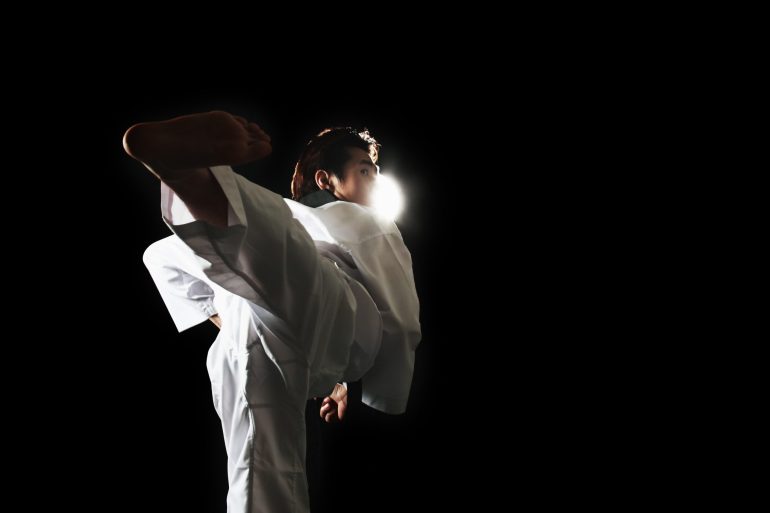 In discovering the history of this martial art, much can be learned by asking, what does taekwondo mean? Sometimes spelled Tae Kwon Do or Taekwon-Do, the word taekwondo is made up of three Korean words: tae (땅, “foot”), kwon (권, “fist”), and do (도, “way”). Thus, it can be translated as “the way of the foot and fist”. Taekwondo is often referred to as “the art of kicking and punching”, and indeed, kicking and punching techniques are the hallmark of this martial art.

Taekwondo originated in Seoul, South Korea in the 1940s, with the opening of nine main martial arts schools or “kwans”. Combining traditional national martial arts – such as taekkyeon – with Japanese and Chinese arts, taekwondo began to emerge. It is unclear as to when the name “taekwondo” became widely used, but it was adopted by the South Korean military in the fifties. Along its journey, the nature and style of taekwondo has been a source of dispute. Beginning in 1959 with the founding of the Korea Taekwondo Association (KTA), then the International Taekwon-Do Federation (ITF) in 1966 and finally the Kukkiwon in 1972, different federations vied to answer the question “what does taekwondo teach”.

All three of these organisations continue to function today, with the addition in 1973 of the World Taekwondo Federation. Now known as World Taekwondo, this is the main governing regulator of worldwide competitions, including the Olympics since 2000 and the Commonwealth Games since 2010. 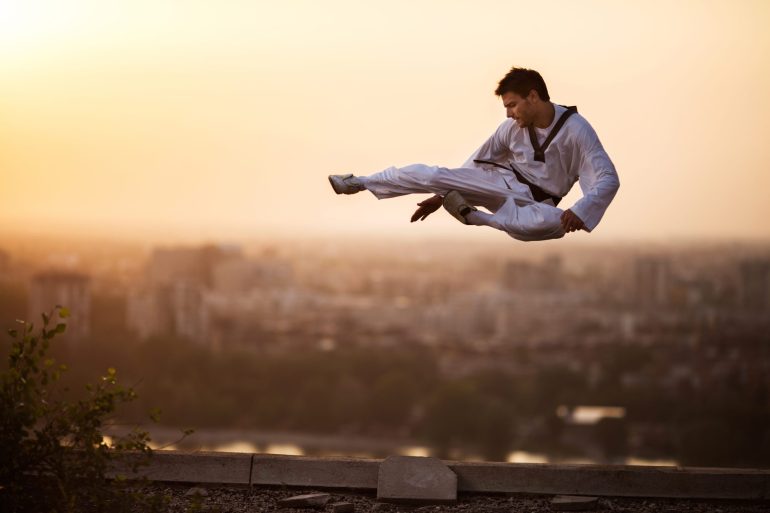 Taekwondo fighter performing high kick while being in mid air at sunset in fly-kick pose (Photo: skynesher via Getty Images)

So, what is taekwondo in practice? For starters, it is a unique combination of self-defence and attack. It is known for its striking techniques, which include punches, kicks, and sweeps. A dynamic and acrobatic martial art, practitioners often perform impressive feats of dexterity and strength.

In Taekwondo, there are three main disciplines: Kyorugi, Poomsae and Kyukpa. Each has different rules and, of these, Kyorugi is the most commonly used for sparring. Meanwhile, Poomsae is focused on form and Kyukpa on breaking.

A taekwondo match is a physical competition between two opponents and takes place in an 8×8 metre contest area. A match has three rounds, each of two minutes duration, with one-minute rest periods in between. The person who scores the most points in the match is the winner. If the three rounds result in a draw, a fourth round will be conducted. If the score is still tied, the winner will be judged by the officials based on the initiative shown during the final round.

The traditional white trousers and top worn in taekwondo are known as a dobok, over which is tied a belt denoting rank. In competitions, contestants will also wear a red or blue trunk protector or “hogu”, as well as protection for the head, groin, forearms, shins, hands and mouth.

What is Taekwondo’s Scoring System? 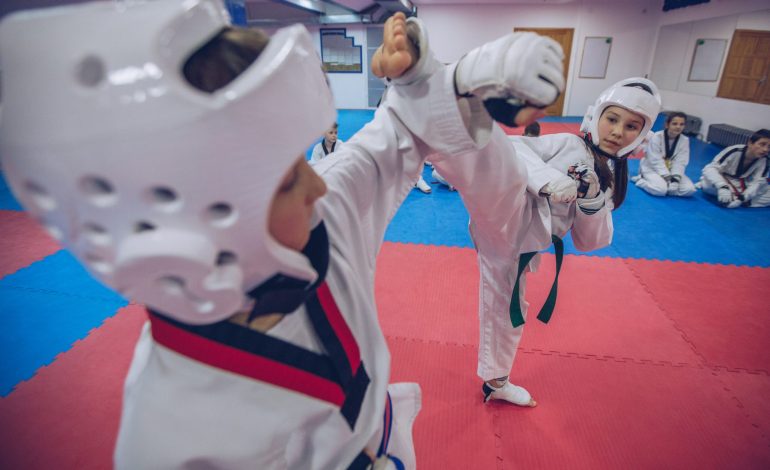 Contestants must abide by strict rules as to the parts of the feet and hands that can be used to strike, as well as where they may apply certain strikes. For example, one can use the foot for head strikes, but not the hand.

What does Taekwondo Teach? 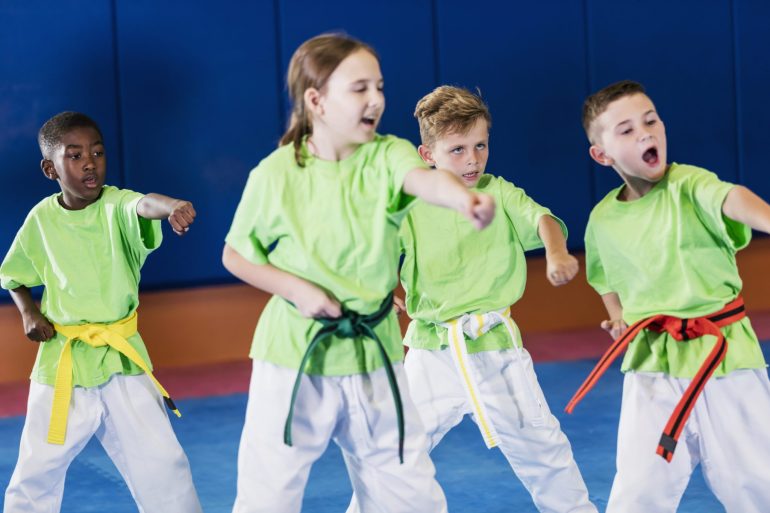 In asking “what does taekwondo teach”, there is a distinction between the sport and the martial art. For example, whilst not part of official competitions, set movement sequences, known as Poomsae, form a vital aspect of progression in taekwondo’s belt system. In these, practitioners learn a set of moves and must demonstrate them.

Another core aspect of taekwondo is its theory of power. This states that speed creates more power than size, and that a stronger technique will require more energy to perform than a weaker one.

Beyond the physical aspects, Taekwondo is also a way of life for many people, a discipline that helps to instil values of respect, discipline, and self-control.

What is the Order of Belts in Taekwondo? 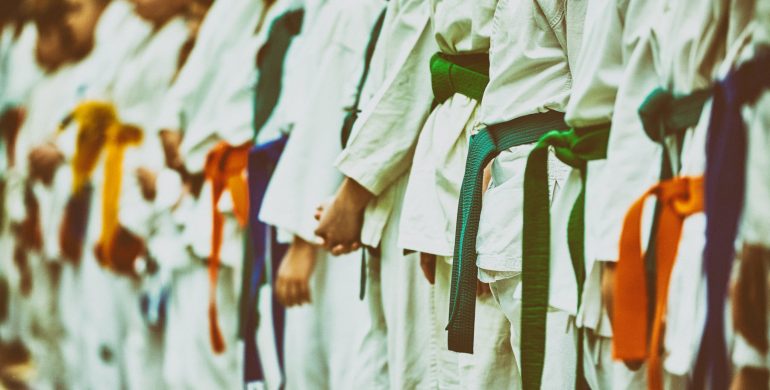 So, what is the order of belts in taekwondo? There are two levels to the belt system: Kups and Dans. Students begin with Kups, working in descending numerical order, and progress to Dans.

What is the order of Belts in Taekwondo Kups ?

What is the order of Belts in Taekwondo Dans?

Dan ranks begin at 1st Dan and move upwards to 10th Dan. Dans wear a black belt with each rank progression usually marked by the addition of another gold stripe across the tip.