They say the sky’s the limit, but for some, it’s just the start. Like, say, those people who jump out of planes at 13,000 feet, just for fun. Want to know more? Read on to learn, what is skydiving?

The lure of flight, or at least achieving an authentic sensation of it, has probably been around as long as humans have trudged around the Earth. The good news is, there are plenty of air sports that offer just that.

From parasailing to paragliding and even base jumping, the invention of the parachute has opened up a world of aerial opportunity. But for those who crave the highest heights, there is only one go-to sport: Skydiving.

So, what is skydiving and how did it develop? What is tandem skydiving and what is a static line jump? Oh, and what’s the world record for the highest skydive? 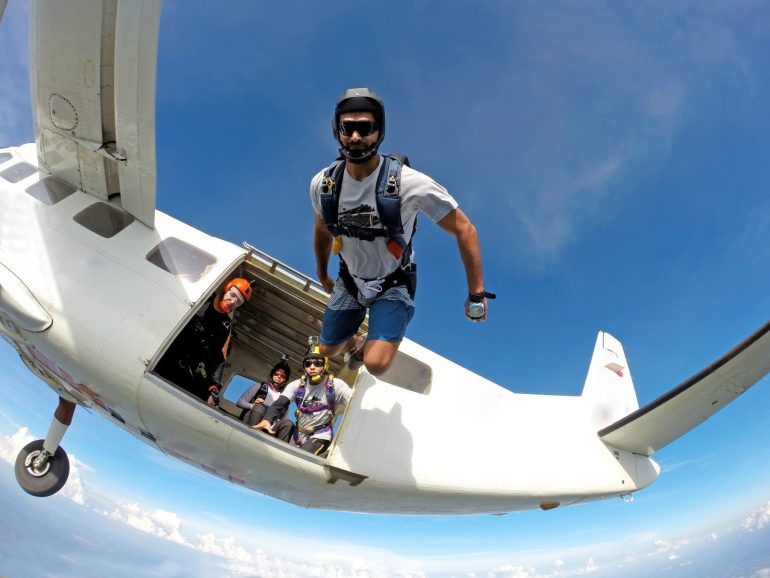 Leaping out of a plane (Photo: Graiki via Getty Images)

Skydiving is the recreational form of parachuting. This extreme sport involves jumping out of an aircraft at altitudes typically ranging from 7,500 to 15,000 feet, then freefalling for around 40 to 90 seconds at speeds up to 130 miles per hour before deploying a parachute. This is typically done at 2,500 feet. The parachute, an aeronautical device that increases the body’s surface area and thus its air resistance, slows down the skydiver’s descent to approximately 10 miles an hour so that they can land safely on the ground.

While traditional parachutes were round, nylon affairs, sports parachutes are rectangular ram-air airfoils with toggle controls. Most skydiving today is done from a propeller-driven plane, but hot air balloons, helicopters and other aircraft are sometimes used. The standard skydiving kit is a jumpsuit, helmet and goggles, but here too there is wide scope for variation, which can impact the experience. For example, wearing a baggier jumpsuit results in a slower freefall rate. 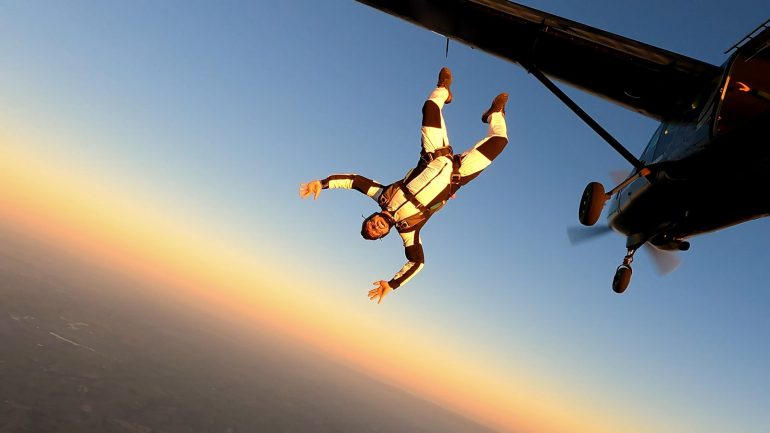 A Skydiver in free fall at sunset (Photo: Graiki via Getty Images)

Before exploring “what is skydiving” today, it’s worth noting the incredibly long history of skydiving and parachuting. Chinese literature has hinted at parachuting escapades as far back as the 2nd century BC, albeit with parasols. There is even a tale of them being used in a 14th century coronation. And, even though none of these stories can be verified, they certainly point to a level of understanding of the concept.

Jumping forward around a century and over in Italy, Leonardo da Vinci designed a pyramidal linen parachute with wooden poles to hold it open. Nobody knows if da Vinci ever tried this out however and it is 18th century France that is credited as the parachute’s origin source. Indeed the word itself is a blend of the Latin word ‘para’ meaning ‘against’, and the French ‘chute’ which means ‘fall’.

There were several parachute creations floating around France in the late 1700s, but in 1797 Andre Jacques Garnerin proved he had created a device capable of use at high altitude, becoming the first person to parachute around 3,000 feet from a hot air balloon.

As for jumping from a plane, this would not be achieved until 1912 by US Army Captain Albert Berry. Indeed, the military would play an important role in developing parachuting. Confined to use as a means of emergency escape at the start of World War I, they would become widely used by the end of the conflict. And parachuting really came into its own in World War II, as demonstrated by the establishment of The Parachute Regiment in the British Army in August 1942.

Even after the war, ex-paratroopers like Terence Willans and Ronald Wilson would become pioneers in exploring the sporting potential of parachutes. This would culminate, in the 1950s, with parachuting becoming an official aeronautical sport accepted by the World Air Sports Federation, the Fédération Aéronautique Internationale (FAI). The first world parachuting championships took place in Yugoslavia in 1951.

What is the World’s Highest Skydive 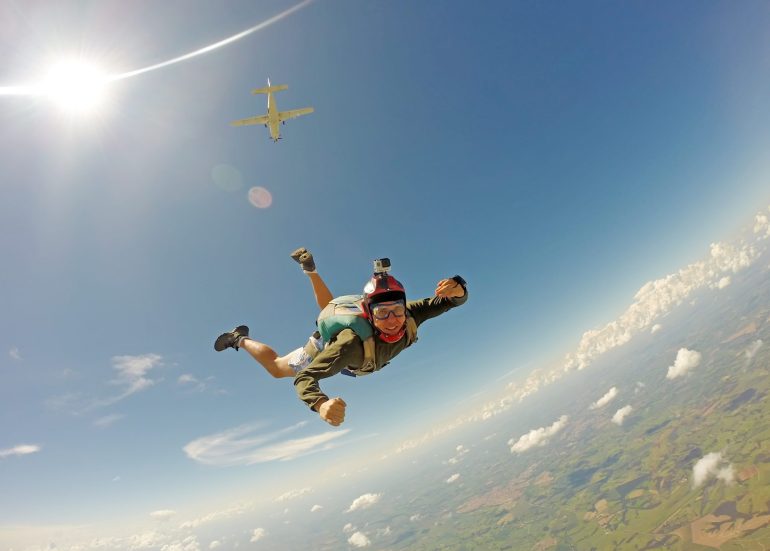 The record for the highest skydive stretches the limits of the definition of “sky”.

On 14 October 2012, Austrian Felix Baumgartner skydived from 127,852 feet, over a third of the way to the beginning of space (327,000 feet). Not only was it the highest skydive ever, but also the fastest speed reached in freefall. What’s more, Baumgartner became the first human to break the sound barrier in freefall parachute jump.

The highest skydive in tandem was at 37,417 feet. It was achieved on 25 October 2019 by James C Wigginton and Arkadiusz Majewski. 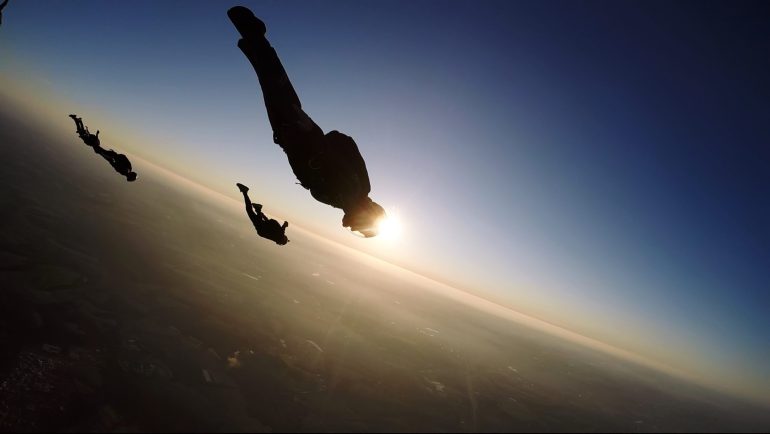 A skydiving group at the sunset (Photo: Graiki via Getty Images)

Regulated by the FAI, there are many types of competitive skydiving events. The traditional form of competition sees divers judged on the timed completion of aeronautical acrobatics. There are also competitions that involve relative work in freefall, canopy formations and accuracy tests, requiring the competitor to land as close as possible to a target.

What’s more, new events are being devised all the time. Blade running, for example, requires navigation through a course of high flags on a slope, while skysurfing is a bit like mid-air snowboarding.

What is Skydiving Training? 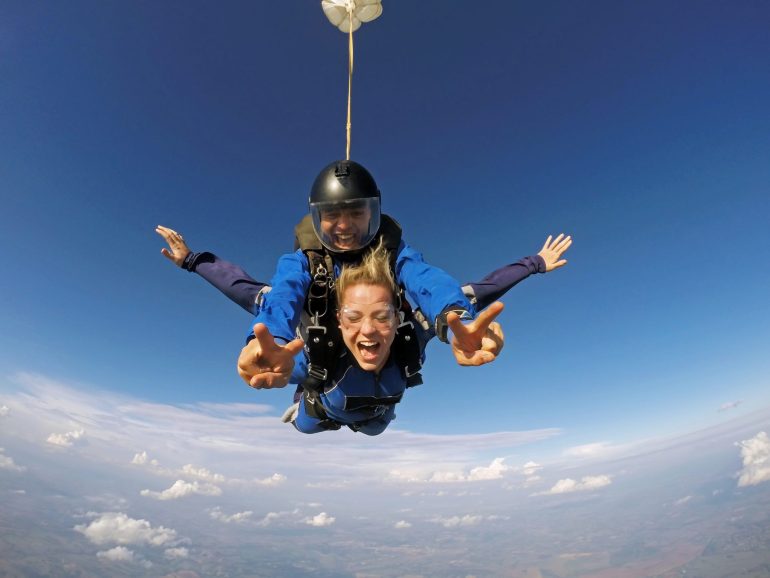 Training is vital in skydiving safely, teaching skydivers how to position their body at different times as well as steering and landing techniques.

There are three main positions that skydivers can choose from: head-down, belly-to-earth, and sitting. Head-down is the most popular choice for experienced skydivers, as it offers the greatest speed and manoeuvrability. Belly-to-earth is the preferred position for beginners, as it is the easiest to maintain and provides more stability. Sitting is a good middle ground between the two, and is often used by skydivers who are transitioning from one position to the other.

There are three main methods of skydiving training and we’ll look at each in turn, answering “what is tandem skydiving” and “what is a static line jump” as well as looking at accelerated free fall.

What is Tandem Skydiving?

Also known as tandem parachuting, this is the best known training method. So, what is tandem skydiving in practice?

Tandem skydives are where the student and instructor dive together, connected via a harness. A typical tandem jump might begin at 13,000 feet with a fall rate of around 120 mph. After about 40 seconds, the instructor deploys the parachute.

The type of parachute used is larger and of a different type to that used for solo jumps. Known as drogue parachute, it’s specifically designed for a slower descent.

What is a Static Line Jump?

It’s cheaper, but requires more ground training before the first jump. So, what is a static line jump as a form of skydiving training? Well, in contrast to tandem training, static line jumping involves the student jumping solo straight away from around 3,500 feet. However, they are not left entirely to their own devices. Their parachute remains connected to the aircraft by a length of webbing known as a ‘static line’. After two or three seconds of freefalling, this static line deploys the parachute so the student doesn’t have to.

As implied by the name, accelerated free fall is often considered the fastest of the three teaching methods. At least in terms of practical experience. Again this requires more ground training than the other two methods, but the student’s first jump is solo, untethered and at around 13,000 feet. They are, however, accompanied by two instructors gripping onto and assisting them until the student deploys their own parachute.

We’ve landed firmly on our feet. We’ve answered “what is skydiving”, learning about the history of the parachute and the sport. We’ve discovered “what is tandem skydiving” and “what is a static line jump” and even the records for highest skydive and highest tandem skydive. You could say for those interested in skydiving, it’s been a good jumping-off point.