Enabling mere mortals to soar through the air without the help of an engine, paragliding is celebrated for its simplicity. But what is paragliding in practice? And what is powered paragliding? Read on for a bird’s eye view.

Often termed the simplest mode of human flight, paragliding is a relatively new, but ever evolving air sport.

Using only a parachute-like wing to fly from cliffs or hills, paragliding is lauded for its simplicity and is often seen as one of the more accessible extreme sports.

But just what is paragliding and how does it work? What is a paramotor? And what is tandem paragliding? Let’s lift off for an overview of the subject. 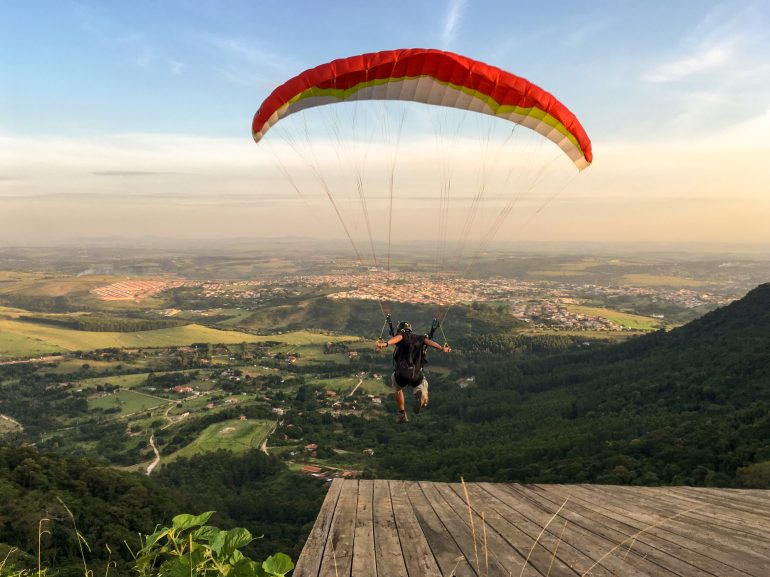 The story of paragliding begins, strangely, with space exploration. It was a NASA consultant, David Barish, who is said to have created the first paraglider in the 1960s, although it wasn’t used for that purpose. Known as the Sailwing, it was designed as a parachute to retrieve NASA capsules.

Another important step towards the creation of paragliding occurred in 1964, when Canadian-born Domina Jalbert used his kite expertise to create and patent the Parafoil parachute, which used ram-air, in other words air from movement, to inflate its multi-cell structure.

Then, on 25 June 1978, things really took off. Two skydivers Jean-Claude Bétemps and André Bohn, gained extensive media attention by paragliding off Mont Pertuiset in Mieussy, France. From there, paragliding reached ever more dizzying heights and, in 1988, the first European Paragliding Championships were held in France, followed a year later by the first Paragliding World Championship in Austria.

The first ever straight distance paragliding record was 42.96 miles, set by Hans Jörg Bachmair in 1988. The same record is now well over 300 miles. 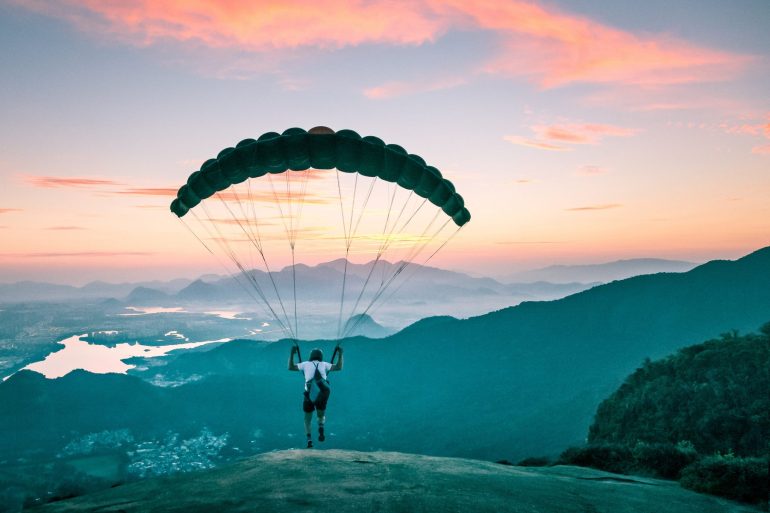 A Paraglider taking off (Photo: Ingo Roesler via Getty Images)

So, what is paragliding in practice? Paragliding, also known as parapente, involves flying a small, lightweight craft called a paraglider, usually from a high point, such as a cliff or hill, using the wind to stay aloft. Whilst paragliding originated from people modifying parachuting canopies, it has since developed into a multifaceted pastime with international competitions and specially designed gliders. Nowadays, there are many variations on standard paragliding, including towed and powered paragliding.

As for the paraglider itself, this is a lightweight, free-flying, parachute-style winged aircraft with an average span of between 26 and 39 feet. The wing or canopy is made of fabric and airfoils, and is suspended over the pilot by numerous reinforced lines, often made of Kevlar or Spectra, connected to a backpack harness they wear.

To launch, the pilot runs down a slope, thus filling the paraglider wing with air until it takes off. The paraglider flies by gravity and air currents, the pilot controlling its direction shifting their weight and using several specifically designated connecting lines as steering controls. To land, the pilot turns the paraglider into the wind, thus slowing it down until they reach ground level.

What is Tandem Paragliding

Tandem paragliding is a type of paragliding where two people are attached to the same glider. This is a bigger glider than that used for solo paragliding. The person in front (the pilot) controls the paraglider, while the person in the back is a passenger. 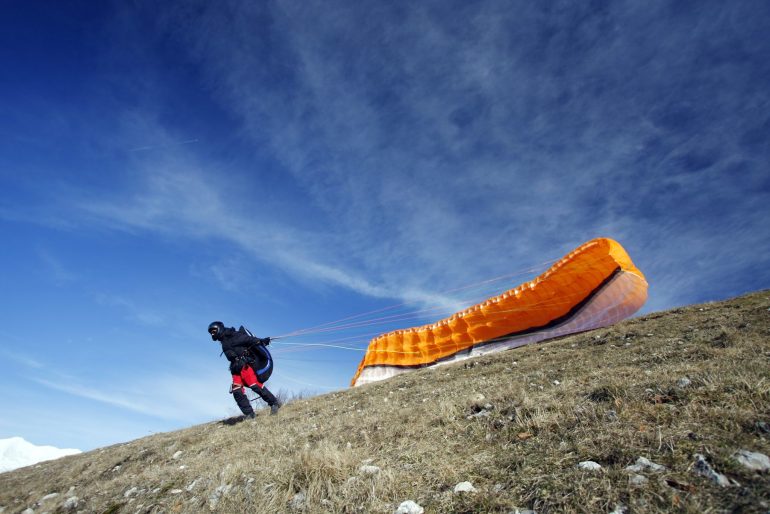 Now for the science. What is paragliding powered by? How does it use wind to fly? First, there is the launch, whereby the pilot utilises what is known as the “ram-air” effect to take off. This is where the front openings in the paraglider’s aerofoil cells are inflated as the pilot runs down a slope.

Once in the air, paragliders, like other gliding aircraft, use columns of warm, rising air or “thermals” to maintain or gain altitude. Pilots seek out these thermals, rising and descending from one to another. As long as the air around them is rising faster than the glider is descending, they will fly. In addition to thermals, paragliders can also use “ridge lifts”, which are the phenomena of air rising when it meets a large entity such as a mountain.

What is Powered Paragliding 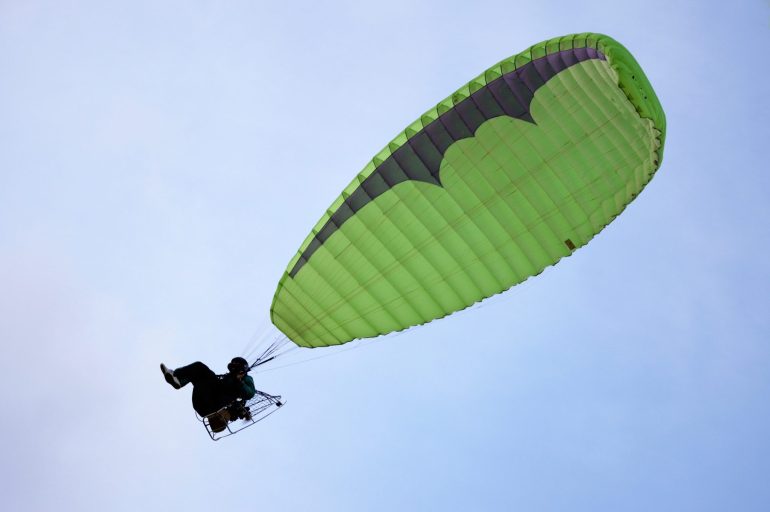 Powered paragliders can fly faster and higher than their traditional counterparts, at speeds ranging from around 15 to 50 miles per hour and altitudes of 18,000 feet, sometimes more. However, they are also heavier, sometimes up to twice the weight of non-propelled gliders.

What is a Paramotor?

The answer to “what is paramotor” is the same as that of “what is power paragliding”. They are, in fact, one and the same. Paramotoring is a term sometimes used instead of Powered paragliding.

What is Paragliding Versus Hang Gliding? 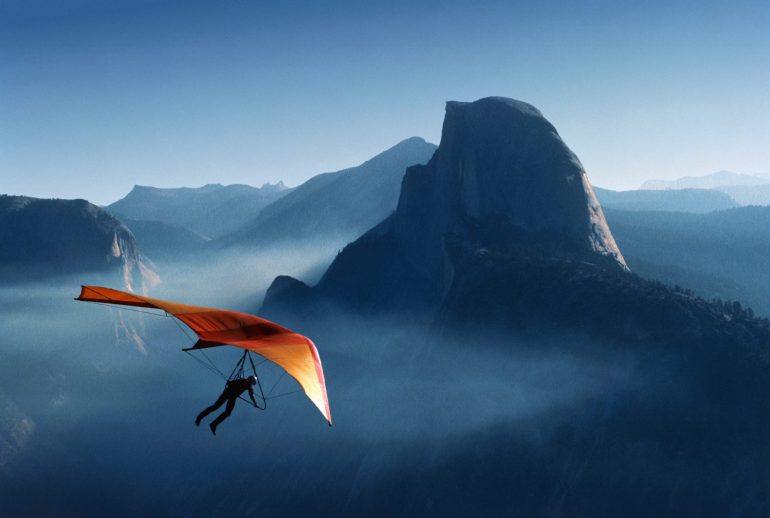 Hang gliding and paragliding share many similarities and are often confused. Both allow human flight without the aid of an engine. So, what is paragliding as opposed to hang gliding?

The first difference is in the structure of the equipment. While hang glider wings are shaped by a rigid frame, paragliders use only the wind to open up. In terms of the pilot’s position, this allows paragliders to sit, while hang gliders lie prone. It also makes paragliders much lighter, more portable and easy to set up. Paragliders usually weigh no more than 20kg, can fit in a backpack and usually take under 10 minutes to set up. A hang glider meanwhile will normally weigh over 20kg, requires a roof rack and approximately 20 minutes setup time.

In terms of practical application, while paragliding is considered easier to learn, hang gliding has the advantage of being less affected by strong winds and capable of much faster speeds.

We’ve landed on our feet, having answered everything from “what is paragliding” to “what is tandem paragliding”, even discovering that the answer to “what is a paramotor” is the same as that of “what is powered paragliding”. Hope you enjoyed the ride.